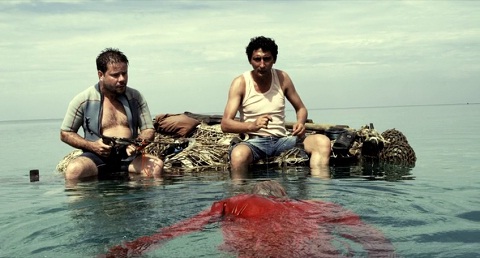 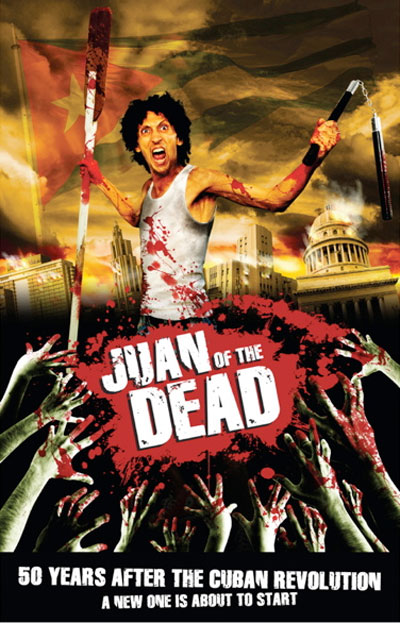 It’s very hard, at this point in time, to bring much to the zombie genre in terms of freshness and originality. AMC’s The Walking Dead brings the element of serialization to standard-issue zombie stories.  This year’s WARM BODIES gave zombiedom and the living their own spin on Romeo & Juliet, while WORLD WAR Z threw starpower at the genre.  Those two films are slated to be featured in this column later in the month, but what I’d like to talk about today is the delightful international contagion that is the zombie-comedy.  The modern zombie film as we know it — small group of besieged survivors, extreme gore, varying degrees of social commentary — was established by the parameters of George A. Romero’s NIGHT OF THE LIVING DEAD.  [More words here.] Though there were many zombie movies since, Romero perfected the art form in 1978’s DAWN OF THE DEAD.  By the 1980s, the comedy versions began to arrive.

RETURN OF THE LIVING DEAD (1985). RE-ANIMATOR (1985). NIGHT OF THE CREEPS (1986). EVIL DEAD 2 (1987). DEAD HEAT (1988). BRAINDEAD a.k.a. DEAD ALIVE (1990).  These are some of the films from what was probably the first cycle of zombie comedies.  1999’s IDLE HANDS was an overture, but the current cycle of zombie comedies probably began in full with 2003’s SHAUN OF THE DEAD.  What I like best about SHAUN OF THE DEAD, which is a very, very English movie, is that it seems to have sparked a wave of other countries to offer up their own spin on the zombie comedy genre. New Zealand got back in the game with the very funny BLACK SHEEP (about zombie sheep, naturally). Norway came with DEAD SNOW. America took another rip with ZOMBIELAND, although America never really stopped with the zombie comedies. Japan has one called BIG TITS ZOMBIE (oh, Japan). This year, India released its first zombie comedy, called GO GOA GONE. Maybe my favorite of the current wave of international zombie comedies is 2011’s JUAN OF THE DEAD, a Spanish-Cuban co-production.

For sociopolitical reasons, Cuba has never been the most prolific national cinema.  The state had a monopoly on Cuban film for many years.  Independent film in Cuba is on the rise.  This is one of many new films produced outside the state-financed Cuban Institute of Cinematic Art and Industry, made by younger filmmakers. Writer-director Alejandro Brugués is in his thirties.  JUAN OF THE DEAD is exciting in part for its novelty — it’s Cuba’s first zombie movie — but more because the sense of culture and history informs the movie’s sensibilities.  It would be an enjoyably rude film were it made anywhere, but it’s thrillingly rude because it came out of Cuba. 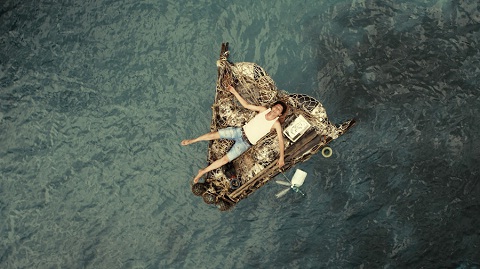 We first meet Juan (Alexis Díaz de Villegas) as he’s floating on a raft off the coast of Cuba. He and his best friend Lazaro (Jorge Molina) are looking, as always, for ways to make money. Instead, they encounter a floating corpse, in an orange convict’s jumpsuit. When the corpse raises its head to bite at them, Lazaro shoots it through the head with a harpoon gun. We, an audience with forty years of zombie movies behind us, know what’s happening right away, but Juan and Lazaro aren’t the kind of guys who watch movies like those, so they decide to keep this harpooning incident between them.

Right off the bat, there’s text and subtext going on — the subtext being that the first zombie we meet was a prisoner, probably not accidental symbolism. The text is that this is a different kind of slacker duo than we’ve seen in most movies of this time. Visually they are the classic skinny-tall man, squat-stout man combo, with Juan resembling John Turturro with  the hairstyle of a Johnny Depp character and Lazaro resembling a porkier version of Chris Pontius from Jackass with the same fondness for exhibitionism, but otherwise they’re not as ingratiating as your typical Laurel & Hardy pair.   These guys are schemers, thieves, adulterers, public onanists, and accidental murderers — and that’s just in the first ten minutes.

What’s interesting to me about this movie is that the protagonists are already desperate when the story opens.  They live in a run-down building. They’re scrambling for money at all times. They both have adult children — Lazaro has a son named Vladi who often hangs around the guys, and Juan has a daughter, Camila, who can’t stand him — but otherwise no sense of responsibility outside the natural urges of eating and fucking. So when the zombie invasion erupts, it doesn’t make all that much of a difference to them. They are so unsentimental that Juan hardly bats an eye when the married woman whose window he climbed out of earlier is turned into a ravenous ghoul.  In fact, for Juan and Lazaro the zombie invasion is more opportunity than anything else.  Less living people to compete against, for one thing.  Cause to open a new business, for another.  “Juan Of The Dead. We kill your loved ones. How can we help you today?” Juan’s motley crew includes a transvestite named La China who is skilled with the slingshot and her apparent boyfriend, El Primo, a giant who faints easily and needs to be blindfolded in order to fight zombies. Eventually Camila convinces Juan to let her fight also. There’s an ironic democracy to the zombie-killing in this film, intentionally I think. 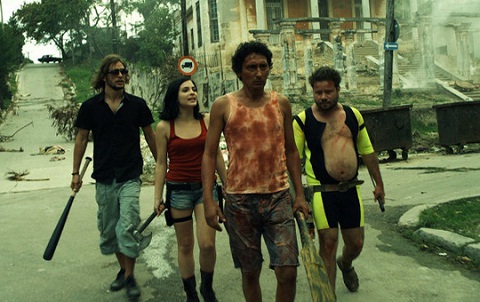 JUAN OF THE DEAD wouldn’t exist without the sum of its influences, but in many ways it surpasses them.  There are plenty of familiar references:  There’s a particular gesture towards the end that’s straight-up Bruce Campbell. Like DEAD ALIVE, there is a character who gets to say “I kick ass for the Lord!” — although that’s also the last thing he gets to say.  In the tradition of SHAUN OF THE DEAD, there is a sort of impromptu dance scene, but instead of the lead characters dancing around a zombie like a maypole to a Queen song, here we have a man doing an inadvertent salsa in an attempt to get away from the gay zombie he’s handcuffed to.  But there are divergences too.  One notable aspect about JUAN OF THE DEAD is that, particularly compared to the relatively chaste films of Sam Raimi, Peter Jackson and Edgar Wright, it’s a downright horny film. There’s nudity all over the place. Sure, a lot of it is male nudity, but that’s even more of a departure. Sex and violence are the twin demons plaguing conservative minds everywhere, yet violence gets so much more screentime in most horror movies, which, in the end, do arguably have a duty to shock and offend.  If that’s so, then JUAN OF THE DEAD gets the balance better than most. 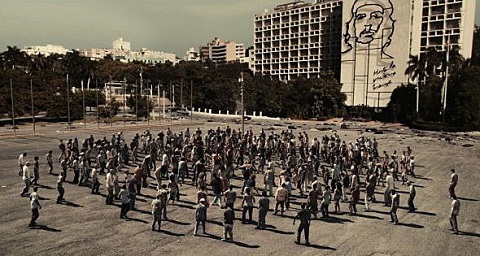 That is the best description of JUAN OF THE DEAD — a concentrated burst of much-needed rudeness, a philosophical middle finger, a well-timed fart.  These characters are unrepentant bastards.  They’re callous and foolish, using words many of us wouldn’t use and doing things all of us had better not do.  So much of good comedy is bad behavior, though, and that’s a handy signpost to keep in mind.  Agreed, sometimes the energy and exuberance of the film gets away from its makers — the running time is relatively short yet it does have moments that are episodic and dead-ended, which divert from the momentum.  It’s not a quote-unquote perfect film.  But as the first volley of potentially a new national horror movement, it’s very encouraging.  JUAN OF THE DEAD represents the casually exposed ballsack of revolution. 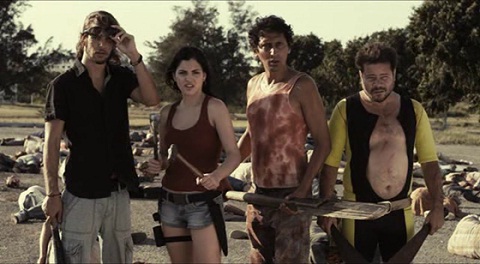 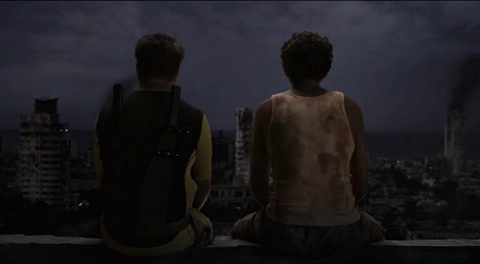 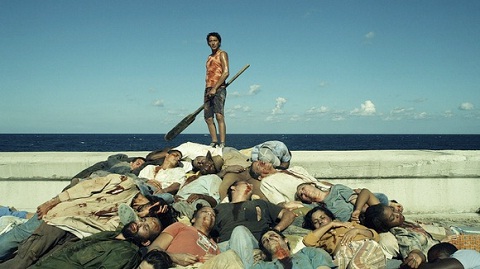