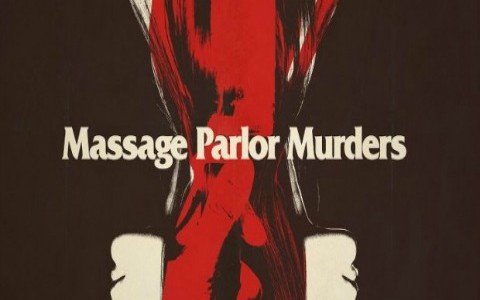 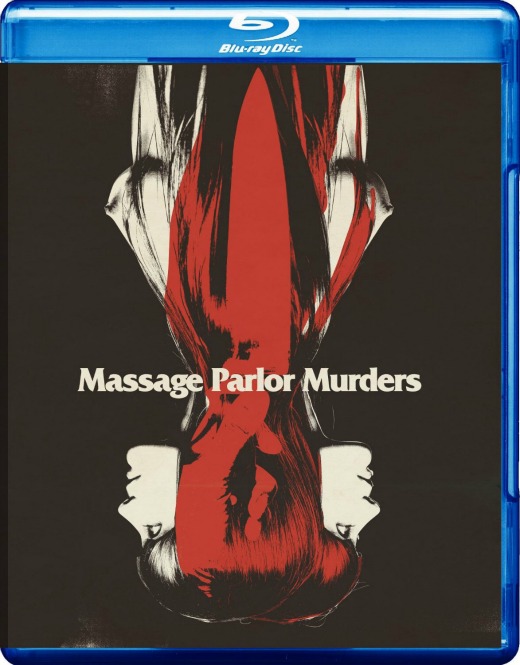 Vinegar Syndrome is only a few months into their life, and already they’ve become a huge force in uncovering some of the most neglected films in exploitation history, many of which are under the radars of all but the most determined genre buffs. It’s a risky strategy, as the films that Vinegar has brought to light thus far (including three previously unreleased Herschell Gordon Lewis sexploitation films and a pair of hardcore Anthony Spinelli films) aren’t so much cult films as genuinely obscure oddities, titles so obscure that the number of people that even knew about them prior to their DVD releases probably numbered in the triple digits.

Among their most recent public discoveries from the spelunking into the depths of worn prints and mildewy warehouses is MASSAGE PARLOR MURDERS!, a sordid little thriller shot in 1973 to capitalize in the massage parlor trend at the time. (That’s the actual on-screen title, though the punctuation seems to have gotten lost on the way to any of the film’s advertising.) Directed by Chester Fox and Alex Stevens, MASSAGE PARLOR MURDERS! has essentially been relegated to a few whispered references on cult film forums and the occasional find of an advertisement for the film under either the original title or its subsequent re-release as MASSAGE PARLOR HOOKERS. Vinegar’s Blu-Ray release brings the film out into the open for the first time in decades, and their transfer of the film serves as a revelation, unleashing a genuinely hypnotic piece of exploitation to a new generation with the utmost care. 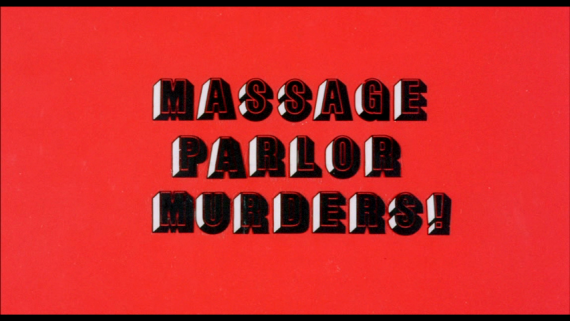 The opening sequence sets the tone of the film perfectly, as an awkward john is talked out of his pants and wallet by a masseuse (Anne Gaybis, whose cult cred ranges from BLACK SHAMPOO to playing the cashier in FRIDAY THE 13TH PART 3) in a lengthy sequence that seems to be improvised. (Oddly, the excision of this scene is the only difference between the original cut and the MASSAGE PARLOR HOOKERS cut, also included on the disc.) We soon cut to a less-jovial sequence as a different attendant (adult film regular Chris Jordan) is brutally murdered in a scene brimming with blood colored in what should really be named “Regional ‘70s Horror Red.”

Thankfully, a pair of cops are on the case, the younger, lady-loving Jimmy (John Moser) and the surly, older Danny (George Spencer) and the pair split up to investigate. Jimmy makes time with the victim’s roommate Gwen (LAST HOUSE ON THE LEFT’s Sandra Cassell) who also works in a shady massage parlor, and the two begin a music montage-inflicted courtship. Meanwhile, Danny just comes home and yells at his wife while drinking his dinner of Budweiser. It’s like a “Starsky and Hutch” episode produced by David Friedman. 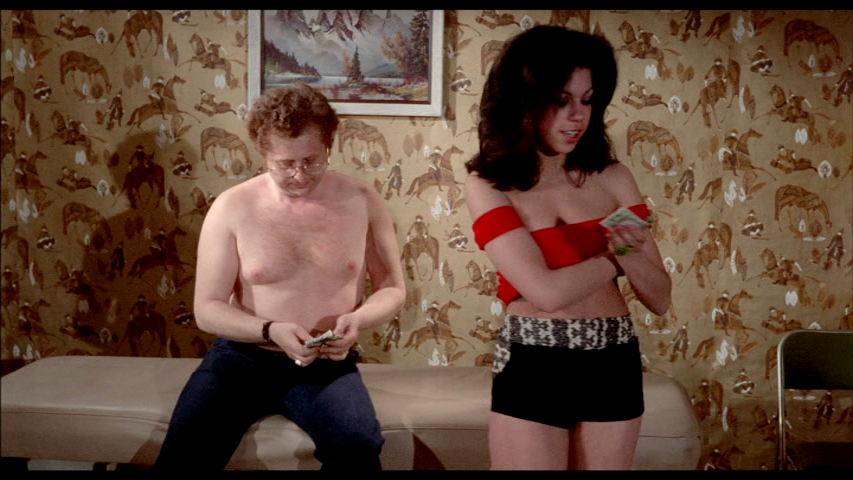 Just when things start getting to procedural, the pair visits an astrologer played by Brother Theodore, who rambles on entertainingly for several minutes. Does it forward the plot? Hell, no, but no film cannot be improved by a random appearance by Brother Theodore spouting off improvised nonsense. 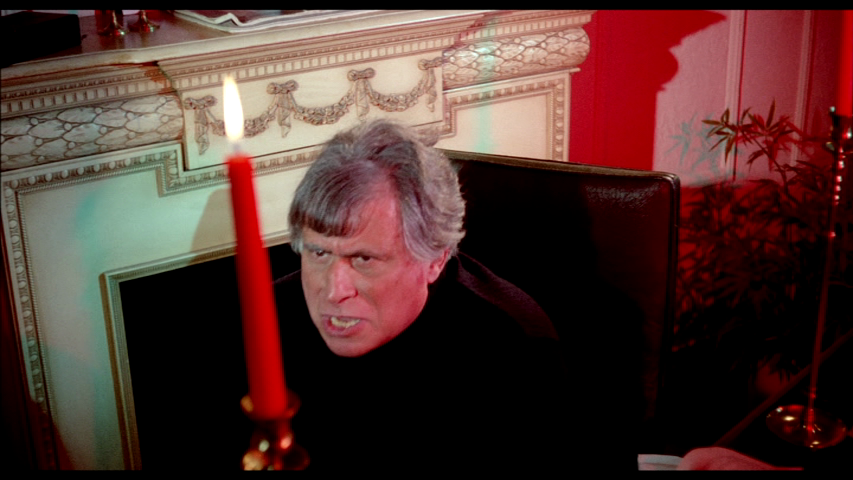 We eventually do make our way back to the actual massage parlor murders promised by the title, and knowing that Gwen’s in the industry targeted by the killer, you can see certain parts of the climax coming from a mile away. What you won’t see coming is the ending, which is the sort of out of nowhere insanity that you can only get from a low-budget ‘70s exploitation film, and it must have made even less sense to those who saw the MASSAGE PARLOR HOOKERS cut upon first release.

The combination of grittiness and garishness that fans love about the likes of the H.G. Lewis films of the time is on full display here, and the seediness of the New York City locations is well documented by the cinematography. Vinegar’s 1080p transfer of the film looks astonishing, and despite the high-def transfer, it still maintains the grainy, tacky feel that gives the film a genuine personality. I’d say it’s the best it’s ever looked, but it’s such an unknown quantity that this is probably the only time it’s looked like anything in several decades. 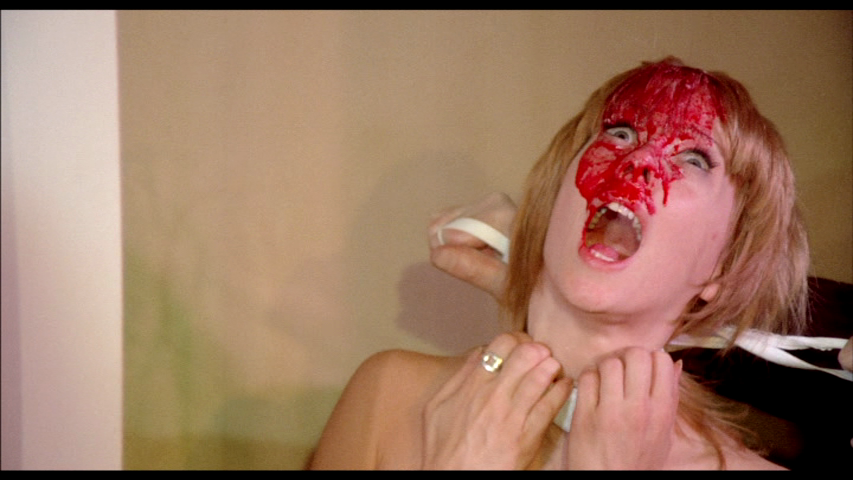 It’s no surprise, then, that the liner notes for their Blu-Ray/DVD combo release of MASSAGE PARLOR MURDERS! are written by Chris Poggiali, editor of the long-running “Temple of Schlock” fanzine and longer-running blog of the same name. Poggiali has specialized in the deep depths of exploitation obscurity, dredging up titles, ad campaigns and articles on films long lost to even the greyest of grey markets, and his liner notes delve as deep as one could hope into the makers of MASSAGE PARLOR MURDERS! chronicling the producers, directors, performers and the spotty distribution history of the film itself. It also makes sense that we see characters discussing SHAFT’S BIG SCORE at one point, as MPM! director Alex Stevens was BIG SCORE’s stunt co-ordinator.

It’s a worthy read that serves as a fine bonus feature to the film, serving as a fine substitute for a commentary track. Other extras include a radio spot and trailers for the original release and the MASSAGE PARLOR HOOKERS release, which sells it as a pure sexploitation picture, and eight minutes worth of outtakes from the film, mostly consisting of the leads wandering around Times Square. While shot without sound, these moments are still fascinating to watch as a portrait of a place long gone from popular culture. 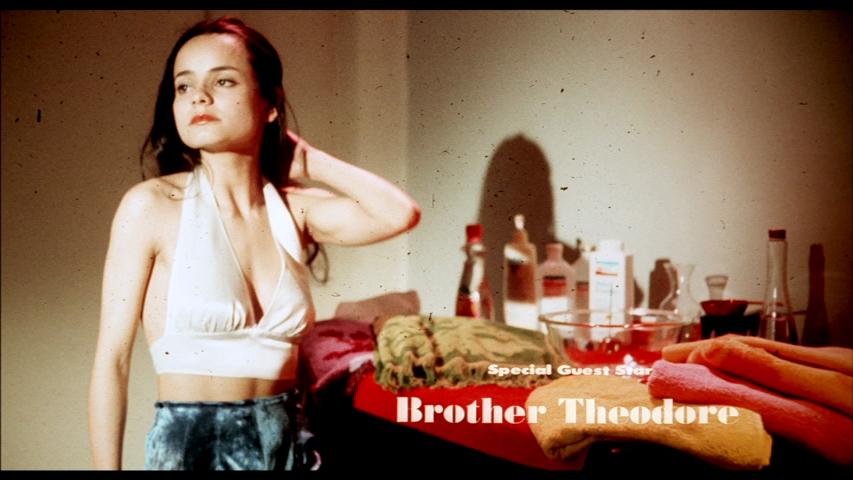 Vinegar Syndrome deserves a huge amount of credit for their release of MASSAGE PARLOR MURDERS!, not just for the restoration of a film in a great package, but for taking the risk of releasing it at all. It’s a hugely entertaining, grimy undiscovered classic that exists in a logical plane that only a low-budget exploitation film of the era can offer, and there’s no reason that a self-respecting fan of the likes of BLOOD FEAST or MARDI GRAS MASSACRE shouldn’t pick this one up immediately.