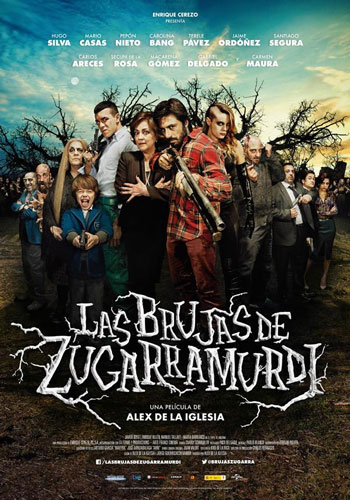 Look, I love Álex de la Iglesia. My first experience with his 1992 action/science fiction/comedy ACCION MUTANTE was an absolute revelation, and I’ve been very pleased to see that his recent success with 2010’s THE LAST CIRCUS has brought him some significant attention and a larger audience. He’s a fascinating, original filmmaker who capably dips into a variety of genres – action, horror, science fiction, spaghetti western – with reckless abandon. He’s the sort of director we need more of, and WITCHING AND BITCHING had the potential to finally “break” him in North America. 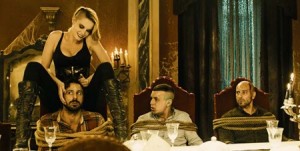 But it’s, sadly, not very good, and it’s a little difficult to understand why. Iglesia (and regular collaborator Jorge Guerricaechevarría) have a concept that’s rife with potential, and appears to be working with his largest budget yet. He has a wonderfully game cast – including Almodóvar regular Carmen Maura – and the horror/comedy genre is right in his wheelhouse. So, it’s rather distressing to report that this is an often flavorless slog of a film that begins with a bang before quickly extinguishing any goodwill via endless, tiresome conversations. Things kick up a notch in the second half, but the CG-assisted mayhem is never quite as gripping as the film seems to think it is. In short, it’s all a bit.. boring.

I know! I’m as surprised as you are. It all begins so well, with divorced dad José (Hugo Silva) knocking over a Cash4Gold store while dressed as Jesus Christ (in silver body paint!). José and his partner – as well as his son – hijack a taxi and head towards France, but soon get mixed up with a sadistic coven of witches who gleefully accept the men as a sacrifice, leading to some cannibalistic hi-jinx before José is assisted by an attractive young witch who has fallen for him (played by Iglesia’s partner Carolina Bang). Aspiring towards a FROM DUSK TILL DAWN-type mix of genres, the first half drags on interminably, and the film never quite recovers.

Even worse is the film’s primitive view of male/female relationships, and while it’s all played for laughs there’s an unpleasant mean streak towards women that simply leaves a bad taste. The “small town with a secret” (and appearance by Carlos Areces) aspects somewhat resemble Juan Martínez Moreno’s LOBOS DE ARGA (aka GAME OF WEREWOLVES), but even that film was able to maintain its energy until the end. Here things aspire to insanity, but some iffy special effects and weak pacing makes for a ponderous finale.

Iglesia fans may still find a lot to enjoy here, but WITCHING AND BITCHING is a disappointment.