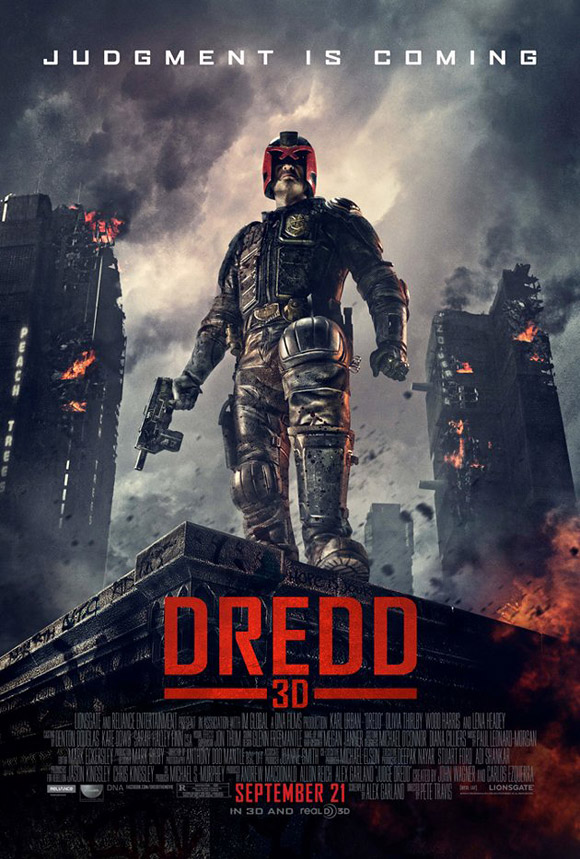 If I willingly concede that the new movie DREDD benefits greatly from diminished – even non-existent – expectations, will you not accept my verdict that it’s a big bloody heap of fun, and get willing to go give it a chance? If the answer is yes, then welcome to my review. Come on in, grab a snack, get comfortable. You’re an open-minded sort, and my kind of people. (If the answer is no, then we got problems, you and me. But we’ll get into that later, if need be.)

Because the world apparently needs contrarians, there are those who would argue that DREDD had its work cut out for it improving on the last on-screen Judge Dredd movie, 1995’s JUDGE DREDD. That one was directed by Danny Cannon, who has since retreated to directing bad TV, and more infamously, it starred Sylvester Stallone as the title character. JUDGE DREDD suffered from that early-1990s malaise that afflicted several Stallone (and Schwarzenegger) vehicles – they always had their one-liners and dark comedy, but somewhere towards the end of the ‘80s, things took a broader turn. Bruce Willis and DIE HARD really must have fucked those guys’ shit up. Anyway, that’s how you end up with Rob Schneider in a JUDGE DREDD movie. And Armand Assante as (an admittedly well-cast) Bizarro Stallone). And a Judge Dredd who, to the horror of all of his fans, runs around with his helmet off. A travesty though depending on where you stand on the scale of comic-book-fanatic to Derek Jeter, it’s more or less of a grave one. 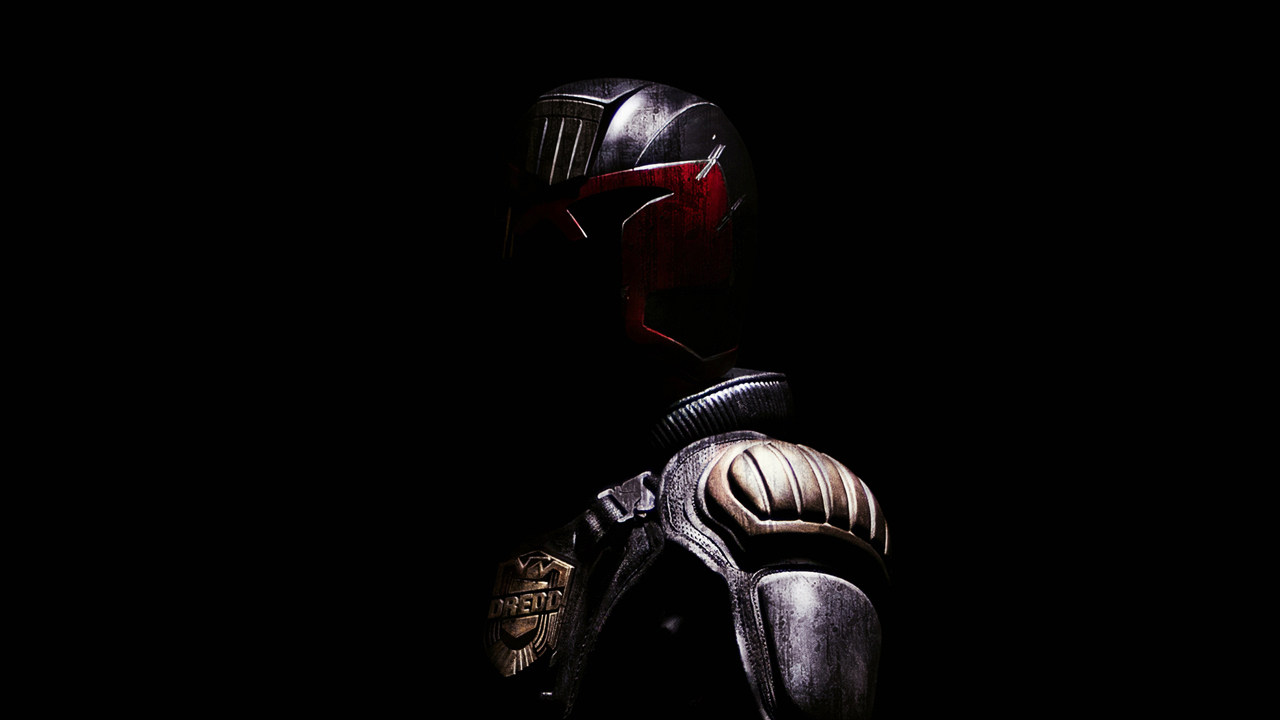 Comic-book-fanatics don’t need me to explain who Judge Dredd is, but on the off chance that a pro-athlete is reading this, here’s a quick summary: Writer John Wagner and artist Carlos Ezquerra created Judge Dredd in 1977 for the British comics anthology 2000 A.D. – this series showcased early work from a deep roster of now-legendary British talent including Brian Bolland, Steve Dillon, Garth Ennis, Neil Gaiman, Dave Gibbons, Alan Moore, Grant Morrison, and John McCrea. Judge Dredd is the most popular character to have emerged from that book, and it’s easy to understand why: He’s basically DIRTY HARRY meets ROBOCOP.

Judge Dredd polices the post-apocalyptic urban wasteland of Mega-City One, an over-populated and crime-ridden metropolis that requires a stable of peacekeepers known as the Judges. Unlike the police we know, these Judges pass sentences on the spot, and many times the verdict is death. Dredd is just a man, but he’s a one-man army, equipped with a “Lawgiver” pistol based on a concept that predates modern videogames by decades, as it can cycle through a variety of lethal functions on command. And he never removes his helmet, not ever. Why would he? He’s always at war. Didn’t you see what happened to the guy in SAVING PRIVATE RYAN who took off his helmet?

My guess is that Judge Dredd is to British comic fans something like what Spider-Man is to American comic fans, a flagship character. It’s not for me to determine how accurate DREDD is to the comics. There are many who could do that better. But from what I know of the comics, and from what I like about the comics, this feels closer to right. It certainly makes Sylvester Stallone in JUDGE DREDD look as silly as Chuck Norris looks in THE EXPENDABLES 2. A poser.

The new Judge Dredd is Karl Urban, an up-and-coming action star who has been seen in THE LORD OF THE RINGS, THE BOURNE SUPREMACY, and 2009’s STAR TREK. The guy looks like Brad Pitt. It’s probably not a simple business decision for him to spend an entire movie with most of his face obscured by a giant helmet, but he does it, with a complete lack of vanity and a thorough determination that pays off. He gives nothing but grit and glare, which ironically makes the character compelling. You’re looking for flickers of emotion there, in a way you wouldn’t be so focused otherwise. Judge Dredd is a big goon in the comics – I like the idea of a character who’s so resolutely one-note that you’re straining to look for any degree of shading.

Dredd in this movie functions something like Denzel in the early scenes of TRAINING DAY, and luckily for you guys, this time around Olivia Thirlby takes the Ethan Hawke role. She plays rookie Judge Anderson, a major supporting character from the comics, who is a special prospect due to her telepathic abilities – she can read perps’ minds, which is a useful talent but at times is an ugly place to be. Olivia Thirlby nicely plays the diminishing innocence of the character, as she is thrown in the deep end of the meat-grinder with Dredd. Dredd and Anderson are investigating the gruesome triple-deaths of some drug-dealer-types at Peach Trees, Mega-City One’s projects.

The three lowlifes were skinned alive and thrown off the half-mile-high balcony of the hideout of a female kingpin known as Ma-Ma, underplayed beautifully (or hideously) by Lena Headey. She’s soft-spoken yet intimidating, compelling yet viciously ruthless. This is the most interesting female villain I’ve seen since Salma Hayek in the otherwise-flawed SAVAGES. This broad’s so bad she’s got Avon Barksdale working for her! (By which I mean Wood Harris from The Wire plays a key underling, and he’s good in the movie too.) Once Ma-Ma finds out that two Judges are in her building, she puts the place on lock-down and calls for their heads.

If it sounds like you’ve seen a movie with a similar set-up recently, that’s because you probably have. If DREDD were released a year from now, we could wonder if it were just aping THE RAID. As it is, it’s probably more of a case of great minds thinking alike. Is DREDD anywhere nearly as visceral and brain-slamming as THE RAID? I guess not. Am I still happy that I got to see an alternate-universe version of THE RAID with Judge Dredd in it? Fuck yes. It’s ROBOCOP meets DIRTY HARRY meets THE RAID. (With a little bit of MAGNUM FORCE for the bit with the four corrupt judges.) If it’s not winning points for boundary-pushing conceptual originality, it’s still a whole lot of nasty fun. There are some acts of violence inflicted upon human bodies in this movie that I took an almost-scientific interest in because I don’t think I’ve ever seen their like in a movie before, and if that’s not a vote of confidence in the movie, it’ll be interpreted as one anyhow. Some of the credit for that gruesome innovation will go to screenwriter Alex Garland (28 DAYS LATER, SUNSHINE), and some will go to director Pete Travis, and then some should definitely go to the relentlessly creative cinematographer Anthony Dod Mantle, who shot films as different as 28 DAYS LATER, MILLIONS, THE LAST KING OF SCOTLAND, SLUMDOG MILLIONAIRE, ANTICHRIST, and 127 HOURS. If for no other reason, DREDD deserves a look for all the opportunities it affords Anthony Dod Mantle to play with comic-book carnage. 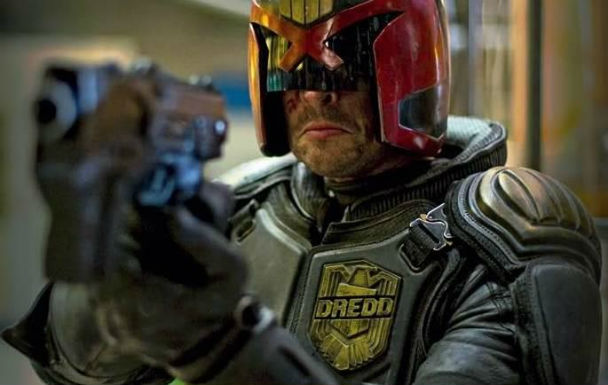 If there are valid criticisms to DREDD, they’d include the arguments that the filmmakers take a lot of time to indulge in the effects of the “Slo-Mo” drug Ma-Ma is peddling (it’s a barbiturate that makes the user experience life at a fraction of its speed, with a sparkly side-effect.) You couldn’t call this movie entirely anti-drugs.

It also frequently slows down pacing-wise, usually to linger over the admittedly-terrific production design by Mark Digby. And in keeping with the source material, it doesn’t exactly agonize over the sociopolitical consequences of ultraviolence. Again, I’m not complaining, but some might.

It seems strange to describe a movie this violent and tongue-in-cheek as also classy, but it does maybe the classiest thing I’ve ever seen a comic-book movie do: The first name credit that comes up when the movie’s done is a huge red “Created By” for John Wagner and Carlos Ezquerra. That suggests that DREDD is a movie that cares about its fans and is working hard to deliver what they want. And that noble ambition wouldn’t even matter much if it hadn’t followed through. But it does. I had a great time with the movie. I was expecting nothing, and I got plenty. DREDD is worth seeing, and theatrically. Better hurry.