Home  ⁄  The Wire  ⁄  FLIGHT PLANS: PLAYWRIGHT DAVID CERDA’S “THE BIRDS” FLOCKS BACK TO THE STAGE

If you’re a Chicago-area fan of cult films and a regular theatergoer (of the “legitimate” variety), the odds are pretty good that you’ve seen a production with some David Cerda involvement. The performer and playwright has made a name for himself by re-imaginging classics of camp cinema ranging from THE POSEIDON ADVENTURE to TROG as lavish, over-the-top stage productions though Hell in a Handbag Productions or the now-defunct Sweetback Productions. Some even feature the inclusion of musical numbers, including “sCarrie,” a gleefully deranged musical based on Brian DePalma’s CARRIE, a production very distinct from the more commonly-known serious Broadway musical take on the original material. (It’s not surprising that Cerda also performs as part of the band The Joans, a rock group he founded that brings the camp legacy of Joan Crawford to the world of rock and roll. ) 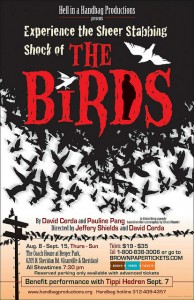 With collaborator Pauline Pang, his latest effort is a revival of Alfred Hitchcock’s “The Birds,” a stage production that Hell in a Handbag Productions had previously mounted in 2001. The revived show, starring Catherine McCafferty as Melanie Daniels, opens this weekend at the Berger Park Coach House in Chicago, and a benefit performance next month will feature an appearance by Tippi Hedren in person. (It remains to be seen if Cerda can convince Hedren to come back for a stage version of ROAR.)

We had a chance to talk with Cerda via e-mail about his productions, influences, and his own particular notes on “camp.”

P: How did you first get the inclination to produce stage versions of camp classic films? Was POSEIDON! AN UPSIDE-DOWN MUSICAL the first production you wrote along these lines or just the first produced?

D: The first stage treatment of my favorite film was called SUPER PUSSY VIXENS. GO FASTER! KILL!. It was a lot of FASTER, PUSSYCAT! KILL! KILL! combined with other Russ Meyer films. I did it with Sweetback Productions about 16 years ago.

P: What films would you love to adapt that you haven’t yet done?

D: I have a wish list, but ultimately, I have to be inspired and then I have no choice in the matter. There’s THE HIDDEN, a weird campy 1987 sci-fi piece. BABY, a made for TV film with Ruth Roman. THE INITIATION OF SARAH, a great CARRIE Made for TV rip-off with Morgan Fairchild… AIRPORT ’75. Gee, a million things. I have been working on a SHOWGIRLS piece forever, and even a MOMMIE DEAREST musical, because so many people have asked for those things. 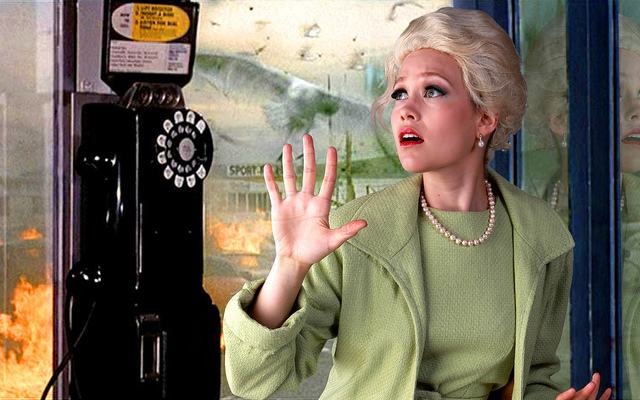 P: Are there any new surprises that you’ve changed from the original production?

D: Yes, of course! It’s a bit weirder. More Alice ‘through the looking glass’. Also, we have an amazing puppeteer working with us on the show, Lolly Extract and Amber Marsh. They created the pieces for Scooty and Jojo’s “Alien Queen” show [A great Chicago-based stage remake of ALIEN and ALIENS featuring the music of Queen].

P: How was Camille Paglia’s take on the film influential to the script?

D: I wanted to write a parody of the show, and originally it was just going to be like my Carrie parody, ‘SCARRIE’. Just a lot of laughs, commenting on the film, but once I started doing research and learned about Hitchcock’s obsession with Tippi Hedren, I knew we it was going to be a lot darker than any other shows. Finding the Camille Paglia book was just like hitting the jackpot. It’s the geekiest, over the top, love letter to the film, and Tippi. Pauline Pang and I loved it so much we made her a character in the play. 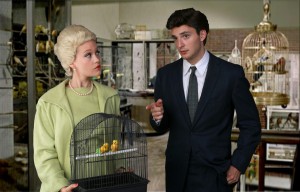 P: How did Tippi Hedren hear about the show? Has she seen it in person?

D: She was in the area in 2001, the first time the show was produced with Sweetback Productions and changed her plans to come and see it. She fell in love with show and saw it again in 2007 and she is coming to see it this year as well. She also saw the Los Angeles production and helped promote it.

P: How familiar would you say audiences should be with the source material to fully enjoy the show? For something like POSEIDON or THE BIRDS, it seems like less of an issue than, say, TROG.

D: It can be an issue. More people know THE BIRDS and CARRIE and even THE POSEIDON ADVENTURE then they do TROG, and the attendance records reflect that. However, I have had many younger people tell me they never saw the original POSEIDON ADVENTURE but loved our parody. Being familiar with the source material helps magnify your enjoyment of the piece tremendously, but it is not mandatory. We get a lot of film buffs that appreciate our attention to certain details. I just put in what I would want to see. 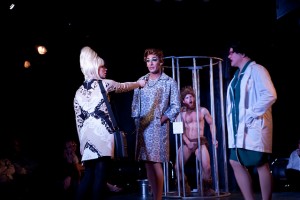 P: Do you worry about some films being not well-known enough for enough of the audience to “get” all of the jokes about them? I’m thinking things like the Richard Dreyfuss reference in [the Cerda-written stage version of] VALLEY OF THE DOLLS [for Sweetback Productions].

D: I wrote the Jacqueline Susann monologues for that and played her. I just doctored the script a bit. TJ O’Brien, who played Carrie and Neely O’Hara adapted the film into parody. But, we love to include things that maybe just a few savvy film geeks will appreciate.

P: How to you go about delivering such large, campy material in a relatively small location?

D: With the utmost conviction!

P: What’s the biggest challenge you’ve had to deal with when adapting a film?

D: Not taking the easy and obvious route. Of course, once in a while… Sometimes you run into legal matters. I got a cease and desist with my latest drag SCARRIE parody because they are trying to market the super serious Carrie The Musical. Mine is a parody, but it just was not worth the time and money to fight this time…

P: What can we look for from Hell in a Handbag in the future?

D: “Christmas Dearest,” a Christmas Carol with Joan Crawford is next, and next year we are remounting “Caged Dames,” my musical inspired by CAGED. I have a few things I have been working on but I don’t want to jinx them!

P: Does the term “camp” bother you at all? How do you define it personally?

D: Not at all. I wear the CAMP word as badge of honor. John Waters was ahead of his time in that mainstream entertainment has become rather disgustingly campy. Reality television and blockbuster films are so ridiculous that what have to really turn up the ridiculous level to differentiate what we do from real life.

Personally, CAMP is just high drama in drag. A way of life.

“The Birds” opens August 8, and runs through September. The special benefit performance featuring Tippi Hedren will be staged September 7. For tickets, go to Hell in a Handbag’s website here. 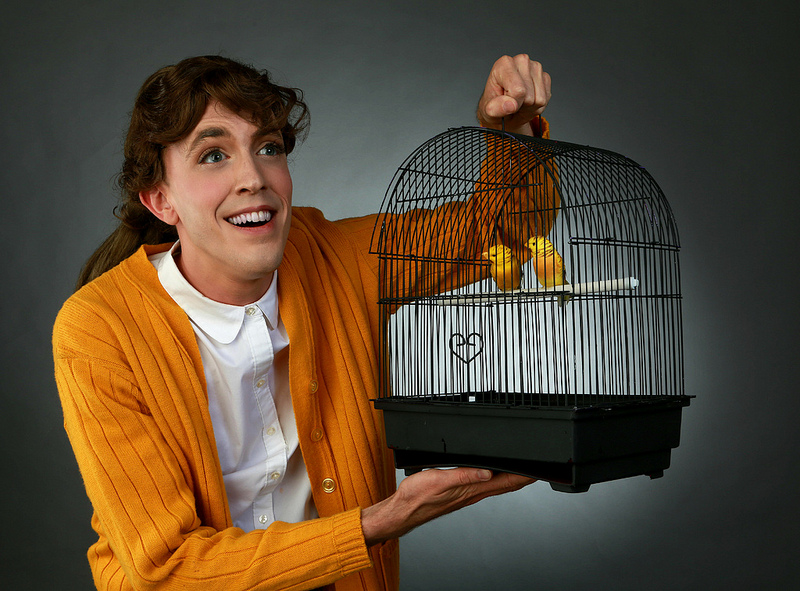