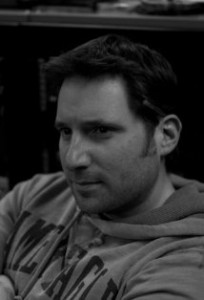 Cary Hill’s journey to making his first feature was a lengthy one. Having graduated from University of Pittsburgh in 2004, the writer/director has been dabbling in local commercials and music videos for nearly a decade, with SCREAM PARK being his first opportunity to let loose with a manic, twisted tribute to 80s slasher films. With a number of projects on the horizon, Hill took some time to chat about his attempts at crowdfunding, how he got some very recognizable faces into his cast, and the difficulties of shooting in a theme park after dark.

Sweetback (SB): SCREAM PARK takes full advantage of its amusement park setting in the great tradition of fun-house horror. Did you develop your script knowing you could get access to Conneaut Lake Park for filming, or did you develop the concept and then go looking for a park to shoot in?

Cary Hill (CH): The whole process worked backwards. The concept for the film was the amusement park, which I then built the script around. Initially we had no access to any amusement park. For budgetary reasons, the film needed to take place primarily in one location – what made it tough was that my one location had to be an amusement park. So when the script was done, the search began for an amusement park willing to let us film inside. Conneaut Lake Park was not only willing, but fit the bill perfectly in terms of what we were looking for aesthetically.

SB: What about the setting appealed to you?

CH: The amusement park setting allowed me to play with convention. The original thought that brought about the concept still hangs with me: I was in a Great America in California at Halloween time and the park was full of fog and people in masks. A friend of mine who was with me remarked that there could be a real-life fiend behind one of those masks and we’d never know. That statement just unnerved me because it seemed so believable. It also gets to play on conventions because an amusement park is something we usually associate with enjoyment and nostalgia – the same way people feel about the 80s horror genre as a whole. So we took something that invoked a good, memorable feeling and populated it with violent, repulsive characters who victimize innocent people. It makes people’s fondest memories haunted and terrorized.

SB: Your antagonists have certain visual (and performance) similarities to Chop-Top and Leatherface from THE TEXAS CHAINSAW MASSACRE 2. Was this an intentional nod to Tobe Hooper (who perhaps did the ultimate amusement park horror film: THE FUNHOUSE), or was the dynamic between the two a coincidence?

CH: There are a lot of intentional and unintentional nods to horror films throughout. The killer duo was more inspired, however, by the backwoods couple from John Boorman’s DELIVERANCE and the characters of Lenny and George from Steinbeck’s “Of Mice and Men”. I was looking for a pair of violent mountain men type that took no issue with hunting people as they do wildlife. That being said, Ogre is good friends with Chop-Top himself, Bill Moseley, and there could certainly be some of his friend in his performance.

CH: The schedule was very grueling. The cast and crew all had day jobs and had very limited time to dedicate to the film. We were also racing against the park’s renovations and summer opening. The first stretch of principle photography was sixteen days straight, which I’ve learned never to do again! We prepped every day as the sun went down and the renovation crews left the park. By nightfall, we were rolling and we rolled till the birds started chirping in the morning. In fact, they became a common nuisance as they’d show up in the soundtrack while we were reviewing footage. My own personal schedule was incredibly demanding as I was a producer by day (getting schedules straight, taking care of logistics, etc) and director by night…it left very little time to sleep.

SB: You raised money for SCREAM PARK via an indiegogo campaign. How successful was that, and what are your thoughts on crowdfunding in general?

CH: IndieGoGo was moderately successful. We did not reach our goal, but we did raise enough money to afford Doug Bradley; which, in turn, allowed us to shoot his scene and later use it to raise more funds. We did a Kickstarter campaign and actually reached over 200% to goal, allowing us to complete the film.

Crowdfunding is a mixed bag. It’s allure is that it looks simple to raise money, and by connecting with fans you can fund anything. It’s more complicated than that, and there is a ton of work on the back end. Campaigns take a lot of prep, and you have to constantly work them for the entire duration. It’s a balancing act to get the work out – but not annoy people by constantly talking about it. You also lose a sizeable amount to fees and taxes, and you have to spend some of the money on promised rewards. I recently spoke with actor/producer Tom Malloy, author of Bankroll: A New Approach to Financing Feature Films, and he was of the mind that it’s actually more work to crowdsource a film for less money than to actually find and approach investors directly.

SB: I’m sure most horror fans would be initially drawn to the film because of appearances from HELLRAISER‘s Doug Bradley and Nivek Ogre of Skinny Puppy and REPO: THE GENETIC OPERA. How did you get these two on-board, and what was it like working with two legends on your first feature?

CH: Doug I had met at a convention, Texas Frightmare, in 2011. We chatted briefly and I approached him about the project. As luck would have it, Doug was in the process of moving to Pittsburgh where we were looking to shoot. Sometimes the chips just fall that way. He didn’t have to travel far and his scene was done in one day. Ogre was approached via social media (of all things) and his agent requested the script. Ogre read it and got back in touch with us a week later: he loved it and wanted to commit to the role.

Both were amazing to work with, and each brought their own experiences and thoughts to the table. Collaborating with them was one of the most fascinating things about the production – especially on my first feature. They also both have a wicked sense of humor, so we got on fine! 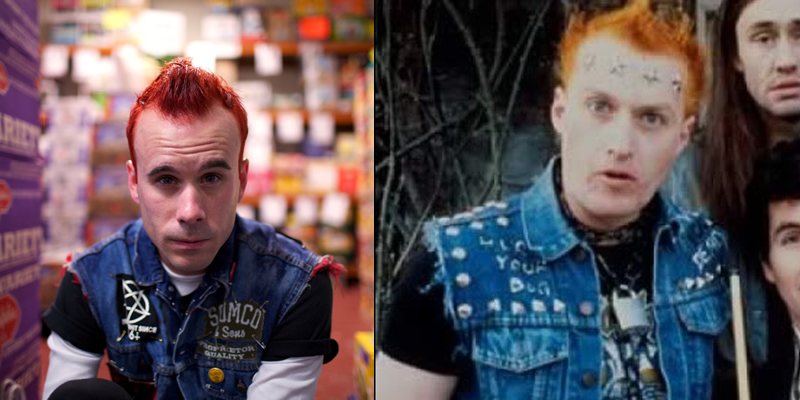 SB: This might seem like an odd question, but is Kyle Riordan’s Roy meant to be dressed like Vyvyan from the classic british sitcom THE YOUNG ONES? The visual similarity is startling.

CH: It is an odd question, but an amazing one! I’m not familiar with the show so I looked up the character and, incredibly, they have a resemblance! Kyle worked with our wardrobe director Liz Rishel in putting together his outfit. It’s completely customized and Kyle brought some of his own accessories in. His punk character worked to reference the 80s punk scene in general, and one of the punk kids from RETURN OF THE LIVING DEAD, more specifically.

SB: You’re credited on IMDB as the writer for the upcoming WWII action film BATTLE OF ATHENS. Is that your next project? What else should we be looking for from Cary Hill in the future?

CH: It’s one of several plates currently spinning. Battle is getting most of my attention, because I find it the most interesting. It’s based on a true story that happened in Athens, Tennessee in 1946. I’ve got several other projects in various stages, and recently was approached to produce an episodic webseries. And with all that, I’m always writing.

SB: For those looking to pick up a copy of SCREAM PARK or keep up on your future work, what’s the best way to do so?

CH: The film will be available on April 22 through Walmart, Best Buy, and Amazon. I look forward to buying my own movie at Walmart.

We’ve also been approached for a few more film festivals later this year. As far as future work, Facebook, Twitter, and IMDB are the best ways to stay tuned!

CH: I recently watched CRYSTAL LAKE MEMORIES, a series produced by Thommy Hutson, and it was nothing short of incredible! It’s roughly 6 hours and I watched it straight through. Very well done and very thorough. A must for any horror fan.

SB: Finally, since SCREAM PARK was credited as your first feature length project, I was wondering if you had any advice for other young or inexperienced directors looking to tackle their first feature.

CH: I can echo so many other famous filmmakers by stating the stark truth: If you want to make movies, then go out and make them! I will take it a step further and say that no matter what, do not give up. My experience has shown me that there will be hurdles and barriers thrown up to try and slow you down. The only way to make a feature film is to not stop and crash right through. Find a way. You’ll be much better off for it.

SB: Thanks again for your time, and the best of luck in the future.