Richard Stanley is a drastically-underrated director (and fellow Sergio Leone) enthusiast from South Africa whose work has been ripe for rediscovery for a while now. He’s finally getting that chance, since this weekend, Nitehawk Cinema in New York and the Cinefamily in Los Angeles are showing LOST SOUL: THE DOOMED JOURNEY OF RICHARD STANLEY’S THE ISLAND OF DR. MOREAU, a documentary about the calamity surrounding the 1996 film starring Val Kilmer and Marlon Brando from which Stanley was booted and replaced by John Frankenheimer.

I’ve seen THE ISLAND OF DR. MOREAU, but there’s very little there to indicate the unique vision of this unusual talent. Better for the curious among you to see Stanley’s 1992 eerie horror-Western DUST DEVIL, or his debut feature, HARDWARE, which I happened to finally get around to back in 2012, during the same weekend I saw the new DREDD movie. It turned out to be an apt double-feature.

From where I’m sitting, there aren’t many movies as true to the post-punk 2000 AD comic-book aesthetic as these two movies — DREDD and HARDWARE — although my friends in the UK will definitely have more trustworthy opinions on the matter. In point of fact HARDWARE is based on a short strip from 2000 AD, the same series from whence Judge Dredd arrived.  It actually is literally derived from a specific Judge Dredd storyline!

This is the basic pitch:  A trenchcoat-rocking soldier named Moses (played by Dylan McDermott) purchases the wreckage of a robot that has been found in a post-apocalyptic desert, and brings it back to the apartment he shares with his sculptor/artist girlfriend Jill (played by Stacey Travis). How thoughtful! But while Mo is out, the robot activates, and attempts to murder Jill in her apartment.

Take a look at this thing: 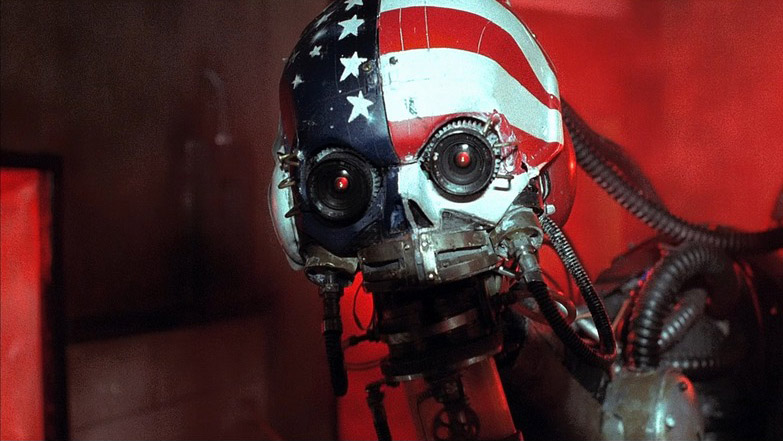 It may visually call to mind the more rickety Terminator of 1984, but this guy’s got some even nastier moves than that cyber-Schwarzenegger had. He’s one seriously creepy customer.

The deceptively-cheap movie — it’s stylish and relentless and looks like plenty more than the one million bucks it reportedly cost — is almost entirely about this battle, between Jill and this nightmarish future machine.

Along the way, HARDWARE manages to make time for excellently bizarre and/or disturbing performances by veteran character actors John Lynch (BLACK DEATH), Mark Northover (WILLOW!), and most unshakably, William Hootkins (Porkins in STAR WARS, Major Eaton in RAIDERS OF THE LOST ARK, Eckhardt in BATMAN) as maybe the grossest movie pervert ever. I do not make such pronouncements lightly. Believe me.

Rock legends Iggy Pop and Lemmy also briefly contribute their talents, but even with all that craziness surrounding the main action, HARDWARE all comes down to Jill and her fight to stay alive under attack by that freaky, ferocious robot.  It plays out, under Stanley’s innovative direction, as an intensely tangible experience, despite how it initially springs out of such a totally bonkers sci-fi set-up. If you love post-apocalypse fever dreams and bugged-out robot villains, HARDWARE is a movie you’ll want to take a look at.

HARDWARE is available for purchase on Blu-Ray and DVD from Severin Films, and it is screening tonight at the Alamo Drafthouse in Austin, Texas.

[The comic strip where it all started!]