Very excited to premiere the first Daily Grindhouse review from Patrick Smith, who arrives guns-blazing with his first dispatch from the Toronto International Film Festival. 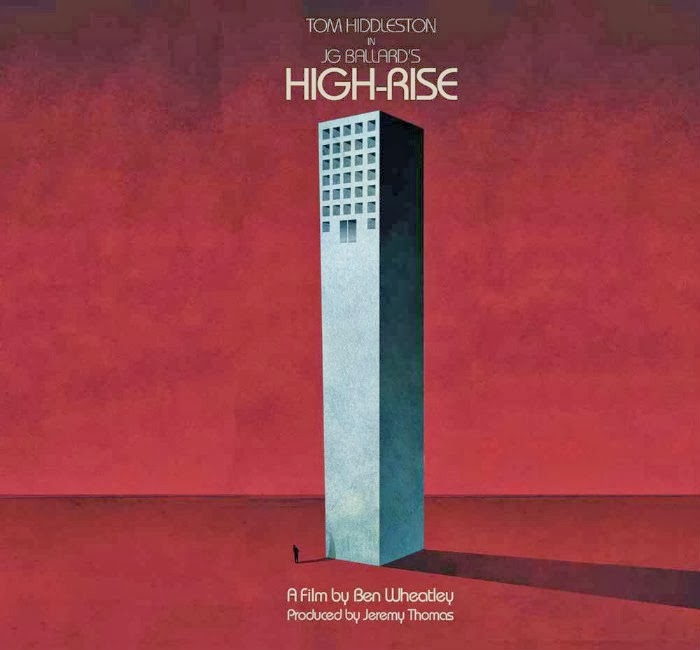 When J.G. Ballard wrote HIGH-RISE in the 1970s, he must have thought the world was on the precipice of some kind of sea change. Social upheavals, wars, and violent individual attacks must have seemed like the first salvos of an apocalyptic descent. World being what it is, however, it just kept on turning, and so much stranger. So it’s fitting that Ben Wheatley (DOWN TERRACE, KILL LIST, SIGHTSEERS, A FIELD IN ENGLAND) is the guy to finally adapt Ballard’s novel and doing so creates a film that both has a foot in the past while also having an eye on the present.

HIGH-RISE follows the residents of a newly constructed high rise complex which, after a few clashes between the upper and lower levels of the building, quickly devolves into tribalistic warfare and sexual decadence. At the center of this is Dr. Robert Laing (Tom Hiddleston), who slowly begins to accept the new status quo, while being torn between the barbaric Richard Wilder (Luke Evans) and the building’s architect, Anthony Royal (Jeremy Irons).

In the years since KILL LIST, Wheatley has shown to be increasingly fascinated by characters giving in to their most basic animalistic instincts, and in that regard, HIGH-RISE just might be his magnum opus. However, where his previous films could be described as personal apocalypses, HIGH-RISE is far more communal, and working with a script from Amy Jump, Wheatley nicely manages the progression the story follows — the characters going from well-to-do working professionals to extras from a MAD MAX movie doesn’t feel jarring so much as the natural order of things.

That naturalism, however, only really works because of the sheer aliveness of the setting. The production design makes the high rise looks like a building, but it also looks like the skeletal finger of some kind of buried elder God. While on the inside, parts of the building look like the interior of a temple, spliced together with the defining features of upper-middle-class living at the time. As the story progresses, those modern features are gutted and cut and fused with its stone frame to create something that perfectly embodies the warped mindsets of its inhabitants.

The cast of those inhabitants is stacked with the highest-profile talent Wheatley’s worked with in his career so far. Hiddleston is a naturally charismatic leading man, while also having the chops to show us a man who wants to remain separated from the carnage he’s found himself in, but once he partakes in it, becomes a man perfectly suited for it. Wheatley also proves to be one of an ever-growing number of filmmakers who understands the benefits of the female gaze, and routinely shoots Hiddleston for maximum sexualization (Tumblr might break right in half once this flick gets a wider release).

In my opinion, though, the stand-out is Luke Evans, who seems to be channeling a young Lemmy Kilmister in his performance as Wilder, who manages to be infinitely watchable no matter how reprehensible he becomes. The rest of the cast is rounded out by the likes of Sienna Miller, Elizabeth Moss, and basically every other British actor you’ve ever heard of who aren’t given as much to do, but still prove themselves game for whatever Wheatley throws at them.

HIGH-RISE is definitely another step forward for Wheatley in an increasingly fascinating filmography (personally, I can’t wait to see how he pulls off something like the upcoming crime thriller FREE FIRE) and this latest film deserves whatever accolades it gets. It might rub some people as cynical that people would devolve so quickly, but in the end, as with all his movies, Wheatley shows us that although we have civilization, we should never become so complacent to think we won’t ever become animals dancing in the night again.