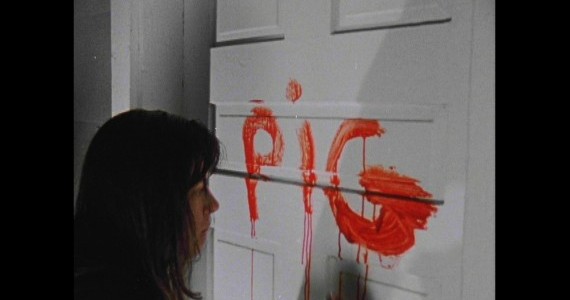 Jim Van Bebber is back! The director of 2003’s spectacular exploitation classic THE MANSON FAMILY has directed his first new production in over a decade, the nature run amok short GATOR GREEN, financed thanks to backers of a Kickstarter campaign and the guys at Unearthed Films. Not only that, but THE MANSON FAMILY itself is currently being re-released all around the country with GATOR GREEN as a short subject before it. THE MANSON FAMILY will also debut on Blu-Ray in May, courtesy of Severin films, who is also handling the theatrical re-release.

We got the opportunity to talk with Van Bebber about his current and future projects, generations of horror, CGI, and the recent interview he did with Badass Digest that just confused the hell out of everybody.

As a special bonus, Chicago area fans can win free tickets to the April 12th showing at the Logan Theater — see below for info! 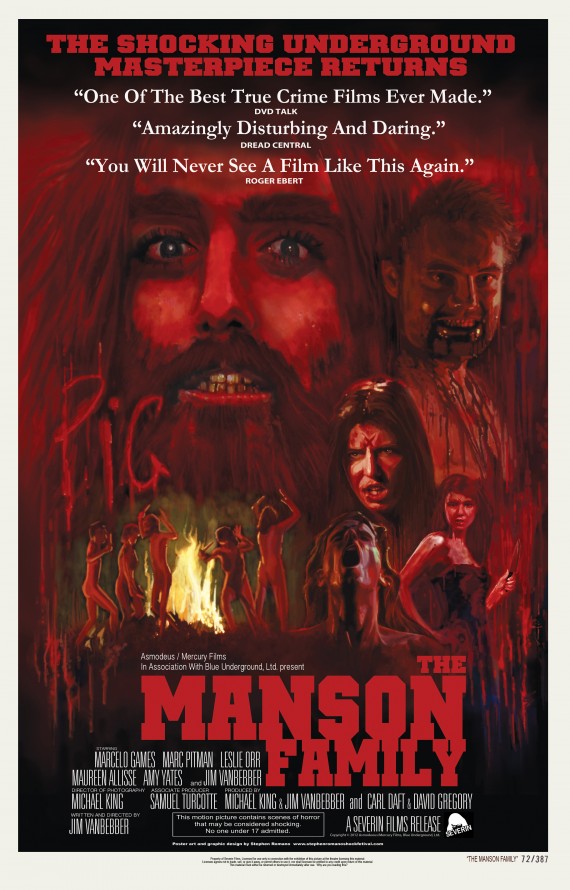 P: I’m glad that THE MANSON FAMILY is getting a theatrical re-release before the Blu-Ray.

J: Yeah, it’s actually playing for cities than it did the first time around, in 2004.

P: I know it’s coming back here to Chicago, where it premiered at the Chicago Underground Film Festival back in 1997. That was in a different cut than what was ultimately released, wasn’t it?

J: Yeah, it was. Not that different. That was a work in progress.

P: Are you personally involved with the new transfer of the film?

J: I supervised it. And I did a commentary. I’m not one for commentaries. To paraphrase John Ford, I like making films, I don’t like talking about ‘em. But it was part of the deal I made with Severin, to give them some extras.

J: I hope it’s a new generation! I hope it’s the Facebook generation that sees this film in its 35mm glory. And even if you’ve caught it on DVD, to see that print, with the surround sound in theaters hooked up, it’s an experience. Yeah, I hope that kids who are just now turning 17 check it out, and I hope the old fans come and see GATOR GREEN.

P: It was very ahead of its time, as it was one of the first movies to replicate that ‘70s grindhouse feel, and do it so well. And now—

J: It’s a brand name. Thanks to Tarantino and Rodriguez, who made a double feature with digital scratches and stuff. Not very grindhouse, but entertaining. But it has entered the vocabulary of the genre.

P: Yeah, there’s even people out there doing replications of shot-on-video horror movies.

J: Yeah, that sound crazy. Well, you know, if it can evoke a time aesthetically, go for it. Because now there’s all these mediums to play with. I love film and I’ll always shoot film, because it just aesthetically works, of course for MANSON, but also for GATOR GREEN, because it’s set in ’73, and it’s a throwback drive-in southern film, so to shoot on digital would be aesthetically wrong.

P: You say it’s a ‘70s drive-in film – is it going to have that kind of southern drive-in aesthetic and the look of POOR WHITE TRASH or its’ like?

J: It’s more along the lines of STANLEY, EATEN ALIVE, FROGS… that kind of shit. Florida horror films. But yeah, it’s nasty and unapologetic and aspires to no social meaning. There’s some political subtext, but nowhere like the obsessiveness that I took on to make a serious film like MANSON. This is more like, “Let’s make a fun entertainment.”

P: How did you decide to do something this after having not directed in a while?

J: Well, I worked really hard on this Al Capone film and got it close to going into production, and that’s another, almost forensic in its accuracy and detail trip, and it’s just exhausting, prepping and all that. It was just time to relax, and getting back into directing, to make something that’s going to be fun for people to make. You know, with an edge to it. Real gators and dangerous shit, but still it’s not the obsessive attention to detail that real life stories require, like Manson or Capone or any of the other projects I’ve got brewing. 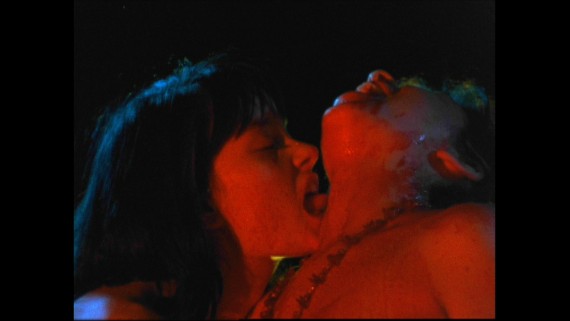 P: What other projects do you have in mind?

J: I’ve got this epic thing that’s been slowly percolating, the true story of John Henry Holiday and Johnny Ringo. If you’ve seen TOMBSTONE, you’ll know the characters. But this is about them exclusively. That’s another one that would be fucking… you don’t get any sleep because you’ve got to make sure that this is right and that’s right. It’s fun to make fiction, like DEADBEAT is a candy bar, and GATOR GREEN is a candy bar. The other films are steaks.

P: With GATOR GREEN, the short is just meant as a fundraiser for a feature-length version correct?

J: That’s correct. But it is right out of the middle of the script, and it turned out so well. I’ll remix the sound, but other than that, I’m just going to take this and put this right into the middle of the film.

P: So it is self-contained?

J: Yeah. It’s a little sequence in the middle of the film that is its’ own piece, so I was like, “Okay, let’s just do this.” But it has character and violence and madness, so it was very representative.
P: Do you think it will pair well with THE MANSON FAMILY screenings in terms of style?

J: Yeah, I think so. We also have one of the actors from MANSON FAMILY is in this. Maureen Allisse, she played Sadie, she’s in this.

P: Going back to THE MANSON FAMILY a bit, are there any exploitation films in particular that you saw as inspiration for the style of the film?

J: Well, as far as the talking heads forming the exposition telling the story, that’s kind of a style that Bob Fosse used really well in LENNY and ALL THAT JAZZ and STAR 80. And this film from ’69, END OF THE ROAD, the photography by Gordon Willis was a touchstone, and EASY RIDER for the cutting and stuff, and even though it’s a totally different film, some of the sick vibe of I DRINK YOUR BLOOD I think found its way in there.

P: I can certainly see I DRINK YOUR BLOOD pairing pretty naturally with MANSON.

P: That’s an intense ride. I’d love to go to something like that, but that’s a tough night. Now you’ve talked about not using CGI at all, correct?

J: I don’t think that’s totally accurate. If you can use it invisibly, to the point where nobody would ever catch it being used, I can see that. But to create entities, characters that are CGI, or even have a CGI stand-in for a stunt or something like that, it drives me nuts. Whether people are aware of it or not, they react subconsciously. I think their mind knows when they see something that’s real. How long that’s going to last into the further generations of kids that were born in the CGI era, I don’t know. I’m not going to have to worry about it that much longer. [laughs] These KIDS! Bieber-listening, texting whipper-snappers!

P: Though it’s funny, I’ve seen such a huge influx in the horror community as there are so many younger kids that are embracing and looking into vintage exploitation films. I look at the number of people that are really bothered by the EVIL DEAD remake because they love the original, and so many of them are 20 years old and I think it’s great that they have respect for this sort of thing, even if it’s kind of surprising.

J: No, that’s great. I can’t say I’m all that excited about that remake from what I’ve seen – it’s for a different generation of people. It’s for somebody who is going to see G.I. JOE: RETALIATION. To me, if you’re going to remake something, if it seems like such a good idea and you’re really not in it just to make money, then just restore the fucking original film up to new specs and re-release the goddamn thing.

P: How did you end up getting hooked up with Unearthed Films?

J: Y’know, just by starting the process of GATOR GREEN. First by looking with places with gators that were accessible and were willing to work, and then, “Who’s down here? Well, okay. Marcus Koch and Doug Scott. Well, you should meet [Unearthed Founder] Stephen Biro,” and then I meet Stephen and suddenly I’ve found the horror people in Florida.

P: What made you decided to fund the short through Kickstarter? Do you think you’ll do that for the feature?

J: No, that was a one-time deal. I was flattered that it worked. We sort of did it like a test idea, and suddenly it went off. We got a little money to make the short, but we’ll be raising the money privately for the feature. With Kickstarter, I’m not going to tempt fate. I’m not going to go after THE CANYONS or some shit. But I was glad that I spun the wheel and it came up black, and that was awesome.

P: Before you go, I did want to ask you about an interview you did with Robert Saucedo at Badass Digest. So… big Oliver Reed fan?

J: Of course! Eh, I just decided somebody’s going to get it, I figured Alamo Drafthouse. I thought he’d pick up on it, but he didn’t, so I just ran with it. The troggs! TROGGS! I want to look like a rock and roller. And he’s just… I thought it was funny. I figured my producers won’t kill me if I just do one like that. I always do my best Ollie.

P: Can you tell me a little bit more about what you’ll be shooting after GATOR GREEN?

J: I don’t know. There’s a couple things. I hate to talk about things in the future because it always gets jinxed. All I’m saying right now it’s all go, go, GATOR GREEN. 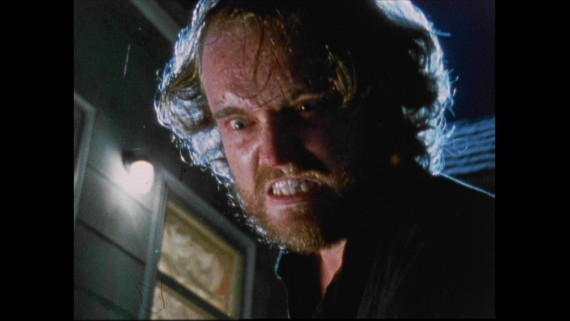 GATOR GREEN will be playing before THE MANSON FAMILY at the following times and dates:

If you miss it (which you shouldn’t!), you’ll be able to see it when THE MANSON FAMILY is released to Blu-Ray on May 7, as it will be included as a special feature.

Chicago area DG fans can win a pair of tickets to the screening on Friday, April 12, simply by making a comment below! We’ll be adding up the entries here and in another post next week, and one winner will get their names on he guest list for the Midnight screening at the Logan Theater!