Home  ⁄  The Wire  ⁄  Joe Sherlock takes us behind the scenes of DRIFTER! 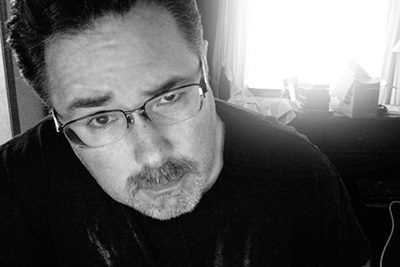 BLOOD CREEK WOODSMAN. BLOODSUCKING REDNECK VAMPIRES. ODD NOGGINS. Director Joe Sherlock has certainly helmed his share of uniquely-titled genre fare over his near-twenty year career of “doing things the drive-in way”. Comparatively, his latest film DRIFTER is slightly more sedate in both title and concept, but its moniker hides a unique, always surprising tale containing enough violence, nudity and goofy humor to satiate any fan of low-budget cinema. Joe took some time out of his always-busy schedule to chat with Daily Grindhouse about blood, boobs and how the microbudget scene has changed over the past two decades.

Sweetback (SB): DRIFTER combines the best elements of a traditional slasher with some unexpected supernatural touches. Was there ever a worry that your audience might suffer whiplash from the film’s unexpected twist? What films were a major influence?

Joe Sherlock (JS): I did not worry about that – I wanted the audience to be watching this mysterious character, the Drifter, killing people and seeming to slowly lose his mind, and wondering, “Why is he doing this?” The Drifter doesn’t have any lines, so all the audience has to go on are his ever-escalating actions. PHANTASM is my favorite horror movie. Fellow fans will note a lot of nods in DRIFTER, including the name of the reality office, character names and a few other things. I can’t say that I was consciously trying to emulate the plot structure of PHANTASM, but once I stepped back and looked at how I had constructed my storyline, I realized that I did have the same kind of “left turn” moment where the movie turned into something else entirely. And I dug that!

SB: Despite the classic “blood, boobs & beast” mantra, most microbudget directors have trouble convincing their actors to perform nudity. DRIFTER has both male and female nudity, and some refreshingly frank sexuality. How do you discuss such scenes with your performers?

JS: Very matter of factly. I have been very, very lucky in terms of actually having people approach ME saying they WANT to get naked in a movie. I don’t think I’ve ever had to ‘convince’ anyone. So it is very easy to talk about what will happen in a scene. The vibe on my sets is usually very casual and fun. We all want to make a cool movie, but have a good time doing it. And you are right – it’s part of the classic formula. I am a fan of b-movies and see those as just ingredients in making one.

I had some specific ideas for the hot tub sequence – I wanted to at once show that this was a couple who had been married for a long time, that they had developed a kind of banter that many long-time couples have, but also to mix the sex appeal with some humor as well as foreboding mystery with cutting back and forth with the drifter. To make it all work, I had specific lines, actions and shots for that sequence.

The “party house” stuff at the beginning, however, was all improv’d on set. I just let the two actors work out together what they wanted to do and I tried to get some shots on camera.

SB: Much of the film’s success or failure depends on the performance of Richard Johnson as the somewhat uptight Realtor Don. The character is presented with plenty of humor, but is pretty far removed from a usual horror protagonist. How did Richard get on-board the project? Was his lack of acting experience ever a concern?

JS: I have known Richard since high school, and worked with him on a couple of previous projects, UNDERBELLY and BLOOD CREEK WOODSMAN. This was the biggest part he has played, but I like the way it turned out – I think you hit the nail on the head when you called his character somewhat uptight. Don has been doing this for a long time and he is good at it, and he’s at a point in life where he’s just tired of a lot of crap. His lines, “I am surrounded by morons!” and, “Well, people are idiots!” are things I have often said. He’s already taken on the task of selling this questionable house and is taking guff from Angus, and then all this crazy stuff happens to make things worse.

He is not the lead you might usually find in a b-horror picture, like a hunky young college student or a sexy girl, but I kind of like that. Sometimes, it is a nice change of pace – like the grandpa and grand daughter in Guillermo Del Toro’s CRONOS and even Reggie the ice cream man in the PHANTASM series.

SB: Speaking of humor; DRIFTER is packed with it. To the point where you could almost classify it as a horror comedy. How important is it to you to balance your more explicitly horrific scenes with moments of comedy?

JS: I didn’t start off intending for this to be a horror comedy, but I think as I write I tend to just find the humor in situations, and it works itself in. I think a lot of times I ended up putting some humor into conversations just to keep them from being boring. I didn’t want it to feel like the movie was “kill scene-padding dialogue scene-kill scene-padding dialogue scene-kill scene, etc. At least the dialogue scenes would have some entertainment value to them. Sure, the plumber could have just talked about coming to do the plumbing job, but wasn’t it more fun to hear banter about that infamous New Year’s Eve party? Plus I think it’s a good way to actually heighten the scares and gore scenes, to juxtapose them with scenes of a different tone.

SB: You wear a lot of hats on your productions – director, editor, writer.. even actor! Do you have a preference? Is keeping yourself so busy part of the enjoyment of cranking out low-budget features, or is it a cost (and frustration) saving method?

JS: I like parts of all of those jobs, which is probably why I keep doing them all! There is magic in writing when you really get in the grove and the story ideas are coming faster than you can type them and you come up with something really cool. Directing and shooting is hard work, but it is how I make the vision in my head come the closest to what ends up on screen. Editing is magic as well in that you not only get to see this collection of scattered scenes gel into something with some personality, but so many happy accidents of things aligning happen and there is the fun of fine tuning something for just the right tone or effect. While I often do the music for my movies, Steve Sessions really wanted to do a score for DRIFTER. I told him I wanted something like the music of PHANTASM or THE FOG and he created a perfect hybrid of both.

SB: What should we be expecting next from yourself and your production company SKULLFACE ASTRONAUT?

JS: I am wrapping up work on a weird horror/sci-fi thing called ODD NOGGINS that I hope to have out by the end of the summer. Also, I am meeting with my post-production partner on BLOOD CREEK WOODSMAN this summer to hopefully get the last of some color correction and a few other things done so that can be finished up as well. Beyond that, I have loads of ideas, and am working on a few different scripts right now, but ‘the next one’ hasn’t quite been decided on yet.

SB: We’re rapidly coming upon the 20th anniversary of the release of DIMENSION OF BLOOD. What have been some of the biggest changes in the SOV and microbudget industry that you’ve witnessed since starting nearly two decades ago?

JS: The biggest changes have all been technology. The basics are still the same – you still need to write an interesting story and get people to be in your movie and have a place to shoot and mix up some fake blood, etc.

I’ve always been a proponent of doing what you can with what you’ve got. I shot DIMENSION OF BLOOD on VHS. That’s all I had. I shot on 8mm and Hi8 for a long time, then miniDV and now HD.

I edited DIMENSION OF BLOOD on a then-already-ancient 3/4’ Umatic Tape set-up. Now I can edit and master on my computer and have so much control it is amazing.

I’ve been connected to other filmmakers using technology all along – email, MySpace, bulletin boards and now Facebook. Same thing with casting and scheduling – I do it mostly all through Facebook messaging these days. Promotion and distribution: same thing – what used to be coverage in Draculina Magazine, snail-mailed brochures and VHS boxes is now DVDs, streaming and social media.

But what is great is that there are still individuals who have that no-budget/DIY/SOV spirit – they want to make movies and they just do it! They don’t let anyone tell them they have to wait to have the right degree or the right camera, they just take what they have available to them and make something. To interact online with those like-minded people is exciting and fun. Technology today just means the stuff they make looks better and can be thrown up online for all the world to see!

SB: For readers who want to keep up with your current and future work – or pick up a copy of DRIFTER – what’s the best way to do so?

JS: http://www.skullfaceastronaut.com – that’s the place – you can see all kinds of trailers and pics and buy things and check out my convention trip reports and production diaries and all kinds of stuff.

SB: And, finally, what advice might you have for a young or inexperienced director looking to tackle their first feature?

JS: Overall, I’d say to not wait for all of the conditions and situations to be right. Because they never will be. And then you will never make anything.

More specifically, I would say for your first feature, make something that utilizes what you have available to you. That means locations, props, people, etc.

I had friends who were bellydancers. So bellydancing aliens turned up in MONSTER IN THE GARAGE. I co-owned a comic book store for many years. So parts of DIMENSION OF BLOOD take place there. A friend owned a restaurant and bar, another friend’s sister ran a beauty salon, etc. It’s amazing how many people will let you shoot places if you will just ask – they think it’s fun and unique to be involved in a movie…because it is! If you don’t have any hopes of shooting anywhere but your house, just write a movie that takes place in your house!