(The community of those that create fan dubs, subtitles and edits of films has grown exponentially in recent years. We’ll be focusing on films that have resurfaced on the fan trading circuit that have never been available for distribution, especially in an English language form.)

Lon Chaney, Jr. was a busy man in the 1950s, appearing on television on a regular basis and appearing in such horror mainstays as THE INDESTRUCTABLE MAN, THE CYCLOPS and THE BLACK SLEEP. However, one of the holes in his filmography has always been 1960’s LA CASA DEL TERROR, a horror/comedy film shot in Mexico for director Gilberto Martínez Solares (SATANICO PANDEMONIUM). Shot in Spanish and never available in any English form (though footage was used in Jerry Warren’s English-language FACE OF THE SCREAMING WEREWOLF), the film has recently resurfaced with subtitles created by a fan by the name of Fredegis, who has supplied a subtitle file that finally allows English speakers to take a gander at just how bizarre a film LA CASA DEL TERROR really is. 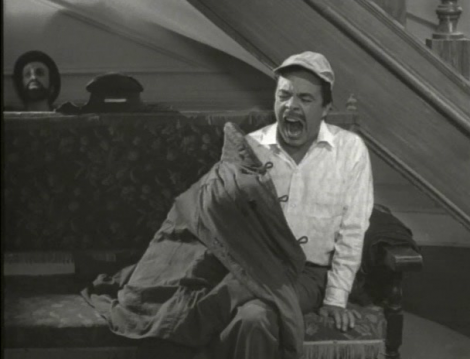 LA CASA DEL TERROR’s star is German Valdes Tin Tan, a popular Mexican comedy star at the time whose schtick, if this film is anything to judge by, is essentially a mixture of Jerry Lewis and Jerry Stiller, compounded with and Mexican stereotypes. In TERROR, he plays Casimiro, who somehow manages to be shiftless and useless despite having two jobs, as he spends most of his working hours taking naps. One of these jobs is as a caretaker at a wax museum, allowing him to make plenty of frightened facial expressions as he wanders around after his naps, getting freaked out every few seconds by rolling his eyes in a manner that would make Mantan Mooreland blush.

Little does our hero realize that the wax museum’s owner Profesor Sebastián (played by Boris Karloff lookalike Yerye Beirute, who must have been heartbroken by the downtick in work when Karloff himself started making films in Mexico) is actually a mad scientist who’s been sending his two minions (one of them is seriously named “Nacho”) to the local graveyard to get bodies for his doings. Now, you might think that Casimiro would be suspicious by their random disappearances through a secret panel or that the mad doc keeps insisting that he donate blood to them via a comically giant syringe, but as it’s been established, he’s not the brightest of bulbs. 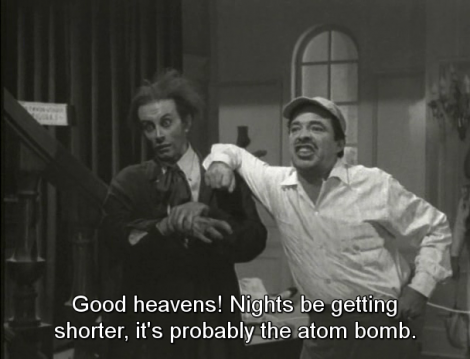 Still, his third grade education is more than those of the minions, who point out the fact that this places him well above their academic level when the professor demands one of them give up their brain for his work, which involves “a rehydrating device to give life to dead tissues – even a mummy if need be!” It’s a convincing argument, and Casimiro is the agreed-upon donor, as Sebastian yells, “The glory will be his! The glory of donating his brain to science!”

The problem is that the experiments aren’t going that well. Regularly injecting Casimiro’s blood into corpses and flipping a few switches doesn’t really seem to do much of anything, and when the cemetaries are placed on watch what with all the corpse robbing, the team is forced to make other plans. Fortunately, the newspaper has the answer in the form of the local archaeological presentation of a “FAMOUS MUMMY” (says the headline). 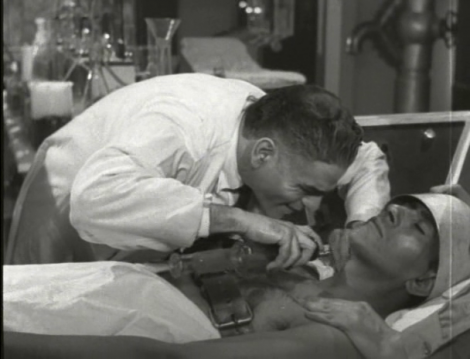 What makes this mummy so famous? Well, according to the presenter, it’s the corpse of an aggressively evil man who had a curse placed upon him that causes him to become a werewolf during a full moon – an event that he claims he can confirm had happened multiple times! Naturally, a resurrecting werewolf mummy is the perfect specimen for scientific experimentation, especially one portrayed by Lon Chaney Jr. in an almost completely dialogue-free mode, so the trio snatch the mummy and take him back to their headquarters, past the snoozing Casimiro.

While all this is going on, we also get to see Casimiro off the job, attempting a romance with local waitress Paquita, who appears to be the only game in town as far as ladies are concerned as every other male cast member who comes in contact with her, including the Professor and his minions, want to go after her as well. (Her aunt, who owns the restaurant, is apparently too age-appropriate for such shenanigans.) Casimiro also works with her at his (and her) other job, as he cleans the office of a psychologist for whom she works as a receptionist. Paquita eventually becomes enamored his his advances and the fact that he’s a constantly-broke shiftless loser who woos her only by complimenting her cooking, resulting in a musical number about how Casimiro is from the Yucatan and loves to dance. Because of course. 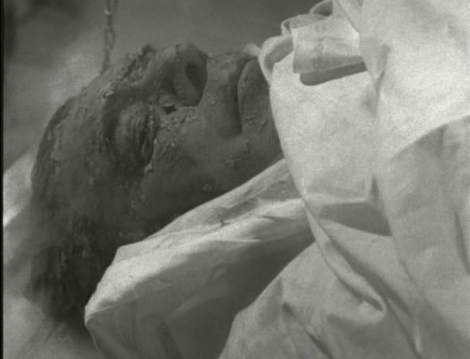 Naturally, the mummy man comes to life during a full moon, resulting in some solid make-up effects that must have come as a shock to those watching the film without subtitles. He manages to kill poor Nacho, but due to lack of blood (!?) he drops “dead,” only to revive again and storm into the wax museum once the Professor and other henchman have left, much to the chagrin of Casimiro, who’d just finished wooing Paquita with his awesome song about himself. Casimiro rushes Paquita out of the wax museum before she even sees the beast, who reverts back to “dead” after wandering off just in time for Casimiro to get back there with a police officer.

Things move along, as the beat gets a brain transplant, comes back to life, offs the other henchman and then makes his way towards Paquita’s place for reasons never really explained. It all ends with a silly climax after Casimiro chases the Paquita-holding creature up a building and then falls off onto an awning – though the beast himself takes the elevator down. What the hell? 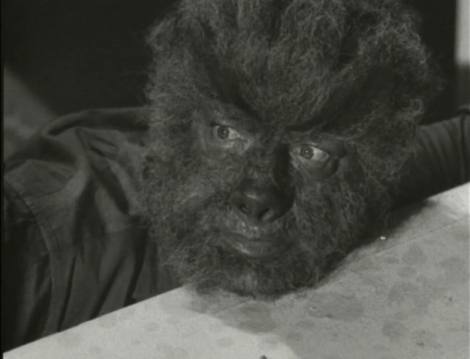 (As a side node, Rudolph Gray’s “Nightmare in Ecstacy” contains an anecdote from Ewing “Lucky” Brown about Ed Wood having shot footage of Cheney in werewolf make-up climbing up a building in 1957 as promo material for an unmade film. While Wood may have shot such footage, and a scene with that description appears in CASA, this could not be the same footage as the side of the building set it in CASA is used by other characters as well. It’s damn unlikely that a Mexican-lensed horror pic would bother to send a film crew up to a Santa Monica set just to match a scene with some random Chaney-as-werewolf footage they happened to own.)

It’s all goofy stuff, and while the comedic bits don’t really work at all (especially the two separate scenes involving Casimiro in the psychologist’s office) the more horror-influenced moments aren’t bad. Chaney’s make-up, in fact, is about as good as his WOLF MAN gear, and those used to the general vagueness of low budget ’50 “science” fiction shouldn’t be too put off.

Fredegis’s subtitles do a fine job at getting the point of the scenes across, even if they’re often more based on a word-for-word translation, leading to some awkward phrasing like “I finally find you!” They even have explanations as to a couple more ethically untranslatable moments, such as explaining “A pulque torero” as an Agave alcohol illegal maker. They certainly bring a new understanding to a film that had previously been unavailable in an English form, even if that often just makes the film even more ridiculous than it may have seemed to those without the ability to understand Spanish.

As much as CASA can be called dumb, inexplicable and ridiculous, it’s not really incoherent or dull, and the same can’t be said for FACE OF THE SCREAMING WEREWOLF, a 1964 release put together by Jerry Warren that uses footage from CASA, 1957’s THE AZTEC MUMMY and new scenes Warren shot in a half-hearted attempt to tie everything together. (I won’t give him the dignity that the “Directed By” credit in the film allots, as when it comes to FACE, “direction” applies to Jerry Warren as much as “cooking” applies to the preparation of Hot Pockets.) Trying to describe the “plot” of FACE is akin to attempting to figure out the color of pathos — it’s just not something that can be done, because there was clearly no intention to read it that way. 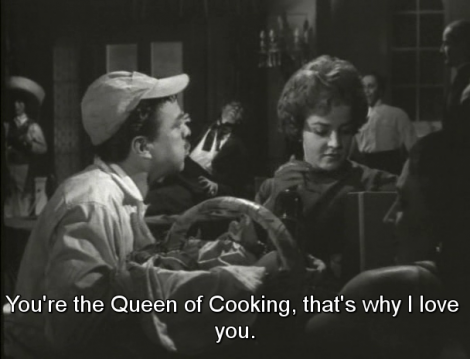 The footage from FACE used consists of the evil doctor and his minions with the werewolf, awkwardly shoehorned into a storyline that has something to do with another mummy, a woman with visions of an Aztec ceremony and another criminal on the loose. A half-assed attempt to fill in the blanks is made by footage of some of the lamest “news” footage in film history – a man behind a table explaining what’s going on as a paper with the words “NEWS DESK” hangs in the background. Casimiro himself is entirely removed from the film, with the exception of footage of him sleeping in the wax museum, from which no context is provided! He also shows up briefly at the end in a scene where he rescues Paquita, but again, it comes from out of nowhere and just reads as “some guy saving some girl from some wolfman.” 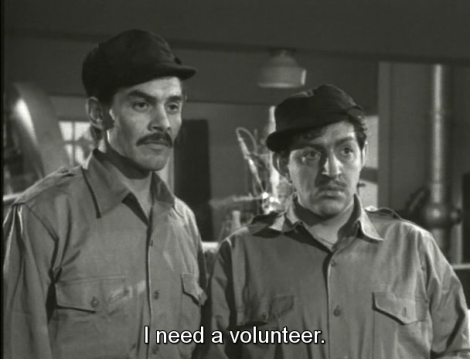 LA CASA DEL TERROR is by no means a good film, but it’s certainly more entertaining than the inexplicable nonsense that is FACE OF THE SCREAMING WEREWOLF. The fansub community should be proud of Fredegis’s work on the subtitle track, which finally allows the movie to be examined on its own merits, rather than the distorted version that has long been the basis of its minimal reputation.