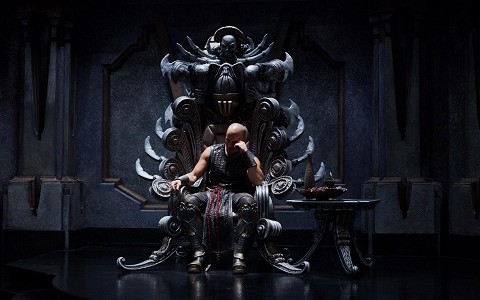 During its theatrical release, Daily Grindhouse already brought you one excellent review of this movie, but we like to spoil you. Here’s another:

The role of Riddick is Vin Diesel’s Madea. This is a character he will insist on returning to, again and again, over and over, regardless of what anyone else thinks or needs. The character may or may not bear out such devotion, and may or may not lack for depth, but those considerations are not going to slow this train. In many ways, he’s right to do it. Don’t misunderstand. The modern cinematic landscape is seriously short several mid-range actioners with mean, stoic anti-heroes. That was why I liked 2000’s PITCH BLACK, in which writer/director David Twohy and his star first introduced Riddick, a deadly criminal with night-vision eyeballs and a particular talent for killing space monsters. There wasn’t much like it at the time. There still isn’t. The most popular action movies nowadays are kid’s stuff at best. At worst, they’re neutered. And neutered is a bad place for this particular genre to find itself. To give it credit, the new Riddick movie, conveniently titled RIDDICK, lunges boldly and violently at that R-rating, but in the process reveals itself to be pretty moronic.

Unfortunately, some recapping is in order. PITCH BLACK, the first movie in this series, found a spaceship crash-landing on a hostile planet infested by carnivorous alien creatures who attack at night. Vin Diesel’s Riddick, a convict and prisoner, becomes the crew’s only hope of survival due to his surgically-enhanced vision and his vast experience in the ways of killing. Cole Hauser played Johns, a bounty hunter who seemed to be the hero of the piece until Radha Mitchell’s pilot character emerged as the moral center of the film and Riddick its most memorable player. The script by Twohy and Jim & Ken Wheat had some nice reveals and reversals, and Keith David (THE THING, THEY LIVE) played a major supporting role. Then 2004 brought THE CHRONICLES OF RIDDICK, a much larger-scaled adventure which I haven’t seen. Turns out that’s a problem, because 2013’s RIDDICK certainly unfurls under the expectation that the audience has seen PITCH BLACK and THE CHRONICLES OF RIDDICK. There have also been cartoons (DARK FURY, which is cool) and video games (ESCAPE FROM BUTCHER BAY and ASSAULT ON DARK ATHENA, which again I haven’t encountered). This character has a strong following, obviously, which means that RIDDICK may well play better to the obsessives than it did for me. But I’m of the opinion that a movie should work for the casual viewer as much as it does for the long-timers, and with that criteria [and others] in mind, RIDDICK crash-lands with a dull thump.

RIDDICK opens with the title character marooned on an all-new hostile planet. The very first sight is that of a space-vulture pecking at Riddick’s bloody hand. Riddick being Riddick, he grabs the creature by the throat and chokes it to death. If this reminds anyone of a similar moment in another Universal film, 1982’s CONAN THE BARBARIAN, well hey. It’s only the first of a lengthy parade of genre references both intentional and possibly accidental — RIDDICK as a film invokes influences as varied as ALIEN, ALIENS, ALIEN3, ALIEN RESURRECTION, JURASSIC PARK, APOCALYPSE NOW, TREMORS, and the work of Frank Frazetta. Being built on a foundation of homage is fine in itself; PITCH BLACK was a pleasing vehicle in part because it was powered on the stuff. But PITCH BLACK is itself one of the primary influences on RIDDICK, which makes the latter film feel like the proverbial snake eating its own tail. And RIDDICK runs over two hours, which means it’s one of those pythons that takes a long time to digest.

Events from THE CHRONICLES OF RIDDICK are the cause of the main action in RIDDICK. Again, I haven’t seen CHRONICLES, but I can infer this because there is a flashback sequence early on, featuring Karl Urban (DREDD), who was clearly a primary antagonist in that movie. The new movie walloped me with a dense exposition cloud, but it seems that Karl Urban and his men set Riddick up, acting as allies only to blindside him and strand him on this new desert planet. By the way, DUNE was apparently a huge influence on THE CHRONICLES OF RIDDICK because that’s how all these people are dressed in the flashback, in weird beetle armor. Riddick is too, but he quickly sheds that as he fends for himself, trying to survive alone in the Australian Outback of space. He’s attacked by alien dingoes and swamp scorpions. He eventually conquers the elements, taming a baby dog-thing which he keeps as a companion, and innoculating them both from the poisons of the local predators. This part of RIDDICK is an interesting decision on the part of the filmmakers. It contains a wealth of imaginary space animals, which is the primary reason I liked AVATAR. But it also requires nearly half an hour spent almost exclusively in the company of Vin Diesel, which is problematic. Vin Diesel’s screen persona operates on a very sleepy kind of cool. He sings a killer lullaby. He’s not exactly a fiery presence. HELL IN THE PACIFIC works because Lee Marvin and Toshiro Mifune have an inner fire that shows on screen; you could watch them do literally anything. By contrast, Vin Diesel needs to be forced into action to be interesting; he needs to get into a car, or trade punches with Dwayne Johnson. Some will feel differently, but after five minutes of watching the “Vin Diesel camping out in space” movie I was ready for virtually anything else to happen.

Be careful what you wish for. Two teams of hunters arrive on the planet in search of Riddick. The first, apparently hired by Karl Urban (though I could be wrong), are a shaggy bunch of mercenaries looking to collect his head, literally. As if actively looking for an honorable mention on my most notorious year-end list, this entire gang is entirely Latin. Some characters are more memorably crafted than others. One of them is Dave Bautista, the pro-wrestler who was similarly likable in a similarly inconsistently-written role in 2012’s THE MAN WITH THE IRON FISTS. Another is Jordi Mollà, who has played villains in BAD BOYS II, KNIGHT & DAY, COLOMBIANA, and various other movies that demand disreputable men of Spanish descent. He gets to say things like “I don’t want you stepping all over my deeeck here, my friend,” to the second group of mercenaries, led by a man named Johns (Matt Nable), who it turns out is on the scene because he’s the father of Cole Hauser’s character from PITCH BLACK and is looking for Riddick to answer for what happened during the events of that film.
Three thoughts on this character:
1) I’m supposed to remember this much plot detail from a movie I haven’t seen since 2000?
2) Why couldn’t Wings Hauser have played this role? I mean really. Slam dunk, right?
3) He has Denzel Washington’s mannerisms. Seriously, if you see RIDDICK, keep an eye on this guy. It’s uncanny. When he was on screen it was all I could think about. Before you call me crazy, take a look. Think Denzel. 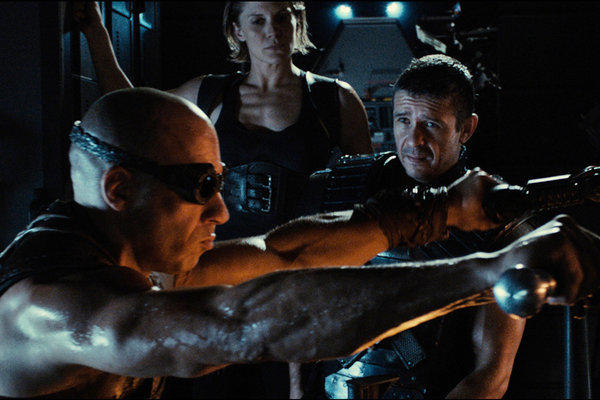 Johns’ team includes Bokeem Woodbine (THE BIG HIT), a guy who looks a ton like Mickey Rourke, and Katee Sackhoff, a neo-geek icon for her role in Battlestar Galactica. She’s the only substantial female character in the movie — the only other one, a prisoner briefly played by R&B singer Keri Hilson who we’re told has been sexually abused by the Latino gang before they let her go only to shoot her dead. This is not a film for feminists. One is killed after a minute of screen time and the other is portrayed as masculine in every way except when it comes time to film her in the shower and have the male characters make lewd, nasty sexist comments to her, despite her insistence that she isn’t interested in men. She does eventually flirt with Riddick, because this is an American action movie and a character’s God-given sexual orientation is no match for number-one-on-the-call-sheet, but honestly, no one has more chemistry with Vin Diesel than Bokeem Woodbine does. Keep an eye out for the scene where it appears the two of them are about to kiss. Now that would have been a more interesting movie than this one turned out to be.

When the two teams of antagonists arrive on the planet, the subjectivity of the film shifts abruptly from Riddick’s first-person perspective, as the main character working to survive in the wilderness, to the perspective of his enemies, who view Riddick as a kind of Michael Myers figure. The depiction of Riddick changes, from a constant presence onscreen to a superhuman wraith who sneaks in and out of the frame, quietly dispatching anyone he considers as a threat. This is not something a good movie does. You kind of can’t do that. Imagine if Indiana Jones suddenly vanished from the movie and we followed RAIDERS OF THE LOST ARK from the perspective of Belloq and Toht. It’s narratively clumsy. It’s almost as if RIDDICK reverts to PITCH BLACK halfway through — the characters literally start talking about the events of the first movie, and then by so doing they conjure the plot of PITCH BLACK. A rain begins to fall, the alien monsters start to swarm, and then Riddick becomes the only way off the planet for the rapidly-dwindling number of survivors. Remember when I complained about having to remember a movie I saw thirteen years ago? RIDDICK responds to that complaint mid-course by becoming a rerun.

There’s no joy in saying so, but RIDDICK is sporadically entertaining at best. It’s more aptly described as derivative, boorish, and insanely long for how simplistic the story is and for how little tension the action scenes produce. The movie lacks any trace of the playful humor Vin Diesel evidences in the FAST & FURIOUS movies. There’s a difference between being a compelling anti-hero, and being a dick. Riddick is really just a dick in this movie, and he’s supposed to be our guy! If you’re going to be a dick, you damn well better be funny. Everyone here is either sneering, snarling, or sulking. Why spend two hours in their company?

P.S. If you want to see a David Twohy movie that you probably haven’t seen which deserves your attention, check out the crafty, terse, and suspenseful A PERFECT GETAWAY.