Kino Classics will release
Mario Bava’s The Whip and the Body,
starring Christopher Lee, on Blu-ray and DVD

Blu-ray and DVD editions, mastered in HD from original 35mm print and featuring audio commentary by Tim Lucas, will become available on December 17, 2013 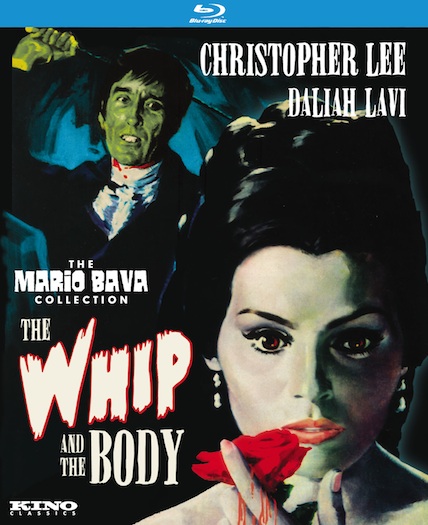 NEW YORK, NY – NOVEMBER 22, 2013 – Kino Classics is proud to announce the Blu-ray and DVD release of Mario Bava’s THE WHIP AND THE BODY, starring iconic horror film star Christopher Lee, and mastered in HD from an original 35mm print.

Set to street on December 17th, the Blu-ray and DVD editions present the film with choice of audio in Italian with optional English subtitles, English dubbed, and French with optional English subtitles; audio commentary by Tim Lucas, author of Mario Bava: All the Colors of the Dark; the theatrical trailer; and original trailers of other Bava films. The SRP for the Blu-ray is $24.95; the SRP for the DVD is $19.95.

Steeped in sadomasochism and lushly photographed in the vivid hues for which the director is known, Mario Bava’s THE WHIP AND THE BODY is a Gothic thriller that far surpasses the AIP Edgar Allan Poe films that it was intended to emulate. Christopher Lee (Dracula: Prince of Darkness) stars as Kurt Menliff, the sadistic son of a wealthy Count, who returns to the family castle, much to the dismay of his family, their servants, and the beautiful woman with whom he shares a fondness for the lash (Daliah Lavi). When Kurt is found murdered, it brings no peace to those who had feared him, as his vengeful spirit cannot be contained by the grave, and he returns to torment those unfortunate enough to remain within Menliff Manor.

With a library of 800 titles, Kino Lorber Inc. has been a leader in independent art house distribution for over 30 years, releasing over 25 films per year theatrically under its Kino Lorber, Kino Classics, and Alive Mind Cinema banners, including four Academy Award® nominated films in the last six years. In addition, the company brings over 70 titles each year to the home entertainment market with DVD and Blu-ray releases under its 5 house brands, distributes a growing number of third party labels, and is a direct digital distributor to all major platforms including iTunes, Netflix, HULU, Amazon and others.