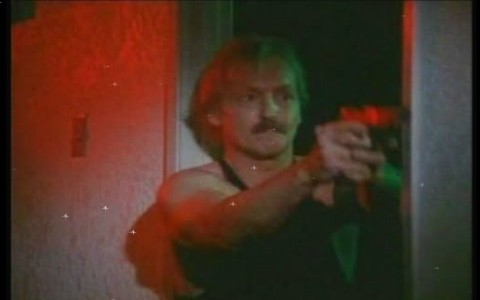 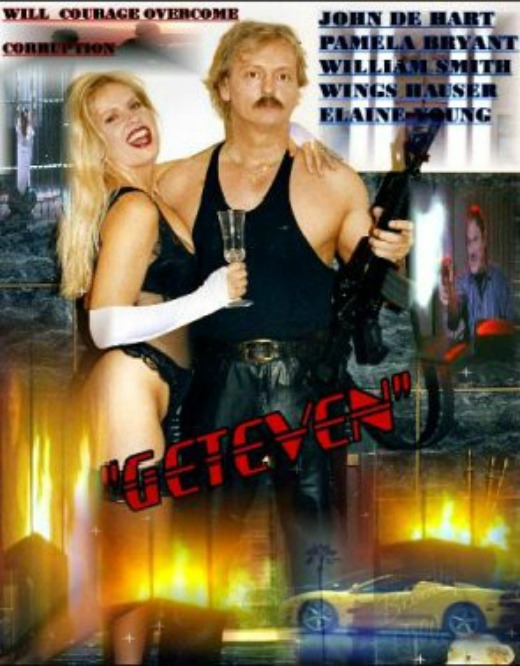 GET EVEN (or GETEVEN, as it says on the DVD box and so will be referred to henceforth) has everything it needs to become a cult classic.

A leading man who’s a lover, a fighter, a country singer, a Shakespearean actor, and most importantly the writer, director, and producer of the movie, so no one’s willing to tell him that he looks like an idiot? And how!

But the glory of GETEVEN, and the reason it deserves to be more widely seen, is the purity of its naiveté. Los Angeles trial lawyer (Malpractice! Contested Wills! Divorce Quick!) John DeHart has no idea how to make a movie. However, he does know what he’d like to see in a movie, and all those elements are here in this, his lone foray into stardom. 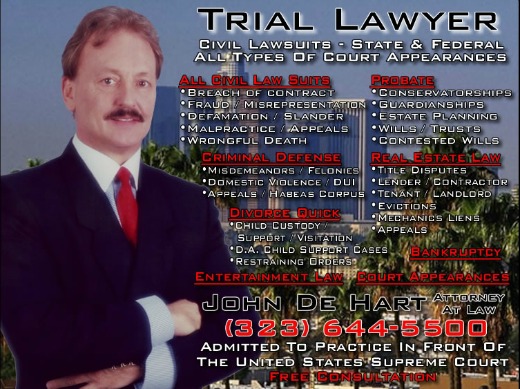 GETEVEN was shot in the early ‘90s and released as ROAD TO REVENGE in 1993. After the movie failed to make much of an impact upon its initial release, DeHart shelved the movie only to re-cut it and re-release it himself in 2010. (This explains the juxtaposition of digital camcorder footage with such early ‘90s aesthetic flourishes as the white nylon track suit Rick Bode (DeHart) wears to his own wedding.) The result of this odd decade-spanning format is that GETEVEN seems to exist in its own universe, one with no concept of time, space, fashion, or the rules of dramatic storytelling. Welcome to John DeHart’s subconscious.

To see DeHart’s raging ego and burning lack of self-awareness in action, there’s no need to look any further than the “Shimmy Slide” musical number at the beginning of the film. When Rick arrives at his favorite watering hole for “Cowboy Night”, his friends practically attack him, begging him to go on stage and perform his signature song, the “Shimmy Slide”. He obliges, then proceeds to mumble out this sub-karaoke number:

(Or if that’s not enough for you, how about this: at one point, he actually recites a monologue from Hamlet for his buddies at the bar.)

And because GETEVEN is John DeHart’s movie (and don’t you forget it), this proves to be sexual catnip for his ex-wife Cindy (Pamela Jean Bryant of H.O.T.S. fame), who happens to be in attendance. “I forgot how good of a singer you are,” she coos, stroking his cowboy shirt. (It should be noted here that GETEVEN is hostile towards ex-wives and judges in general, two groups that one could surmise have given John DeHart trouble over the years.) Like Tommy Wiseau’s 2003 film THE ROOM, one of the most cringe-inducing aspects of GETEVEN are the frequent and unnecessarily long sex scenes, where we are treated to DeHart shirtless and making out with an equally topless Bryant in hot tubs, in front of roaring fires, and in pretty much every other cliched romantic setting you can think of. (Apparently DeHart and Wiseau have very similar ideas about sex, or, more likely, what a “movie sex scene” should be):

Bryant isn’t the only familiar B-movie face in GETEVEN, either– William Smith of CONAN THE BARBARIAN and ‘60s biker movie fame plays the villain, Normad, a guy whose name sounds like a top-secret military weapons initiative. Also co-starring is fucking WINGS HAUSER (I know!), who, if he wasn’t high on cocaine during the entire period of principal photography, deserves an award for his utterly convincing portrayal of a raging cokehead. Hauser plays Huck Finney (I know), Rick’s old cop buddy whose life has gone off the rails since being booted from the force (we’ll get to that in a minute). At one point, in despair over his financial situation, Huck shoots his bills, Elvis style! At another, we watch Wings stand in a swimming pool fully clothed as he lays down “the noble noises of Huckism” (“We’re all goddamned slaves, man!”) for a skanky- looking blonde:

At the beginning of the film, Normad frames our heroes Rick and Huck for drug smuggling in order to cover up his own drug-smuggling activities. Huck and Rick are dismissed from the force and forced into private security work, while Normad gets promoted to judge for his “whistleblowing” efforts. Fast-forward about a year– after the whole “Shimmy Slide” incident, Rick reconnects with Cindy, who, after a nice dinner date, catches him up on her life: After their divorce, she got deep into drugs, which led her straight into a baby-sacrificing Hollywood Satanic cabal led by none other than…wait for it…Normad! Combined with the whole “framed for corruption” thing, that’s plenty to “GETEVEN” for. But the actual revenge part doesn’t kick in until about two-thirds of the way through the movie, and the buildup and subsequent action scenes are as stupid as you might expect. DeHart spends most of the movie hanging with his ranting buddy Wings, romancing his lady, and spinning out immortal dialogue like this:

“What are you doing? It’s cowboy night, get dressed.”

“Who are you, another drug-contaminated devil worshipper from Hollywood?”

Rick, visiting Huck in the hospital: “I thought you did that bleach thing.”

Huck: (laughs) “I did! Hey, let me ask you a question. Is this thing half full or half empty?”

If you don’t want to see this movie right this second, then I don’t understand you at all.

GETEVEN is available on DVD directly from DeHart or can be streamed on Amazon Instant Video for a mere $2.95, where it has as of yet 0 customer reviews. Just sayin’.