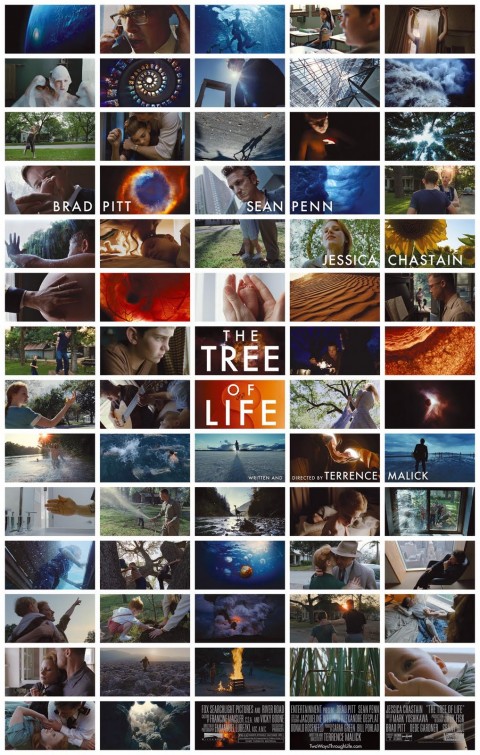 I struggle with this word “masterpiece.” How would you know if you saw a masterpiece? How many viewings would it take before you were sure? In my lifetime, I’ve often had the suspicion that a movie I just watched could be considered a masterpiece. Occasionally time, and the general critical consensus, bore my hunches out. Other times I’ve been wrong.

Critical consensus rides fairly high on THE TREE OF LIFE, one of the latter-day films written and directed by Terrence Malick. I’ve seen the “masterpiece” terminology being thrown around fairly generously. Is there such a thing as an instant masterpiece? Or is time passing a deciding factor on what is or isn’t ultimately a masterpiece? 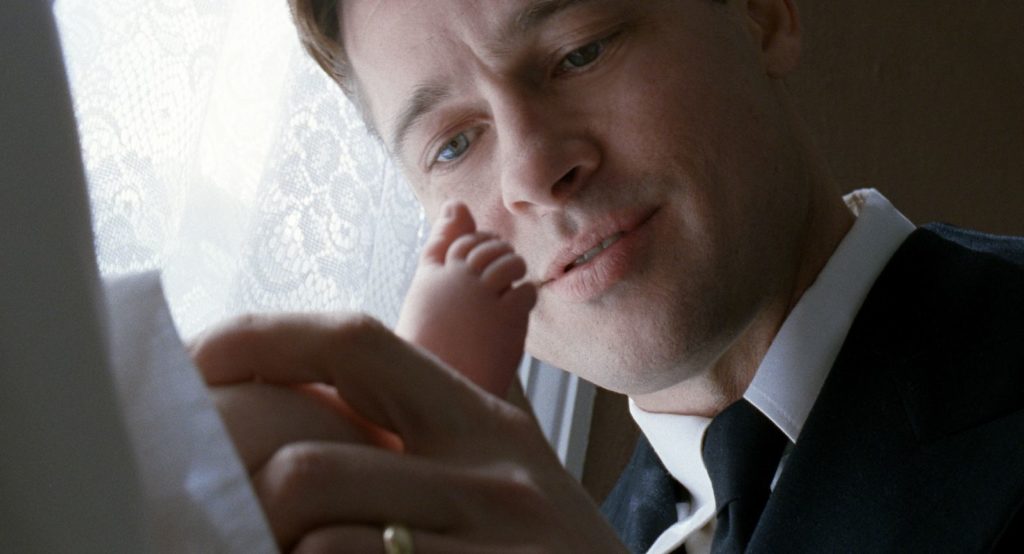 I’ve never been one for simple labels anyway. Let’s just say THE TREE OF LIFE has a better-than-average shot at going the distance, and move along from there. 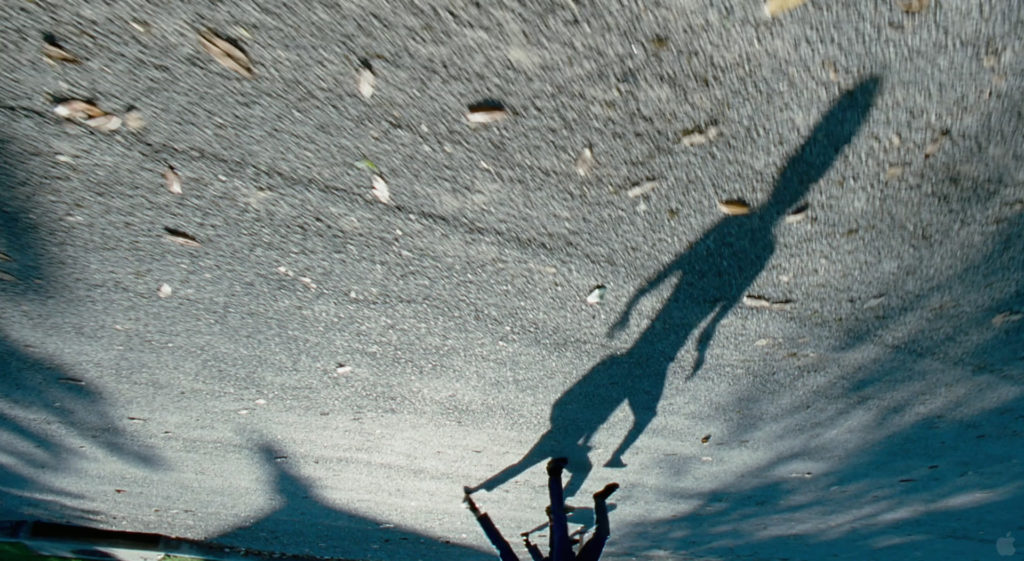 Terrence Malick has one of the most confounding film careers of any major director working. He made two movies that we can safely refer to as masterpieces, 1973’s BADLANDS and 1978’s DAYS OF HEAVEN, then didn’t release another movie until 1998, with THE TREE OF LIFE, his largest-scale film to date, starring almost every actor you’ve ever heard of. The reason why no one rushes to saddle this wonderful movie with that “M” word is because Malick’s original cut ran more than five hours and I don’t think anybody feels like they’ve seen the movie entirely the way Malick intended. It sure doesn’t feel like the work of somebody who’d been dozing off for twenty years though.  It’s pretty damn accomplished, regardless of the truncated form it arrived in. I happen to love it. I feel the same way about Malick’s fourth feature, 2005’s THE NEW WORLD, which seems to have been received similarly by the intelligentsia: highly regarded, yet with strangely muted adoration considering how much uncommon beauty is on display. THE TREE OF LIFE, finally, has been greeted with the kind of fanfare that Malick’s work deserves — clearly he doesn’t seem to need the attention (he’s pretty much the reverse of a Kardashian), but his movies most certainly demand to be seen by the widest possible audience. In my opinion, art like this makes the whole world better. 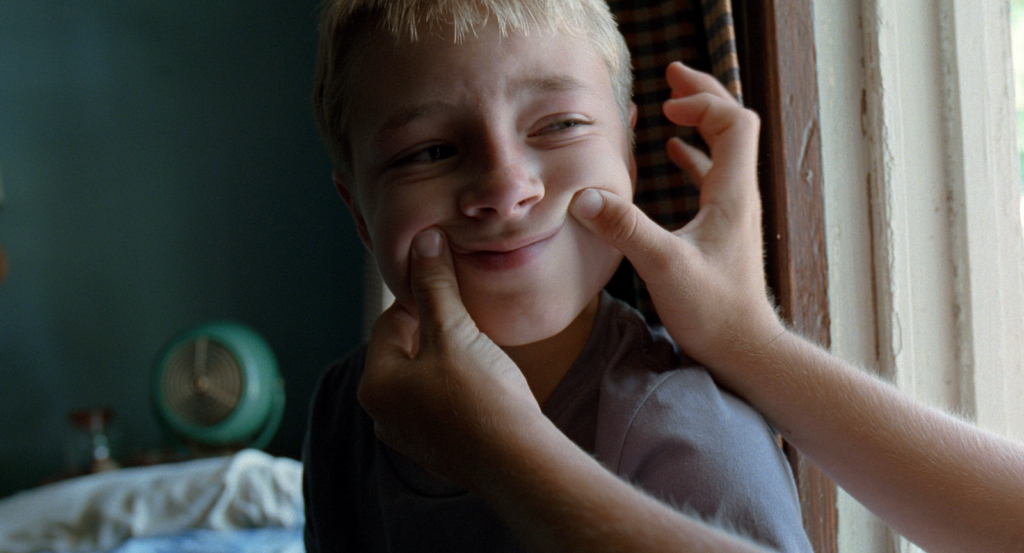 One thing people seem to have trouble doing is describing the plot of THE TREE OF LIFE. That’s because there isn’t really one. The film is told in a non-linear style, which is to say it jumps around in time. In describing the movie, it’s easiest to start with Sean Penn’s character, Jack O’Brien. As a grown, Penn-ishly grizzled man, Jack reflects on his childhood, spent with his father (played by Brad Pitt), his mother (played by Jessica Chastain), and his two brothers, one of whom doesn’t make it to adulthood. Dad is a strict and sometimes intimidating disciplinarian, and Mom is warmer and more sympathetic, even playful when Dad isn’t around. It’s not that Dad’s a bad guy, not at all, but it was a different time. In Roger Ebert’s review, which you really should read (after this one), he talks about how true to detail this story is, set as it is in the American Midwest, mainly during the 1950s. Ebert rightly calls attention to the fact that Pitt and Chastain’s characters are never given first names. They’re just Mr. and Mrs., mother and father. That’s how kids perceive adults. My niece is four, and she’s at a point where she knows her mom and dad and uncle have first names, and she knows what they are, but she treats them like secret identities — it’s “Mommy” and “Daddy” always, she’s not about to run around calling Spider-Man and Batman “Peter Parker” and “Bruce Wayne.” Malick’s movie is full of this kind of emotional truth, a specific universality, which I think helps to make sense of the film’s so-called extravagances.

THE TREE OF LIFE doesn’t just jump between Jack O’Brien’s childhood and adulthood — it goes all the way back to the beginning of time. This movie shows you the birth of the earth, the progression of life on the planet. As you may have heard, there are dinosaurs in it. I don’t want to talk about theme and meaning too in-depth, until I’m sure we’ve all seen the movie, but personally I felt that the dinosaur scenes made perfect sense, tonally speaking. Let’s just say there are slight parallels between how the dinosaurs behave and how some of the human behavior we see later can be interpreted. It’s not a literal comparison, but an emotional one. In my opinion. As the early stages of the film progress, the story centers around the O’Brien household in Texas. There is a direct line between the emphasis on a pure state of nature, from those “Big Bang” scenes, to the way the O’Brien kids explore and enjoy their environment. Malick is able to evoke a tangible sense of place — the grass, the wind, the water. Your own specific childhood may not have resembled this one, but the senses are universal. I’m willing to bet actual money that if you just allow this movie to sweep you up, there are moments in it that will feel as real to you as your own memories do. 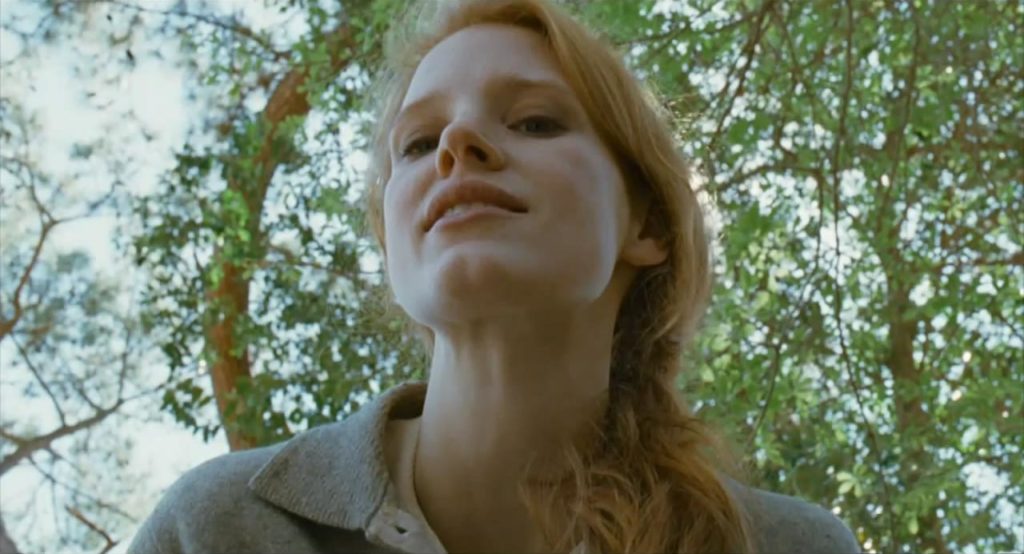 This is why I look at Terrence Malick as one of the few filmmakers I can think of off-hand who can also rightfully be called a poet. I’d argue that David Lynch is one also, but his films are nightmarish where Malick’s are dreamier. What Malick is able to do, more than almost any other filmmaker alive or dead, is to use imagery as both mood and theme. He’s also fascinated by the spiritual beauty of the natural world, and manages to work with some of the world’s greatest cinematographers in order to bring the most lucid, evocative, and stirring of images to screen. Here he is reunited with his DP from THE NEW WORLD, Emmanuel Lubezki, and together (with cast and crew) they have brought us some images that grab your soul by the collar and draw your eyes forward, tenderly though, not violently. Most movies are lucky to conjure up one or two indelible images — THE TREE OF LIFE provides you with something like two hundred. 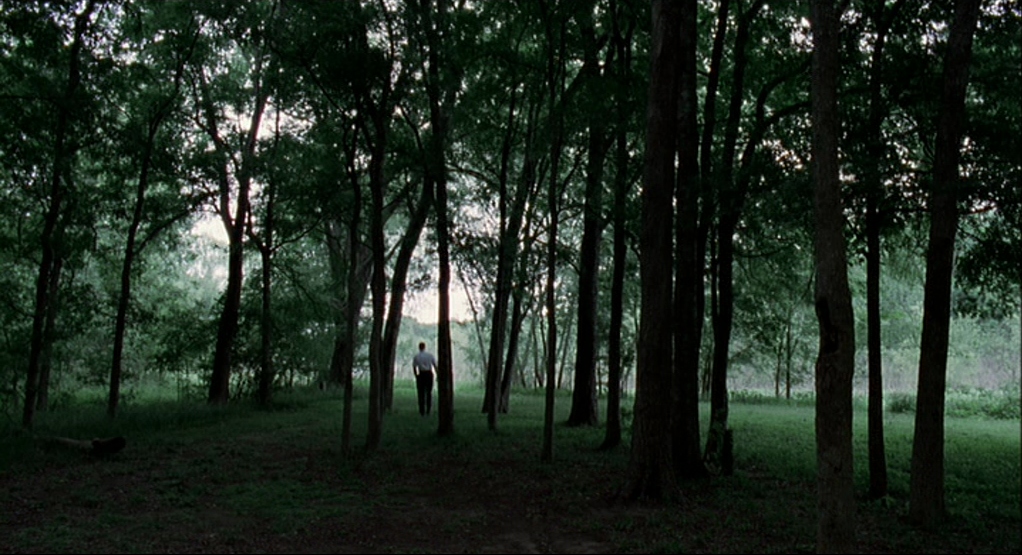 THE TREE OF LIFE is a strange and beautiful symphony that flutters by in a short two-and-a-half-hour running time. Two and a half hours isn’t short, but it felt that way to me. Honestly it reminded me as much of my own memories as it does of any movie I could name. Which I think is the key to understanding it, and that’s a notion borne out by the movie’s unusual title. The “tree of life”, as the Bible tells it, was the tree in the garden of Eden upon which fruit grew that granted everlasting life to those who ate from it. When Adam and Eve were cast out from Eden, they could no longer eat from the tree, and they became mortal. Believe it or not, this brings us back to movies. 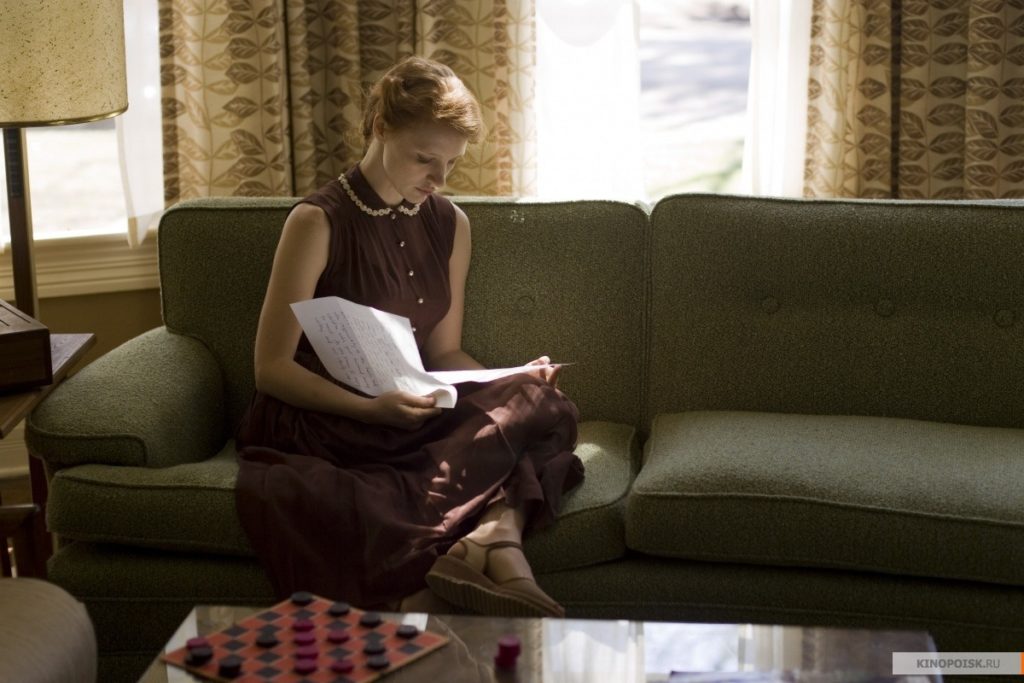 One thing that movies and memories have in common is that both create a sense of immortality. Nothing, not even the earth itself, is immortal, but as long as we’re alive, our memories feel immortal. All of us will be gone one day, and our memories with us, but as long as we live, we’re able to revisit any era of our lives, in any order. Movies don’t last forever either — prints can be lost or burned — but more than anything they encourage this feeling of immortality. Just look at the stars of this movie — Sean Penn looks every minute of his age in this movie, yet we can pop out the DVD and put in FAST TIMES AT RIDGEMONT HIGH, and see him at twenty again. That’s a kind of immortality. Brad Pitt looks sort of ageless in this movie, but then again you can see crow’s feet beginning to form, and this is an actor that many of us have grown up with. He’ll always be Floyd from TRUE ROMANCE, and he’ll just as always be Mr. O’Brien from THE TREE OF LIFE. That’s a kind of immortality. Jessica Chastain has a kind of delicate beauty in this movie that no human being can maintain forever, but as long as this movie exists she’ll always look this way. That’s a kind of immortality. I’m not sure if I’m expressing my point clearly enough, but I hope it’s getting through: These people, these characters, they’re immortal in a way, even though that’s technically impossible. 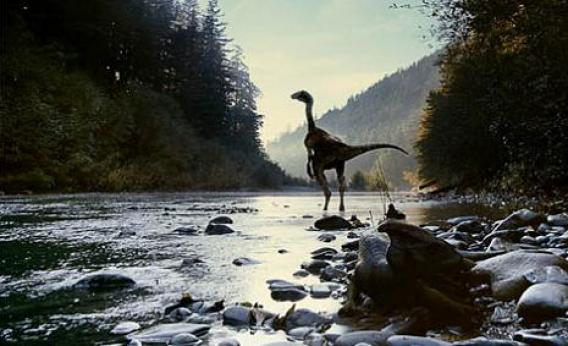 Watching THE TREE OF LIFE reminds me of those brief moments in my memory, the ones where I remember telling myself specifically, “Remember this” — these are moments that I can remember as clearly as a freeze frame on a movie screen. In college, dancing with a pretty girl in a crowded basement to music I didn’t particularly like, having a blast. In Hawaii, sitting alone at the side of a highway overlooking a beach at 7 in the morning, feeling calm as I ever have felt. Sitting on a filthy curb in Silver Lake (pre-gentrification), near a laundromat, having just gotten off the phone with a girl who mattered, knowing that, after all, there’d be no me and her, feeling like there isn’t much hope. In the hospital the day my niece was born, cradling a new life in my arms, realizing I had an official responsibility towards her and welcoming the idea, thinking “Of course there’s always hope, you idiot.” 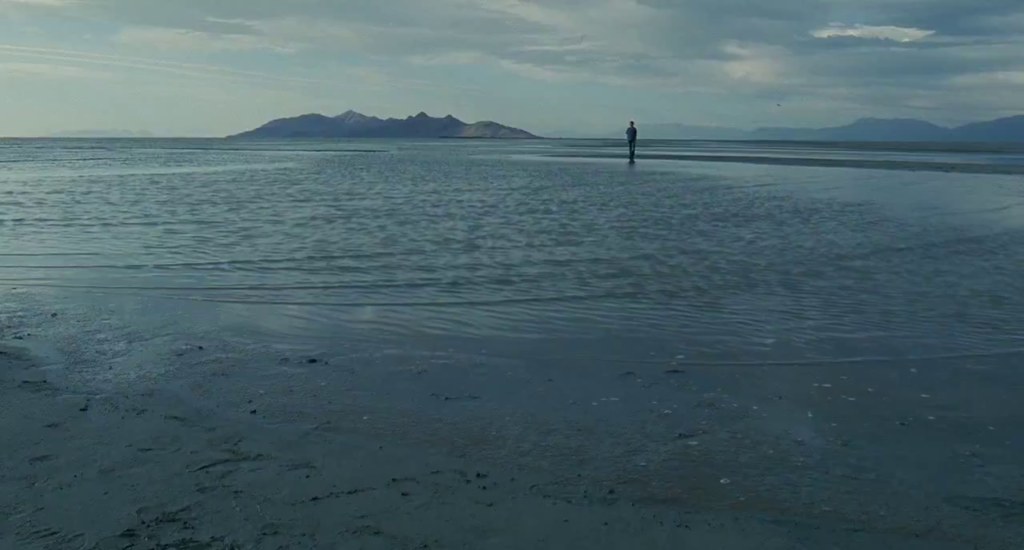 I guess that’s why I love movies so much. They take specific memories, whether those are real or invented, and make them feel like universal truths. That’s a special thing. It’s a special movie that can make such an important realization feel so clear. THE TREE OF LIFE provides illumination, in an era of great uncertainty. That’s not just good entertainment. That’s almost holy. 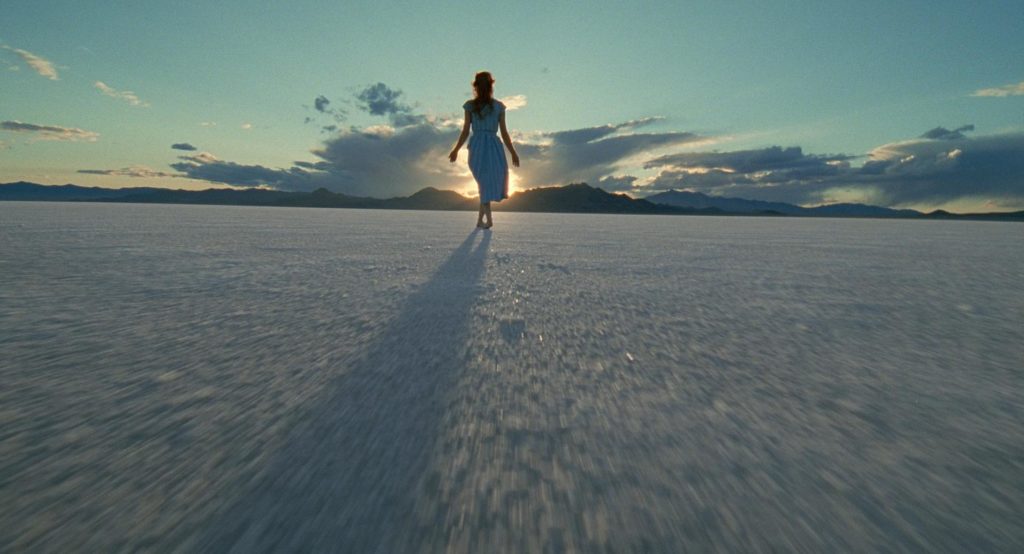 This essay is slightly altered from its original form, written by me back in 2011. Not much has changed; only everything. Meanwhile, THE TREE OF LIFE is playing tonight and tomorrow night in Brooklyn at BAM, with live accompaniment by the Wordless Music Orchestra.