Home  ⁄  The Wire  ⁄  The SOV Kid: An Interview with CITY OF THE DREAM DEMONS’ Johnny Dickie 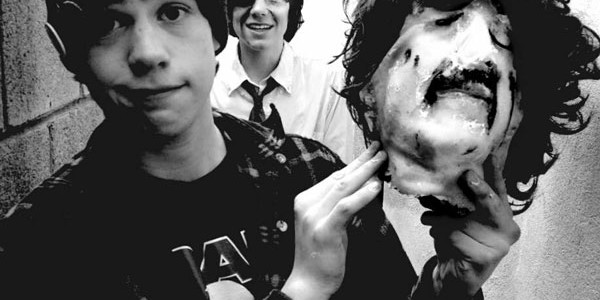 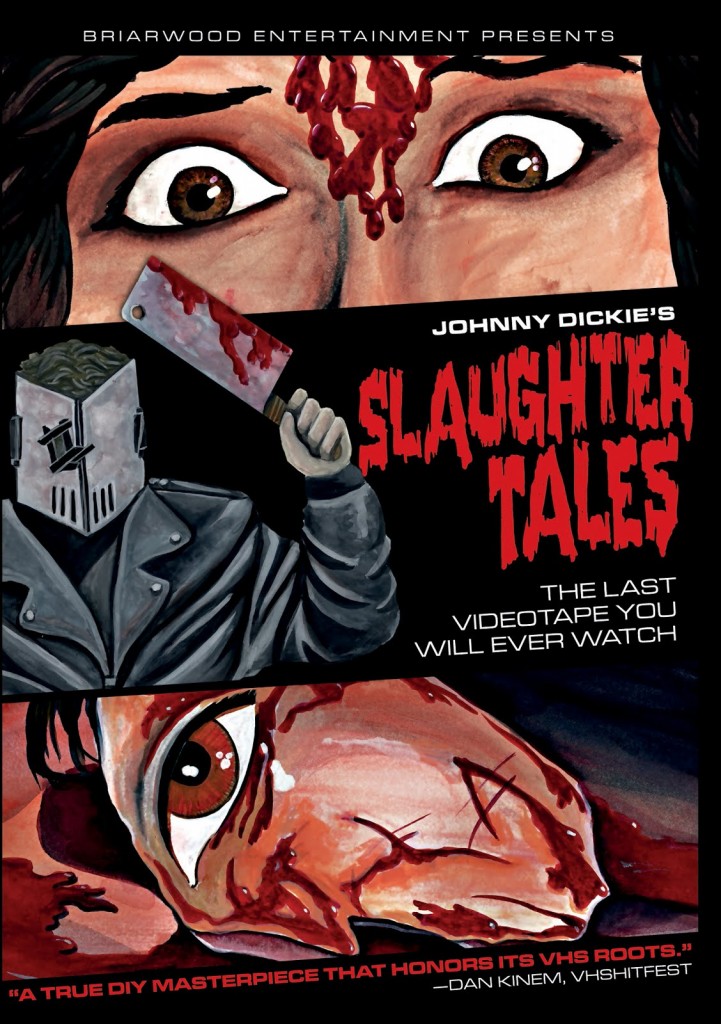 Orson Welles was but 25 years old when he made CITIZEN KANE. Big deal! Johnny Dickie made SLAUGHTER TALES when he was 14, and you don’t hear him bragging. The PA-based teen has managed to turn his love for DIY cinema into a burgeoning career, with his films making a big impact among SOV aficienados and collectors. His enthusiasm for all things low-budget is infectious, and his first proper feature CITY OF THE DREAM DEMONS sees the director reaching new levels of ambition, while maintaining the slapped together, no-budget style we all know and love. Dickie recently sat down to chat about his recent works, filming without a script, and how to handle continuity after a new haircut.

Sweetback (SB): CITY OF THE DREAM DEMONS is full of visual references to SOV films, and you’ve been an audible proponent of the microbudget asthetic. What’s the appeal of SOV to you? Was there a particular film that opened your eyes to the potential of working with an ultra low-budget?

Johnny Dickie (JD): I feel as though most of the SOV films from the early 80’s to the digital video of the late 90’s and early 2000’s show a level of craftsmanship that a lot of the more polished studio pictures don’t have. When you have to work with a shoestring budget, every task that you need to take on to make a feature becomes twice as difficult. Sometimes actors don’t show, and you have to work around it. Sometimes an effect goes haywire in the last few minutes before shooting, and you’ll quickly have to work up a way to get through it. When you are working with a bigger budget, you can hire people to make sure those problems never even exist in the first place. You can really tell when watching films like Tim Ritter’s WICKED GAMES or John and Mark Polonia’s SPLATTER FARM that the people behind the films were making them for nobody but themselves. They truly love doing what they do, and put their all into every project they work on. Also, a lot of the times, the movies are just plain good! I don’t totally look at SOV as an appeal, because some of the worst films I have ever seen have been SOV. If a movie is good, it shouldn’t matter if it was shot on 35mm or Hi-8.

SB: Perhaps most interesting about your own love and fascination with VHS is that you’re a teenager – and you came of age when VHS as a format was already being usurped. In the past few years there’s been an increased fascination with video tapes and collecting them. Why do you think people remain fascinated with the format?

JD: I think my personal love of VHS came from a very young age. All we would ever watch growing up was VHS tapes, because it was so easy to get tapes at the time, that it seemed stupid not to use our VCR. As my interest grew in horror films, I found most of the best films I would usually end up finding on tape first. I remember watching my copy of THE SERPENT AND THE RAINBOW so many times that the tape started to wear out. Why has it never died out? Why has vinyl never fully died out? I have always found something very comforting about watching a film on VHS. It could be seen as a very personal experience watching a VHS tape, it’s just you and the movie. Sure, i’ll get a DVD if it’s something that isn’t out on VHS, or if it has cool extras on it. Sure, i’ll use Netflix to watch a TV show that came out recently, but if VHS is a choice, I will always take it. Also, and I know this has been said a million times over, but it’s a very good point, so many great films have never made the leap to digital format, and might never. DVD-r’s are a good last resort, but for now the only legitimate way to see some of the best, and sometimes the most bat shit crazy films of all time, is on VHS.

SB: Speaking of your age.. You’re already working in a genre and style that tends to invite a bit of derision. When you’re filming, do you have trouble being taken seriously? I imagine when you’re talking about teenagers, it can be difficult enough just to get people to show up.

JD: Throughout making CITY OF THE DREAM DEMONS, there were MANY occasions where key actors or actresses didn’t show up. The actor who played Spat, Joseph Davalos, missed a handful of shoots while I had actors there waiting to film. The only way around it? Make up a half thought out excuse as to where his character could have gone in very important parts of the film. We were doing this all on the fly, and making it up as we went along, but I think Joey’s character becomes sort of a MacGuffin. He pops in and out of the story at random. Where could he have run off to? Who knows. Who cares. It’s hard getting people my age to really commit to a film, unless it’s something they’re really passionate about. It’s one thing to show up for a day and say a few lines, but when it comes to actually telling a full story, sometimes actors fold. I think it shows in the film how hard it was to get all the actors in one place at one time.

SB: So, CITY OF THE DREAM DEMONS might be considered your first real feature – since SLAUGHTER TALES was an anthology. Talk a little bit about where the idea for the film came from, and how you went about writing it.

JD: I would spend a lot of nights at Joey’s house, and the walk back in the morning was around two miles. I had a lot of time to come up with ideas while making the trek back, and slowly the idea of someone being cursed with having to be a doorway between reality and dream. I wanted to make a film on a larger scale than SLAUGHTER TALES, because 99% of that film was confined to my house. I wrote a treatment for the film, but as filming progressed it moved farther and farther away from the original treatment. There were a lot of angles that were never touched on in the finished film, like sleep deprivation or the death of Tommy’s father. The whole film was shot unscripted. All the dialogue was improvised or made up on the spot.

SB: I’m going to guess that your hair became a point of contention while filming – as in the first half of the film it seems to switch between your real hair and a wig – before your character eventually having his hair shorn. Was this due to some continuity problems after a hair cut?

JD: I decided (stupidly) to shave the sides of my head bald about a month into filming. My sister did the cut, and did a good job at it, but as soon as she was finished and I threw my then giant ball of hair in the trash, I realized what I had done. The wig I found in some thrift shop and it’s kind of sad how close it comes to matching my real hair at times. The hair-cutting scene was added in for convenience sake, because the wig kept getting lost.

SB: Aside from writing, directing and acting – you also do the special effects in your films. CITY OF THE DREAM DEMONS has all forms of visual violence: melting skin, decapitations, stabbings.. What was your biggest challenge in assembling the gore for the film?

JD: The biggest challenges I had to deal with were last minute disturbances while filming the gore scenes. I’d make an effect expecting it to work a certain way, but sometimes the effects were not thought out all the way. I give all the actors and actresses who had to have some kind of effect done to them a lot of credit for putting up with some of these last minute fuck ups. I’ve learned from my mistakes on DREAM DEMONS, and leave myself as much time to make sure an effect will work correctly as possible, instead of hoping things will always work out right on the first try.

SB: One thing I’ve learned from talking to microbudget directors is that they often cast themselves because it’s hard to find other people who are as dedicated to showing up ready to work. How difficult is it to take the lead role in your own film? Especially considering how many other jobs you had on the production?

JD: To be honest, I cast myself as the lead because who could be more reliable than yourself? I had predicted before filming ever began that I would have a tough time wrangling Joey in to film for as many days as it would take. I would love to cast someone other than myself in a lead role, and not even have to act more than a cameo or supporting role, but at the time I couldn’t find anyone to commit.

SB: When will folks be able to get CITY OF THE DREAM DEMONS?

JD: A contract with Briarwood Entertainment, who distributed my first film, is being signed for DVD and VHS distribution rights and release dates will be updated as soon as we have them on the official COTDD Facebook page!

SB: For readers who want to keep up on your current projects, or check out your other work, what’s the best way for them to do so?

JD: A fellow no-budget teen filmmaker and I recently finished production on CREEPS: A TALE OF MURDER AND MAYHEM , which should be released soon from Horror Boobs video and Wild eye releasing! Liam Makrogiannis is gearing up for a release of his 2012 zombie film SURVIVE, which I acted and did effects for. Also I had the privilege to do the special effects for William Hellfire’s (DUCK! THE CARBINE HIGH MASSACRE) new horror/thriller UPSIDE DOWN CROSS, also hitting DVD this year from Alternative Cinema!

SB: Finally.. As one of the younger members of the SOV community, you have a unique perspective on the type of cooperation that it takes to put together a film. What advice would you have for a young or inexperienced director looking to tackle their first feature?

JD: My best advice would be to do whatever it takes to make your movie, and to power through it without looking back. Go into your project with a clear idea of what you want the final product to be. Make the movie for yourself, make the movie YOU would want to watch. If someone says that your idea for a movie is “stupid” then say “I know it’s stupid. Maybe I like stupid movies”.

After you finish your first feature, then you should open your ears to critiques. You’re never going to get it right on the first try, but if you are wise you’ll learn from your past mistakes and hone in on what you’re good at.

So, in short, my best advice is to just go and make a movie, no matter what people say, just do it.