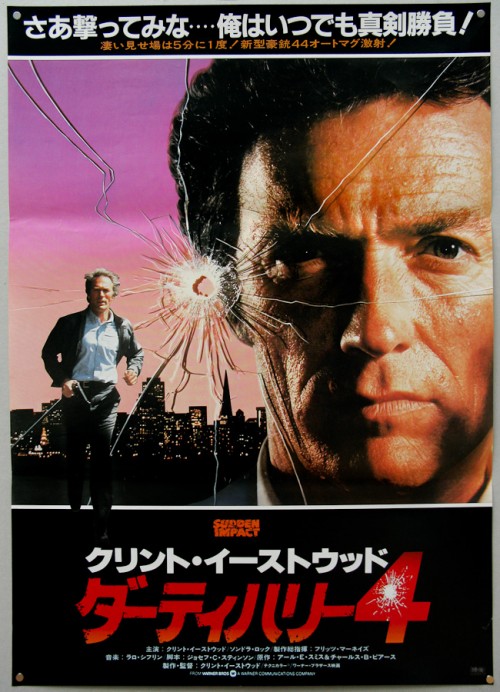 A couple months ago, I reported on the terrific film series hosted at BAMcinématek in February called VENGEANCE IS HERS, which spotlighted the subgenre of revenge pictures which feature female protagonists. BAMcinématek has re-ignited the series this week with BACK WITH A VENGEANCE, a follow-up with more great lady-asskicker pictures. This upcoming Saturday they’re showing FOXY BROWN! Pam Grier is the patron saint of this genre, for sure. She’s the all-time greatest female avenger. The guys, meanwhile, are best represented by Clint Eastwood, who in turn is probably most associated with DIRTY HARRY and his vigilante cop character Harry Callahan. The fourth and penultimate Dirty Harry film, SUDDEN IMPACT, played over in Brooklyn last night. In fairness, it’s probably not the best of the Dirty Harrys (that would be, well, DIRTY HARRY) but it’s definitely not the worst (that one is most likely THE DEAD POOL). It’s too late to see it on the big screen again (for now) but it’s worth catching regardless. And there’s a fascinating reason why.

Intriguingly, and no doubt surprisingly to many, the Dirty Harry series is far more female-friendly — even, dare I say, feminist? — than they ever get credit for being. It’s true that Dirty Harry in the first film and its sequel, MAGNUM FORCE, is more of a James Bond or John Shaft figure when it comes to the ladies. Women are in there primarily as peripheral conquests. But in the third Dirty Harry, THE ENFORCER, Callahan is partnered with a female inspector (played by Tyne Daly) who ends up saving the life of the mayor of San Francisco and getting a heroic story arc, along with Harry’s hard-won respect. No doubt the success of THE ENFORCER is what led to the long-running TV series Cagney & Lacey, where Tyne Daly again played a cop. She got typecast! But THE ENFORCER‘s Kate Moore was a cop, and a good one, whereas the woman who butts up against Harry Callahan in the subsequent SUDDEN IMPACT is a different case entirely. 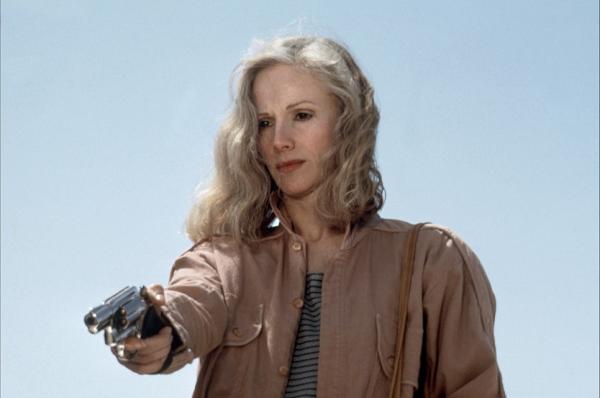 SUDDEN IMPACT is the Dirty Harry entry that I have frequently confused with THE GAUNTLET, because it happened in the same five-year period, shares scenes of mega-violence, and co-stars Sondra Locke, Eastwood’s longtime paramour and occasional co-star.  SUDDEN IMPACT is notable for being the first Dirty Harry entry that Clint directed himself.  That indicates some degree of personal investment. To me as an Eastwood-ologist, SUDDEN IMPACT is interesting mainly because it addresses a recurring theme in Clint’s work:  the victimization of women, and/or what is to be done about it.  In this film, Dirty Harry is tracking a serial killer, as usual, but this time the killer turns out to be a woman (Sondra Locke) who is avenging the sexual violence that was done against her and her sister.  The depiction of the subject matter isn’t exactly exploitative, but neither is it particularly complex.  The Dirty Harry solution is to blow the bastards away, and so it turns out that Jennifer Spencer, Locke’s character, is his kind of girl. That’s her solution also. It must be said that this is a departure from many of the urban thrillers of that era, which did trade on images of sexual violence against women for exploitative purposes, but obviously killing off the offenders Dirty-Harry-style, while temporarily cathartic, doesn’t do the victims much good in real life. You’d have to look elsewhere for a more sober consideration of the effects of rape. SUDDEN IMPACT could be a conversation piece if looked at in that way, but realistically, that’s probably not what most people are looking for from a Dirty Harry movie. This is where you come for the vicarious thrills of seeing human garbage like rapists getting blown off the screen by tremendous handguns. Sometimes that’s all you need. 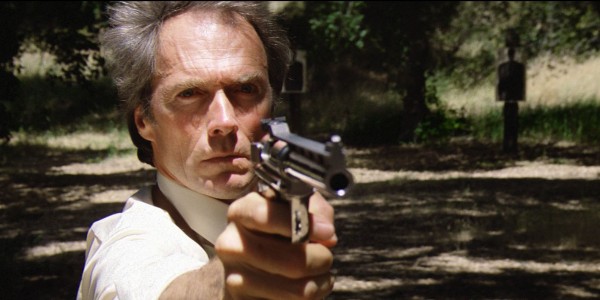 Even though SUDDEN IMPACT isn’t necessarily top-tier Clint Eastwood, it’s characteristically professional, constructed by a team of artisans with interesting credits and of course by Eastwood regulars. The cinematography is by Bruce Surtees, who shot two of Clint’s very best films, HIGH PLAINS DRIFTER and THE OUTLAW JOSEY WALES. The editing is by Joel Cox, who has worked for Eastwood on nearly every film he’s directed. The musical score is by Lalo Schifrin, who composed every Dirty Harry score besides THE ENFORCER (that was the great Jerry Fielding). The screenplay was written by Joseph Stinson, who later wrote some great one-liners for Clint on HEARTBREAK RIDGE, along with writing the fun but flawed CITY HEAT, where Clint teamed up with his old buddy Burt Reynolds. And the story idea was supplied by Charles B. Pierce, who horror fans know better from his classic proto-slasher film THE TOWN THAT DREADED SUNDOWN. Pierce had been the set decorator on THE OUTLAW JOSEY WALES and allegedly envisioned the story as a vehicle for Sondra Locke, amazingly enough, before it was turned into a Dirty Harry joint. Legend has it Charles Pierce is the one who gave Clint the line “Go ahead… Make my day.” That line has had a legacy all its own, and not many people know it comes from the fourth Dirty Harry movie, rather than the first. SUDDEN IMPACT is almost worth seeing just for all the times it’s been misquoted, but luckily that’s not all it has to offer.