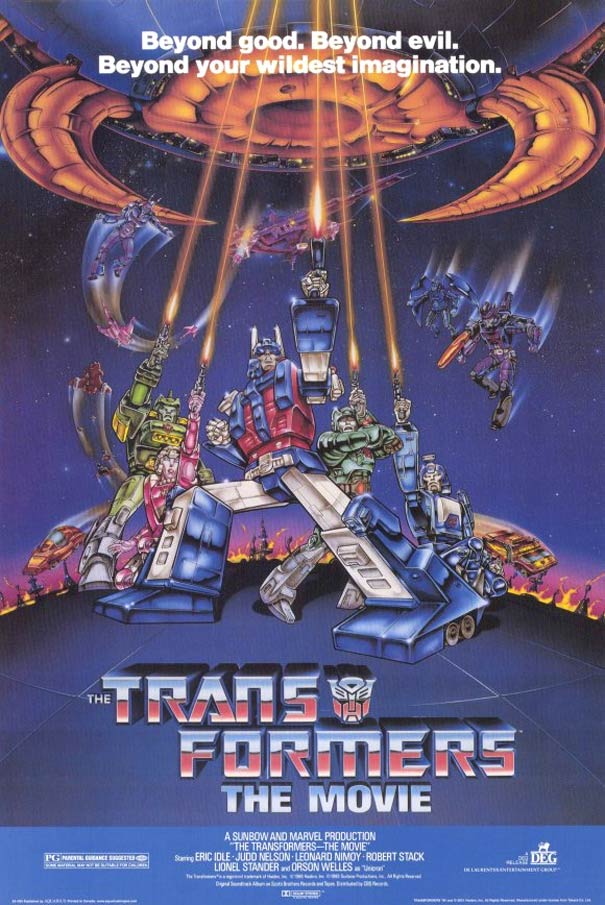 This week marked thirty years since the Autobots and Decepticons blasted their way onto the silver screen for the first time. TRANSFORMERS: THE MOVIE was a box-office bomb, grossing only $5,849,647 upon its release in 1986 which is surprising as the syndicated television series had wrapped up that January and was still successfully running after school and season 3 would continue the successful run from September 1986 until February of 1987 (Season 4 was a three episode mini-series that aired in the fall of 1987). One of possible reasons as to the poor reception to TRANSFORMERS: THE MOVIE upon its theatrical release may have been the violent nature of the film.

Cartoons in the ‘80s were constantly under fire from parents groups and consumer watchdogs for their content. Popular shows such as THE TRANSFORMERS, G.I. JOE, and later on TEENAGE MUTANT NINJA TURTLES were known for their action and adventure oriented stories, but there were rarely any real consequences that would befall our favorite heroes and villains. Laser blasts would just miss targets, Cobra Troopers would parachute out of their F.A.N.G just before they exploded, and Megatron’s schemes to collect energon cubes were always borderline harebrained… but nobody really got hurt.

TRANSFORMERS: THE MOVIE changed the game, featuring a slew of kids’ favorite Autobots being brutally offed within the first twenty-minutes of the film that raises the stakes of this eternal battle between good and evil. Watch that smoke ooze from Prowl’s mouth as his eyes go lifeless and argue that a robot’s death can’t be disturbing. The film’s writers even went so far as to kill off Autobot leader and fan- favorite Optimus Prime and his eternal rival Megatron, in a spectacular fight sequence that still can make a grown man cry.

“We had a serious issue of whether to kill Optimus Prime and the Matrix transitioning onto Ironhide, which we could not decide for several weeks,” revealed director Nelson Shin to Flickering Myth. “Optimus Prime was the leader of good guys. In the storyboard of mine, he should be killed, but when I asked if there would not be Optimus Prime toys any more after he was killed, no one answered it. I put much time into telling his death. In the movie, we all grieved for it.”

Of course by now all Transformers enthusiasts know that the main reason behind destroying most of the first wave of Transformers was to sell kids a brand new line of toys.

“To remove Optimus Prime, to physically remove Daddy from the family,” TRANSFORMERS: THE MOVIE writer Rob Friedman told Flickering Myth. “I told Hasbro and their lieutenants they would have to bring him back but they said ‘no’ and had ‘great things planned’. In other words they were going to create new more expensive toys.”

One of the more brutal sequences that were cut from the film was a scene that featured Ultra Magnus being drawn and quartered by Galvatron’s minions the Sweeps. The team over at The Spacebridge — a Transformers fan site — got a hold of the original storyboards and put together a sort of animatic of the scene, tying it together with audio from the film. According to The Spacebridge, this scene was in fact animated but cut due to its extremely violent nature. The sequence did make it into the Marvel Comics adaptation, which was based on an earlier draft of the script.

The Spacebridge also reassembled a sequence which the Autobots Tracks, Red Alert, Side Swipe, and Ultra Magnus taking on Devastator. According to The Spacebridge, this sequence was probably animated but cut as it broke up the flow of Optimus Prime’s ride to his final battle with Megatron.

The violence that permeates TRANSFOMERS: THE MOVIE was two-fold; not only did it make way for a brand new line of toys from Hasbro, but it prevented the film from getting a G rating, along with some bits of profanity. “Generally the film would be received a G rating, but with the swearing, it would be given a PG,” explains Shin. “It would mobilize more audience by letting kids bring their parents as well, which was the idea of executive producers.” However, it may have been too much for some younger children who couldn’t accept that Optimus Prime was not coming back… (Spoiler alert: He comes back twice in the third season). The backlash from Prime’s death in TRANSFORMERS forced producers to add a bit of ADR to G.I. JOE: THE MOVIE (completed prior to TRANSFORMERS, but released direct to video due to TRANSFORMERS’ and MY LITTLE PONY’s poor box office performance) revealing that Duke was not killed by Serpentor, but simply in a coma.

A new 30th Anniversary Blu-Ray of TRANSFORMERS: THE MOVIE is on its way from Shout! Factory this September. The new disc features a pristine 4k transfer, audio commentary from director Nelson Shin, and is chock full of extras, truly making this Blu-Ray more than meets the eye.