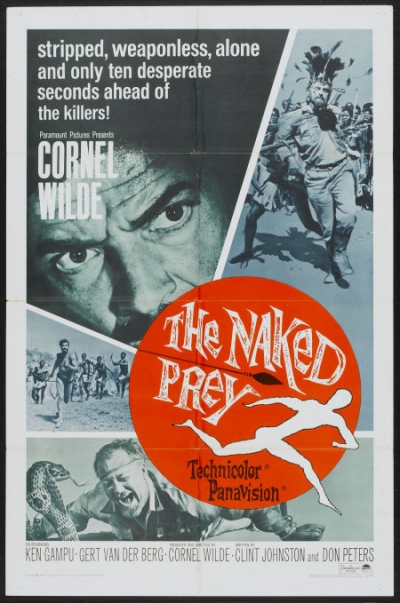 A group of pompous elephant hunters on safari in Africa get their deserved comeupins after refusing to bear gifts to a native tribe upon whose land they are traveling. After watching his companions die in a series of brutal, ritualistic slayings, the one poor bastard with a head (still) on his shoulders is saved to participate in a brutal game of cat and mouse with a handful of the tribe’s best warriors. Stripped down to nothing but the suit he was born in, this “naked prey” proves that he is a force to reckon with as he evades and picks off his hunters as they chase him across the countryside.

A film with a title such as THE NAKED PREY would usually land at least one smarmy joke in a write-up, but this Cornel Wilde production is just too damn good for any cheap shots. Serving as both director and star, Wilde’s brutal survival story remains one of the most stripped down action movies ever made. Minimal dialogue and the lack of a soundtrack help to give this film a truly primitive feel, adding a certain raw power to its scenes of hand to hand combat. Filmed entirely in Rhodesia (now Zimbabwe), Wilde cast African locals in a majority of the key roles, adding another layer of authenticity to the film. Easily one of the best African adventure films ever made.