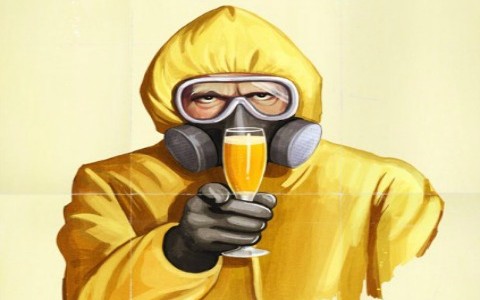 The awkward dinner party is a fairly standard set-up for a character-driven film or stage production, and not surprisingly so, as it serves as a solid foundation for both the writer and the performers to deliver great work. As long as the characters are well-defined and the actors game, you can just throw a bunch of them together in an isolated location and watch them bounce off of each other to great effect. Throw in some kind of all-encompassing event like a murder in order to move the tension from quiet to overt, and you can put together a genuinely involving film. It’s a DNA shared by films as diverse as CLUE and THE DISCREET CHARM OF THE BORGEOISIE, and while the set-up is the same, a creative writer and a solid cast can deliver an old idea in a new, entertaining manner.

IT’S A DISASTER, the new film directed by Todd Berger (also writer of the upcoming Brian Henson-directed puppet noir flick THE HAPPYTIME MURDERS), uses the awkward dinner party mold to great effect, switching out “dinner” for “brunch” and serving four couples with relationships of varying degrees of length. This would all seem like standard (and not really Daily Grindhouse) fare, were it not for the second-act catalyst, the revelation that a series of dirty bombs have gone off in the city and the group now finds themselves on the brink of an apocalypse. 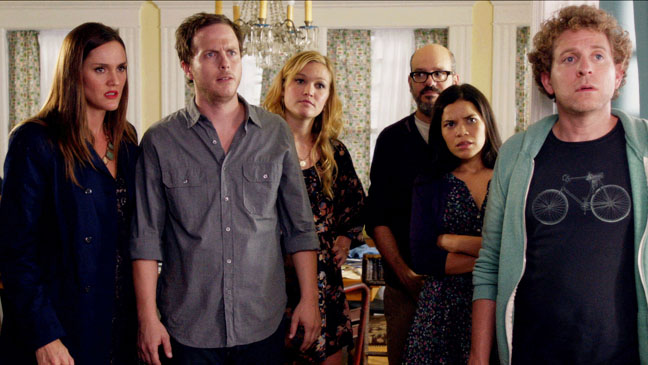 David Cross and Julia Stiles star as Glen and Tracy, as a newly-dating couple joining a group of Tracy’s friends in a long standing weekend tradition. The hosts, Emma (“Childrens Hospital”’s Erinn Hayes) and Pete (Blaise Miller) have been married for eight years and seem resolutely stable, and the same can be said for Lexi (Rachel Boston) and Buck (Kevin Brennan), though their happy-go-lucky lax attitudes toward everything serve as a counter to Pete and Emma’s more severe tones. Finally, there’s Hedy (America Ferrera) and Shane (Jeff Grace), who have been engaged for six years without commitment, and you quickly wonder how the comic book-obsessed control freak and a highly intelligent chemistry teacher got together in the first place.

It’s a solid set-up, and the first half hour runs the characters through the paces of clever banter, minor revelations and the sort of innocent, yet potentially loaded with drama, discussion that a group of people with a long shared history would have. Through it all, Cross’s Glen acts as the audience surrogate, being introduced to everyone and having to figure out exactly what the relationships between all of these people are while still managing to maintain their composure and present himself as someone Tracy is worth being involved with.

When characters realize the internet is out, however, they start to become suspicious that something is up, and after one major relationship revelation, the power goes out on perfect cue and everyone involved begins to panic. After a neighbor shows up in a hazmat suit (appropriately disgruntled about not being asked to the brunch) and explains the situation and that they shouldn’t leave the house for fear of radioactive contamination, all of the characters begin reacting in different ways, some going into shock, others examining their lives, and some just treating it as a huge joke.

With the vast range of reactions to the potential end of the world, IT’S A DISASTER turns into a darkly comic apocalypse film confined to a single house, as Shane reinvents himself as a survivalist, Lexi and Buck just try to enjoy the end of time via hedonism and Hedy quickly contemplates the gravity of the situation. The film’s finest moment of apocalyptic dark comedy comes when a pair of perennially late guests arrive, and Tracy chastises their lateness, refusing to let them into the house and forcing them to contemplate their lack of decorum as they die slowly from radiation sickness on the front stoop. 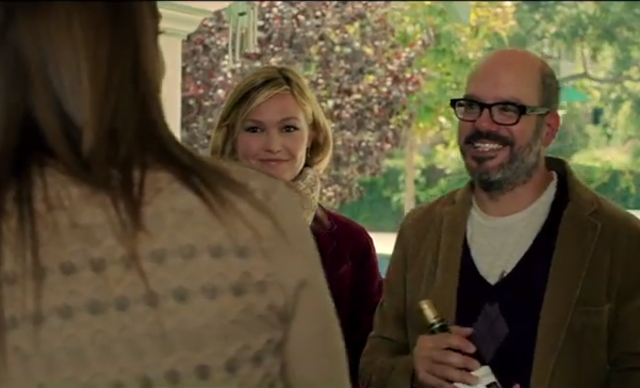 Berger wrings plenty of comic potential out of the situation, especially involving Lexi and Buck’s blasé attitude towards the end of the world. Like the apocalypse in the film itself and the incarnation of Tchaikovsky’s “1812 Overture” that plays over the opening credits, the conflicts between the characters rise and rise to a near climax and end up being decompressed just before an actual explosion, leading to some great comic tension in which a mushroom cloud of anxiety never quite explodes.

Among the recent batch of movies to pull humor from the end of the world, IT’S A DISASTER sits comfortably between the melancholy of SEEKING A FRIEND FOR THE END OF THE WORLD and the balls-deep zaniness of the upcoming THIS IS THE END, mining complex (yet easily identifiable) relationships for both humor and drama. The end result is an apocalypse movie where you genuinely enjoy watching the characters on screen and believe in their own unique coping mechanisms, even if you’d probably find spending an actual brunch with them a little on the excruciating side.