Episodes 9 and 10 of the second season of The Ray Bradbury Theater display both the dizzying potential and distressing reality of basing an international anthology show on a writer as diverse as Bradbury. With filming taking place in England, France and Canada, the production values have seemingly increased from the first season, and with Bradbury doing the adaptations the stories tend to be translated more-or-less intact, but there’s no consistency from one episode to the next. There’s no common voice or visual style, meaning that a wickedly comic morality tale like “The Coffin” can be placed right next to a spirited slice-of-life piece like “Tyrannosaurus Rex”, with the viewer having little idea what they might be getting on a week-to-week basis.

For some this could be an exciting proposition, and more in the mold of early anthology series’ which could feature comedy, drama or suspense depending on the material being adapted that week. But even with distinctly different material being presented, these portmanteaus tended to rely so heavily on performance rather than visuals that the viewer had a sense of continuity, especially as many of these programs were presented live. There’s little of such continuity here, and the move to international shooting in Season 2 has exacerbated the situation, with very little linking the episodes aside from Bradbury’s sly winks and obsessions. It’s a grab-bag, which – as we’ll see this week – can bring its share of pleasure and pain. 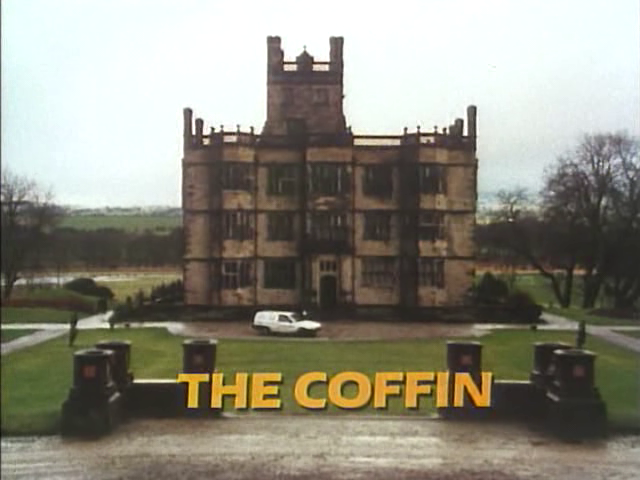 There’s a quite famous story about EC comics (the publishers of gritty genre comic-books like Tales From the Crypt) plagiarizing two works of Bradbury in the pages of one of their books, and the author responding with a playfully stern letter suggesting that he had “inadvertently” failed to be compensated for the work. While lesser authors would have – perhaps reasonably – sent a cease and desist letter and demand an outrageous sum in the face of such blatant cheekiness, Bradbury was a fan of the comics, and recognized the potential for his work to find a greater audience through the medium. EC comics would go on to (legally) adapt dozens of Bradbury’s short stories, and – as we’ve explored previously in this column – many hem quite closely to their source material.

“The Coffin” was adapted into comic form by the legendary Jack Davis in the collection The Autumn People, though it’s a bit surprising that a version never appeared in the pages of Tales From the Crypt, as Bradbury’s short story gleefully embraced the rather simple morality and ironic twist that typified the stories in that book. Here we have two quarreling brothers: one a brilliant inventor who recognizes his death is rapidly approaching, and the other a younger, aloof moocher who has spent his life embracing sloth. The older brother, Charles Braling, has spent the weeks before his death developing a marvelous coffin, and trusts that his boorish brother Richard will place him in the box after death. The greedy Richard instead has his brother buried in a plain pine coffin, thinking he can profit on Charles’ final invention.

Of course, once Charles’ climbs into the coffin he discovers that Richard foresaw his selfishness, and the cover locks tight before needles drain him of blood and fill him with embalming fluid. The coffin itself moves autonomously, bringing the disoriented brother to a predetermined burial spot as a recording of his brother’s voice delivers his eulogy. The story ends with mechanical arms sprouting from the coffin, digging a grave which the coffin then lowers itself into. A miracle device that commits the greedy to the ground.

Doesn’t it sound like an  episode of “Tales From the Crypt” or “Alfred Hitchcock Presents”? Thankfully, veteran TV director Tom Cotter manages to capture the spirit of those superior anthology shows thanks to the talents of two wonderful actors, and a script that only has to elaborate slightly on the original story. Here we have the wonderful Dan O’Herlihy as Richard, who surrounds himself in his mansion with robotic butlers of the type only found in 80s entertainment. His mechanical skills are better developed here, particularly as the story must have seemed much less in the realm of science fiction in 1988 against the comparatively primitive technology available in 1947. Equally as good is Denholm Elliott as the charming, but monstrous, younger brother Richard; bringing a believable villainy to a role that originally seemed a bit more mustache-twirling in the original text.

Aside from some business involving Richard’s fortune being sewn into the walls of the coffin, and the rather pleasantly dated robotic elements, this is a fairly straight-forward adaptation of Bradbury’s text. Things get appropriately claustrophobic in the final moments, and there’s a wonderful POV shot staring through the glass top of the coffin as it makes its way to its final destination. One of the better episodes of the Ray Bradbury Theater I’ve yet encountered, and proof that with solid story elements and quality acting the series can still deliver. 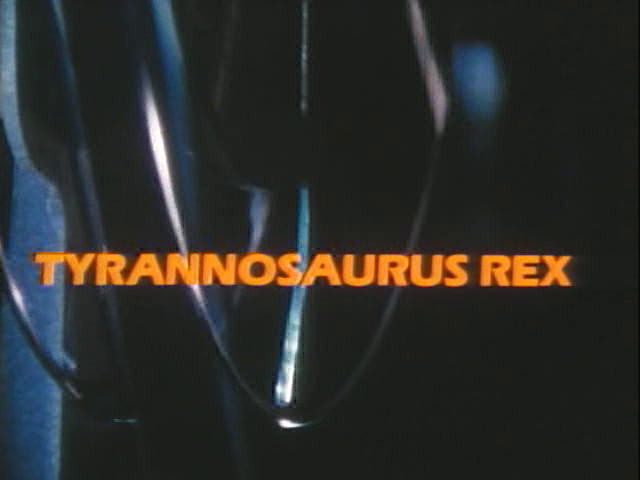 Episode 10 – Tyrannosaurus Rex
Originally aired: May 14th, 1988
Directed by: Gilles Béhat (Charlie Dingo (1987), Diamond 13 (2009))
Featuring: Cris Campion (Fortune Express (1991) , Fall from Grace (1994)), Jim Dunk (Made in Britain (1983), Absolute Beginners (1986))
Based on: “The Prehistoric Producer” by Ray Bradbury, originally published in The Saturday Evening Post on June 23rd, 1962. Later republished under the name “Tyrannosaurus Rex” in the collections The Machineries of Joy and The Stories of Ray Bradbury.

And then there’s this oddity. When Ray Bradbury was in his late teens he began a friendship with future Famous Monsters of Filmland editor Forrest J. Ackerman, and one day encountered another young man at Ackerman’s house who shared their love of Science Fiction and Fantasy. The other 18 year old ended up being an aspiring stop-motion animator named Ray Harryhausen, and the two formed a friendship that would last over 70 years, with Harryhausen later being the best man at Bradbury’s wedding. They would speak regularly for their rest of their lengthy lives.

I’m unsure how much of “Tyrannosaurus Rex” (originally published under the title “The Prehistoric Producer”) is based on anecdotes related by Harryhausen, but it sticks out rather visibly from the crop of stories that have been adapted for the series thus far. There’s nothing supernatural about the tale; in fact, it could easily be a story taken directly from either man’s experiences with film producers. It’s purely comedic, with no intentional suspense outside of whether its main character will escape the story with his job intact. It’s an entertaining story, but as the basis of an anthology episode it’s a bit confusing – particularly in its adapted form, which seems to distance itself greatly from the Harryhausen comparisons.

Terwilliger (the Harryhausen analogue) is a young animator who finds himself at the mercy of a tyrannical film producer who is less than impressed by the stop motion dinosaurs Terwilliger has been providing him. Working himself to the point of exhaustion, Terwilliger continually refines the look of the creature until, unconsciously, it begins to resemble the producer’s distinctive face and body – a fact that dawns on him after an unfortunate screening. Thinking himself fired, the artist is saved by the quick thinking of the producer’s assistant, who presents the imitation as a compliment – suggesting that Terwilliger has limitless respect for the producer, and immortalized him purposely in his work. This placates the furious producer, who continues to work with both the assistant and animator.

The television translation is hampered by a variety of odd decisions which drain a lot of the charm out of the original story. First, it moves the setting from the United States to Europe at some vaguely defined time in the past. Terwilliger (Cris Campion) is now a young Frenchman, with the producer (Jim Dunk) a gruff cockney with a horrific lump on his head. Yes, the clearest way that Terwilliger’s dinosaur creation resembles the producer is that it has the same misshapen skull, which makes Terwilliger’s inability to recognize the resemblance extremely difficult to believe. Even more difficult to believe is that the resulting creature, with its lumpy body and ridiculous looking face, would be seen as acceptably terrifying or impressive. The brief flashes of animation (by French animator Jean-Manuel Costa) we see have little of the charm and detail of Harryhausen’s work, and simply look cheap. 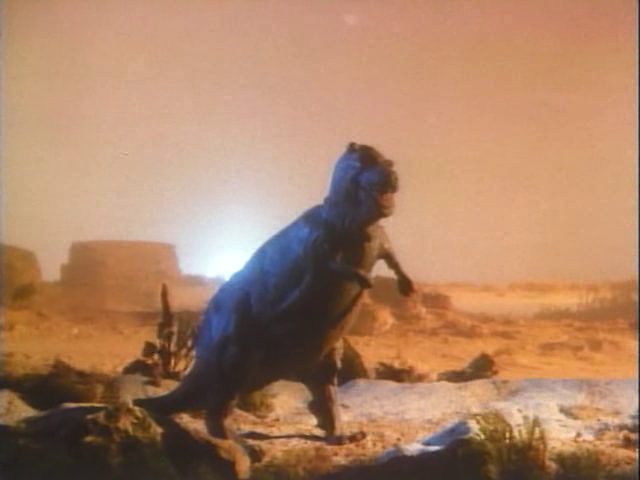 Removed from autobiography, “Tyrannosaurus Rex” is simply a forgettable, vaguely comedic tale which will hold little appeal except for those fascinated by the early days of stop-motion animation. Even then, we only get the occasional flash of the mechanics involved, with little insight into the craft or the laboriousness of the process. The relationship between Terwilliger and the producer’s assistant is developed slightly more than in the original story, but aside from a cute final gag involving the assistant’s daughter, it doesn’t really add to the episode. An interesting example of just how far The Ray Bradbury Theater could move outside the trapping of science fiction and fantasy, but still an unfortunate failure.