The more I watch of The Ray Bradbury Theater, the more of a sense I get of just how involved Bradbury was in its production. On the surface, there isn’t anything particularly unique about the show itself. It lacks the consistency of The Twilight Zone or Outer Limits. It doesn’t have the polish of Alfred Hitchcock Presents, or the blackly comic violence of Tales From the Crypt. It’s a wholly more sedate and – occasionally – experimental venture, and that’s due to the man whose work inspired it.

These final two episodes of the first season really show off the expansive talent of the author and the variety of the works he penned. The first is an eerie mystery from the perspective of a young girl, and is preceded by a short piece;  once again featuring Bradbury himself. It’s an interesting, almost Hitchcockian episode, but more noir-ish in its original short story form. The second is something much more unique; a story based on an autobiographical incident from Bradbury’s life. More elaboration on the story, and the incident that inspired it, can be found in Bradbury’s 1992 novel Green Shadows, White Whale. 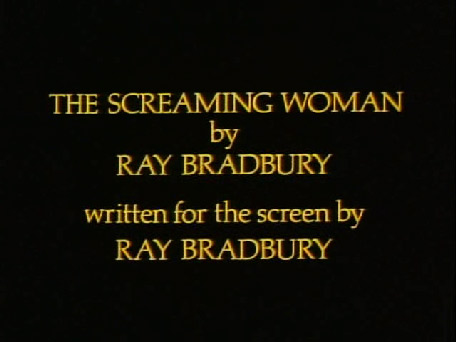 As I mentioned in the inro, one of the great pleasures of dipping into this series is seeing the variety of story types that can be told within the anthology format. While suspense portmanteaus have fallen out of favor in recent years, there’s a great pleasure in simply seeing a complete story told within 30 minutes that doesn’t require three seasons of backstory to be able to understand. This sort of concise storytelling has become a bit of a lost art, and can be truly invigorating when done right.

The original story of “The Screaming Woman” has a very simple, but engaging, hook. A young girl is returning home and crossing a vacant lot, when she suddenly hears a scream from beneath the ground. She runs home to tell her parents, but is accused of having an overactive imagination; and is summarily dismissed. Desperate to help, she attempts to dig up the woman herself, and is soon joined by a friend who thinks the scream is some sort of ventriloquist act. Scared off by the owner of the lot, the girl decides to take matters into her own hands and begins knocking on the doors of all the houses in the neighborhood to see if there are any wives missing. She eventually comes upon the suspicious Charles Nesbitt, who intentionally delays hour in the guise of waiting for his wife to come home. Believing all is lost, she returns to the lot only to hear the woman – possibly gone mad – singing a song. It’s this song that convinces her father she’s telling the truth, as it’s one the woman – a former lover – had actually written for him; and which he had never sang to his daughter.

A darkly comic look at murder from a uniquely childlike point of view, The Screaming Woman strikes an enjoyable tone that captures both the frustration and exhilaration of youth – subject matter that Bradbury would return to again and again. It’s particularly amusing in the first half, where Margaret’s attempts to save the buried woman are continually thwarted by her parent’s inability to take her seriously.

It’s a work that begs for a fairly straight adaptation, and thankfully THE SCREAMING WOMAN is exactly that. It’s prefaced, like THE TOWN WHERE NO ONE GOT OFF, with a short piece featuring Bradbury (playing himself) surveying a scene with some binoculars until a gentleman (played by Clarke Gordon) with a dowsing rod wanders by (“You’re that crazy writer fellow!”). Bradbury tries out the rod, and is told by the man that it has the ability to douse out a lot more than just water, which – is implied – what inspires this week’s episode. I’m not sure if this is supposed to represent an event in Bradbury’s own life, but it’s a fun diversion before actual episode begins.

Since Brabury’s original radio play was written in the 1950s, some updating is necessary to bring the story up to its mid-1980s setting. The young girl (played by Drew Barrymore) is now shown to have a strong imagination and fantasy life, and spends her time reading old Tales From the Crypt comics and hanging around construction sites. Her parents are now playfully skeptical rather than strictly inattentive, and the friend suspects it’s a buried tape player instead of some sort of ventriloquist act.

However, the most notable difference comes at the end, where the girl visits the burial site and is confronted by Mr. Nesbitt (played by a delightfully sweaty Alan Scarfe). While the original story doesn’t reveal Nesbitt’s fate, here he’s attacked and knocked unconscious by the girls’ father, and we actually get to see the woman pulled out of the ground to safety. It’s all a bit melodramatic, but does little to mute what is a wonderfully creepy adaptation. 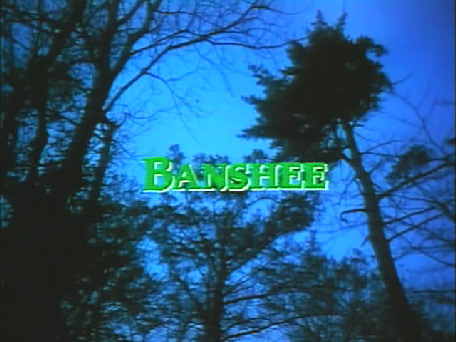 From all accounts, John Huston was an incredibly complex and difficult man. A larger than life figure both on-screen and off, who was responsible for some of the most lauded and well-regarded films of his era. When a young Bradbury was hired to pen a script for Huston’s adaptation of MOBY DICK, he could hardly have imagined the tumultuous and combative relationship that was to develop. Huston would taunt and ridicule the writer; alternately praising his talents and ripping him to shreds. And Bradbury responded in the only way he could – by writing a partially fictionalized account of an incident between the two, and creating a reality where he could get the upper hand.

“Banshee” remains a haunting story, presenting Bradbury (here called Douglas Rogers) as a meek, sensitive soul who is equally in awe and overwhelmingly frustrated by his host. John Hampton, the Huston analogue, is a bombastic beast of a man, commending Rogers for his talent and then humiliating him by quoting from a negative review (before jokingly(?) confessing that he was the review’s author). He’s a man alternately tender and cruel; even using the Irish countryside that surrounds the pair to his advantage. He spooks the young writer with a ghost story about a Banshee; a wailing female ghost that spells impending doom for those who encounter it. Rogers, forced outside, ends up encountering the (very real) woman, who has mistaken the womanizing Hampton for her own unfaithful lover from when she was alive.

When Rogers returns to the house, he initially sends Hampton out to meet the woman – knowing that her intention is to kill the man who she believes is her former beloved. However, he quickly returns to his senses and attempts to stop the headstrong director from meeting his doom. Alas, he’ll hear nothing of it, and the story ends with Rogers hiding away in his bed as John leaves for his encounter with the Banshee.

It’s awfully spooky and atmospheric, with a touch of humorous schadenfreude in the sadistic directors’ supposed fate. In Bradbury’s novel Green Shadows, White Whale the story is presented within a greater context, and the unnamed Bradbury equivalent presents the real-life director with the story when he’s finished writing it; who responds by muttering that there will be no more jokes. Bradbury might have been acquiescent compared to the great director, but few were more powerful with their words.

The credits suggest that this episode at one point featured a pre-story sequence with Bradbury once again playing himself, but neither the DVD version or any version I’ve seen online seems to include it. Quite curious. However, it’s hardly missed in the context of this wonderful adaptation which barely strays from the text of the original story, and features a wonderfully hammy performance by Peter O’Toole as the director “John Hampton”.

Striking the right balance between menacing and playful, O’Toole embodies the bluster of the character, while Charles Martin Smith gets the thankless task of playing the entirely more sedate writer. The interplay between the two is presented beautifully, and while the appearance by the ghostly banshee (played by Canadian actress Jennifer Dale) is hardly terrifying; the whole story is wonderfully macabre. There’s no onscreen violence and barely a raised voice, but it still manages to hit the right spooky notes.

Less effective is the surrounding filming location. Mississauga, Ontario is quite lovely, but can hardly be mistaken for Ireland – even with the inclusion of a brief scene of a cab driver attempting a particularly poor Irish accent. Still, while the nearby woods doesn’t quite have the romanticism of Bradbury’s prose, the mansion in which most of the action takes place looms appropriately. It makes for a fine adaptation, and shows just how flexible – and impressive – the anthology format can be.

And with that, the first season of The Ray Bradbury Theater comes to a close. I’ll be back in a little while to start tackling Season 2. We’re getting ever closer to the episodes that scared me out of my wits as a child.