Now that we’re getting deep into the series, I have to come to terms with what attracted me to THE RAY BRADBURY THEATER in the first place. I was peripherally familiar with Bradbury in the late 80s, but it certainly wasn’t a developed fandom – I would likely only have recognized a handful of his works. Certainly the subject matter wouldn’t have held any particular attraction for me, as I would intentionally shy away from “horrific” material as a child. But there was something about the series that had a pull over me… perhaps it was the variety. Or perhaps it was the Canadian-ness of the whole thing.

Yeah, the show was incredibly Canadian. Recognizable (to me) Canadian actors would pop up regularly, and most could hardly hide their distinctive accents. It even looked Canadian, with its many small-town Ontario settings (not that I would have had much personal experience with these locations). I suppose it just felt familiar to me, and that familiarity allowed me entrance into the many fantasy worlds it created. Once there… yeah, I was terrified. But, I was also entranced by the variety of material, and by Bradbury himself. 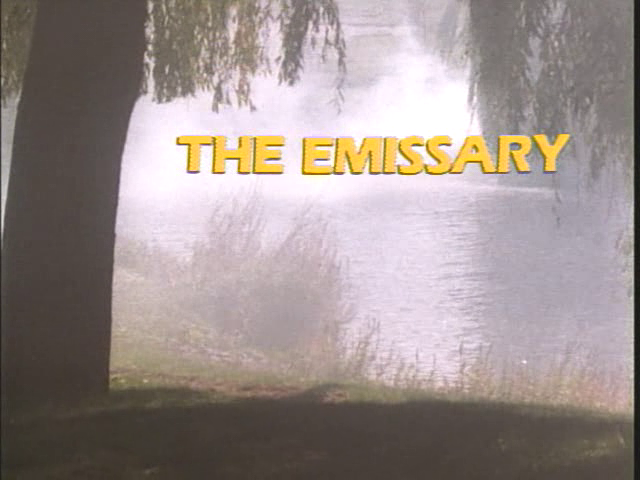 We’ve reached it, by the way: The episode that most terrified me as a child and continued to haunt my dreams for many years afterward. The seven year-old version of myself may have been overly sensitive (I bawled during a childhood reading of “Bridge to Terabithia “), but I’d like to think my fear was at least partially justified; even if much of “The Emissary” is a bit predictable – at least in television form.

The short story “The Emissary” is full of the distinctive Bradbury descriptive text that I’m getting more and more familiar with as I blaze through the impossible depths of his short story writing. His prose is so full of familiar detail regarding the shades of Fall that you can almost feel the texture of the dried leaves and smell the pumpkin spice in the air. And it’s entirely appropriate in a story about a bed-ridden youth, sick with some unnamed illness, who relies entirely on his dog (named “dog”) to bring him remnants and echoes of the outside world. This includes people, as eventually the dog returns with the boy’s teacher; Miss Haight, and the two strike up a fast friendship.

But only a few paragraphs later, Miss Haight is dead. Taken away in a car crash that leaves the boy traumatized, and frustrated with a God that leaves people “just laying there” underground. His grief increases with the disappearance of “dog”, which leaves him without someone to bring back the world to him. At least until the pet’s return, shortly after Halloween. He’s been digging in the cemetery, and he’s brought Miss Haight back with him…

The story is shockingly economical, but manages to convey both the wonderment of youth, as well as the blunt reality of death. It culminates in a brief, terrifying supernatural coda that feels wholly modern despite the story originally being published in 1947.

Translating this into an episode requires some necessary fleshing out, and unlike most Bradbury episodes, it actually makes the story significantly more potent. Time is spent developing the relationship between the young Martin (Keram Malicki-Sánchez) and Miss Haight (Helen Shaver), and we get to see the young boy’s fascination develop into an obvious childhood crush – revealed in the writings in his journal, which use some of Bradbury’s own descriptive text from the story. Her familiar singsong greeting of “comp-any” is established quickly, and one could easily mistake the episode as being a simple coming-of-age story.

That is, until Haight’s death. Aside from Dog not vanishing for quite so long a period – and the ending taking place on Halloween instead of slightly after – the details remain very close to the source. Director Sturla Gunnarsson really captures some creepy atmosphere in these final moments, particularly in some first-person shots of the dog rushing back home, and the suggestion of something malevolent accompanying him. It reaches a fever pitch not only rare for the series, but rare for an anthology show in general.

But I was most surprised by the final few moments; the ones I remember frightening me so severely as a child. In fact, while it’s still quite effectively creepy – particularly the brief shot of rotten, zombie-like hand pushing open the bedroom door – it actually ends on a fairly hopeful note with Martin’s face changing from fear to something approaching glee as the familiar “comp-any” rings out on the soundtrack. We never actually get to see the corpse, but it’s a startling, effective episode that shows both devotion to the source and a willingness to expand from it. 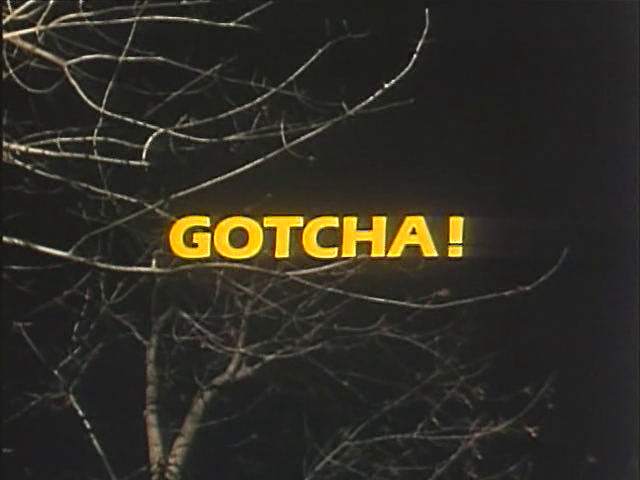 While the fairly straightforward narrative of “The Emissary” made it a natural for adaptation, Bradbury’s story “Gotcha!” made for an odd choice to turn into a teleplay. At heart, it’s about how passionate love can start to erode once the trust between lovers is lost – but much of what makes the story work is based on implication and suggestion rather than visuals.

Beth and Charles are already deep within a glorious love affair when the story begins, and they seem perfectly content in their love and lust until one morning Beth casually mentions the titular game of Gotcha! Devised by Beth, the rules are only vaguely presented. Charles is intrigued, and agrees to play the exceedingly simplistic game, which involves nothing more than Charles laying on a bed in a darkened room while Beth does everything within her power to terrify him. It starts very simply, but as his potent imagination starts to get the better of him, Charles becomes horribly stricken with fright that he ends up weeping into Beth’s arms from his terror.

The next morning they assemble for breakfast, but Charles is still shaken. Instead of the perfect, pure love they once had, they’ve both revealed something of themselves – and Charles is unable to think of Beth, or their relationship, in the same way ever again. The story ends with Beth offering Charles the chance to play Gotcha! again, but this time with him being the aggressor. He refuses with tears in his eyes, recognizing this incident marks the beginning of the end of their affair.

At least partially based on a real incident in Bradbury’s life, “Gotcha!” is such an emotionally dense story that much of what makes it special can’t help but be lost by doing a straight translation. Perhaps recognizing this, the author works in elements of another short story – “The Laurel and Hardy Love Affair” (published in 1987 in Playboy Magazine) – to flesh out the characters and their relationship. He’s also helped along by the casting, with instantly recognizable character actor Saul Rubinek making for a properly sympathetic Charles, and a realistically playful and intriguing Kate Lynch as Beth.

They meet at a costume party, dressed like Laurel and Hardy, and their relationship develops quickly. It all seems much more sweet and involving than the desperate love described in the short story, which actually serves to make the actual game of Gotcha! – performed in a sleazy motel – and its aftermath seem a bit more depressing. The game itself is presented creepily enough, though it’s not until Charles pictures a near-demonic version of Beth that there’s actually anything resembling a scare. The fallout, where the formerly warm and outgoing Charles sits in silence, tears welling in his eyes, is both heartbreaking – and a bit confusing. Without the insight into his mentality, it all just seems a little foolish. Good performances, but some stories are just not as well suited to the format.