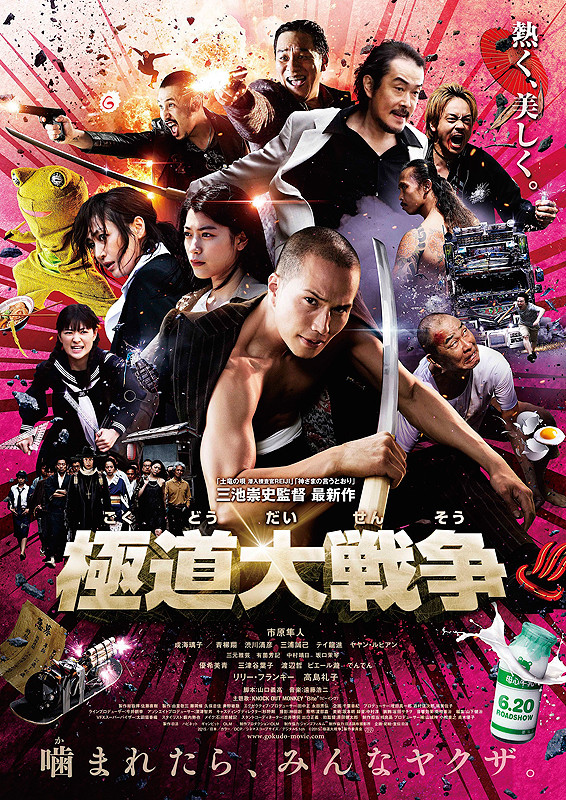 YAKUZA APOCALYPSE has to be one of the most crazily bizarre films that I have ever seen; a brilliantly concocted mix of where vampires and samurais fight to the death, and the most feared warrior is a ninja frog. Although I had never seen works by the director Takashi Miike before, the synopsis appealed to my kung-fu vampire sensibilities. I was expecting a souped-up BLADE.  I was wrong. 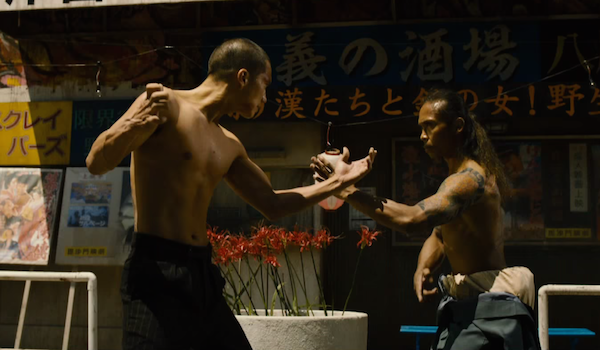 Yageyama (Hayato Ichihara) has grown up with aspirations to be a Yakuza, for the simple reason that “Yakuza means man.” Like the GODFATHER, CASINO, and GOODFELLAS, this is a town where the mob rules – a glamorous lifestyle fetishized by the young men who worship them as their heroes. He starts as an apprentice to boss Kamiura (Lily Frankly), the Yakuza boss whose vampire secret identity is revealed when he meets a gruesome end at the hands of ‘slayer’ – who appears to have time travelled from 17th Century New England with his coffin-shaped rucksack of guns – and martial-arts killing-machine Kyoken (Yayan Ruhian from THE RAID films), who twists off Kamiura’s head with his bare hands. As Yageyama cradles his deceased mentor’s head it reanimates itself and bites Yageyama, thus turning him the head Yakuza Vampire. Are you still with me? 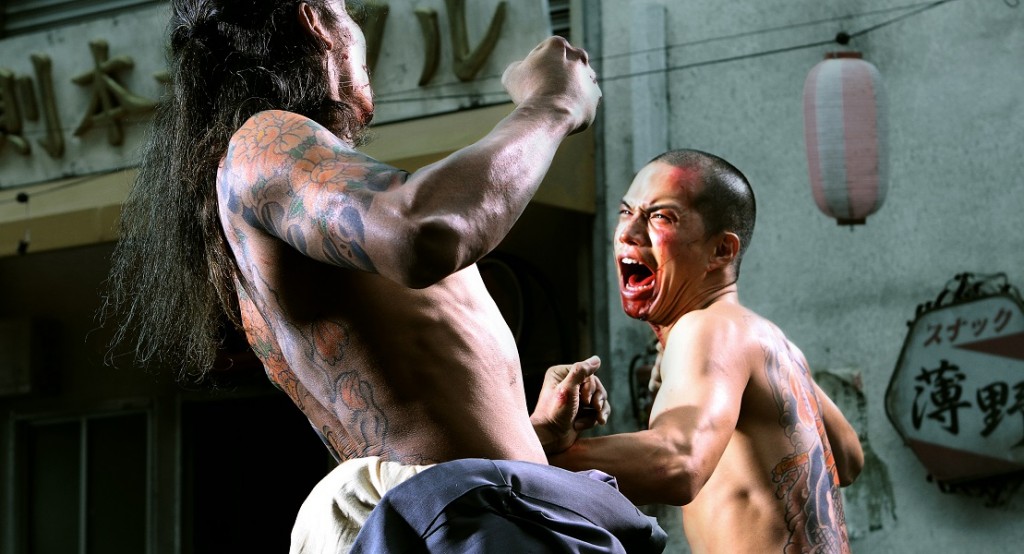 Yageyama does what every new vampire does: he bites the first thing he sees – a tasty civilian – and thus begins a chain where vampires begin to outnumber civilians. The only person he refuses to turn is Ky?ko (Riko Narumi) his recently blinded love interest. He learns from an elder the art of vampire dining, i.e that civilians are tastier and more nourishing than the bitter and empty calorific Yakuza vampires. Therefore, he must take a small amount daily, “about the size of a can of soda.” This is all before the arrival of Kaeru-Kun, a deadly assassin who dresses in a frog suit and whose arrival predicts the end of the world (a fantastic reference to one of the Plague of Egypt), and who walks into town swiftly dispatching flying roundhouse kicks to everyone in is path. So deadly and menacing is that he is unable to see properly in his costume and so needs help navigating stairwells. Yes, that is correct, a dangerous six-foot frog assassin needs someone to hold his hand like a child while navigating stairs.

The plot is fast and frenetic with some many “what the…?” moments that I would run out of room explaining them all (and ruining a few surprises). The scenes between Yageyama and Ky?ko offer a tender respite and a chance to catch your breath in what is otherwise a completely exhausting and anarchic two-hour experience. It is not a film for those who like ordered chaos and will instead appeal to those who like visually exciting movies that prioritize style over substance. It is a brutal martial arts-vampire-comedic-ludicrous experience that leave you feeling mentally exhausted afterwards. Don’t say I did not warn you.