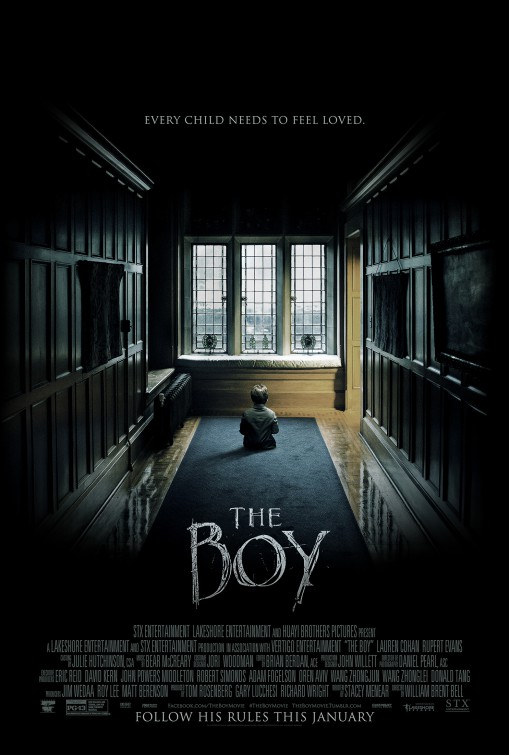 Horror movies face a major hurdle when it comes to the hardened viewer. The more scary movies a person has seen, the more immediately apparent the genre signposts become. If fear is based most in the unknown, and if shock depends on an audience not seeing what’s coming, then the veteran horror fan is a January theatrical release’s mightiest adversary.

All I can tell you is that THE BOY cleared the hurdle with me.

Horror films work best as intended on the greenest of us. They have a tougher row to hoe with the over-thinkers and the battle-worn. I’ve watched several more would-be scary movies than the average human, and no, that doesn’t make me more brave than anyone else; it just means I’ve put in the time. That means that while the gaggle of teenagers seated in the row behind me shrieked and leapt at every act-one jump scare, I’m the type to start contemplating what THE BOY‘s final twist might be as soon as the plot is set in motion.

That’s not even totally true, by the way.

If you know me even a little, you know I started thinking about THE BOY long before I ended up in my seat, and probably as soon as I first heard the preposterous high-concept: A young American woman (Lauren Cohan from The Walking Dead) who needs a reason to leave the country manages to score a child-rearing gig at a remote estate somewhere in England (played by Canada). The bereaved-looking elderly couple who own the house (played by Diana Hardcastle and Jim Norton — the Irish character actor, not the American comedian) have a surprise in store: The child in question is not an eight-year-old boy, though they insist on treating him as if he is one — he’s a nattily-attired porcelain-faced doll, with the perfectly just-short-of-hilarious name of Brahms. When the old couple leaves the nanny alone in the cavernous manor with Brahms, the weirdness begins. Is the nanny losing her mind? Or is the doll really alive? And if he is, what exactly are his intentions?

Here’s the steep summit THE BOY needed to surmount with this audience member: I’m not afraid of dolls. I’m not afraid of children. What scares me about THE EXORCIST isn’t the little girl with her head spinning around; it’s the philosophy behind the piece. The business with Father Karras and his mother, the fact that a man who’s lost his faith only gets it back when he sees the Devil is real — that’s where the deep stuff is, to me. I don’t know about God and I don’t know about the Devil, but I do know there’s true darkness in the world, real malice and cosmic injustice that sometimes no amount of decent action can defeat. We do our best, but sometimes we lose, and sometimes we lose even when we win, and that’s just how it is. These are the sort of things that keep me up at night. Ghosts and goblins are always a fun diversion, but when it comes to troubling my mind, there’s enough horror in daily life these days. As much affinity as I have for the murder-doll genre, it’s hard for me to even pretend to be spooked out by plastic.

For me, I look to any movie in any genre to see something I haven’t seen before, or to see something I’ve seen before in a new light. I like something that sparks my imagination, that gets me to thinking, that makes an introverted soul like me want to open up and share my thoughts with other people. The world weighs heavily sometimes and it’s good to have art or schlock — either will do — to keep a busy mind occupied. I like horror movies as much as I do because even the quote-unquote bad ones tend to offer the most unlikely, incongruous, and bizarre sights. Why the pluperfect fuck would I go out after a two-day snowstorm to see THE REVENANT when I could for the same expended effort watch a possibly-haunted British-accented murder-doll named “Brahms Heelshire” ruin some lady’s shower? I already know full well life is hard, thanks — now what else can you show me?

That is to say, I don’t personally need a horror movie to be frightening as much as I need it to be different. THE BOY has several effective funhouse moments, staged and lit as they are by veteran cinematographer Daniel Pearl (THE TEXAS CHAIN SAW MASSACRE), but I’m not here to tell you that the movie scared me out of my socks, because I’m not sure that’s possible at this point. I’m only here to tell you that I’ve seen hundreds of these things, and this is one that surprised me. I did not see where THE BOY was headed, and not for lack of trying. When it finally got there, I laughed with demented delight. Sometimes that’s what you want from a horror movie: A good wicked laugh. PSYCHO, HALLOWEEN, A NIGHTMARE ON ELM STREET, those are movies that give me unsettling dreams. THE BOY isn’t out to do that, I don’t think. Have you seen a movie called ORPHAN? That’s a more amenable point of comparison. It’s a see-it-for-yourself and let-no-one-spoil-the-ending sort of crazy. It’s high camp that only succeeds because it’s played so gravely all along. THE BOY isn’t a harrowing horror experience, but it’s a movie that’s got a great deadpan, and that ain’t nothing. 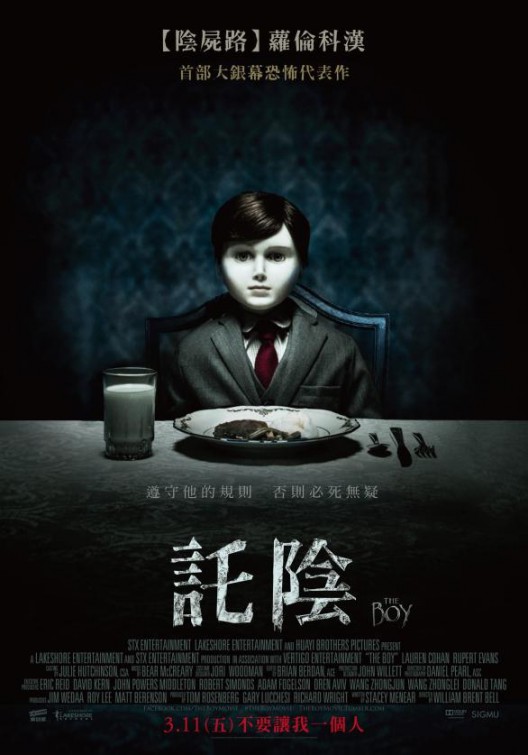