Shout! Factory’s Scream Factory division has been doing a wonderful job of bringing fringe release films to the Blu-Ray format and METALSTORM: THE DESTRUCTION OF JARED-SYN is no exception. The Charles Band directed sci-fi action movie gets high quality treatment with a crisp transfer and a nice selection of extras all wrapped in a sharp looking case with two discs depending on if you have access to a 3-D television and wish to see the movie the way it was released. The good news is that those of you less fortunate, like this reviewer, still get a highly enjoyable bit of sci-fi action that plays out like a lower key blend of THE ROAD WARRIOR and STAR WARS, in particular A NEW HOPE. 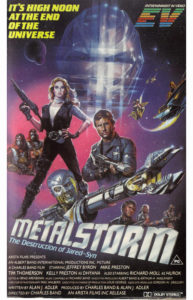 METALSTORM: THE DESTRUCTION OF JARED-SYN follows the heroic ranger Dogen (Jeffrey Byron) as he ventures across the desert planet of Lemuria to bring the villainous Jared Syn (Mike Preston, who actually was in THE ROAD WARRIOR) to justice before he brings about a cataclysmic event that threatens the galaxy! As if the stakes weren’t high enough Dogen also has to rescue the beautiful Dhyana (Kelly Preston) whose father is struck down in cold blood by Jared-Syn’s malicious son Baal (R. David Smith) who is hot on the heels of Dogen seeking to put an end to the do-gooder’s quest. Along the way Dogen ends up seeking the help of Rhodes (Tim Thomerson, a Charles Band film favorite), a wisecracking and seemingly selfish ex-ranger who wants nothing to do with the seemingly impossible mission. 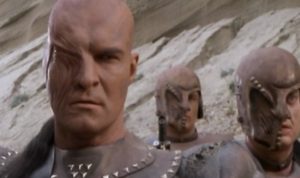 Overall this is an incredibly enjoyable movie and if you are a fan of Band’s work who might have missed it’s 2010 DVD release that had such a terribly boring looking case that did little to entice you to watch it, you should definitely pick up this Blu-Ray. It’s a fun blend of sci-fi aesthetic complete with flying bikes and lasers along with some fantasy elements thrown in wrapped up in a western style package. Like most of Band’s film’s he took a seemingly clichéd idea and did his own sort of thing with it. While it looks THE ROAD WARRIOR, it feels more like STAR WARS but without getting to the point where you would call this a rip-off. The use of magic and mysticism in the universe makes it really feel like there was supposed to be more to the METALSTORM saga and if the film did better we could have seen the continuing intergalactic adventures of Dogen, Dhyana and Rhodes as they continue the hunt for Jared-Syn. Hopefully this release will get more people interested in the universe and we could see some sort of continuation in the form of a comic or something along those lines, as that seems to the be trend nowadays. 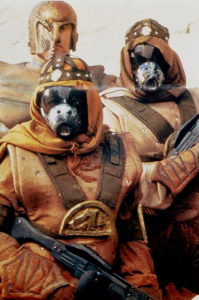 The presentation on this Blu-Ray continues Scream Factory’s trend of giving these films high quality releases. The transfer is divine. Before you watch the actual film I highly recommend checking out the theatrical trailer on the disc because it will really help drive home how much effort they put into restoring the film. The colors pop and even though the movie takes place on a desert planet it has a lot of scenery that will really jump out at you when looking at it in high-def. The featurette “High Noon At The End of The Universe” is a great companion to the film that goes behind the scenes with cast and crew and gives a great deal of insight on what went into the film. It’s a well-made and interesting look at the how and why and features some great interviews with Byron and Thomerson as well as Alan J. Adler who penned the script. The still gallery is another nice bonus featuring even more behind the scenes images and some cool promotional material such as images of the script and some concept art for the poster, you also get a fun little radio spot for the film. 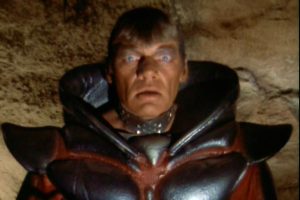 All in all this is a solid addition to any cult film fans collection and is another win for Shout! Factory. If you remember seeing this film or you are, like this writer, someone who had never seen it before this is easily the definitive way to see it. 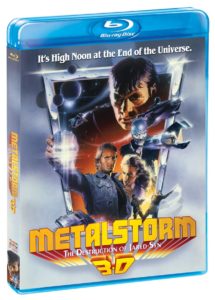 METALSTORM: THE DESTRUCTION OF JARED-SYN is now available on Blu-Ray on courtesy of Shout! Factory.