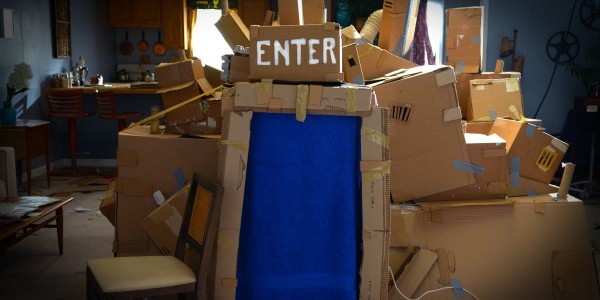 2017 heralds the arrival of the fourth Chattanooga Film Festival and the first year I have been able to attend. In its relatively short existence, the festival has acquired a stellar reputation with its programming of indie genre offerings and promises to be a treasure trove of films for DAILY GRINDHOUSE readers looking for something new.

DAVE MADE A MAZE

Things got off to a great start with the charming, breezily surreal DAVE MADE A MAZE. Co-writer/director Bill Watterson has crafted an alternately sweet, sad, and macabre tale of thirty-year-old Dave (Nick Thune) and his search for meaning in what he sees as a meaningless existence by constructing a labyrinth made of cardboard in his small apartment. The only problem is that the labyrinth, through some magical property, is much larger on the inside than is possible. When he gets lost in his still under construction project, it falls to a group led by his girlfriend Annie (Meera Rohit Kumbhani), his best friend Gordon (Adam Busch), and a wannabe documentary filmmaker (James Urbaniak) to enter the labyrinth to rescue him. But when they discover Dave was not joking about the interior size of the labyrinth, they become lost as well and have to deal with booby traps and a bloodthirsty Minotaur that every self-respecting labyrinth has to include.

During its uneven first fifteen minutes DAVE MADE A MAZE comes close to bordering on too twee for its own good (complete with a score that is sometimes incessantly whimsical to the point of poking the audience in the ribs to make sure they get the tone). But once the rescue party enters the labyrinth and encounters the fantastic production/art design by Trisha Gum, John Sumner, and Jeff White, the film kicks into gear. Kumbhani is the breakout of the ensemble cast as she gives Annie the sad soul of a young woman who has her shit together and is in love with a guy who has potential, but has yet to come close to meeting it. Her performance mirrors the best aspects of the movie with equal parts bemused humor, wonder, and sad reflection on missed opportunities. Busch and Urbaniak provide great comic relief and act as pragmatic, droll eyes through which to see the occasionally dangerous whimsy of Dave’s expansive imagination.

Oh, and it features what may now be my favorite movie decapitation I may have ever seen. If that’s not a recommendation, I don’t know what is. 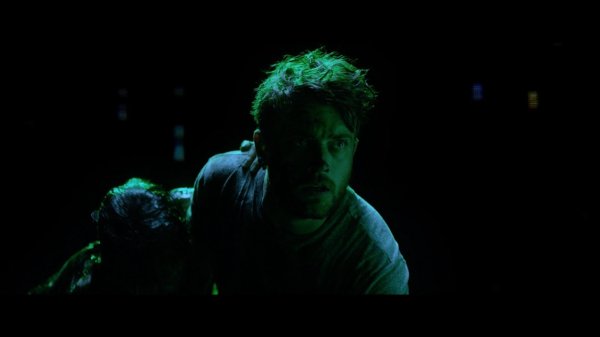 I almost feel like I should not even be writing anything about SEQUENCE BREAK just yet. As of writing this, it has only been about an hour since it ended and I already know that I will need to see it again to completely sort through the myriad ideas at play in this densely plotted and trippy film.

What I can say is that writer/director Graham Skipper has a firm handle on nightmarish imagery (aided by some seriously gooey special effects) that calls back to everything from VIDEODROME to HELLRAISER to FROM BEYOND. As is to be expected from an actor who directs, the performances are rock solid with Chase Williamson pushing through and delivering a simultaneously haunted and charming turn and Fabianne Therese giving a real scrappy underdog presence to what could have been a thankless girlfriend role.

As I already said, I need another viewing of the film to unpack everything it is trying to accomplish and decide if I feel it succeeds at its lofty goals. That said, I love to see films at this low budget level go so ambitious, which puts me on the side of SEQUENCE BREAK.

Between Williamson’s talented but aimless character trying to find a direction for his life and the semi-similar arc of the titular character from DAVE MADE A MAZE, we already may have an inadvertent running theme for the festival.

This short film, written and directed by actor Matt Mercer, played before SEQUENCE BREAK. It’s a zippy, freaky little comedy/horror tale that has fun performances from Skipper, Najarra Townsend, and Stacy Snyder. While we have seen this kind of baby-sitting gig gone awry tale before, Mercer keeps it flying along at a nice clip and takes full advantage of some cringe-worthy gore provided by special effects artists Josh Russell and Sierra Russell (who also did the excellent special makeup effects for SEQUENCE BREAK). If you run across it at a festival, it is well worth your thirteen minutes.