The history of the movie poster is as old as the history of the movie itself – since the dawn of film, promoters needed to determine a way to get audiences to be convinced that their offering was the best way to spend their hard-earned nickel.  The methods of promoting films via two-dimensional marketing pieces, however, have changed throughout the years, moving from basic posters that emphasized the stars to custom-painted posters that attempted to sell the entirety of the film’s tone, and, more recently, to hastily put-together (often via Photoshop) works that placed the film into an easy-to-understand context of genre with the performers front and center that could be read easily in the confines of a videocassette box or, at this point, an icon on a streaming app.

This change in movie poster art sensibilities, along with the subsequent rejection of bland, nondescript art by today’s cult film fans, is chronicled in 24X36: A MOVIE ABOUT MOVIE POSTERS, a new documentary by Kevin Burke that received accolades at film festivals last year and makes its exclusive streaming debut today on Tribeca Shortlist.  It’s a fascinating story, one that manages to touch on both the history of poster art itself (and the undercredited artists behind some of the most memorable cinematic images of our time) and the issues regarding going back to a time when the poster could be part of the film’s general identity. 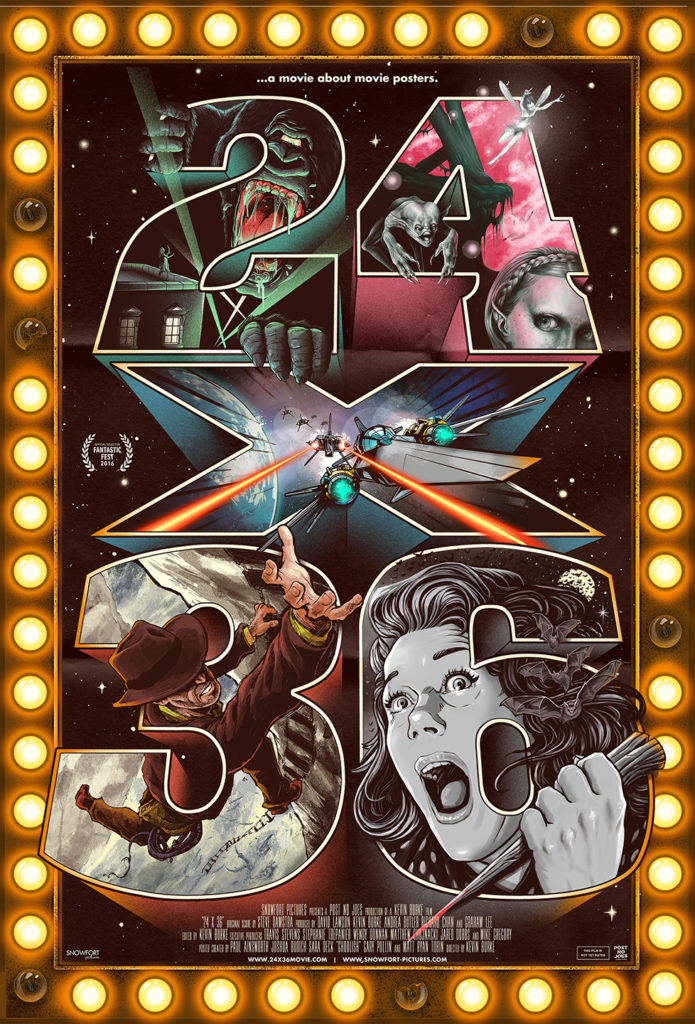 Divided into several parts, the 24×36 opens with a brief history of the movie poster and an identification of the various sizes, a handy resource for a poster neophyte like myself who hadn’t known why a “one sheet” was called as such.  With interviews with friends and fans, the film then discusses some of the unheralded masters of iconic posters, such as B-movie specialist Reynold Brown (whose work on ATTACK OF THE 50 FT. WOMAN is as much a part of the film’s notoriety as the movie itself) and studio artists like Bob Peak (APOCALYPSE NOW, MY FAIR LADY), John Alvin (BLAZING SADDLES, BLADE RUNNER) and Richard Amsel (RAIDERS OF THE LOST ARK, THE STING), with the issues they had in both the politics behind creating the posters and getting credit for them detailed.  It’s a fascinating segment, and one that could easily support a documentary on its own.

The film then details the rise of bland video cover art in the ‘90s that necessitated a much smaller space to be eye-catching to a passerby in which highly-detailed art looked far too busy on the tiny, VHS-sized canvas, effectively ending the wonderfully painted art of traditional movie posters.  (In its place, of course, we have what’s come to be known as the SCREAM effect in which several photographs of celebrity heads are awkwardly placed together, and while SCREAM takes the brunt of the credit for this, I can attest that the trend had been going on for several years beforehand.)  It’s an issue that’s continued to today, and one perpetuated by streaming platforms that, as I’ve mentioned in the past, make everything look like a stand-up comedy special.

Years later, however, the painted artwork trend rose from the ashes in the form of Austin’s Mondo Tees, who were part of a group of artists that spearheaded a revival of custom-painted artwork for vintage films that remains popular to cult film enthusiasts today.  This revival accounts for the remainder of the film, which utilizes interviews with the artists, collectors, and gallery proprietors that support the burgeoning artistic scene.  While concentrating on the art itself, the 24×36 thankfully doesn’t shy away from various controversies within the field, such as the inclination for “limited editions” that drive up the collector’s market (“day traders of pop ephemera,” as one interviewee refers to them) potentially not only being less about the art than about the money, but also creating a potential “boom and bust” situation of which any Pog or Beanie Baby collector should be familiar. 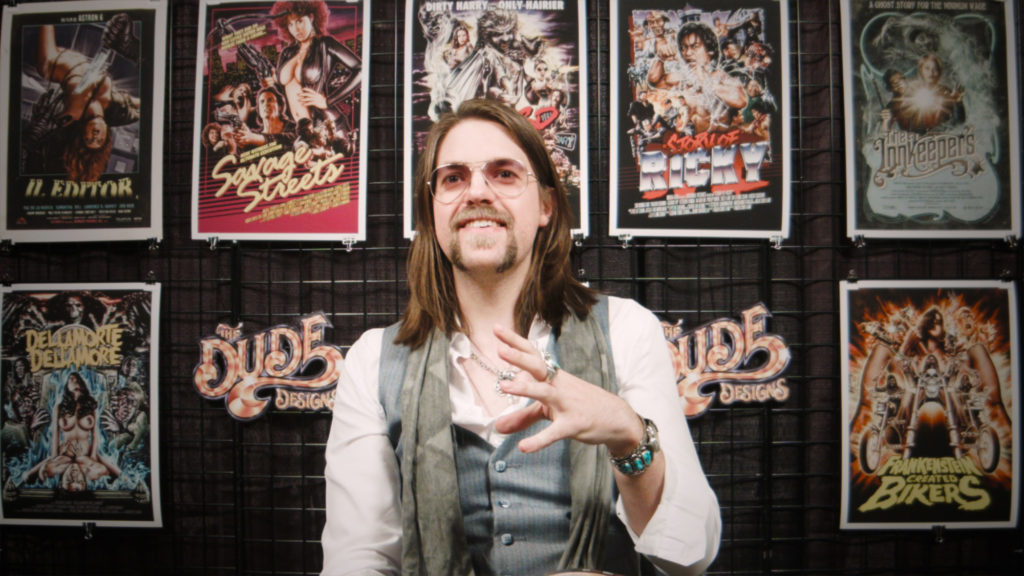 In addition, the film addresses the issue of artistic licensing, both in the sense of getting the permission of create a likeness of an iconic performer (especially the case with an conceptual ABOMINABLE DR. PHIBES poster, when the likeness to Vincent Price wasn’t available) and creating “homages” to famous films without the consent of the license holder.  (Artist Tim Doyle, who defends creating art based on other sources without permission, states that the “artist is more powerful than the license holder,” and uses The League of Extraordinary Gentlemen as an example of using creativity based on other users’ art, but neither the distinction between public domain and privately-held works nor the credit of the original artist is part of his argument.) 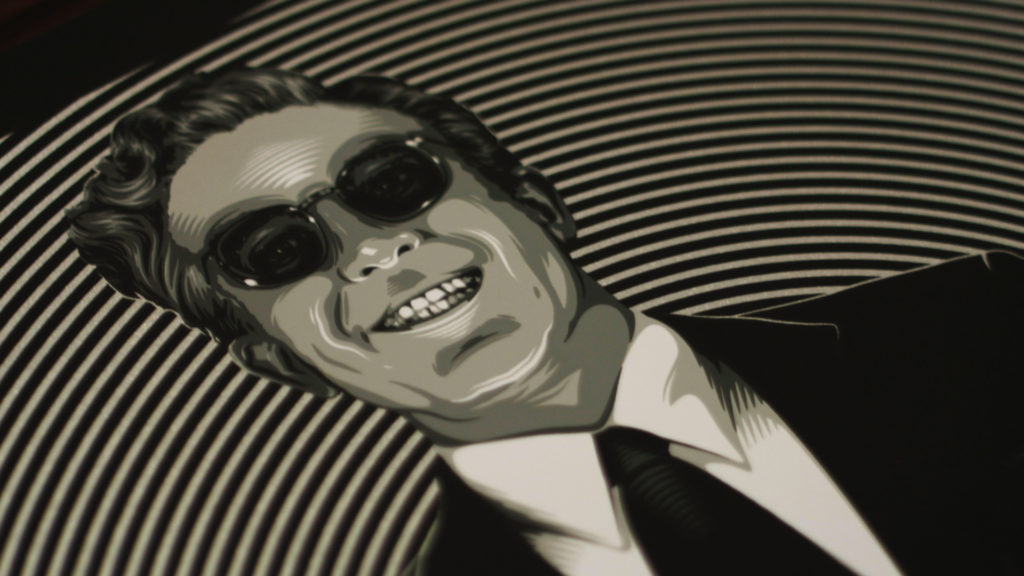 While some time is given to these controversies, 24×36 wisely finishes up by delving into the potential future of painted, intricately-designed movie posters, a prospect that seems optimistic provided that audiences can get out of their Photoshopped-head rut and embrace artwork that demands attention rather than simple acquiescence.  The space given to “poster art” (or the equivalent) on streaming platforms and DVD covers may be small, but social media allows an entirely new platform for the artwork to surface that could potentially provide more opportunities for smaller films to stand out among the many half-heads, hidden in shadows and backed by explosions that audiences have the opportunity to click on.  Eye-catching art for films like WE ARE STILL HERE, HOLIDAYS and THE LOVE WITCH have done wonders for not only selling the film accurately to an audience that will appreciate them, but also becoming part of the film’s iconography as a whole, as much as the poster art for THE GOONIES is a memorable part of the film itself, even if depicts something that never happens within it. 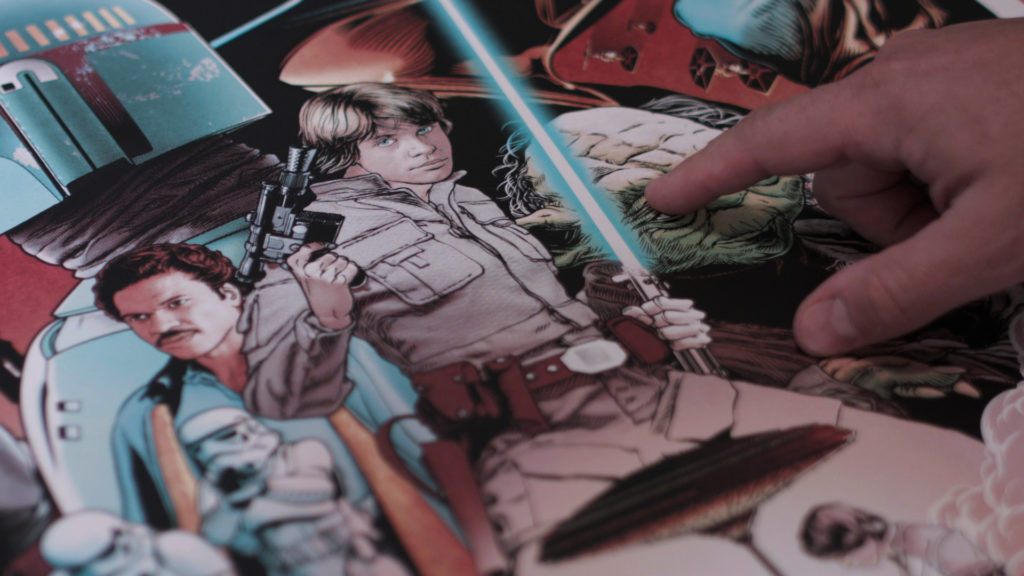 24×36 is a fascinating trek not only through the history and love of movie posters, but through the purposes that the poster serves as part of the filmgoing experience.  The posters that bring audiences into a movie have the potential to have the same longevity as the works of art that they promote, and 24×36 paints a picture of a potential world in which they can be once again.

24×36: A MOVIE ABOUT MOVIE POSTERS is now streaming exclusively on Tribeca Shortlist.