Every Thursday throughout 2014, we’ll be looking at a film from 1989 that wouldn’t otherwise get a grand 25th Anniversary Celebration.   These films may be overlooked, obscure, or downright invisible, and while only a few are undiscovered would-be classics, together they form a look at the psychotronic cinema landscape of a quarter-century ago.

Jacqueline Bisset is getting a lot of notice for her bizarre acceptance speech at this year’s Golden Globe awards for her performance in the mini-series “Dancing on the Edge,” but as an actress, she’s had an illustrious career ranging from Polanski’s CUL-DE-SAC to BULLITT to Truffault’s DAY FOR NIGHT to Terence Young’s notorious INCHON.  Few actors have as diverse a portfolio as Bisset, most likely the only performer who can say they worked with Claude Chabrol, Irwin Allen and Zalman King.  She’s doubtlessly an amazingly talented actor, a fact that tends to be overlooked in the hubbub about her, er, inventive way of accepting an award.

It’s also her performance that is at odds with the rest of SCENES FROM THE CLASS STRUGGLE IN BEVERLY HILLS, the final released* film of EATING RAOUL and DEATH RACE 2000 director Paul Bartel.  As you can probably guess from the title, the film itself, as written by Bartel and novelist/actor Bruce Wagner (The “Wild Palms” writer also appears briefly in the opening scene), is a satire on the conflict between the upper and working classes, and the satirical tone permeates through most of the film, with every performance pitched at least slightly higher than it would be for a realistic character.  Every performance, that is, except for Bisset’s. 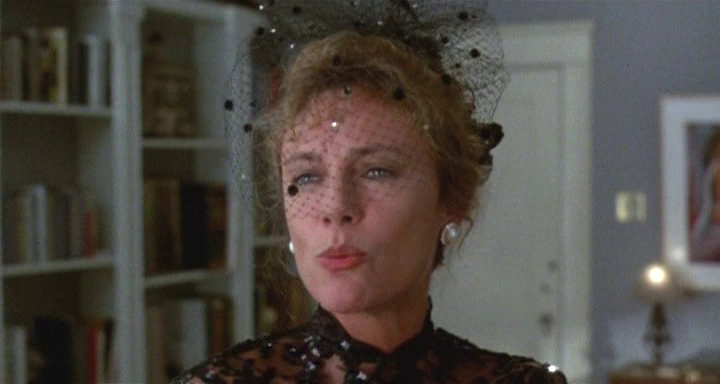 It’s not that Bisset is incapable of capturing the correct vibe.  The opening sequence of CLASS STRUGGLE is fantastic, a dream of Juan’s (EATING RAOUL’s Robert Beltran), the houseman for the wealthy actress Claire (Bisset) whose husband has recently died of auto-erotic asphyxiation.  A dinner party featuring the deceased hubby at the table that escalates into Claire throwing boiling water at cook Rosa (Edith Diaz), then transforms into a seduction scene, the opening of CLASS STRUGGLE is played to over-the-top perfection by everyone involved, with the pitch rising like the most ridiculous opera ever.  “I should write for ‘Dynasty,’” Juan comments upon waking, and it’s hard to disagree.

The plot to CLASS STRUGGLE concerns a weekend at Claire’s home, on the occasion of her husband’s funeral.  Her best friend Lisabeth (Mary Woronov, nominated for an Independent Spirit Award for the role) and her sickly son Willie (NEVERENDING STORY’s Barret Oliver in his final film before he left acting) have moved in temporarily due to their home being fumigated, and Lisabeth has brought along her playwright brother Peter (Ed Begley Jr.) and his new bride To-Bel (Arnetia Walker), married after a 5-day courtship.  Also on hand is Claire’s daughter Zandra (“My Sister Sam”’s Rebecca Schaeffer, who was murdered before the film was released) and her “thinologist” Dr. Mo Van De Kamp (Bartel), not to mention the ghost of Claire’s dead hubby (Paul Mazursky), the servants, a dog, and even Lisabeth’s slimy ex-husband Howard (Wallace Shawn) who’s come to make amends. 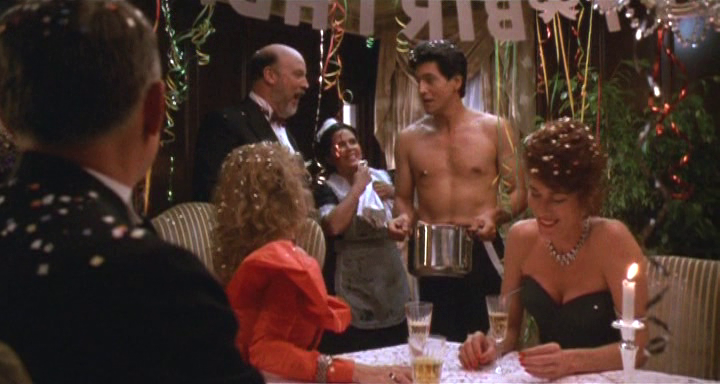 It’s a perfect set-up for a ridiculous sex farce, and Bartel and Wagner deliver in spades, pitting the characters against each other with such a frenetic variety of combinations the mind has trouble keeping it all clear.  The central plot involves the two ladies’ manservants Juan and Frank (Ray Sharkey) making a bet to seduce each other’s employers by the weekend’s end, with Juan being rewarded with enough to pay off his gambling debts if he wins, and the bisexual Frank being allowed to get to know Juan a bit more intimately if he does.  Meanwhile, Claire and Lisabeth discuss their non-existent sex lives and consider the servants as a possible option.

The “central plot,” however, falls by the wayside pretty quickly.  Sure, we keep going back to the differences between Juan’s sincere attempts to seduce his friend’s employer and Frank’s more aggressive techniques that seem to come from the “rough trade” textbook, but pretty much every character has at least a couple sub-plots to glom on to.  Secrets are revealed, pretty much everyone manages to have sex with someone, climaxing with an all-out brawl at a pleasant dinner party meant as the beginning of a revival for Claire’s acting career. 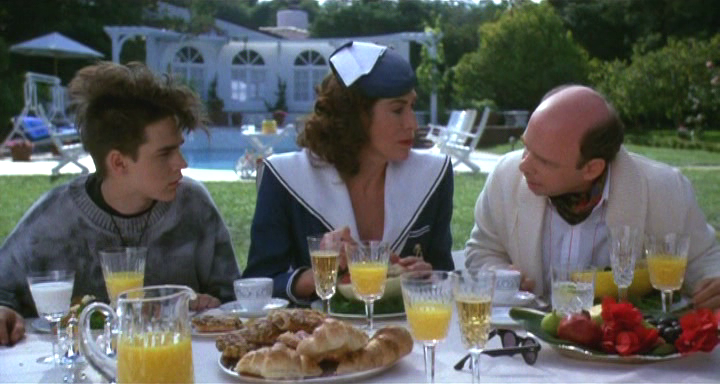 Bartel again takes aim at absurd social mores and pokes plenty of fun at the wealthy elite.  When one character mentions that they’re going to Africa, they quickly amend, “the GOOD Africa.”  What’s their purpose there?  Ostensibly a medical research mission, the important this is “the joy of knowing that we’ve sacrificed selflessly.”  Howard instructs his manservant, “Send me a new car, I don’t remember where I left the last one.”  In a great sequence, discussions between the two matriarchs and the two servants are intercut with both talking about how sexual the other half is.  It’s decadent, high-class bitchery served with a martini in hand.

A solid farce often has an insanely unpredictable character, and CLASS STRUGGLE has that in the cook, Rosa.  Her gleeful madness leaks out into the film slowly, as she mentions that a deceased pooch is now pooping diamonds, and that in the afterlife, he’s fighting ”the jaguar, the monkey, and the evil Jesus.”  Edith Diaz makes the character work beautifully, so much that you even buy the unlikely turns her journey takes.

And then there’s Claire.  The problem is that CLASS STRUGGLE is played at just a high enough pitch to not take seriously, and Bisset’s Claire is, save for a few lines of dialogue, a fairly down-to-Earth character that doesn’t quite mix in with the rest of it.  Beltran’s Juan is just as human, but he’s such a mess that he meshes with the surrounding chaos, and Claire never quite clicks with anything else on screen.  She’s a real character in the midst of a farce, and as good of an actress as Bisset is, it never quite all comes together. 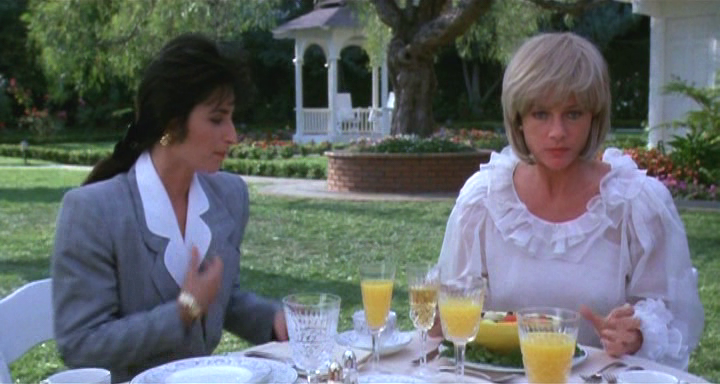 Despite the occasionally uneven nature, however, CLASS STRUGGLE is a hell of a lot of fun.  While Bartel is clearly playing with the same satirical bite of EATING RAOUL and DEATH RACE, the jabs in CLASS STRUGGLE are more light-hearted and flippant, and it never feels like the film is trying to be “outrageous” as much as it is just having a bawdy good time.  CLASS STRUGGLE seems ribald and often surprising, but it rarely plays to the grotesque gallows humor of EATING RAOUL. To the film’s credit, the film never judges its characters for any kind of sexual “immorality,” but only for their arrogance or lack of respect, and even then, it’s not a story of “good guys and bad guys” so much as “a bunch of varyingly self-centered people doing self-centered things.”

1989 was the tipping point for “Beverly Hills” fatigue, as the same year begat Shelley Long’s TROOP BEVERLY HILLS, the Peter Billingsley vehicle BEVERLY HILLS BRATS, Fred Olen Ray’s BEVERLY HILLS VAMP, Vic Tayback in BEVERLY HILLS BODYSNATCHERS and Frank Stallone in TERROR IN BEVERLY HILLS (not to mention BEVERLY HILLS CORPSE, the working title for David DeCoteau’s MURDER WEAPON), so it’s likely that CLASS STRUGGLE, a genuinely smart film, was lost in the shuffle.  Making things no doubt worse were the fact that it was released that summer in a season that included BATMAN and GHOSTBUSTERS II. 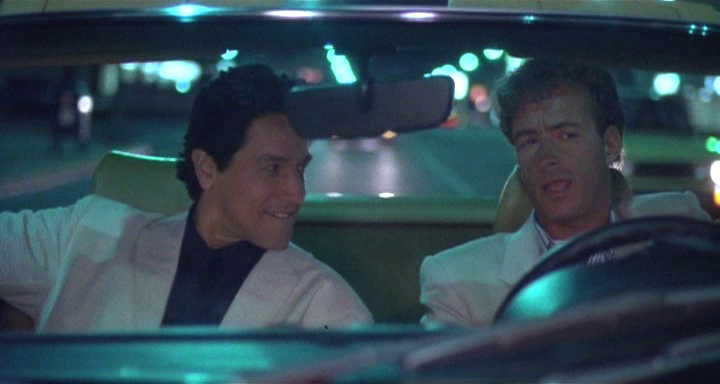 Reviews were unexceptional.  Roger Ebert seemed to think that Bartel intended the film to be shocking and dismissed it with two stars.  Vincent Canby was more appreciative, alluding to it being “small and irresistible,” and it’s hard to disagree.

The film garnered some recognition on video and was promoted as an art-house sex comedy when it appeared in Cinemax the following year, but it’s never quite gained the following of other Bartel films like DEATH RACE 2000, PRIVATE PARTS or EATING RAOUL, and the fact that it’s never been issued on DVD in the United States doesn’t help.   (It has been released in Germany and Italy, neither with much in the area of extras, but at least it’s letterboxed.) 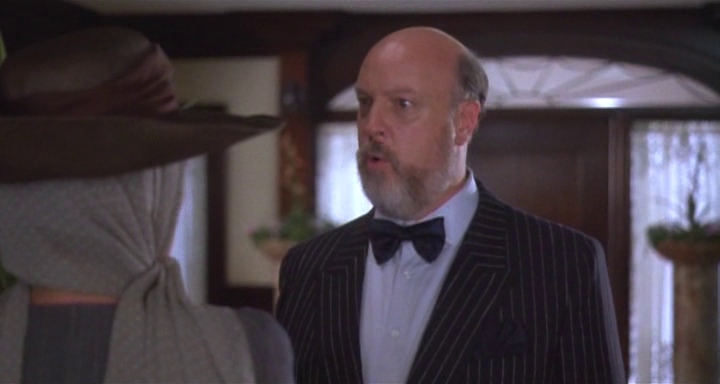 SCENES FROM THE CLASS STRUGGLE IN BEVERLY HILLS won’t hit the cult film nerves to the extent that DEATH RACE 2000 or EATING RAOUL does, but it’s still a witty, well-paced, and highly entertaining flick with loads of great actors getting a chance to spew dialogue like “There’s a lot of money in hunger.”  Can you really hate a movie where Ray Sharkey talks about being able to come by looking at certain types of ferns or Wallace Shawn refers to his testicles as “a set of fat, petty dictators sewn up in cheap leather?”  I’d think not.

* – Bartel’s final film, SHELF LIFE, continues to live up to its name by sitting in legal limbo.  Someone release this, please!  Anyone? 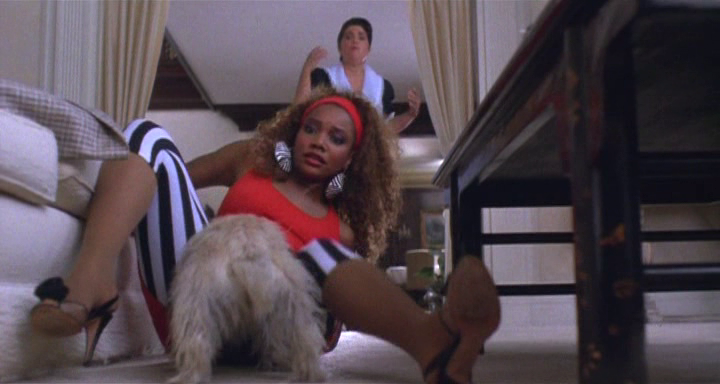