The “grand dame” horror films of the ‘60s and ‘70s, in which middle-aged (or older) actresses took great efforts in chomping on as much scenery as their stomachs could handle, had fallen out of fashion by 1983, when CURTAINS finally hit the screen (briefly) and video store shelves (eternally). It’s not surprising, then, that the film ended up being marketed with misleading box art, suggesting that it had something to do with a killer doll, a suggestion that most likely disappointed those looking for typically early ‘80s slasher fare.

While CURTAINS certainly has its share of slasher film tropes, it’s a much more adult film than the horror pics of the era that featured a potpourri of college or high school students getting bumped off one by one. CURTAINS, however, features full-grown adults in peril in a gothic scenario that comes off as more Agatha Christie with a SHOCK CORRIDOR vibe than anything involving summer camps and local legends. This isn’t to say that CURTAINS isn’t a mess — it’s a bizarre cavalcade of plotlines and ideas that don’t really hold together, though that doesn’t make it any less fascinating.

The film opens with actress Samantha Sherwood (Samantha Eggar) auditioning for a role as a madwoman for her frequent collaborator, director Jonathan Stryker (John Vernon). Stryker finds her performance unconvincing, so she agrees to be placed in an asylum for the mentally insane in order to prove her abilities. When it becomes apparent that Stryker plans to keep her there and begins casting the part on his own, Sherwood breaks out and makes her way to Stryker’s remote mansion during a weekend when he’s invited a half-dozen actresses to audition for the role.

The actresses are a motley crew of ladies, including stand-up comedienne Patti (Lynne Griffin), ice skater Christie (Lesleh Donaldson) and experienced actress Brooke (Former “Avenger” Linda Thorson), who don’t exactly get along royally, especially after Sherwood’s arrival, which Stryker doesn’t seem to balk at. Eventually, the potential cast list grows smaller as the ladies start getting picked off by an assassin in a creepy mask that resembles a melted, ancient Julianne Moore.

The film itself doesn’t really have much of a consistent tone, wavering between a classy piece of gothic horror during some scenes and a relatively generic (if well-lensed) slasher film during some of the murder sequences. Eggar and the rest of the ladies are in fine form, with Griffin’s Patti standing out as a genuinely interesting, charismatic character, and an early sequence with all of the potential actresses gathered around a table talking ranks as one of the best introductory interactions between characters of the films of the time, but it doesn’t make a whole lot of sense, one character simply vanishes only to show up dead randomly later, and the mask treads a line between frightening and silly that bounces into both arenas often in the same scene. 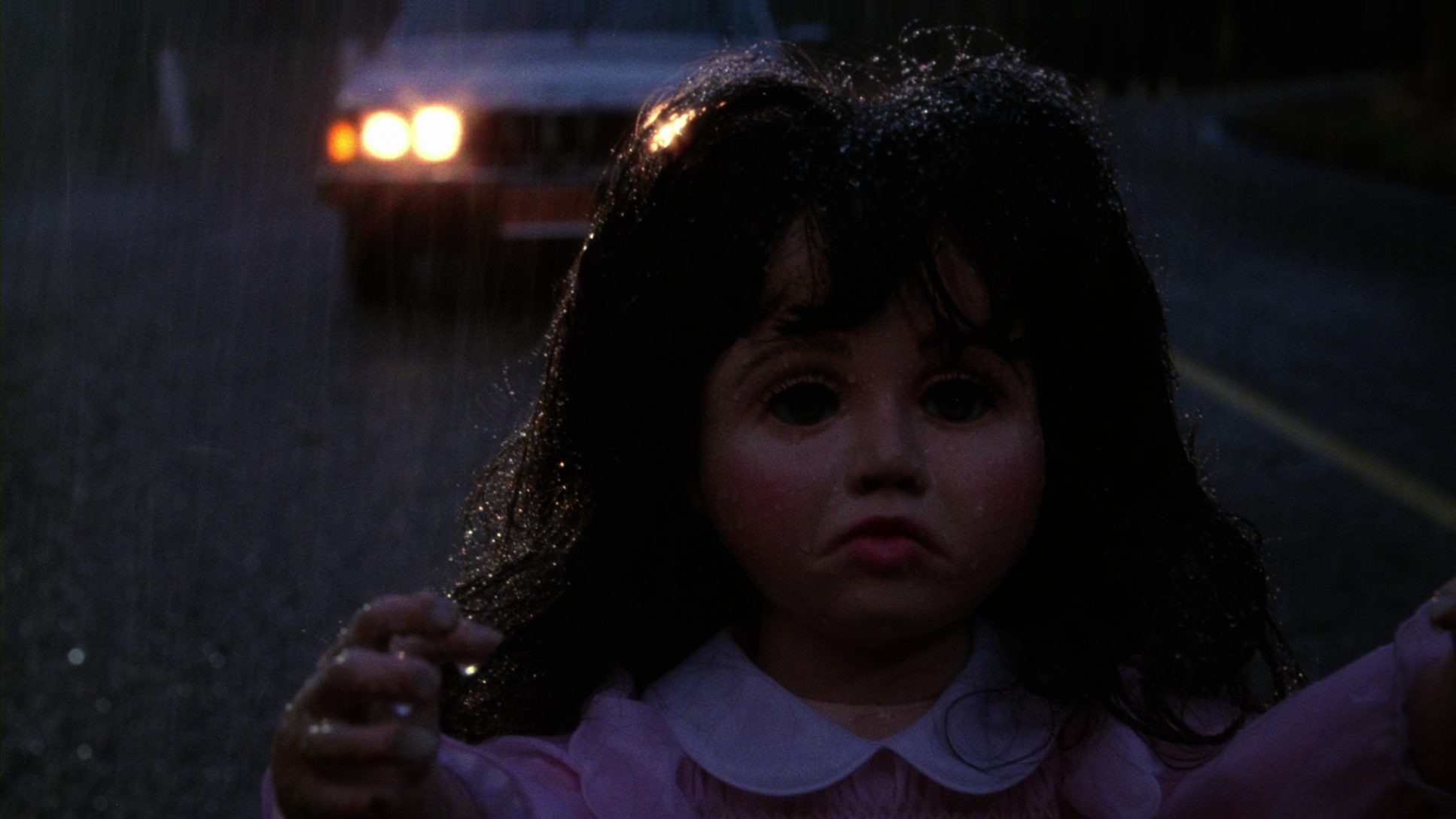 However, CURTAINS has some amazing moments even it doesn’t add up to much, and there is a reason that scenes like a murder on ice have become more iconic than the film itself. For the most part, it looks great as well, with Robert Paynter’s cinematography beautifully framing some genuinely unsettling sequences.

That great look is a benefit of Synapse’s new Blu-ray, which uses a new 2K HD transfer from original materials that make this look like a completely different film from the VHS that languished on video store shelves for decades and the one that populates the occasional multi-film DVS pack. But the upscaled video is, by far, not the only reason that the CURTAINS Blu-ray is worth picking up.

Synapse’s Blu-ray (it’s also on DVD, but LIVE IN THE NOW, MAN!) is the perfect example of what makes the format so great and so continuingly necessary for collectors even in the age of streaming media. More than the mess of a film, the Blu-ray’s special features give the audience insight into why the film feels so off. “The Ultimate Nightmare: The Making of Curtains” is a retrospective documentary featuring director Richard Ciupka, actresses Donaldson and Griffin, editor Michael MacLaverty, effects artist Greg Cannom and composer Paul Zaza, and everyone interviewed is wonderfully candid, very open to speaking about the behind-the-scenes issues the film had and, most prominently, the conflicts between the visions of director Ciupka and producer Peter R. Simpson, one that ended with Simpson shooting additional footage and re-editing the film and causing Ciupka to take his name off of the project and substituting the name Vernon’s character in the film! 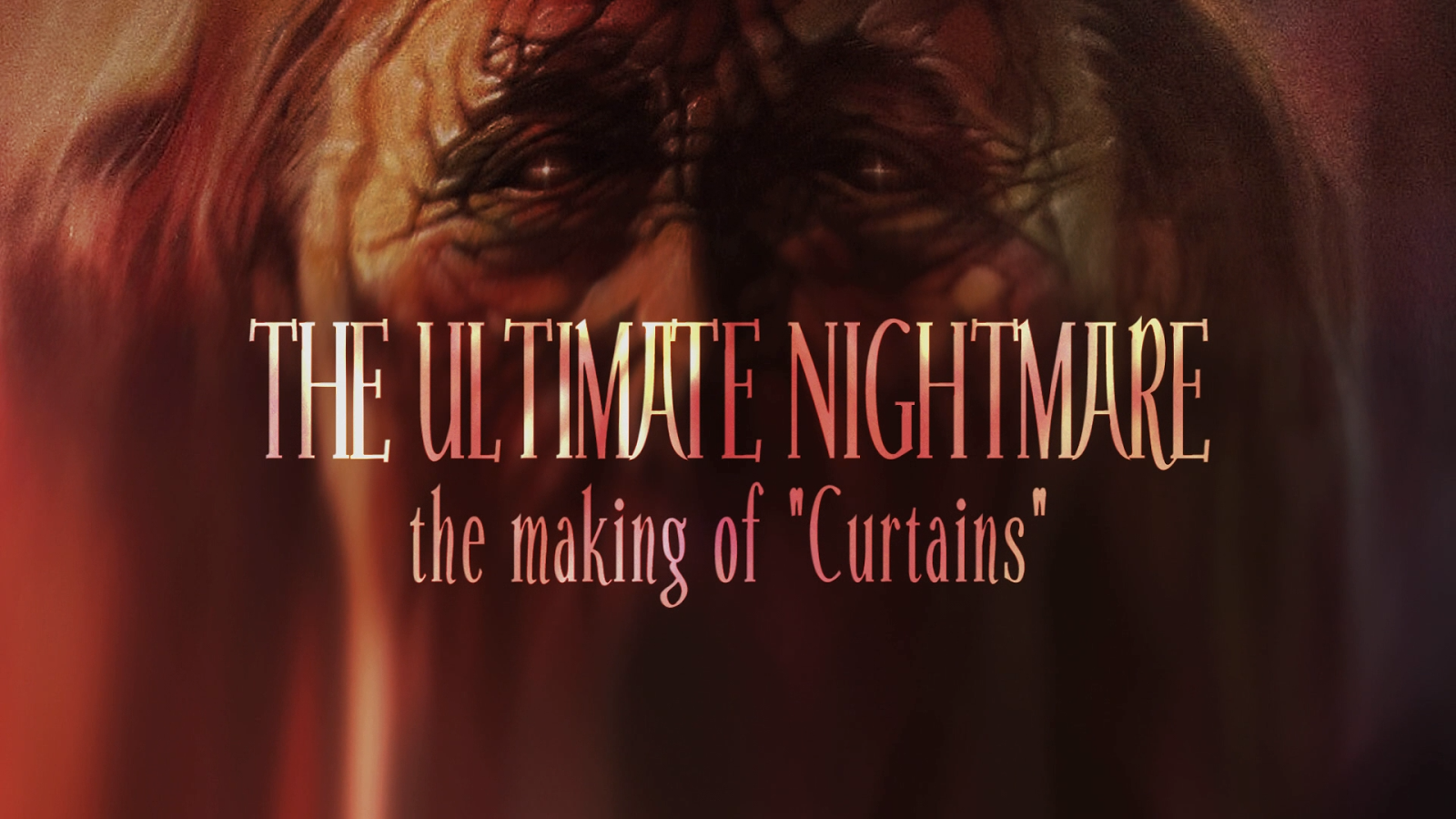 The disc also features two commentary tracks, the first, a highly entertaining track featuring Donaldson and Griffin watching the film together and gleefully gossiping about its production. (Griffin gets a pleasant surprise when she sees one of the side characters that I won’t spoil here.) A second track includes vintage interviews with producer Simpson, who is just as candid with talking about the behind-the-scenes conflicts and serves as a fine counter to Ciupka’s claims (I’m not sure when this was conducted, but as Bob Clark is mentioned as being alive, it would be before 2007) and Eggar, who talks briefly about the film and her career, mentioning that she’s not a big fan of horror films.

If that’s not enough, the Blu-ray also includes “Ciupka: A Film-maker in Transition,” a 15 minute documentary on the director shot at the time CURTAINS was being filmed and giving a fascinating look at the Canadian filmmaking scene and the shooting of the film’s dinner table sequence. Synapse’s Blu-ray is more than just a great presentation of the film – it’s a full examination of how the film came to be, and one made even more interesting by the fact that CURTAINS is such a strange mesh of ideas and intention. If CURTAINS is a Frankenstein’s Monster of a movie, Synapse’s Blu-ray is FRANKENSTEIN, the film, detailing in captivating detail how the monster came to be, and everyone involved deserves a round of applause for putting together such a great package for such a genuinely odd little flick.