John Carpenter grew up watching Westerns. One of his very first short films, THE RESURRECTION OF BILLY BRONCO, was inspired by them. And although known as a horror director, he’s really been making Westerns since the very beginning: ASSAULT ON PRECINCT 13, THEY LIVE, ESCAPE FROM NEW YORK/L.A., GHOSTS OF MARS and there are even more. But when it comes to the weary and embattled few taking on many in the dusty, sandy landscapes of the Midwest, complemented by the appropriate acoustic-guitar-driven musical score, it’s VAMPIRES that claims the top spot as the western Carpenter always wanted to make. Sure, the enemy might be sunlight-avoiding bloodsuckers, but they spring up from everywhere – from behind buildings, or elevator shafts – and it’s up to Woods’ Malcolm Crow and his desperadoes to mow them down with a glorious collection of weaponry. The only thing scarier than facing your certain death in the OK Corral at sundown is being out there in the New Mexico desert at all once the sun begins to set, allowing the legion of vampires beneath the sandy surface to rise, looking for necks to suck on. 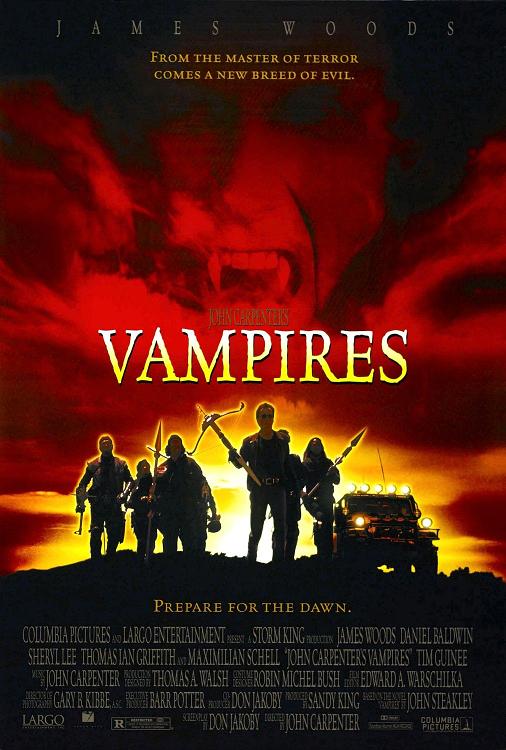 VAMPIRES is a hell of a lot of fun – the type of fun of which only Carpenter is capable – the type of fun that is completely without pretension, and which only wants to entertain, emboldened by that “to hell with mainstream audiences” mentality that Carpenter has been rocking since THE FOG. It’s never spoken of fondly among cinephiles, but for the ardent Carpenter fan, it’s generally regarded as the last great feature from the filmmaker. It opened # 1 at the box office its debut weekend and enjoyed a laudable collection of favorable reviews – again, and sadly, it may be the last time of Carpenter’s career. To follow would be the box-office and critical bomb GHOSTS OF MARS, followed by the little-seen THE WARD, and then endless speculation of just what projects Carpenter might tackle next, should the necessary funding come together (which seems more and more like a red herring as time goes on).

Carpenter films contain a certain energy and swagger that’s not commonly seen in other films of the genre. There’s something about the way he crafts the story and develops the lead that feels different – that establish their own identity. His siege-like tales always center around that one strong lead fighting back against adversity; heroes either anti or reluctant leading a small squad of people against the threat coming down hard upon them; heroes taking on the establishment with little hope for success.

Malcolm Crow is among them, and he is brought to boisterous, cigar-chomping, scenery-chewing life by James Woods, not only enjoying a rare lead performance, but enjoying one in which he gets to play the hero. And man is he shooting for the rafters. Woods’ performance exudes a kind of energy rarely seen in a genre project within the confines of a major studio release. (Watching him stake vampires while screaming, “Motherfucker, die! Die!” over and over is the stuff of dreams.) This wasn’t just a relatively unknown Kurt Russell taking on Snake Plissken, free of the constraints of having achieved mainstream success and straddling that line between risk-taking and reputation-maintaining. This was James Woods, a twice Oscar-nominated actor (the second nomination having been the year prior for GHOSTS OF MISSISSIPPI); who had, in the few years leading up to VAMPIRES‘ release, worked with Martin Scorsese, Oliver Stone, and Robert Zemeckis; who, in the following year, would work with Clint Eastwood. Not to belabor the point, but this was an actor who had a lot to lose, creatively, by taking on a project of such potential embarrassment. But he threw caution to the wind, likely so he could let back his proverbial hair and just have fun.

And man, that’s what VAMPIRES is. It’s fun. 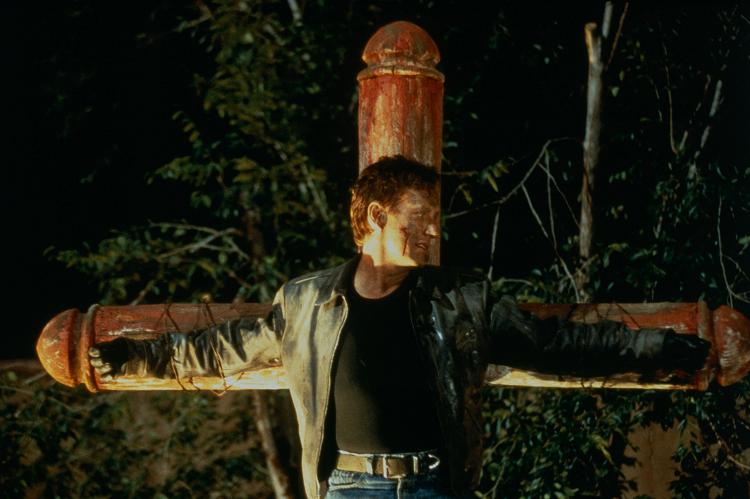 As for the supporting cast, Daniel Baldwin (the most underrated Baldwin, for serious) as Montoya doesn’t get enough credit for his abilities as an actor. His contributions to the film are to offer a believable and somewhat restrained counterpart to Crow’s eccentric and bigger-than-life persona. That he begins to slowly fall for Katrina (Sheryl Lee), a prostitute bitten by the film’s main baddie, only adds to his likability. He’s written as the loyal and dependable partner – the ideal person to have in your corner when you’re up against it – and you completely buy the rapport he shares with his fellow vamp-killer. Thomas Ian Griffith also does a fine job retreading very old and established ground with his take on Valek, likely the fifth hundred vampire to hit the screen since the film medium began. With one foot each in the sexual-being and the monstrous-killer camps, his Valek is an interesting addition to the vampire sub-genre, which, by now, is in desperate need of rejuvenation following too many years of so many pretty bloodsucking boys. (Also look for brief appearances by Mark Boone Junior of SONS OF ANARCHY and Cary-Hiroyuki Tagawa, a.k.a. Shang Tsung of MORTAL KOMBAT.) 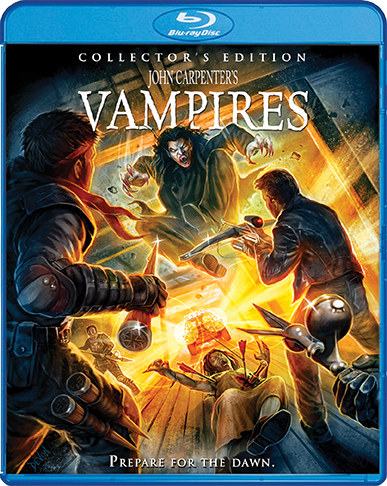 After Twilight Time’s previous go-round with VAMPIRES, Scream Factory resurrects the title with the same transfer and audio. Detail is very fine, flesh tones look realistic even beneath the blanket of red haze, and the sparseness of the desert looks quite beautiful. And the blood! Oh mother, the blood! Carpenter’s grungy acoustic score, indicative of the very western genre he’s exploring, sounds fantastic, along with the litany of dynamic sound designs  and creepy ambiance. Scenery-chewing dialogue is crisp and clear. Splashing blood and flying limbs sounds appropriately icky. The finale sounds especially good, what with all the gunfire, sizzling vamp, and classic Carpenter music. (Fun fact: Noted guitarist Steve Cropper and bassist Donald “Duck” Dunn, famously of THE BLUES BROTHERS, contributed to the musical score.)

A fair helping of actors, and the film’s creative team, are on hand, for interviews. Oddly, Carpenter, Sandy King Carpenter, and D.P. Gary Kibbe were combined into their own “making of” that only runs about twelve minutes. However, the interviews with all the actors run from 12-20 minutes, with James Woods getting the longest interview segment. It’s really warming to see Woods still fondly recalling VAMPIRES over twenty years later, and it’s also refreshing to see him admit that, yeah, he can be kind of a pain in the ass to work with. Woods has become more infamous over the years for his extreme views via his Twitter account, and while that particular Woods isn’t reflected during his interview, he’s still sure to subtly voice his disdain for the current outage society and the push for more prominent roles for women along with their treatment on screen. Or perhaps I’m just reading into things a bit too much. Really, all the actor interview segments were great, with Tim Guinee recalling a hilarious anecdote in which he told a speeding motorist to go fuck himself…forgetting he was wearing his priest costume during a lunch break. Thomas Ian Griffith also appears, entirely unrecognizable with his snow white hair and nowhere near his giant Valek wig, and he seems to be the nicest man on earth. (Audio levels are a little off during all the interview segments, sadly, as clips from the movie play much louder than the interview portions.)

As for the recycled content, the standout is the commentary rack by a solo Carpenter, and the best line  comes when he’s observing his use of a fake scare that punctuates a sequence concerning a group of vampire hunters opening a suspicious closet door: “Really cheap, isn’t it? Throw the dummy out of the closet.” He provides a lot of good background on the project, on the script, on working with James Woods and Daniel Baldwin. Even a lesser Carpenter commentary is still far more entertaining than your usual. 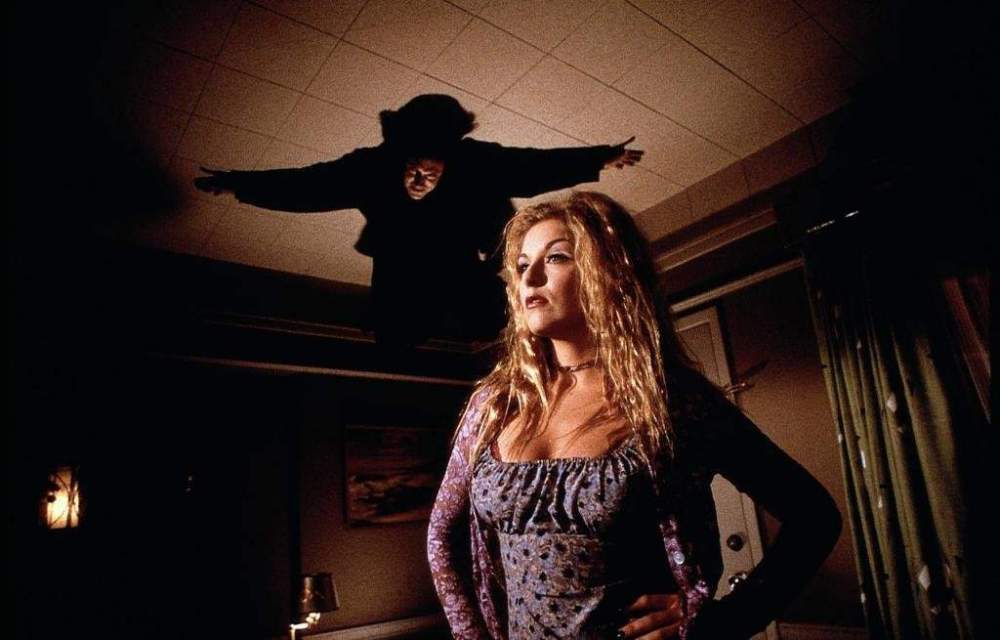 Solid PQ and AQ and a nice collection of new (and recycled) special features makes VAMPIRES a worthy addition to the high-def Carpenter catalog. This Blu-Ray release from Shout Factory offers you the perfect excuse to revisit a film, made by one of the all-time greats, that for whatever reason you may have dismissed after a one-time viewing. A manic performance from James Woods, a healthy dose of violence and blood-covered grue, and a full-on embrace of western aesthetics makes VAMPIRES an underrated addition to Carpenter’s filmography and one of the more unique contributions to the vampire genre.