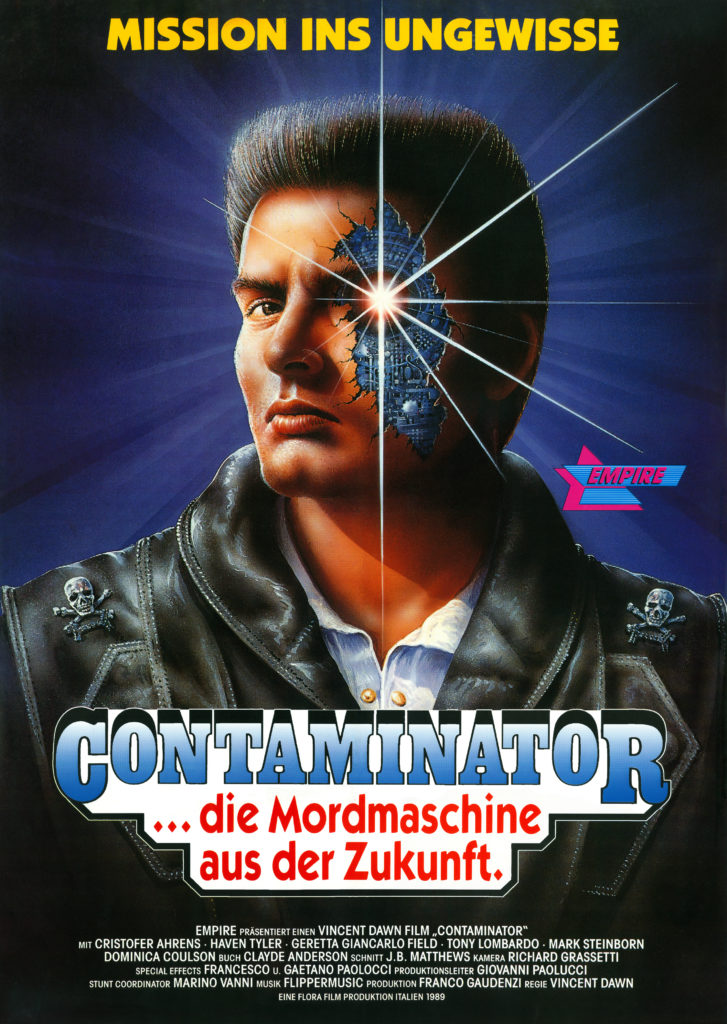 There was a glut of Italian knockoffs that permeated the film market in the 1970s and the 1980s. You had Lucio Fulci attempting to ape the zombie carnage of DAWN OF THE DEAD with the unofficial sequel ZOMBIE (it was called ZOMBI 2 overseas when it was released in 1979). Take for example, the drive-in double feature efforts that Luigi Cozzi unspooled upon us in 1978 with Starcrash, a clear appropriation of STAR WARS and then in 1980 releasing famed Video Nasty CONTAMINATION as an attempt to cash-in on the ALIEN craze that Ridley Scott created a mere year earlier. These films, as clear as their homages are, try to do something different than the films they were influenced by though. ZOMBIE is a clear classic on its own, and is far more memorable than the other examples I’ve given you today – by putting the zombies back on an island where the mythos of the undead was created, it harkens back to the older-fashioned concept of the zombie, but updates it with in-your-face gore and Fulci’s madcap direction, and it gave the film its own legend. I suppose the less said about STARCRASH and CONTAMINATION the better, but Mystery Science Theater 3000 effectively handled the film on its own accord, and I’ll say the only thing CONTAMINATION seemed to derive from the ALIEN films is that people love watching chests ‘asplode. 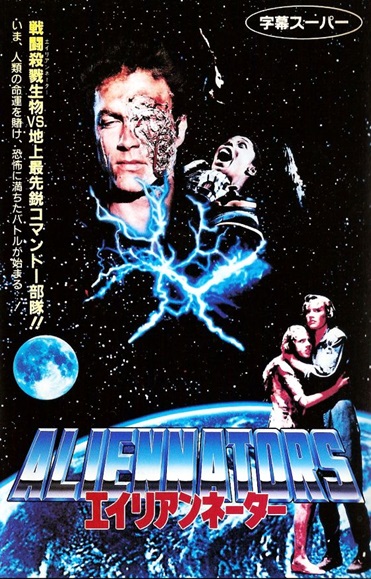 SHOCKING DARK (out from Severin Films on May 29th) was released in 1989 and has several alternate titles associated with it such as TERMINATOR 2, ALIENS 2, and ALIENATORS. Those similar titles to the product it’s emulating is a clear neon sign that this is such a carbon copy of ALIENS — nay outright theft — that if James Cameron cared (or presumably knew of the film) to sue the filmmakers, he could nuke it from orbit and destroy every copy in existence. Every single great beat from ALIENS (and THE TERMINATOR) is redone without any sense of grace or emotion or direction that Cameron employed that made his works the classics they are today. The end result feels like a community-theater version of ALIENS that would’ve ended up doing a one-weekend run in a black box theater. 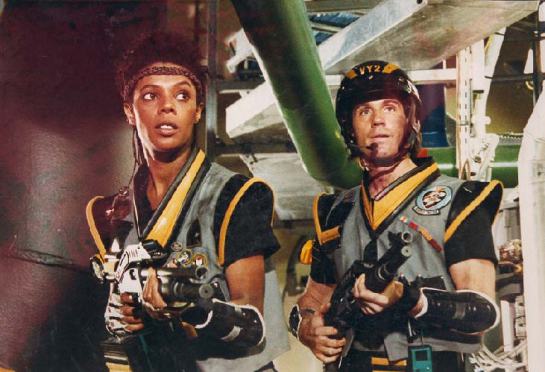 Where do I start? There’s a tough female (this time a doctor) sent alongside soldiers to rescue a scientist in his laboratory. Along the way, as these soldiers and civilian prowl through steam-laden corridors, they encounter a small British child who has ties to the scientist they’re trying to rescue. There’s a sinister corporation (called the Tubular Corporation, hilariously) ala Weyland Yutani and a Burke-esque character (also hilariously named Samuel Fuller) sent with the soldiers who SPOILERS, ends up being an android. There’s a scene where the soldiers are boxed in and are tracking the monsters’ movements on a handheld device. And most egregiously, the scene where Ripley and Newt are trapped with a face-hugger is ripped off when the lead female, Sara and the young girl Samantha are locked in a room with the creatures. Hell, the Burke expy even turns off the security camera so no one will see what’s happening! I also sensed hints of James Horner’s score in SHOCKING DARK’s score by Carlo Maria Cordio. It’s in the third act when the film starts to shift into a TERMINATOR rip-off when Fuller’s intentions are revealed. This is where I can see a gem of an idea in that SHOCKING DARK feels like Cameron’s original TERMINATOR – a grimy, grindhouse sci-fi horror film. Admittedly, the film feels like something that Cameron would have worked on for Roger Corman back in the early 1980s, so the end result of SHOCKING DARK feels like some sort of HUMAN CENTIPEDE-esque approach to recycled filmmaking, in that you’re not getting the original meal that was consumed, but rather the leftovers. It also wouldn’t be the last time Bruno Mattei ripped-off ALIENS, he did so with his last film, ZOMBIES: THE BEGINNING – which is a film that notoriously ripped off the artwork for CITY OF THE LIVING DEAD’s poster, a feat he pulled (sort of) with HELL OF THE LIVING DEAD. 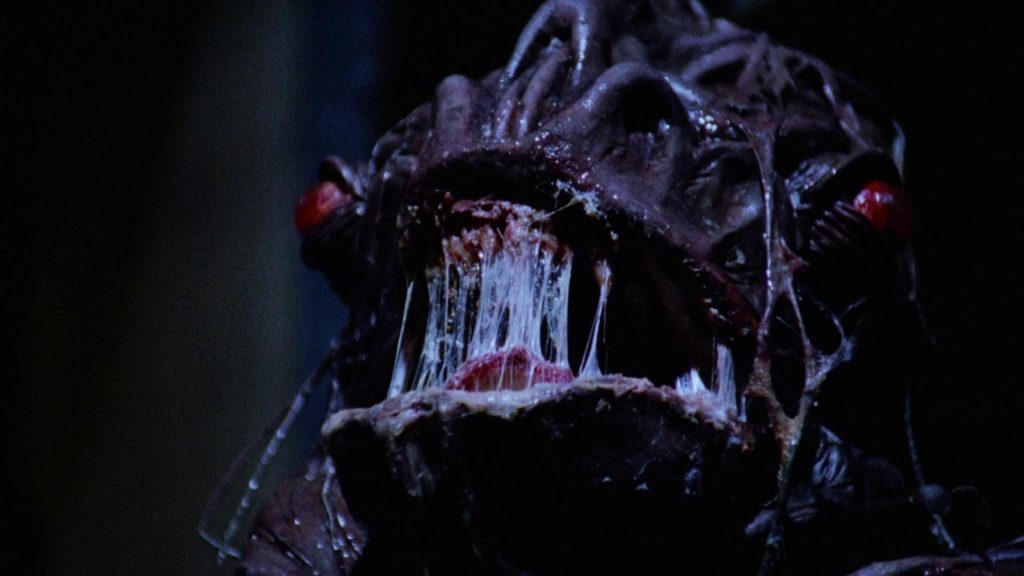 The writer, Claudio Fragrasso, shadowed by the pen name Clayde Anderson (what the fuck), keeps things moving fast, the carnage starts up under the twenty minute mark and never lets up and since the characters keep moving from location to location, you’re never bored by the scenery. The dialogue could come out as marble mouthed and over-the–top when you’ve got choice snippets like, ”Well, he just condemned himself and his family to certain death!” is uttered breathlessly. The plot, per usual for Italian- and low-budget schlock is incomprehensible, but you don’t get your ticket punched for fun trash like this and expect political allegory all the time, right? What you come for is the monster carnage! And there’s a great deal of it here, with monsters being shot with shotguns and machine guns alike, blowing up into squishy bits. Oddly enough, the filmmakers turn away from their genre forebears in making this film anemic as hell. There’s no bloodletting! The monsters either attack and kill off-screen, or toss the soldiers off of railings to the floor below. Over-the top gore could’ve given the film something memorable to distinguish it from the carbon copy of ALIENS that it is. 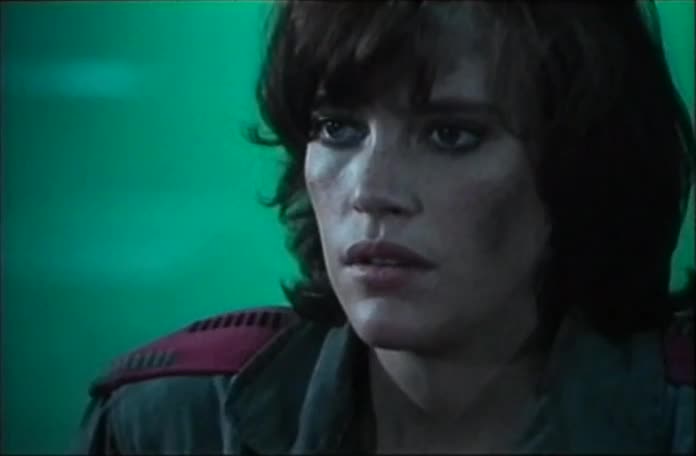 Bruno Mattei, cowering behind the Vincent Dawn pseudonym, directs the action scenes well and shoots the monster stalking scenes with minimal suspense. But the problem is, the schlockmeister has a problem directing actors to give anything in the neighborhood of a normal performance. The majority of actors in this film give performances ranging from megaphone mouthed yelling to fits of Daffy-Duck-like epileptic fits. Clive Riche’s performance as Drake is one for the books in overcooked, overacted characters in the film. With the level of acting prowess involved, I’d be likelier to say it’s closer to a porno version of that community-theater performance of ALIENS. I will admit that the actress who plays Dr. Sarah looks so much like Kate McKinnon that it became a massive distraction. Geretta Geretta turns in a reliably confident performance as Koster. Her introduction in the film is as memorable as one would want, even if it’s again, a rip-off of the Marines gearing-up scene (featuring a guy preparing for battle by using his nunchucks, I guess …). She’s clearly meant to be the Private Vasquez at the Mega Force team, short hair and ball-busting attitude (and gets off some unfortunate racial slurs at the Italian soldier in the group). You would expect her character to have a pretty big arc, especially since her character Vasquez was treated with a hero’s death, but blink and you miss it — she’s unceremoniously killed off halfway through the second act. 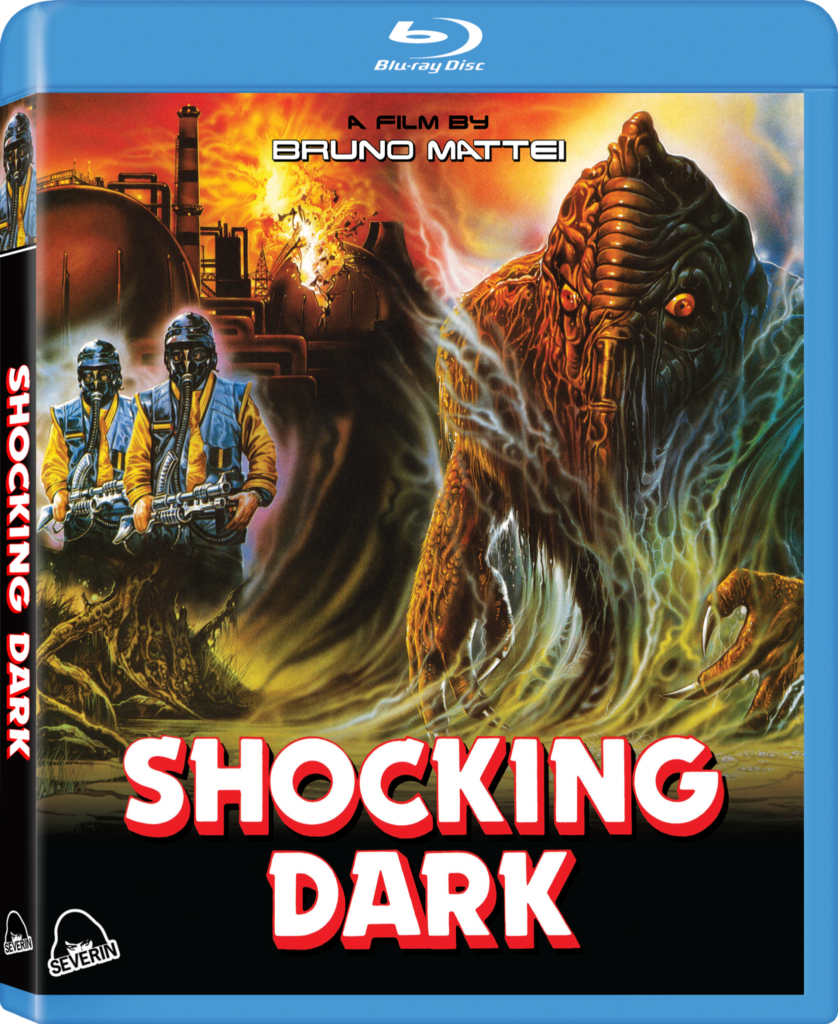 The Blu-ray has been given a gorgeous treatment by Severin. Sure, there are some pops in the picture (which personally, lends itself in creating the low-budget cheapie vibe the film gives off), but it’s not visible to the naked eye and with a picture as pristine as you get with this Blu-ray, you won’t find yourself complaining. It also serves to give the locations a sharp and shiny sheen. Frankly, it’s beautiful. Look, I know I’ve spent these past few paragraphs telling you about how SHOCKING DARK is a low-budget rip-off of ALIENS, but this ultimately doesn’t detract from how enjoyable the film truly is. There’s a sense of “let’s put on a show,” that permeates throughout the entire production. The plot may be lacking, yes, but the concept is cool – a futuristic Venice, polluted by a toxic cloud and underground tunnels filled with monster and their victims. Sure, the execution is a little lacking, but what the hell? It’s a spirited film that feels in line with the DTV junk I grew up on in the 1980s and 1990s, like XTRO 2 or THE TERROR WITHIN. This is a midnight movie where you drink a shitload of beers, toke your finest herbs and yell at the screen with your friends. At the very least, it’ll be right at home on Mystery Science Theater 3000. To sum it all up, it’s another reliably bad, but perfectly enjoyable orchestration from one of Italy’s worst horror composers.