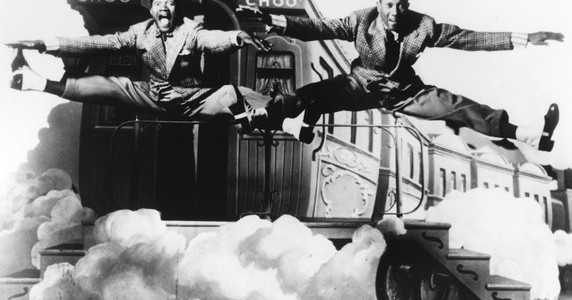 For Black History Month, I’d like to celebrate the careers of Harold and Fayard Nicholas, aka The Nicholas Brothers. They only appeared in eight Hollywood features, but their dancing has influenced everyone from Fred Astaire to Savion Glover. Because of their race, their numbers were usually unrelated to a given film’s plot, so the scene could be cut for distribution in the segregated south. But the very nature of film means that their legacy survives today.

Their first feature length musical was the Eddie Cantor vehicle, KID MILLIONS. Harold was 13 (!) at the time, Fayard was 20. Cantor had performed in blackface, as he does in this number, from the beginning of his career. I’m starting with this clip – featuring the song “Mandy,” which was written to be performed in blackface as a minstrel number – because it best represents the Hollywood of the Nicholas Brothers. They had to dance with Eddie Cantor-in-blackface because it was the only work they were going to find in the major studios. Watching them wipe the floor with him is immensely gratifying.

In 1941, the brothers appeared in the Sonja Henie vehicle SUN VALLEY SERENADE with another icon of Black Hollywood, Dorothy Dandridge (who would become the first African American nominated for a Best Leading Actress Academy Award in 1954 for CARMEN JONES). Dandridge does a fine job of keeping up with the Harold and Fayard, but they graciously escort her off the screen before kicking the dancing into high gear. It’s worth noting that the complete “Chattanooga Choo Choo” sequence is eight minutes long. First it’s played by Glenn Miller and His Orchestra, then sung by Tex Beneke, Paula Kelly and The Modernaires. The Nicholas/Nicholas/Dandridge section starts five minutes in, and they don’t share a second of screen time with a single white person. You can even hear the music come to a complete halt, very briefly, before it picks up again with Dandridge’s intro. A segregated number for a segregated country.

The Nicholas Brothers appeared in 1948’s THE PIRATE, with Gene Kelly. Once again, the number wasn’t integral to the plot, and Kelly didn’t just dance with them, he upped the ante by physically touching both Harold and Fayard. The message was clear: If the Nicholas Brothers were going to be cut, so was Gene Kelly. THE PIRATE was a flop (the campy kind!) so Kelly’s ploy was more of a symbolic gesture, but at least it gave us this gem. Watch for the moment when the trio runs up a short flight of stairs and sees a noose. Kelly’s character was trying to avoid execution forsomereason, but there’s no denying the significance of two black men recoiling from the its sight. By the way, if the song sounds familiar, it’s because Arthur Freed essentially stole it for “Make ‘Em Laugh” in SINGIN’ IN THE RAIN.

And speaking of SINGIN’ IN THE RAIN and “Make ‘Em Laugh,” you know how Donald O’Connor ended that number by running up the side of a wall and flipping over? That was a direct homage to Harold Nicholas in ORCHESTRA WIVES. “I’ve Got a Gal in Kalamazoo” also really gave them a chance to sing. Coming from the same studio as SUN VALLEY SERENADE a year later, there are naturally a lot of similarities in the numbers: Same songwriters, same band, same lead vocalist, same vocal group, same segregation. You can see the complete number here.

“I’ve Got a Gal in Kalamazoo”
Music by Harry Warren; lyrics by Mack Gordon
from ORCHESTRA WIVES
Director: Archie Mayo
Nicholas Brothers dances staged by Nick Castle
Performed by Glenn Miller and His Orchestra and The Nicholas Brothers

And finally, the performance that Fred Astaire called the greatest dance number ever filmed, 1939’s “The Jumpin’ Jive” from the 1943 film, STORMY WEATHER. The song opens with some primo scatting by Cab Calloway, and then the Nicholas Brothers take over.

There’s a lot more Nicholas Brothers footage on YouTube. You can trace their entire careers through film clips and television appearances. Of all the movies they appeared in, I highly recommend STORMY WEATHER. What little plot there is only acts as a showcase for the best African American musical acts Hollywood had to offer: The Nicholas Brothers, Lena Horne, Cab Calloway, Bojangles, Fats Waller, Dooley Wilson, and Katherine Dunham and Her Troupe. To make a tired point, talent knows no color.

…and that’s why I love musicals.