I love musicals. I love Disney. It’s Halloween. So here are some of my favorite Disney witches and their magical musical melodies.

A quick note before we start: I’m only including witches this time. So fairies, genies, wizards, magical nannies, snow queens, and wicked stepmothers will have to wait their turn, even though I really wanted to call this piece “Bibbidi-Bobbidi-BOO!”

Let’s begin with the black sorcery of Madam Mim from THE SWORD IN THE STONE. In “The Marvelous Mad Madam Mim,” she introduces herself to the future King Arthur, who has been turned into a bird by Mim’s arch nemesis, the wizard Merlin. The song runs less than two minutes, but it’s a delightful scene. Legendary Disney songwriters Richard M. and Robert B. Sherman essentially wrote the sound of a witch’s cackle into the melody. Martha Wentworth tears into it with everything she has, leaving no bit of celluloid scenery unchewed, and the animators match her at every turn.

Music and lyrics by Richard M. Sherman and Robert B. Sherman

The Sherman Brothers followed THE SWORD IN THE STONE with MARY POPPINS (1964), picking up Oscars for Best Original Song (“Chim-Chim-Cheree”) and Best Score. That film was so successful that Disney re-teamed MARY POPPINS’s songwriters, screenwriters, director, editor, music arranger, and leading man for BEDKNOBS AND BROOMSTICKS in 1971. BEDKNOBS AND BROOMSTICKS, set in England during World War II, is the tale of Miss Eglantine Price, who learns witchcraft in the hope of stopping a Nazi invasion. She’s particularly interested in the Substituiary Locomotion spell, which causes inanimate objects to come to life.

from BEDKNOBS AND BROOMSTICKS (Disney, 1971)

Music and lyrics by Richard M. Sherman and Robert B. Sherman

The sequence starts with a pretty standard incantation (see SNOW WHITE below), but the spell doesn’t work. So the headmaster of the Emilius Brown Correspondence College Witchcraft (David Tomlinson) and the three war orphans Miss Price has taken into her home help her step up her game. The payoff comes at the film’s climax, when Miss Price bewitches an army of armor (from the local armory) to fight off the Nazis (while chanting the magic words, natch).

The Evil Queen in SNOW WHITE AND THE SEVEN DWARFS (1937) never sings, but I wanted to include her anyway because of how effectively the music is used during her transformation scene. Queen Grimhilde (yes, she has a name) is so evil that she’s usually referred to as simply “The Evil Queen.” Not even “The Evil Queen from Snow White,” just “The Evil Queen.” The Queen is so jealous of her stepdaughter Snow White’s beauty that she disguises herself as an old hag in order to trick the girl into eating a poisoned apple. 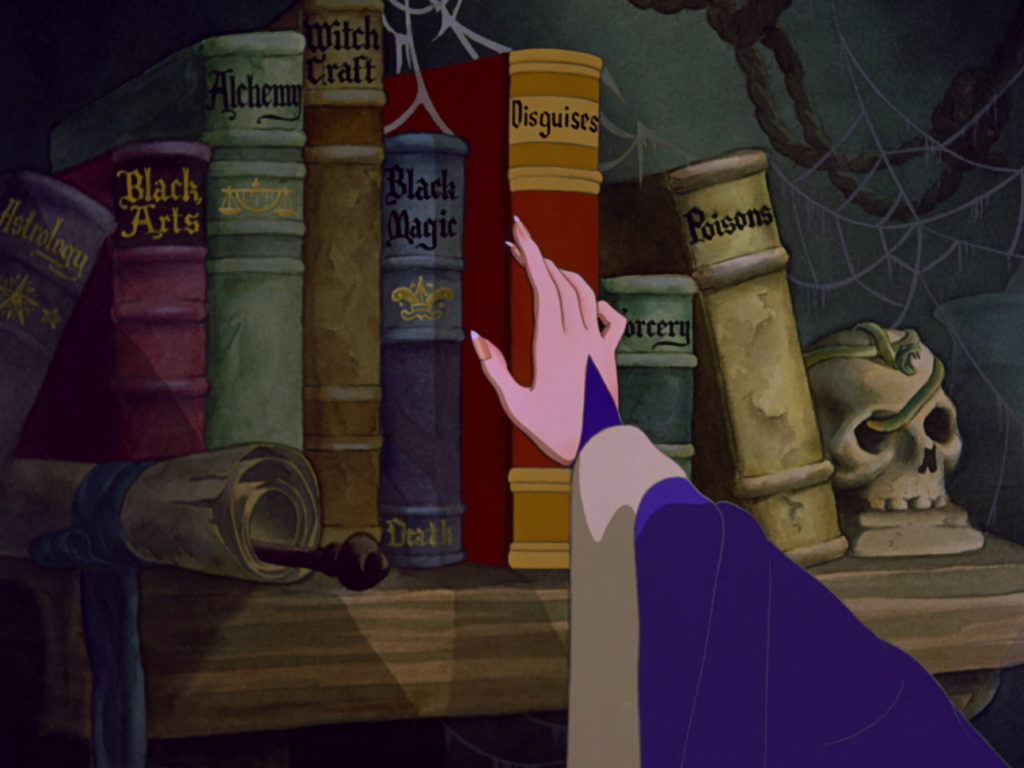 She begins with an incantation. While it’s not a song, it’s written, like lyrics, in rhymed phrases, and the Queen (voiced by Lucille La Verne) delivers the spell with a rich, deep intonation. There’s no song, but it has the feel of singing, and it’s pitch-perfect for the mood. La Verne’s performance, combined with Paul J. Smith’s outstanding orchestral score, made for some powerful nightmare fuel for generations of little kids:

from SNOW WHITE AND THE SEVEN DWARFS (Disney, 1937)

Composer Alan Menken and lyricist Howard Ashman revitalized Disney Animation Studios with THE LITTLE MERMAID, kicking off the “Disney Renaissance” in 1989. Their approach to storytelling and songwriting was influenced by musical theater as much as it was by Disney’s own legacy. Before THE LITTLE MERMAID, their biggest hit was the long-running (1982-1987) Off-Broadway musical Little Shop of Horrors, based on the 1960 Roger Corman film of the same name, about a manipulative man-eating plant named Audrey, Jr. Menken & Ashman’s Off-Broadway roots are especially visible in “Poor Unfortunate Souls,” sung by the villainous Ursula the Sea Witch. Ursula is garish and glamorous, conniving and power-hungry. She’s Corman’s Audrey Jr. re-imagined as a drag queen. And we, as a society, are the better for it.

And, finally, here’s “I Put a Spell on You,” from HOCUS POCUS, a movie I’ve never seen, but which appears to have been created solely because someone at Disney realized that camp is essential to a baby gay’s development. They weren’t wrong.