This week, we here at Daily Grindhouse are taking a look at the films of THE HOWLING (1981-2011) series, notable for the impressive werewolf transformation in THE HOWLING (1981) – which beat AN AMERICAN WEREWOLF IN LONDON (1981) to theaters by four months – and for confusing werewolf mythology with vampires in THE HOWLING II: YOUR SISTER IS A WEREWOLF (1985). It’s also notable for having gone on for another six films despite the fact that the second one was called THE HOWLING II: YOUR SISTER IS A WEREWOLF, proof that the horror genre is both the best and the worst genre at the same  time. While THE HOWLING V: THE REBIRTH (1989) and THE HOWLING: NEW MOON RISING (1995) are both within the parameters of Cinéma Dévoilé, it is THE HOWLING VI: THE FREAKS (1991) that I will be talking about today because… I need to share my pain with others in a, frankly, sadomasochistic way that my therapist says is unhealthy.

The plot this time around is not overly complicated and, surprisingly, manages to be quite interesting when you take into account that it’s in service of the sixth film in a series that started out being about “werewolves are real.” A lone drifter, Ian (Brendan Hughes), wanders into a dustbowl town. He trades his carpentry skills fixing up a church for a place to stay. A carnival comes to town and we learn that Ian has been keeping track of when it appears, as well as the cycles of the moon. When Ian turns out to be a werewolf, the owner of the carnival, R. B. Harker (Bruce Payne), captures him and puts him into his freakshow. Other stuff happens and eventually Ian must go head to head with Harker who is, spoilers, the vampire that caused Ian’s lycanthrophy in the first place. 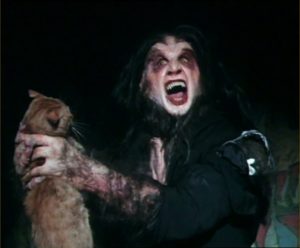 What could be a serviceable plot is hindered by the fact that this film was made by space aliens. Nothing makes sense. Despite the fact that creative choices had to be made all throughout pre-production, production, and post production, it manages to feel as if no creative decisions were made – it’s as if the film just materialized onto the discount vhs rack. I first noticed it’s oddness in the church-building montage that displayed the filmmakers misunderstanding of crafting montages or use of music; full scene play out with the same song layered overtop of them, leaving a mental disconnect between the events depicted and causing temporal alienation. The first scene introducing the carnival was shot like SANTA SANGRE (1989) mixed with a Lynchian use of music while managing, paradoxically, to feel uninspired. 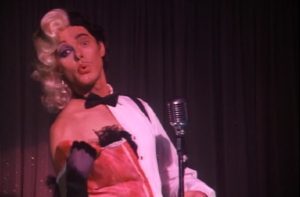 Uninspired is perhaps the best word for explaining the craftsmanship behind THE HOWLING VI: THE FREAKS. Camera setups focused more on two shots and flat compositions that would be fitting in the day-time soaps of the time rather than the  cinematic style that a werewolf vs vampire in a carnival, à la UNDERWORLD (2003) meets SOMETHING WICKED THIS WAY COMES (1983), properly requires. What’s more, the film has an inconsistent use of visual language and mistakenly moves into a crane shot, meant to impress the audience with the scope of the carnival, that only serves to reveal the lack of budget that was put into building sets. When the film moves inside of the freak show, whose interior size only serves to convince the audience that the location was not present in the crane shot, the floor plan makes no sense and it is shot in angles that fail to convince the audience of its actuality. Needless to say, this is not a film that would make Dogme 95 filmmakers happy. 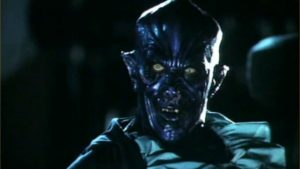 There are so many decisions about this film that I can’t begin to grasp. Here’s one example: When Ian is first captured, he is told that he murdered Elizabeth (Michele Matheson), the daughter of the preacher and his love interest. In telling Ian, the filmmakers are thusly telling the audience and we’re left to wonder if Ian really did kill her, if Harker killed her, or if it is all a lie. But we’re not left to wonder for long as the very next scene shows us that she is alive and well. So perhaps that piece of information was just to trick Ian into subservience through his guilt and we’re meant to understand it that way. But, surprise, surprise, that’s not so because in the scene immediately after we found out Elizabeth is alive and well, Ian receives that same information. Not even a total of five minutes have passed since Ian and us we’re told she was dead so… why even include it? 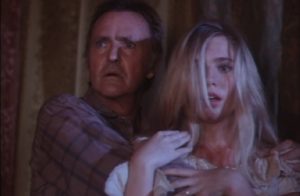 Why, indeed? A question that many of the choices made during THE HOWLING VI: THE FREAKS leads the audience to ask, yelling at their nonresponsive tv in the dark at 4 a.m in morning until the upstairs neighbours pounds on the ceiling. Out of all the films we have looked at for Ciméma Dévoilé, it is THE HOWLING VI: THE FREAKS that leaves me the most confused. If you’ve seen it, I would love to hear your thoughts. Leave them below and make sure to check out the rest of Daily Grindhouse’s HOWLING WEEK coverage. Next week we’ll be back on track with 1996’s entry into the HELLRAISER (1987-) series.

Tags: Cinema Of The Devoid, The Howling