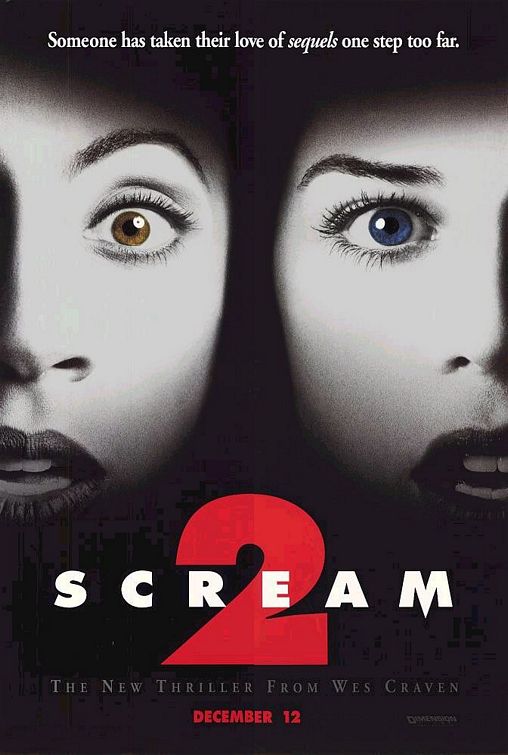 The body count is always bigger. The death scenes are always much more elaborate, with more blood or gore. Those are the rules for horror movie sequels as set out by the film geek Randy in SCREAM 2. After the success of the first film kicked off the ‘90s teen-slasher boom the previous year, Wes Craven returned to the director’s seat again to helm another Kevin Williamson script — albeit this time lacking the cohesion and polish of the first film’s writing, and instead making up the deficit with nearly twice the budget. It would seem the only rule that Randy forgot to mention is that the quality will be half as impressive, a shiny new ‘90s veneer not quite hiding the imperfections riddled throughout. 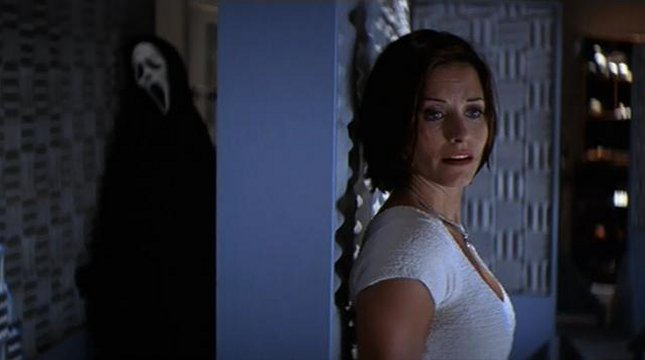 SCREAM 2 follows Sidney Prescott, survivor of her boyfriend’s psychopathic killing spree in SCREAM (1996), now in university (a feat of impressive merit when one considers she was 23-years-old and only in high school the previous year). When a couple of nobodies (with no connection to any of the characters, personally) are murdered at a showing of the film Stab (a tongue-in-cheek version SCREAM, based on the diegetic events of the first film and marketed like a William Castle flick), Sidney worries that the killings have started up again. They have, and this time, anyone could be a victim (except not really, because Dewey managed to live through a brutal stabbing… again). Who’s the killer? Is it Sidney’s boyfriend? Is it the slightly-deranged film major who’s only in a couple of scenes? Is it that reporter who keeps showing up despite adding nothing to the plot? Probably! Because SCREAM 2’s twists and turns are choreographed in an obvious and obnoxious nature that betrays the impressive writing that the original film was known for. Maybe it’s actually a bad idea to rush a sequel to production? 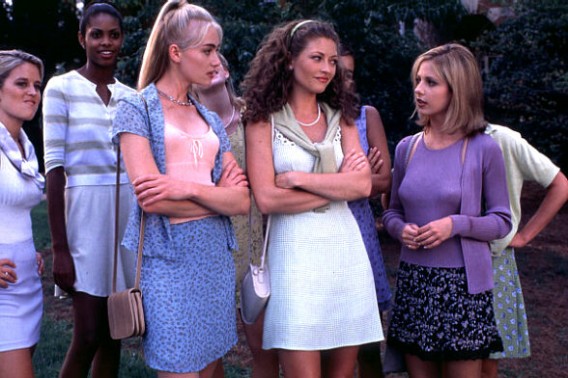 To say I didn’t like SCREAM 2 would be unfair, but it was far less enjoyable than my nostalgia had lead me to remember. It’s bigger and bloodier, yes, but it’s also sillier and less polished than the original in a detrimental way. While I try to avoid comparing the sequels I’ve explored to the originals, my goal has been keeping my point of view focused between 1990 and 1999. SCREAM 2 came out a year after SCREAM, so both are solidly located within my framework and of the both, only one is solid. Wes Craven and Kevin Williamson returning fails to impress: Craven is not exactly a great director, though he is often slated as such — he is, to me, great at recognizing a powerful story rather than actually bringing that story to life — and Williamson’s first script was a product of years of perfecting, rather than quickly written for cash like what we have here. SCREAM 2 has the budget of a legit film, but the restrictions of the Cinéma Dévoilé. Unfortunately, it’s an example of the change that SCREAM sparked in this period. 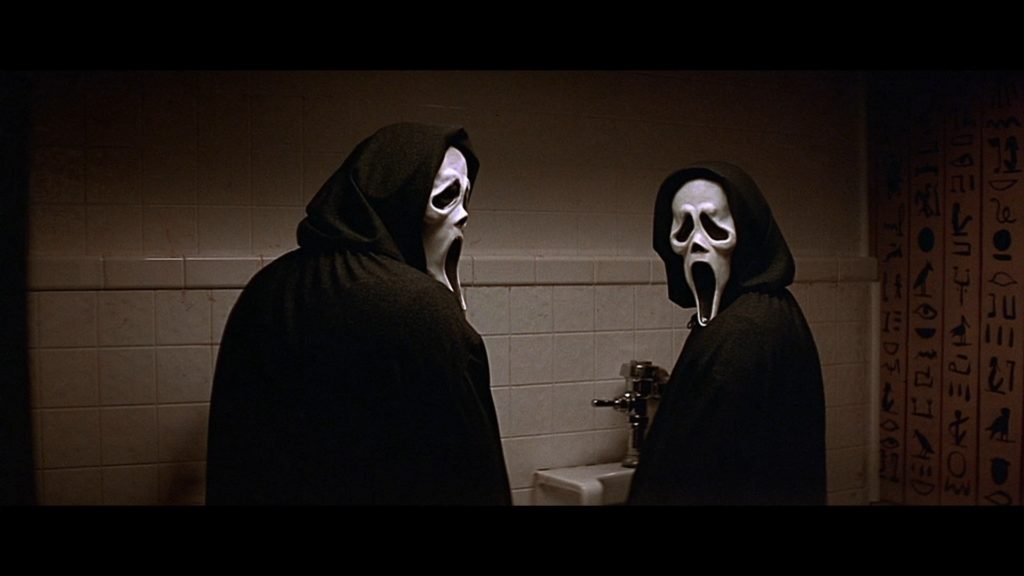 SCREAM brought the beginning of the end of the Cinéma Dévoilé. We’ve yet to explore the series’ that found their beginnings throughout the era, but an exploration of the sequels demonstrates a notable decline after SCREAM. In 1997, the only sequels of note were: SCREAM 2, AN AMERICAN WEREWOLF IN PARIS, NIGHT OF THE DEMONS 3, BURIED ALIVE II, HAUNTED SCHOOL III and WITCHCRAFT IX: BITTER FLESH. Compare that to 1995’s releases: WITCHCRAFT VII: JUDGEMENT HOUR, MIRROR, MIRROR III: THE VOYAGE, FACES OF DEATH V, TRACES OF DEATH III, ALL NIGHT LONG 2, WITCHBOARD III: THE POSSESSION, XTRO 3: WATCH THE SKIES, CARNOSAUR 2, THE HOWLING: NEW MOON RISING, CHILDREN OF THE CORN III: URBAN HARVEST, LEPRECHAUN 3, CANDYMAN: FAREWELL TO THE FLESH, and HALLOWEEN: THE CURSE OF MICHAEL MYERS. If we follow through to 1998, we see sequels to CHILD’S PLAY (1988) and HALLOWEEN (1997), that take notes from SCREAM’s newly crafted Teen Slasher movement, we see a sequel to I KNOW WHAT YOU DID LAST SUMMER (1997), which was the first series to spring off SCREAM’s success; we also got sequels to five of the series that began in the ‘90s: SOMETIMES THEY COME BACK (1991), THE DENTIST (1996), SPECIES (1995), THE PROPHECY (1995) and the aforementioned I KNOW WHAT YOU DID LAST SUMMER. Only two sequels were released that follow the footsteps of of the pre-SCREAM section of Cinéma Dévoilé: CHILDREN OF THE CORN V: FIELDS OF TERROR and PHANTASM IV: OBLIVION. 1999’s even worse. SCREAM fired the first shot to Cinéma Dévoilé in 1996, and the rest of the decade was spent slowly bleeding out.

But that’s just for sequels. As we near the end of our first journey through the decade, we will be returning to 1990 to begin our next journey — this time focused on the films that stand-alone and/or started franchises of their own. We’ll be visiting icons of the Cinéma Dévoilé like Screaming Mad George, Brian Yuzna, Steve Latshaw, and many, many more. Following our second trip, we will chart our ways randomly through the chaos, for what’s more ‘90s than mindlessly drifting from place to place with no purpose. We will also be exploring phenomena that seem to arise throughout Cinéma Dévoilé like the 4-Space-Sequel and certain character archetypes that arise. I hope you have as much fun reading as I have writing them.

Come back next week when we’ll be exploring I STILL KNOW WHAT YOU DID LAST SUMMER (1998) a.k.a illogic the film. Stay spooky, Internet. 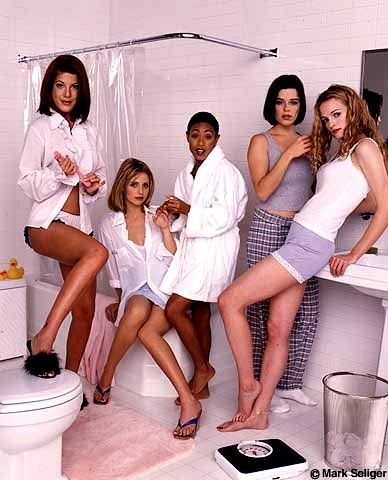 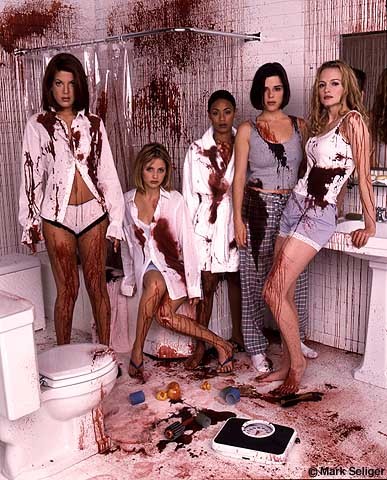