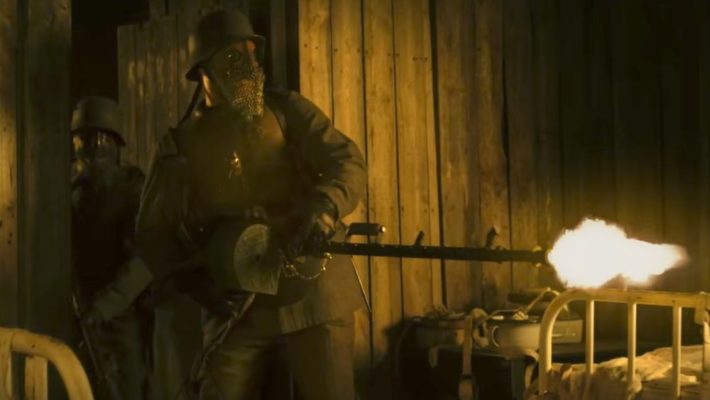 In the waning days of WWI, the higher ups in the German military know the war is a losing effort on their end. All they want is to broker a peace treaty that does not leave their country in a complete state of disrepair. But in several bunkers, nearly a hundred feet below the surface of the French countryside, they are concerned about the leftover bio-weapons experiments conducted by their resident mad scientist Reiner (Robert Stadlober).

British intelligence officer Jennings (Ted Atherton) is also interested in the bunkers, convinced that Reiner has been up to all sorts of unholy experiments underground (spoiler: he has). Jennings commandeers a mixed platoon of British and American troops and leads an expedition into the bunkers using shell-shocked Canadian soldier Berton (Rossif Sutherland)—an experienced “tunneler”—as their guide. What Jennings and the unwilling men he has forced underground do not know is that German officer Müller (Shaun Benson) is infiltrating the same bunker with the intention of destroying all of Reiner’s work in the name of saving an honorable peace. Of course, Reiner is prepared to protect his work at all costs from both Allies and Germans.

Co-writer/director Leo Scherman has created a tense creature feature/body horror/claustrophobic war drama that is dripping with atmosphere and uniformly good performances. While the story beats may feel a tad familiar, the good character work and attention to period details add welcome texture to a film that is very easy to like.

I only wish that Scherman had allowed a few of the character moments to breathe a little. The film sets up several intriguing characters who are all trying to make it alive out of a war that is almost over only to be pushed into a dangerous mission. While he does a great job of ramping up tension and going into full blown horror movie territory by the third act, the film would have benefited by fleshing out the characters just a little more in between racing to the next suspense/horror/action sequence.

Aside from that small quibble with the too-lean nature of the film, TRENCH 11 is an impressive genre flick that successfully recreates its WWI period setting on a (presumably) tiny budget. I highly recommend it.

After starting the day off on a good note with TRENCH 11, MOHAWK kicked things up several notches when it turned out to be one of the best films I’ve seen at this year’s Cinepocalypse.

Two years into the War of 1812, the Mohawk Tribe has stayed neutral as other Native American tribes have chosen sides between the Americans and the British. Despite this neutrality, their tribe has been decimated as they are caught in the crossfire and are killed by people on both sides of the conflict who just want any excuse to kill Native Americans.

In this already bloody situation, things are complicated further by the polyamorous trio of Mohawk warriors Oak (Kaniehtiio Horn) and Calvin (Justin Rain) and British spy Joshua (Eamon Farren). Even as Mohawk leaders reject Joshua’s pleas that they join with the British against the Americans, Calvin is ready to go to war because of the large number of deaths the Mohawk have suffered mostly at the hands of Americans. When Calvin—in a fit of anger—burns down an American fort, killing over twenty people, he puts himself, Oak, and Joshua on the run from driven American militia leader Holt (Ezra Buzzington), who leads a small group of soldiers (more resembling violent bounty hunters than military) in dogged pursuit.

MOHAWK is a tight movie that seamlessly flips from chase film to revenge film halfway through while never sacrificing character beats. Co-writer/director Ted Geoghegan (working from a script co-written by Grady Hendrix) gives equal time to Oak and Holt. While Holt is clearly the bad guy (given his rants about the superiority of the white race), his thirst for revenge against Oak, Calvin, and Joshua is driven by what he sees as the cold-blooded murder of the people burned alive in the fort. At the same time, Oak—who is the most level-headed character on display—is trying to protect the people she loves, even if they do rash, stupid things (in the case of Calvin) or are the ones who initially stoked the anger of vulnerable people into doing said rash, stupid things (in the case of Joshua).

While Geoghegan does a fine job of sketching out the characters and the anger that drives people on both sides of the conflict, he excels at pacing the film as an exciting, brutally violent action flick. MOHAWK is a mean film that never allows the viewer to look away from the grisly, ugly results of what happens when a man’s throat is slashed or a musket ball goes through someone’s head. It is also an angry film, highlighting the very long history we have in this country of racial intolerance and the injustice and violence that springs from such a pointless exercise in hatred.

I cannot say that MOHAWK is always an entertaining film, but it is impossible to look away. It has more to say about what is going on in the world now than most genre flicks, but it is also faster moving and more exciting than just about any studio action film of the last few years. Seek it out when it is released and you will be rewarded with one of the most visceral films of the year.

I missed seeing APPLECART at Fantastic Fest this year, so I was happy to get to check it out at Cinepocalypse. Even more intriguing is that it was a new cut based on the feedback that co-writer/director Brad Baruh had received after the film’s initial screenings. 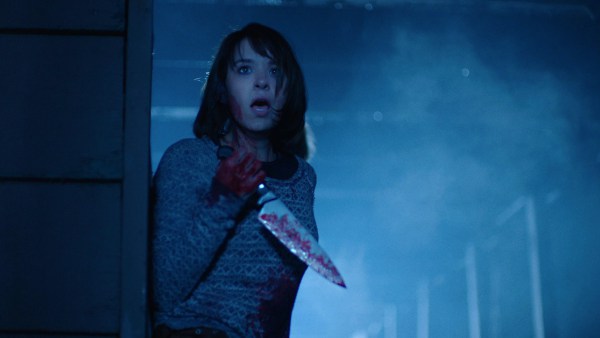 Casey Pollack (Brea Grant) drags her teenage daughter Jessica (Sophie Dalah), son Jason (Joshua Hoffman), Jessica’s friend Becky (Elise Luthman), and her husband James (AJ Bowen) to a cabin in the woods in a last-ditch effort to use the area’s promised holistic healing abilities to combat James’ cancer. But the family is only there for a few minutes before Baruh cuts to a dead-on parody of a true crime TV show that reveals Casey viciously kills her family for reasons that still baffle law enforcement. From there, things only get more bonkers as the action cuts back to the cabin with the arrival of a breezily rude stranger named Leslie Bison (Barbara Crampton). And did I mention the apparent coven of witches in the woods near the cabin? How about the fact that Leslie is running for governor? What about the idea that the TV show may be a broadcast from the future? And what about the bizarre prologue set in 1962 featuring a murder (with the victim played by Chase Williamson in a blink and you’ll miss him cameo) and a very unnatural pregnancy?

Needless to say, that is a ton of plot and narrative trickery for one movie to handle and Baruh is only partially successful at holding it all together. While I was never lost in the story, there are several moments and subplots that are brought up, but eventually do not pay off, making me wonder just how much story was left on the cutting room floor (beyond the extended true crime TV show sequences that were apparently trimmed from the cut shown at Fantastic Fest). Still, the film I saw suffers not from sloppy storytelling, but from being an overly ambitious attempt to tell a cabin-in-the-woods horror tale smashed together with a family dramedy and a dollop of political/cultural satire. 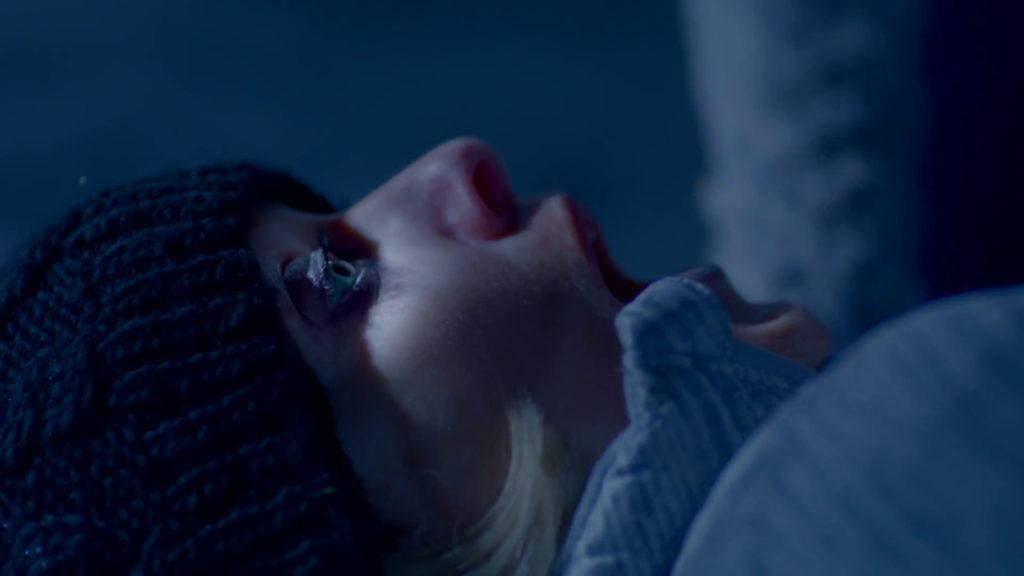 Baruh has the advantage of a stellar cast (with Crampton and Grant standing out), terrific practical makeup/gore effects, and a darkly comedic tone to help get over the film’s rough patches. It may be a little too chaotic and have more ideas than time to explore them, but APPLECART is never dull and I was always along for the ride. I’d rather films be too ambitious than settle for the routine. Sometimes that ambition leads to a messy narrative, but I am more than willing to put up with that messiness when the results are as entertaining as they are here.