The Chicago-based Cinepocalypse Film Festival has hit its stride this year, hosting a great number of world and midwest premieres rivaling those of Fantasia or Fantastic Fest.  In addition to the premieres, however, the festival has also been the home of several revival screenings, featuring rare theatrical showings of such genre favorites as BOUND, TALES FROM THE CRYPT PRESENTS DEMON KNIGHT, KILLER KLOWNS FROM OUTER SPACE, and HOWARD THE DUCK.

That last one kind of sticks out.  HOWARD THE DUCK (which Cinepocalypse presented on 70mm, no less!) isn’t really a well-loved masterpiece of comic book-based cinema.  An oddity by any stretch of the imagination, the George Lucas-produced HOWARD THE DUCK opened wide in the summer of 1986 and quickly became known as a box-office disaster, with the headline “HOWARD LAYS EGG” in Comics Interview summarizing the general audience response. 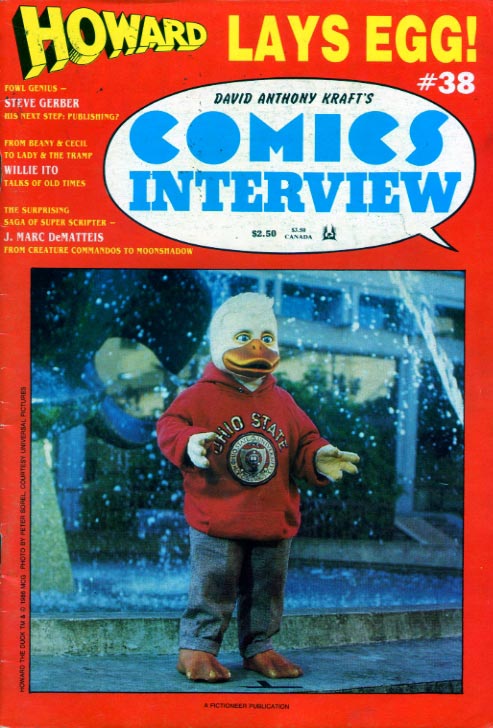 But much like its paddling protagonist, HOWARD THE DUCK, the film, was trapped in a world it never made.  1986 was probably the worst time period in cinematic history for a film based on Steve Gerber’s character to be made, and in order to sell a film in this era, Lucas and his team of producers found the worst possible way to adapt the character.

Gerber’s alien visitor to our world, introduced in 1973, was very much not only a product of its era, but a product of its medium.  Coming out of the pages of the horror anthology Adventure Into Fear, Howard’s tales started out as takes on other comic book genres, ranging from horror to sword and sorcery to, eventually, super heroes, throwing the lead character into a variety of situations that allowed for a smirkingly existential take on the world around him. 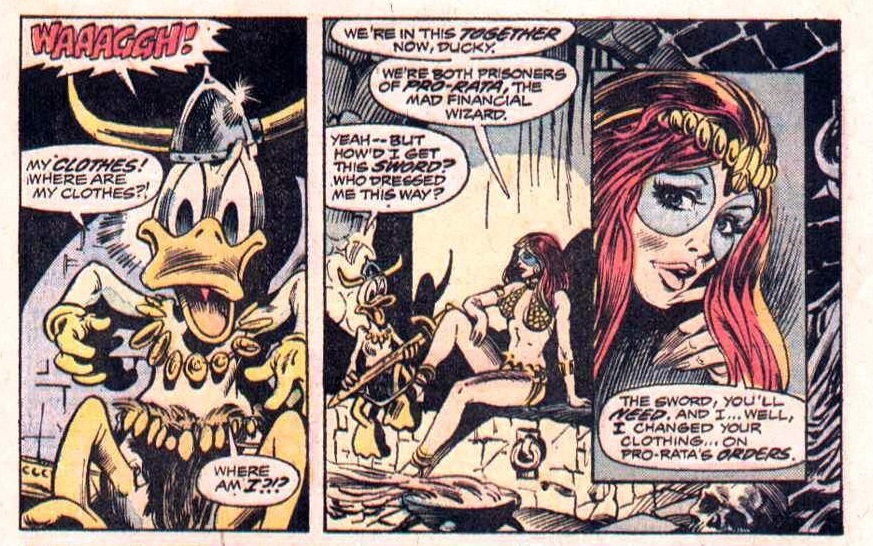 Lucas and HOWARD director Willard Huyck and producer Gloria Katz had apparently been interested in adapting Howard in the ‘70s, and the intention had originally been for the film to be animated, which would have allowed for a much more darkly comic tone and ambitious plotting to fit in with the likes of HEAVY METAL, ROCK & RULE or the works of Ralph Bakshi.  However, this era had passed by the time that HOWARD moved into production, and instead, we ended up with a relatively generic “duck-out-of-water” story that wasn’t really treading new ground (the main difference between films like STARMAN or E.T. and HOWARD is that Howard is just some guy who happens to be a duck) and seemed to be satirizing a genre that hadn’t even really existed yet.

The plot of HOWARD THE DUCK finds the titular waterfowl unexpectedly thrown to Earth from his home planet in which highly-developed ducks are the dominant lifeform.  Here, he befriends rock musician Beverly (Lea Thompson), who attempts to assist in getting him back home, or at least acclimated to Earth’s anti-duck culture.  Along with the assistance of Beverly’s museum employee friend Phil (Tim Robbins), Howard makes his way into the brave new world, though he soon discovers that the way we arrived on Earth may also be causing a much more sinister presence to come to our planet.

The results were dismal, though not nearly the disaster that the film’s reputation suggests.  Financially, the film may have “laid an egg,” but it still made more money than many films of the same year now considered genre classics, like MANHUNTER, BIG TROUBLE IN LITTLE CHINA, HIGHLANDER, LEGEND or the similarly Lucas-produced LABYRINTH.  The first reel is relatively clever (though the Howard-is-a-duck-and-here-are-some-duck-jokes bit wears thin about two minutes after Howard gets to Earth) and Jeffrey Jones gets some decent moments as the Darklord-possessed scientist.  (I’ll defend his delivery of “She took my eggs” as comic perfection.)  Brief moments of satire, such as the “Cajun sushi” diner motif, slip through, and the Lovecraft-inspired stop-motion monster that appears during the film’s climax would have been welcomed in a Charles Band film with open tentacles. 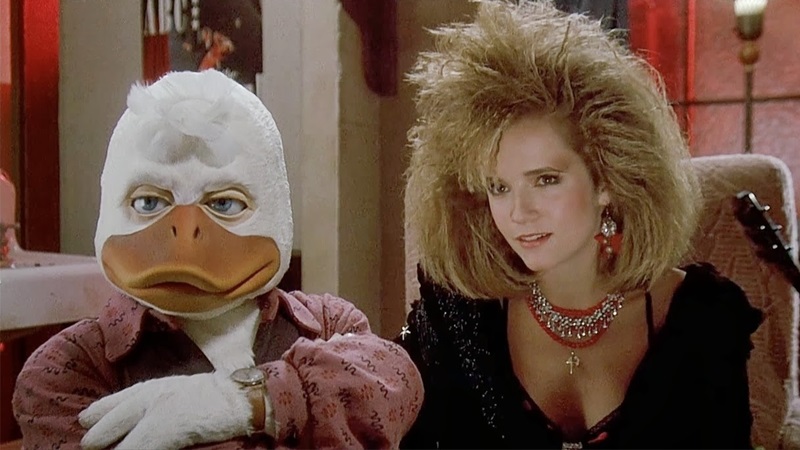 But don’t worry, true believers, I come to bury HOWARD, not to praise him.    In dismissing the context of the Howard the Duck comics, HOWARD THE DUCK isn’t left with anything to do but plod through a generic comic adventure story that misses out on much of the adventure and pretty much all of the comic.  The actual plot line of our (ostensible) heroes warding off an invasion of Earth doesn’t start until halfway through the film, and if you take out references to waterfowl, the film is left with not so much “jokes” as “the culturally-agreed upon idea as to what served as shorthand for humor.”  Want to hear someone say “talk to the hand?”  HOWARD’s got it, and had it come out a few years later, we’d no doubt have seen characters “have what she’s having” and append their sarcasm with “NOT!”  It feels less like an attempt to film Howard the Duck than a shoddily-written, big-budget pilot for ALF, which premiered a month after HOWARD and, honestly, led many of the same ideas to better results in 1996’s PROJECT: ALF.

The least interesting thing about HOWARD THE DUCK is, criminally, Howard himself, an awkward-looking man in a suit that, while not nearly the nightmarish spectacle of a live-action Garbage Pail Kid, isn’t really eye-catching either.  (The aforementioned ALF or the previous year’s SHORT CIRCUIT both did a significantly better job of finding ways to place charisma onto inhuman characters.)  The script gives him little more than resigned, well-aged quips to work with, and he’s never given enough of a personality, a damning death blow in a film that so desperately needs one.

Oddly enough, HOWARD THE DUCK’s lack of ambition beyond putting together a threadbare action-comedy-sci-fi film deeply rooted in the 1986ness of it all may be its greatest asset 32 years later when seeing it with a large crowd.  The audience had a great time with its natural ridiculousness, as dialogue and minor touches have now, with thirty years of cinematic and cultural evolution, become more enjoyable as glimpses into a time in which anything about HOWARD seemed even mildly appropriate.  The added effect of “what the hell were audiences in 1986 thinking about these weirdly sexy duck scenes in a PG-rated film” gives the film a depth that it never would have had upon first release, making it a rousing good time, even if it’s a pretty awful film.

This doesn’t, by the way, mean that I recommend watching HOWARD THE DUCK in the comfort of your own home without the benefit of raucous friends, booze, or both.  That way lays madness. 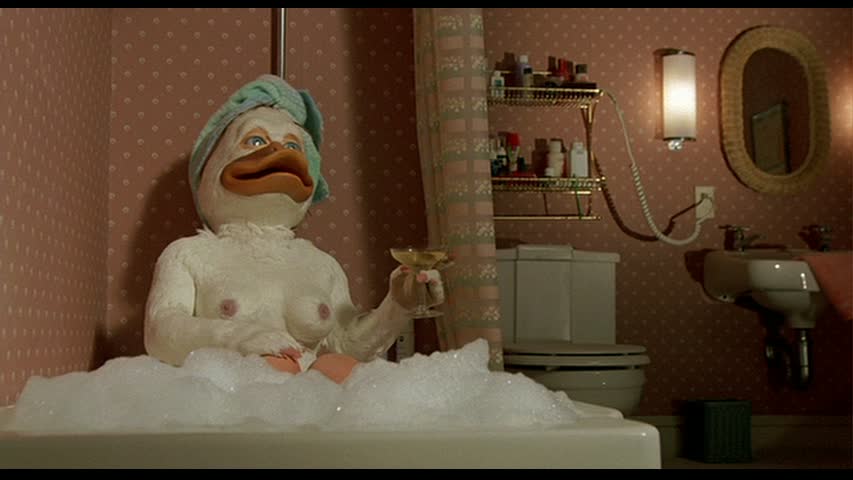 Still, it’s disappointing to think what could have been done if the filmmakers had used Gerber’s satirical creation as a genuine inspiration, and created an animated spectacle that, honestly, could have had plenty of reference material to riff off of.  While the comic satirized genre comics, there’s no reason a film couldn’t have been more of an anthology, riffing off of the movie genres popular at the time.  Unfortunately, thanks to the needs of Hollywood, we were deprived of an animated HOWARD THE DUCK in the world of CONAN THE BARBARIAN, STAR WARS or ALIEN that we so richly could have used.  It probably wouldn’t have made any more money than what eventually was produced, but at least its reputation would be something more than as a failed footnote in the Marvel Comics cinematic legacy.