On August 28th, 1917, in New York City’s rough-and tumble Lower East Side, the most visionary and significant artistic innovator of the 20th—and, so far, the 21st— century was born. I say that without a hint of hyperbole, exaggeration or, even more appallingly, irony, because the boy that Rose and Benjamin Kurtzberg named Jacob (or, in their native Hebrew, Ya’akov) went on to shape modern popular culture—and, by extension, culture as a whole—more than anyone else you can name.

And speaking of names, he had many in addition to the one written on his birth certificate. Some called him Jolly, some called him The King Of Comics. Some even shortened that to simply “King.” Early in his career he experimented with nom de plumes such as Fred Sande, Curt Davis, Jack Curtiss, and Ted Grey, among others. But the “handle” by which he is best known is the professional moniker that he stuck with, the one that would adorn all of his monumental works in the decades to come, the one that would eventually be engraved on his tombstone… 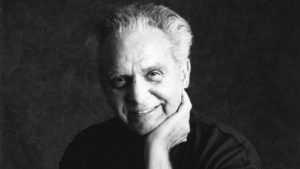 If you love it, odds are better than good Jack created it: Captain America, The Fantastic Four, The Hulk, Thor, Iron Man. Black Panther, The Avengers, The X-Men, The Silver Surfer, The Inhumans, Doctor Doom, Magneto, Nick Fury and S.H.I.E.L.D, Galactus, Darkseid and The New Gods, Kamandi, The Demon, and The Newsboy Legion. 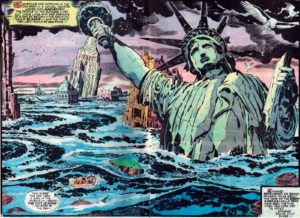 He created the entire romance comics genre. And all this? It’s only the tip of the iceberg. 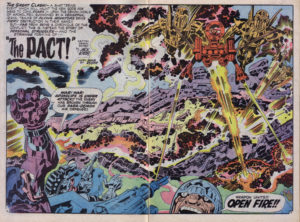 Jack Kirby created characters as effortlessly as most people concoct excuses. He was literally a non-stop idea generator. And his ideas stuck. The overwhelming majority of them have not only stood the test of time, they’ve gone on to earn billions of dollars. What is cynically called “intellectual property” these days? Most of it came from one man’s intellect. 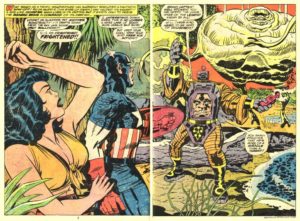 Here’s the damndest part of all, though: he never slowed dow and he never stopped. Innovation was in his blood. He may not have created the comic book and he may not have created the super-hero. However he re-created both so many times that they would be unrecognizable today, if not extinct altogether. And with each successive project he undertook, he went bigger and bolder. He challenged himself to push beyond what he’d done before, and to re-shape not only his readers’ expectations, but their perceptions. 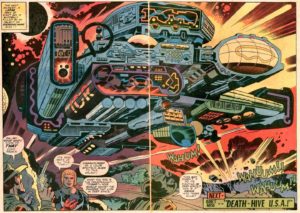 No less an authority, Grant Morrison has called Kirby “the William Blake of the 20th century.” The comparison is apt. Like Blake, Kirby seemed attuned to something beyond that he was able to translate into the immediately recognizable. He filtered complex thought-forms into visionary illustrations and stories that were both mythic in scope and human in scale. The universe of the imagination was his playground.  He not only went to worlds far beyond our own, he invented them time and time again. 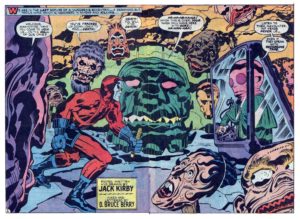 Jack Kirby re-wrote the rules with explosive force. While his predecessors concentrated on making four-color action smooth-flowing and balletic, he set out to sock you in the jaw. While those artists went for something akin to formal grace and even elegance, he went for impact. Art that you’ll always remember is nice, but art that makes you remember how it felt to see it for the first time with each subsequent viewing is something else altogether. That’s, as the kids say today, “next-level shit.” 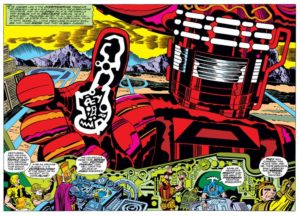 Look beyond comics for a minute and consider films. Consider that Jack Kirby gave us “The Source” and Orion being Darkseid’s son before George Lucas gave us “The Force” and Luke Skywalker being the progeny of Darth Vader. Ask yourself if the concept of the “blockbuster” film as we’ve come to know it would exist if not for Kirby. The scale, the magnitude, the grandeur of the multi-million-dollar Hollywood production—Kirby did it all on the printed page first. 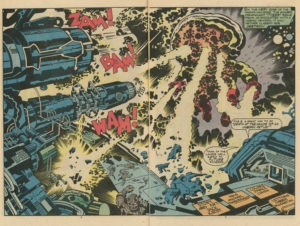 How about video games? Today’s “POV” and “multi-player/interactive” games all put the action right up “in your face.” Who was the first person to introduce that perspective? To put the consumer right in the middle of the action and “see” things from their vantage point before he put pencil to paper? You got it. 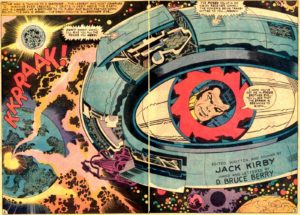 To drag things back to the medium that Kirby not only operated in and excelled at but flat-out owned, there are entire artistic tropes that he devised from whole-cloth and that remain entirely his as surely as the label “King Of Comics” does and always will : “Kirby Krackle.” “Kirby Tech.” “Kirby Collage.” All these are spoken of not only with awe, but with reverence. There’s nothing else like ’em. There never will be. 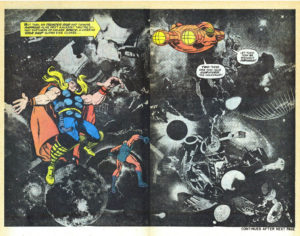 Let me add one more innovation to the list that The King never gets enough credit for: “Kirby Dialogue.” It was singular. It was, appropriately, mythic. It was as unconventional as his art and every bit as effective. It contained—and communicated—entire universes of meaning. It was magnificent, in the strictest dictionary definition of that word. 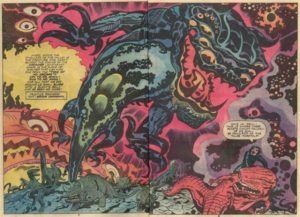 What could motivate one man to do all this, to reach for the stars and bring them down to the rest of us day in, day out? How about love. Kirby was never too proud to admit that he was—at the end of the day—a worker. And he took pride in how hard he worked for the best and most noble reason of all: he was doing it to put food on the table and provide a better future for his wife, Roz, and their four kids. Sure, he wanted to keep us glued to the page, but he did so in order to provide for them. Intentions don’t come any more pure than that. 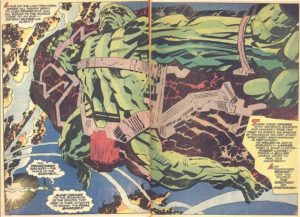 Kirby also served his country in the European Theater in WWII. Those experiences, as well as his hard-scrabble upbringing, frequently made their way on to the pages he wrote and drew, and that leads to yet another point I want to make: for much-larger-than-life modern mythology, the entire Kirby canon is, in all ways and at all times, a highly personal one. There’s more than virtuoso artistry and dynamic scripting in every Jack Kirby comic, there’s a hell of a lot of heart and soul. His work speaks to us all on a core level in a way no other comic-book creator has ever been able to duplicate — and trust me when I say, they’ve all tried. 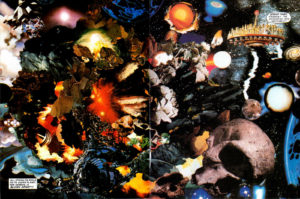 In the coming years, we’ll be hearing more about Jack Kirby than ever. The power of his imagination, having been tapped by the Marvel/Disney bean-counters and suits for well over a decade at the box office, is about to bear lucrative financial fruit for DC/Warner. Darkseid and the rest of the Fourth World characters, are about to take center-stage in the so-called “DCEU” in a big way. Residuals, which hopefully his heirs won’t have to fight tooth-and-nail for as they spent decades doing with the so-called “House Of Ideas,” should be enough to help guarantee them all a comfortable retirement. Even after 23 years after his passing at the age of 76, The King is still providing for his family and something tells me that if he’s looking down on this world, that fact makes him proudest of all. 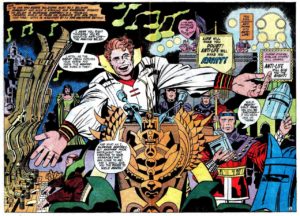 As for everything else going on down here on the mortal plane? Kirby saw it coming. Streaming entertainment, consumerist gluttony, pointless war, clashes of ideals, global communication (even Donald effing Trump) were all predicted, often with uncanny accuracy, in the pages of his books.  The King was a product of his times, without question — but he was also, and always, a few steps ahead of them. That depressingly-overused “genius” label that now gets applied to anyone who writes a half-decent novel or makes a watchable film? It’s actually too small in this instance. 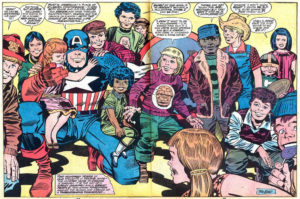 The legacy of this great man is destined to continue on for as long as there are ideals to aspire to and children (and grown-ups) to dream. For all the turmoil Kirby foresaw in the times ahead, his work always retained an essential and irreducible optimism: a belief that the human spirit would not only endure, but triumph. If you were to ask me to name a more aspirational, and inspirational, artist, I couldn’t do it. But Jack did a lot more than hope for the best from us — he was the best of us. 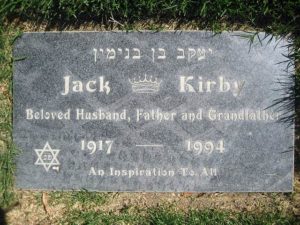 I have four heroes in this life : my mom, my dad, my wife, and Jack Kirby. The first two raised me, and continue to do so, because goddamnit, I’ll always have a lot of growing up to do. The third saved me. The fourth inspired me to dream and his work continues to keep those dreams alive. My existence wouldn’t be anywhere near as rich, as rewarding, as joyous without them. And they each, in their own way, show me the way forward every day. One could argue that I only personally know three of these remarkable, extraordinary individuals, sure…

But then I pick up any random issue of New Gods. Or Captain America. Or Kamandi. Or Machine Man. Or Black Panther. Or Silver Star. Or Challengers Of The Unknown. Or Mister Miracle. Or OMAC. Or The Sandman. Or The Forever People. Or my personal favorite, Captain Victory And The Galactic Rangers, and I realize—the fourth name on that list? I know him, too. And I know that, cliched as it may be to say, “He Will Always Be The King.”