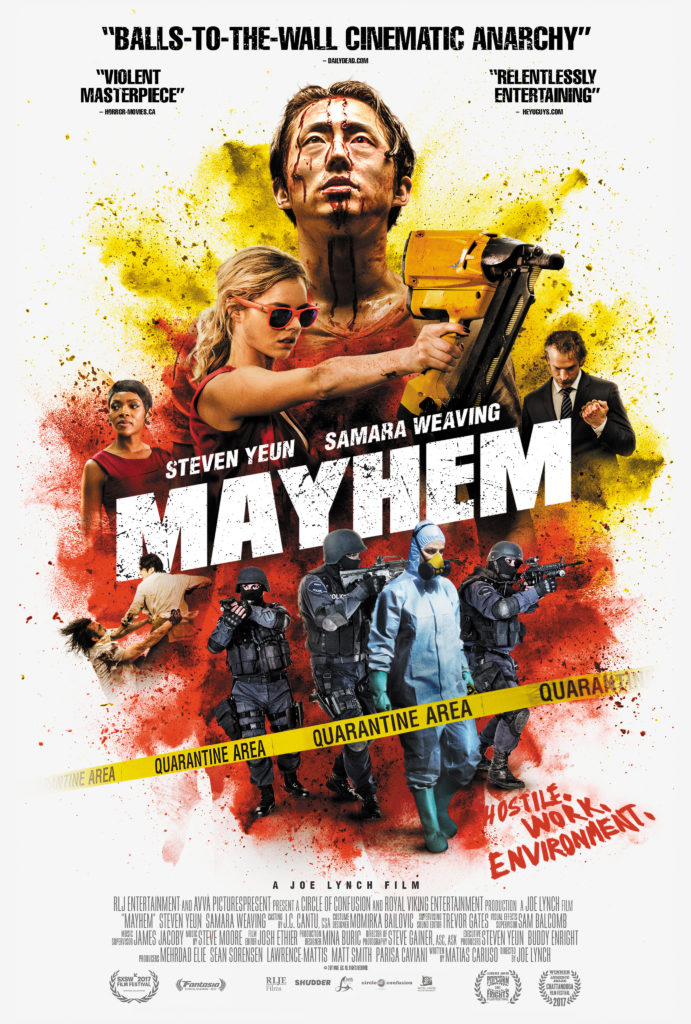 Joe Lynch directed this pitch-black horror-comedy, from a script by Matias Caruso, about a virus that spreads through a corporate office building, stripping away people’s reservations and making them act out on their worst impulses. The Walking Dead veteran Steven Yeun plays Derek Cho, a lawyer who must fight for his job after being wrongfully terminated in the middle of this chaos. Daily Grindhouse got a chance to talk to director Joe Lynch about his vision for the film.

Daily Grindhouse: What did you think of the script when you first read it?

Joe Lynch: I felt like it was written for me, like someone was in a cubicle next to me, sharing my plight. Right then I was working a corporate job to make ends meet, and I could feel both the internal and external depression.

Daily Grindhouse: That leads right into my question, concerning if you had any background working in an office that you were able to channel into the film.

Joe Lynch: Well, the idea of a director giving hard work and dedication all the time is not easy, you cannot live easily moving forward toward projects. What does Terrence Malick do between making movies? It’s ingrained in my DNA to keep working. There’s no such thing as financial stability. There could be three or four years between features, so I had to get a job. After I was the director of a feature film — me, I just like to work, and I couldn’t pass it up, and so I shared Derek’s frustration.

Daily Grindhouse: How did you work with the large amounts of voice-over narration in the film?

Joe Lynch: The voice-over that Derek plays through the movie is all in the script, and I was able to bring my own voice to it. I wanted this to be a story to be told as if from a bar or a coffee shop, not like a formal lecture. Just like a conversation you might have in a bar. Steven Yeun has a likeability factor, kind of like a Conan O’Brien, like you’ve known him for years. We peppered that dialogue throughout the movie, but when you tear it apart, you feel like you’re hanging out with the dude, and he wants to buy me a drink. In the last-minute voice-over or ADR stuff, we could add a little line here or there without being sloppy or irresponsible. I did a lot of voice-over myself, and when Steven came over, the voice-over was dramatically different. It was not normal for a voice-over, you can tell if someone is in a booth dictating to you. He nailed it, to make it feel like you were hanging out with him. I talked to him in between the lines of a conversation. It’s one of the most organic parts of the story. You really needed his perspective, or his version of events. If you look at the movie from an objective angle, they could be considered [something like the] Columbine killers — Derek’s perspective made it different.

Daily Grindhouse: How did you manage to strike the balance between a dark comedy and a thriller?

Joe Lynch: It was a challenge. One was it’s really mean and nihilistic, and another way, there’s no stakes involved. You had to sit back and laugh, and tamper with that every single day — whether you needed something more serious or less serious. In the edit, you balance out those options. You teeter-totter between those genres. If you look at something like RAIDERS OF THE LOST ARK and take the humor out, it’s still a great movie. But comedy is a sugar that makes the medicine go down.

Daily Grindhouse: Was the film metaphorical or allegorical in any way?

Joe Lynch: It came from a very personal place, where the metaphors and allegories filtered in. A lot of the things that happened to Derek happened to me. It was my commentary on the passive-aggressive nature of the corporate world. It’s like, I follow you on Twitter, so I’m allowed to base my judgement on you. No one is honest. It’s what happens when you use that virus that strips it away, like ‘lawyers are often dishonest.’ You could picture what would happen in a hospital or in a small town. In a corporate space, I thought I could get away with what I went through. Like HR, having to be dishonest with a smile on their face. It’s a play on what people deal with every day in the corporate world, what I would do.

Daily Grindhouse: How did you give instructions on how to act out the actors’ worst impulses?

Joe Lynch: I laid this mandate because there were so many people, so many supporting characters and extras, that we set up this space chart — there were five different stages. One for each different stage. Stage one was mildly irritable, and stage four was batshit crazy. It was incredibly helpful to the leads and main supporting cast, and very helpful to the extras. One of the mandates of being in the directors’ guild is you can’t talk to the extras, and many of them only spoke Serbian, so it became like a game of telephone — I need that guy to chug a bottle of Jack. I would have to talk to my second AD, and they would have to talk to the extras, and it was like they were spinning in circles. There was this constant case of communication that all stems from that idea that one bad extra can ruin everything.

Daily Grindhouse: What was it like staging all the action sequences in the film?

Joe Lynch: I loved it, because when you have no time and money, dealing with big action set pieces, you can get into a hole. I didn’t back myself into a corner or go for broke, or tell myself this was going to look exactly like OLDBOY. The Faith No More scene, I’d wanted to do for 25 years. They’re my favorite band, and using that song was like a dream come true. And I was able to give it actors and stunt performers, to make it like a dance sequence. It was very different than what you would expect, literally rolling with the punches every single day. 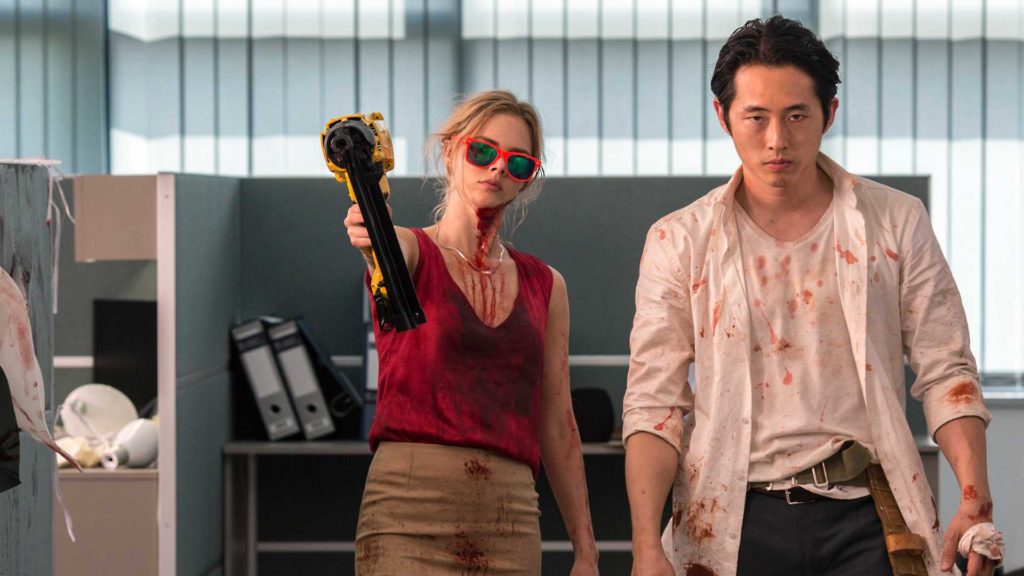 Daily Grindhouse: What were some possible influences on this movie?

Joe Lynch: Other than deriving from my own life, I usually wear my influences on my sleeve, but I didn’t really got into that. There’s one movie I can say influenced me, and that was THE WOLF OF WALL STREET. For most of Leo’s rants, the scope felt big. Clearly in Serbia, when you look outside it’s so different, and there are all these run-down houses — we thought, ‘how are we going to shoot?’ THE WOLF OF WALL STREET had blinds on every window, so we just did that. Also A CLOCKWORK ORANGE, from the moment I saw it, it advances with music and art connected with violent impulses to propel the story forward. And another one was 9 TO 5, the Dolly Parton movie. People love that movie, and it’s dark as balls. The fact that they’re trying to kill their boss. The last ten minutes is like a horror movie. Ever since I was a kid, that was interesting. As far as movies that take it into the workplace, 9 TO 5 deals with that.

Daily Grindhouse: How did working on music videos help shape your experience working on this movie?

Joe Lynch: In the music department, it was Faith No More. As a kid, I grew up with music videos and MTV, I knew who directed what, and I love merging music and visuals together like peanut butter and jelly. By the time I did it, you couldn’t do big-budget music videos, so it was like making lemonade out of lemons. Using that budget, and making it look as good as any Spike Jonze video. That kind of discipline led to movies. I got my first movie when someone saw one of my music videos and thought it had the feel of THE EVIL DEAD. So that got me in the door. You have to make a lot of little decisions, like where to put the camera, all these little tricks — MAYHEM would never have been the movie it was without music videos.

Daily Grindhouse: How did you go about creating the special effects for the violence and the blood?

Joe Lynch: You have to have a visual signifier for people who are sick, to tell the infected from the not-infected. I thought I had to buy a bunch of contacts, which was a big bone-headed mistake. Trying to get 200 contacts would break our budget, and sticking them in your eyes every day, with sweaty people beating the crap out of each other. Then I had help from our special effects department, who showed me Steve in The Walking Dead — I wanted visual effects without screwing with the performance or every shot. So they had to bring a PHANTASM-looking ball down, and we lost some time shooting. For fake blood, the lighting placement makes it feel like it’s not in the scene. We had to do this effect every time, or the eyeball effect would look like shit. Everyone is usually shocked that we used visual effects. Every time the eye moves, it looks like it’s actually attached to the eyeball. We got the special effects team to get it right for the whole movie, thank God.

MAYHEM is available now on VOD and Digital HD and will be available on DVD/Blu-ray on December 26th.