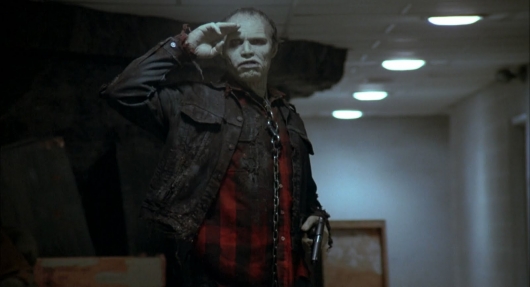 I’ve got to say goodbye to George Romero and it’s going to take a few. He popped into my life at various intervals, even in person once. It’s not a long story, and hopefully not a boring one. So, stick with me and we’ll see it though together.

It’s 1993 in Texas. I was eight years old, and it was the first time I experienced NIGHT OF THE LIVING DEAD. My mom worked mornings in Dallas, so by the time we needed to get to school, she barely had enough time to wake us up before she was gone. So me and my sister would get up and get dressed for school and watch TV while we did it. I still get dressed and watch TV to this day actually. So, another local channel, KTXA 21 would show horror movies and The Twilight Zone from 1am to 5am. One morning, they showed THE PIT. I would always manage to catch a promo for The Zone and get the willies terrified out of me. I mean, “Eye of the Beholder” is scary as hell when your brain is as malleable as it is at age eight.

My sister and I had to catch the bus, which ran down a road parallel to our driveway. We had to cut through out neighbors’ backyard to get there though. It was isolated and filled with abandoned buildings. So one morning, as fate would have it, I caught a clip from NIGHT. It was Kyra Schon stabbing her beloved mother, Marilyn Eastman, to death with a garden spade. Holy shit, that scared me more than anything I’d ever seen in my life. Then, worst of all, I had to cross my neighbor’s backyard and wait amongst the darkness, the shadows, the trees until the merciful moment when the bus would pick me up and take me to school.

I eventually got the courage to see NIGHT through bits and pieces, always appreciating the social commentary that it offered, understanding the power of casting a black actor in a lead role in a time where racial issues were at its damned hottest (besides now, of course). Every time though, no matter what my age, I still see that scene of the spade striking that poor mother’s skin, the blood splattering the walls – and presto, I’m taken back to elementary school and the worry that the bus would never come, but goddamnit, the zombies would.

It’s 1998 in Texas. I was thirteen years old and it was Saturday morning. I was waiting in my mom’s car for the school bus to arrive at Terrell Middle School. We were going on a field trip to Texas Stadium because Oliver Stone was getting extras for the filming of ANY GIVEN SUNDAY. I was so excited. Who wouldn’t be? I was obsessed with movies at this point, and I had already had a serendipitous experience with Oliver Stone as he’d filmed BORN ON THE FOURTH OF JULY in my old neighborhood of Oak Cliff. My dad took photos. Seriously.

Well, my principal had to deliver the hard news. We weren’t getting to go to the set to be extras. Boy, I cried that day. So my mom appeased me the way she knew how. Let’s rent DAWN OF THE DEAD. I had been so excited to see it as it was the talk of my classes with a school chum of mine. He’d had the book and we were excited by the prospect of Romero doing the long-sought after RESIDENT EVIL movie. So we rented DAWN from Video Express, the old HBO VIDEO copy and I watched it: 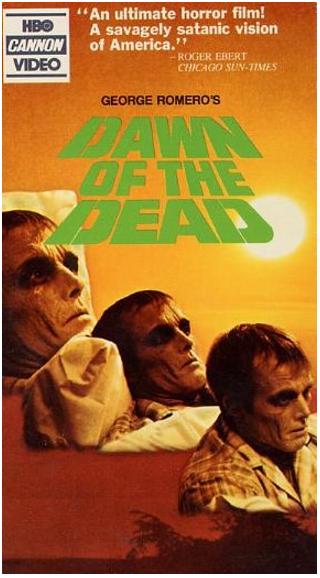 Holy shit, I didn’t know whether to throw up or cry at the loss of some of my favorite characters dying. To this day, I still feel that way, but not so much towards the throwing up. I felt it then, and I feel it now. DAWN OF THE DEAD is the best film ever made, full stop. It’s 139 minutes (you better be watching the extended version) of cannibalistic consumerism with four of the best written and acted characters in movie history. It’s the pinnacle of horror filmmaking and independent filmmaking. It made shopping malls so much cooler to me, it got me shifting towards Italian horror (how FUCKING iconic is that Goblin score?) and it gave me a full blown love affair with the works of Maestro Romero. In just those two hours and twenty minutes, you feel a connection to characters that I haven’t over seven seasons of The Walking Dead. Frannie’s a character with AGENCY, my god. That’s a bit that feels like a course correction from what Romero did with Barbra in the original NIGHT. My favorite moment, a moment that tells you who these characters are, comes right after the chaos of leaving the big city. The foursome who we’ll come to love over the course of the film are flying off. A twitchy cop keeps asking for cigarettes. They all shake their heads no. They fly off and light up. God, it’s brilliant.  And Roger … everytime I put the film on, I know my heart’s going to break when Roger gets bitten. I know my heart’s going to break as he and Peter, characters who started out as swinging dick adversaries, become close friends. And Roger dies and Peter takes care of him. It shatters me. The film is the umbllical that connects me and my friend Chris. I first met him and he was wearing a DAWN T-shirt. And from that point on, eleven years later, we’re still friends. Because of one movie. That’s power. We’ll text each other a simple, “PETER!” and know what we’re talking about. Or “We’ve got this thing by the ass!” Ultimately, the brilliance of the film is that Romero takes you through hell and just barely shows you glimpses of Heaven right as dawn breaks through the clouds.

I wanted to talk about DAY OF THE DEAD for a minute. My mom always confused it as the silly one with the talking zombie. That’s the stigma I had going into it as I rented it from Blockbuster Video on VHS and watching it too: 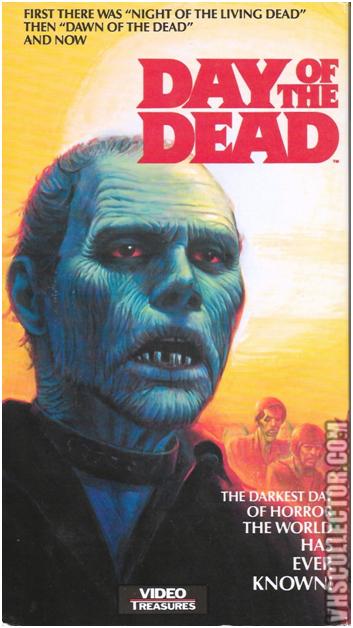 My feeling on DAY OF THE DEAD is that it’s the best of the Romero zombie films. It’s angry, it’s disgusting and it’s got a message it wants to tell you. The actors are loud, they’re pissed off and most of all, they’re the voice of fear and frustration at the end of the world. Because the film is isolated from the start, there’s not many travelling sequences from the get-go, there are big monologues that the actors get through to talk about their feelings. Bub is not just a silly zombie either. He’s such an integral and beautiful character. I felt so thrilled that they were getting a zombie to talk. Holy cow, they’re making advances here. And it also told me, that a zombie bite ain’t the end of the road for someone. But aside from the few main and sane characters, there are awful humans in the situation, including showstopper Joe Pilato. Look to Roger Ebert’s 1985 review of the film:

“In the earlier films, we really identified with the small cadre of surviving humans. They were seen as positive characters, and we cared about them. This time, the humans are mostly unpleasant, violent, insane or so noble that we can predict with utter certainty that they will survive.”

I always mostly agree with Roger Ebert for the most part, but disagree with him here. The point is, the characters in the earlier entries were positive, because the situation seemed hopeful. In the beginning, it’s always hopeful. But if we’re to the point of DAY OF THE DEAD, the characters know as well as the audience does, that they are so hopelessly, beautifully fucked. So yes, they go insane, yes they become violent. What the fuck else is there to look to?

I also think this monologue is beautiful:

“You want to put some kind of explanation down here before you leave? Here’s one as good as any you’re likely to find. We’re bein’ punished by the Creator. He visited a curse on us. So that man could look at… what Hell was like. Maybe He didn’t want to see us blow ourselves up, put a big hole in the sky. Maybe He just wanted to show us He’s still the Boss Man. Maybe He figure, we was gettin’ too big for our britches, tryin’ to figure His shit out.”

It’s 2005. Texas. I had just gotten my first job, post high school. I only got a few bucks on the paycheck, but once I cashed it, I knew where I was going. LAND OF THE DEAD, AMC Mesquite 30. Opening night. It was my first theatrical Romero film and I loved it. I was at that angry age (twenty), where all the politics and fucked up rhetoric was swirling in my head and here was this god of thunder making me confront it gnashing teeth and all in a big-budget zombie film. It was perfect timing for my still molding brain. I still love LAND, revisiting it last night, the night of his death. And it’s still hilarious and still as sharp as ever: the rich, baby, are always going to be richer than us. The effects hold up, the CG not so much. But I watched it with a big smile on my face. That’s the key, man. That’s how you gotta do it.

It’s 2007. Same chapter, same verse. A hot goddamn Saturday in Texas. My friend Chris and I, you met him in the segment on DAWN. We were headed into Texas Frightmare Weekend, its second year. We’re driving in his car, blasting Goblin out of his car windows and headed to a hotel in Irving, Texas. This year, we were going to meet George Romero. The line was at an ungodly length. I actually chatted up and met a friend, Elin, whom I’ve also had for a decade now (and saw DIARY OF THE DEAD with). When it came time to meet George, I was terrified. I talked to her, I talked to Michael Felsher, who was handling the table for George, and fidgeting with my backpack. I brought BRUISER (a film I’m not a huge particular fan of) for him to autograph because I figured he’d like that. Maybe he didn’t hear too many positive things about it. Either way, he could autograph the VHS. So, I chatted nervously about Tales from the Darkside and noticed I caught a crooked smile and a glance out of those mad scientist glasses. I finally talked to him, front and center. He smiled. I told him I loved his films. I felt like I was talking to a crush. My heart was fluttering unbearably. The man who changed my life, he was right here. He signed my BRUISER VHS with a big old “STAY SCARED!” And I never got to see him again.

But I always stay scared. And I’ll have his films to watch until I never wake to see another dawn again.