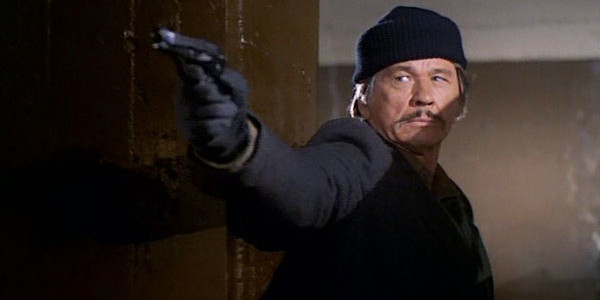 Most non-comic book films that turn into franchises follow a similar pattern, where the first one is a rather serious film and the following movies devolve in to nonsense. Often, it’s gloriously fun nonsense that’s more fun to re-watch than the original film. The ROCKY and RAMBO films come to mind, but no film franchise is better example of this than the DEATH WISH franchise. I suppose any sort of serious intent for the rest of the films went right out the window when infamous B-movie producers Cannon Films bought the rights to DEATH WISH. So we wind up with DEATH WISH 2, a rape-revenge film with the all the class and tact that the people who would bring us sensitive, thoughtful films like AMERICAN NINJA and INVASION U.S.A. could provide.

DEATH WISH 2 picks up four years after the events of the first film. Paul Kersey has gotten over any lingering guilt for, you know, murdering 10 petty criminals in NYC a few years ago, and has packed up and moved to Los Angles. He’s brought his daughter with him, and while she’s catatonic in a nursing home because she’s never recovered from her attack in the first film, she is doing about as well at the home as you could hope for. Paul and his new insanely hot girlfriend (played by his real-life wife, Jill Ireland, who he has a shocking lack of on screen chemistry with) pick up her up and go to a street fair on a lovely day. They’re all way, way too fucking happy for anyone in a DEATH WISH film. Will it continue, I wonder? 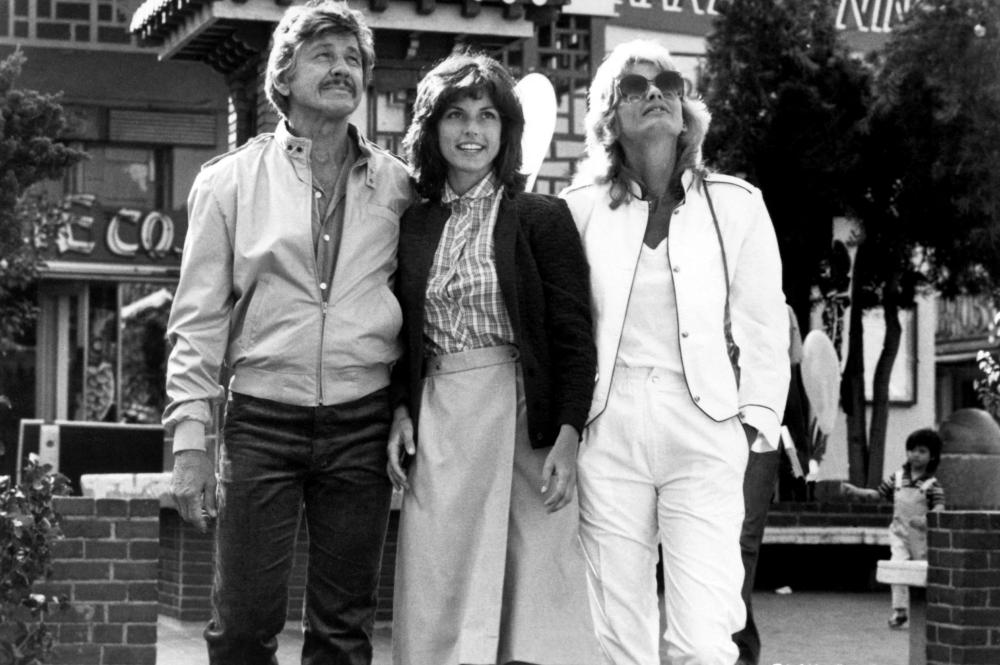 Well, of course not.  Next thing you know, a curiously multi-cultural gang of street punks shoves Paul, steal his wallet and run off. Kersey chases after them (pretty ballsy, considering there’s five of them and he’s well into his sixties at this point). He corners one of the punks in an alley, while the punk doesn’t have his wallet, he’s still game to whip out his switchblade and fight. Kersey then disarms him, roughs him up, and walks away. When his girlfriend asks him about what happened, he said he just forgot his wallet at home. He didn’t even want to brag about what he just did! If had done that, I’d have filmed it, put it on YouTube, and wouldn’t have shut the fuck up about it for weeks. But I guess that’s Paul Kersey for you. 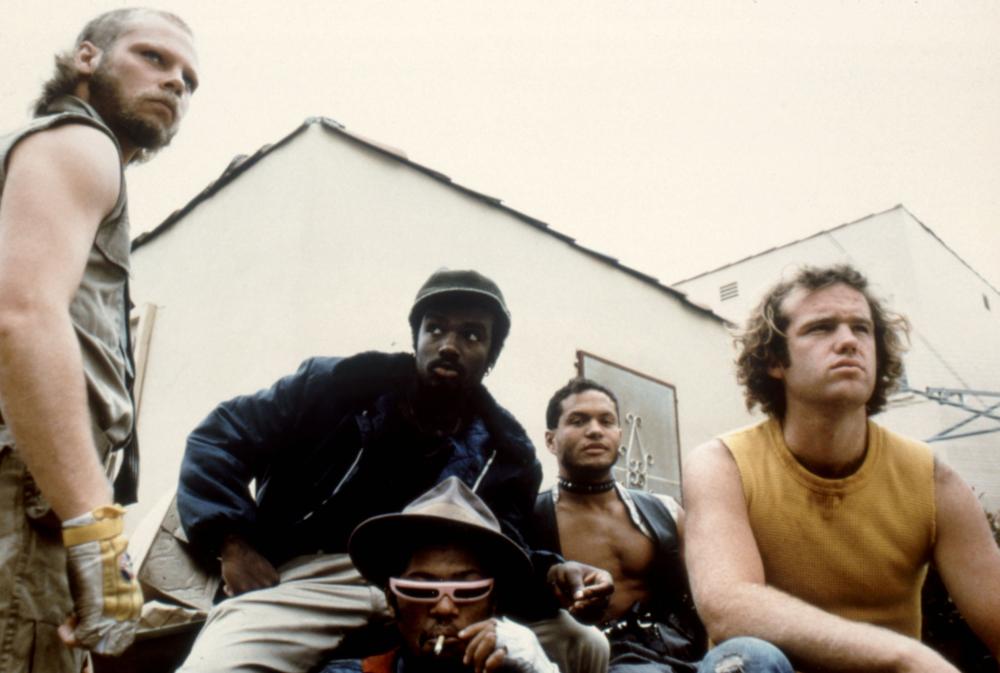 Now the gang, angered by the fact that one of the young dudes got his ass kicked by an old white dude who’s collecting Social Security, show up at the Kersey residence looking to settle the score, I guess. The gang’s motivation is never really addressed, which is normal for an action film — they don’t need reasons or motivation; they’re just creeps. 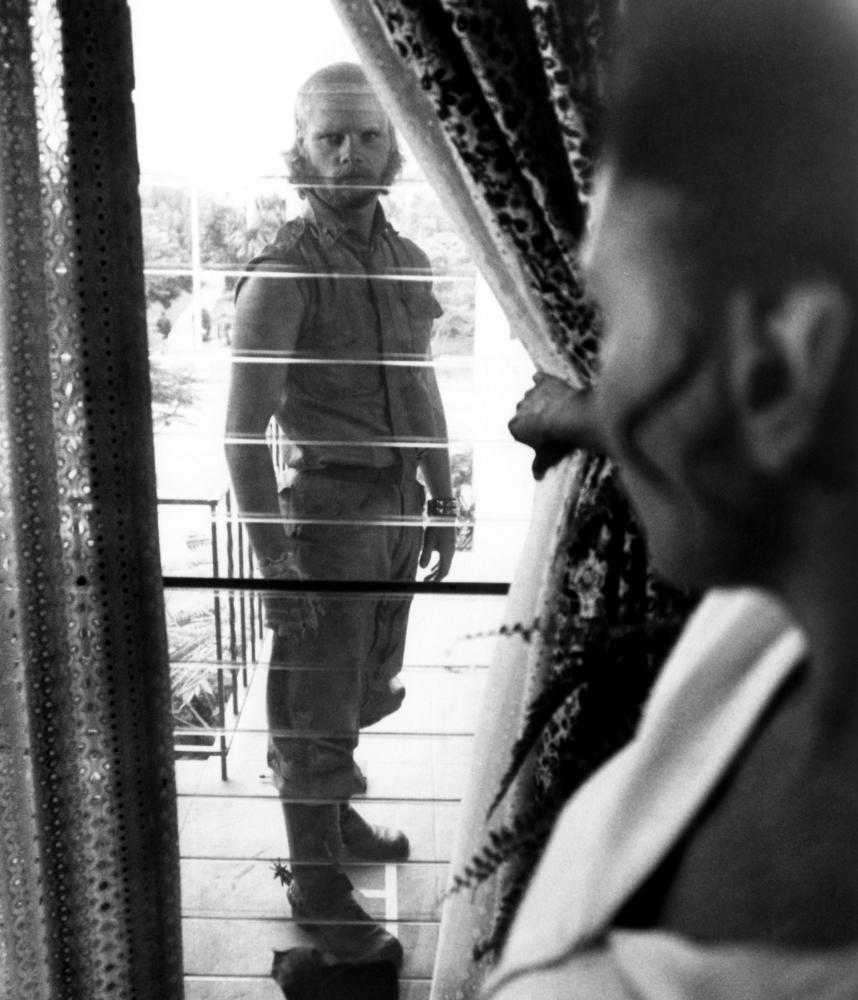 As much as I love the DEATH WISH franchise, there are way too many rape scenes in them, and there’s no doubt the rape scenes in this film are the worst of the five movies in the series. There are two of them here, back to back (Paul’s maid and then his daughter) and it’s fucking awful to sit through. Both scenes are far longer and way more graphic than they needed to be. I’m not sure why someone didn’t just cut them down. The film didn’t need it.

Also, it makes little sense, since the gang was looking for revenge on Kersey, but they were cool with just knocking him out and leaving him lying on the floor alive. But the gang felt the need to rape and murder his housekeeper and then kidnap his daughter. To top it off, after the daughter’s rape in a warehouse, she runs away and jumps out a window to her death when she’s trying to escape. It’s a tough watch. Start the film about 16 minutes in, if you’d like to avoid this scene. 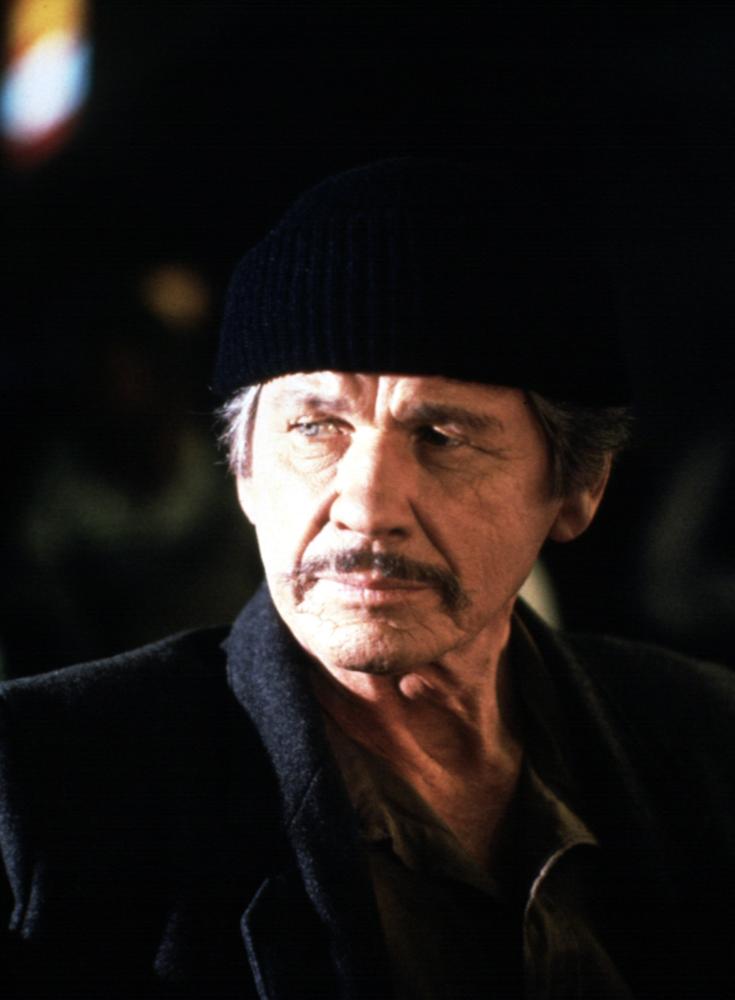 After a few scenes of Paul Kersey soul-searching out in a forest and whatnot, it’s time what we come to this film for — Bronson’s fucking revenge! DEATH WISH 2 is Paul Kersey’s transformation from the anguished vigilante of the first film into the wisecracking urban killing machine that he was born to be. In the first film, the violence is handled about as realistically as you can. Kersey is a dude who looks nervous and scared while he’s gunning people down on the streets. Now he’s a cocky, wisecracking badass! Paul rents a dirty room in the sleazy part of town, gets some clothes that I suppose are supposed to make him look homeless (he looks more like a gay longshoreman cruising the city for love, which is to be honest, is a good look for Bronson) and he’s roaming the streets looking for revenge.

Sure, he works his day job during the day, to keep up appearances. But at night, he swings by his sleazy batcave for a quick change and off he goes into the darkness looking for the scumbags, who he inexplicably finds in no time. It makes no sense, even though he’s seen them twice he knows nothing about the gang (not even one of their names), and as I understand it, Los Angeles is a big place. Paul Kersey, unlucky in love, unreasonably lucky with running into rapist/murderers. 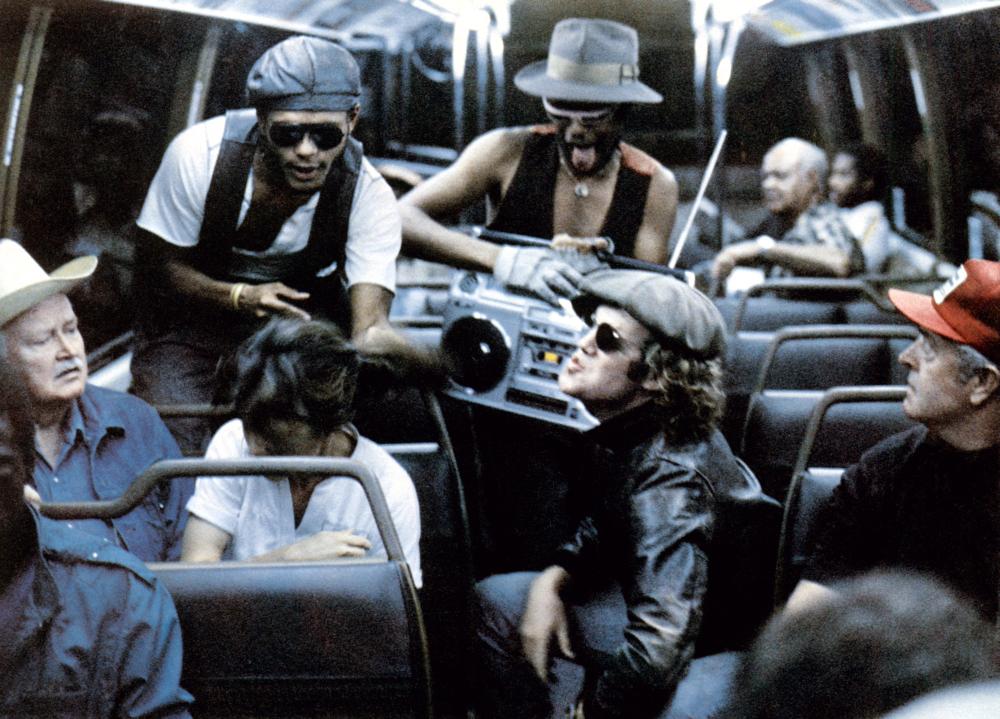 In the first of a few consecutive incredible coincidences, Paul finds one of the gang members on the streets and tails him and his shitbird friends into a deserted, run-down old hotel, where they’re making a drug deal. After shooting down his friend and letting the other two dudes go, we have easily on of the top five awesomely badass moments in action film history.

That’s way underselling this. This is one of the greatest moments ever put to film, period. Celluloid was developed so that one day, maybe by mistake even, a moment this powerful could be captured on film.

Next night, Bronson is out and about and guess what? He stumbles upon a rape. In the most incredibly impossible coincidence since last night’s, one of these rape dudes happens to be a member of the original gang too! He and two of his friends in this new rape gang are all shot dead in spectacular Bronson fashion. The woman who he saves, and her husband are so impressed by this triple homicide that they refuse to give the cops any info about Kersey. When pressed, the husband yells out “He was a good citizen, that’s what he was! Where were you guys? HANDING OUT PARKING TICKETS?” That’s right; fuck the police dude! The cops are absolutely fucking useless in this film, and of course they are, because they’re law enforcement in an action film. The only justice that matters is crazed vigilante justice.

Then there are some silly plot points where Detective Ochoa (the detective from NYC who was after him in the first film) comes out to LA to help the investigation. He adds next to nothing, but he does inform Jill Ireland’s character that her boyfriend is a vigilante. She confronts Paul, who lies to her and tells her it’s untrue. She believes him, because really, what woman wouldn’t believe any and everything Bronson told her? There’s really no point to any of this, I suppose this was put in the movie to appease people who foolishly felt that the film needed more than just 90 minutes of Bronson killing scumbags.

He goes out again, and wouldn’t you know, Kersey runs into the last three remaining gang members in a park, while they’re break dancing to the sounds of Jimmy Page’s awesome soundtrack. Instead of just killing them on the spot, he trails them while they go buy some guns from an arms dealer who’s wearing a purple satin shirt and rainbow suspenders, which was the style at the time. Detective Ochoa is also following Bronson following the gang, is spotted, which starts a massive shootout (in probably the best scene in the film). One of the characters, played by Laurence Fishburne in his first and arguably best role, grabs a boombox to cover his face because he apparently believed that boombox would stop a bullet from hitting him in the head. SPOILER ALERT: A boombox will not stop a bullet from hitting you in the head. Everyone else is shot dead, except for one last punk, who was named Nirvana. He escapes.

This Nirvana was one tough dude — in the film he survived four encounters with Paul Kersey, which has got to be a record. Bronson ends up finding out where he lives, and while he’s not able to shoot him, he does scare him out of his apartment into the waiting arms of the police. It takes a like a dozen cops to take him down. Really, he throws them around like he’s the Hulk or something. Because the cops are useless.

When this dude gets to court, he’s found guilty of at least two murders, two rapes, not to mention being involved with major drugs and buying illegal guns. So, they’re going to throw the book at him, right? Nope. As it turns out, he was on PCP, so the judge decides he just needs treatment and then he can be released back into society. Totally a realistic scenario. Lousy Democrats…. 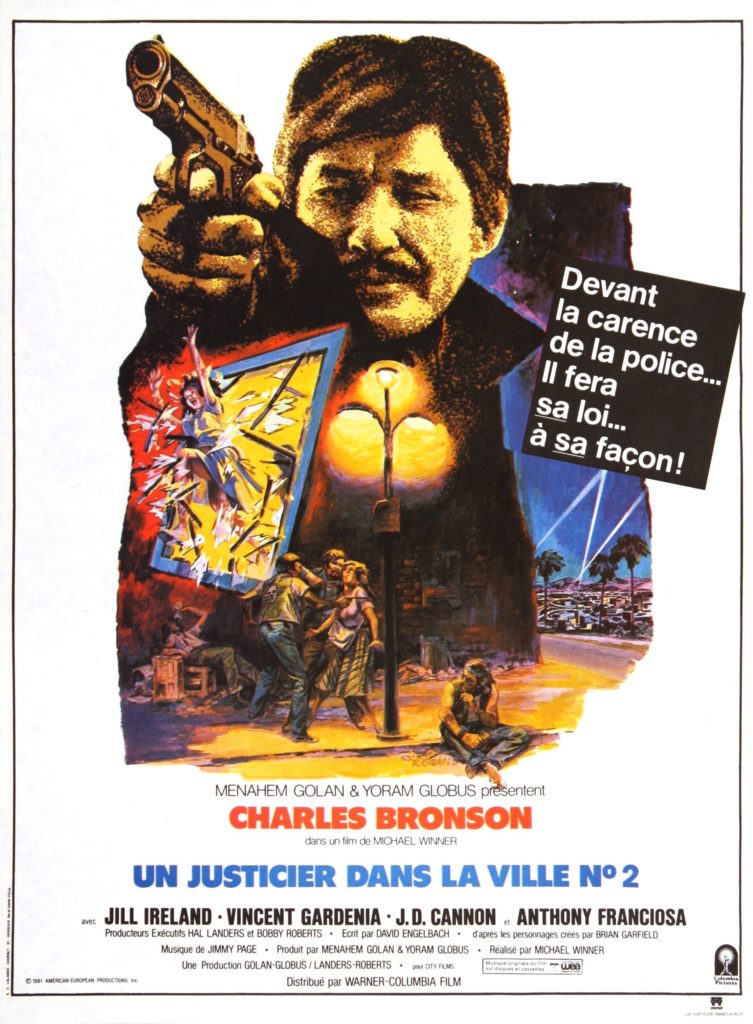 That’s all right. Kersey ends up going undercover to the rehab facility Nirvana is sent to. He fakes his way into a session with Nirvana and he ends up getting into an actual fight with this dude (one of the few actual fistfights in the DEATH WISH films — usually Bronson just shoots everyone). In one of the best deaths in the franchise, Nirvana ends up getting electrocuted. A security officer at the hospital catches Kersey dead to rights, but the officer feels for Paul and lets him go.

So, Kersey’s in the clear. It turns out his girlfriend found out he’s the vigilante; she dumps him, but doesn’t turn him in. As the film ends, Bronson is invited to go to dinner with some friends from work next week. They ask, “Are you sure you’ll be free?” Kersey responds with, “What else would I be doing?” — which kind of rules, really. It’s almost like a Marvel movie, letting you know there’s plenty more revenge coming between now and whenever this franchise becomes unprofitable. 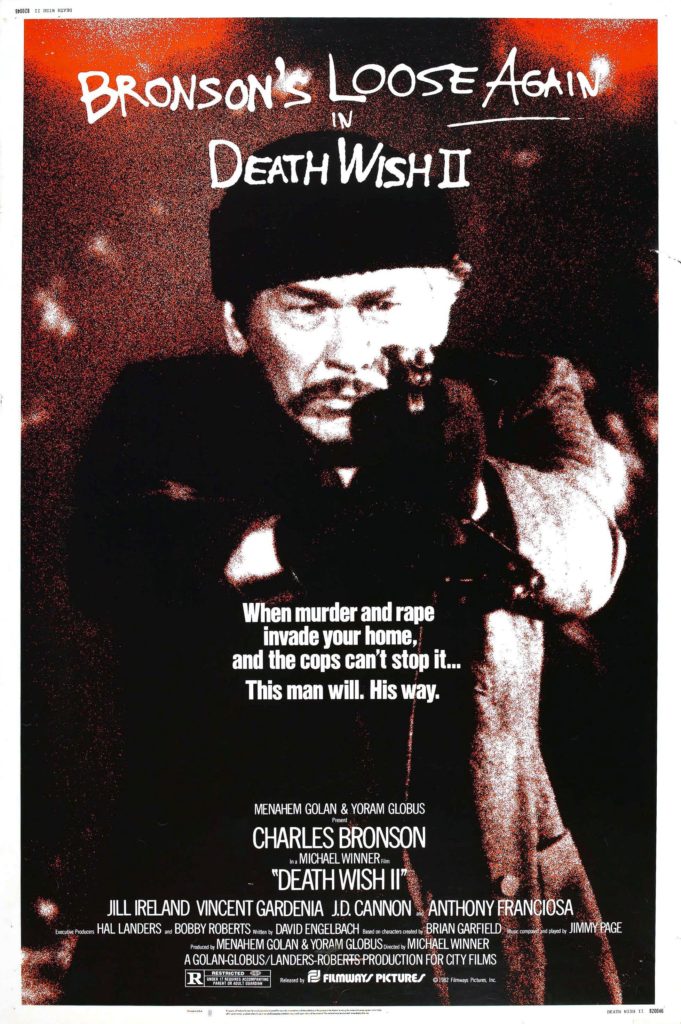 So yeah, DEATH WISH 2 is basically a nastier remake of the first film, and the rape scenes are horrible, but it’s still fucking awesome. While early ’80s LA isn’t as cool as ’70s NYC, the over the top seedy nature in which it’s presented captures a sleazy vibe of a troubled city. Director Michael Winner fired all the extras and pro actors who were supposed to be in the background and just gave money to all the homeless and streetpunks they could find in early 80’s LA and shot the scenes with them, which really adds to film. For the music nerds, DEATH WISH 2 is like if after Penelope Spheeris filmed the first DECLINE OF WESTERN CIVILIZATION film (you know, the punk rock one with X, the Germs, and Fear), she just let Bronson shoot all the bands. Which would have fucking ruled too. The film also moves along a little better then the original, and no matter how unrealistic Kersey finding the original gang so quickly was, it’s much more satisfying watching him shoot the dudes who killed his daughter then just shooting a bunch of random muggers. This film would be much more fondly remembered had it not been for the rape scenes, and the fact that the next film in the franchise was one of the top films in cinema history.