Every other week with FEAR CANDY, Daily Grindhouse will showcase a podcast episode that dives into our kind of movies; the scary, the gory, the creepy, the bloody, and the just plain weird…

The SATURDAY NIGHT MOVIE SLEEPOVERS podcast features Dion Baia and J. Blake (author of SCORED TO DEATH: CONVERSATIONS WITH SOME OF HORROR’S GREATEST COMPOSERS) discussing at length some of their favorite films on a bi-weekly basis. Generally, the movies showcased on the podcast will hold a sense of nostalgia for listeners of a certain age, focusing on films released in the ‘80s (or films that perhaps gained a second life running on cable during the Reagan-era). These “sleepover classics” are those movies that you’d stay up all night watching, inhaling pizza and Jolt cola when you were 11. In the episode released June 17th, Baia and Blake discuss at length Dario Argento’s DEEP RED.

DEEP RED a.k.a. PROFONDO FONDO a.k.a. THE HATCHET MURDERS — released in 1975 — is arguably Argento’s most famous (and most commercially successful work). One of the joys of the SNMS podcast is the conversational tone of the show with the hosts—who have been friends since film school—bringing copious notes and research to table, trivia, and personal anecdotes about how the films they discuss impacted their lives, which is sure to invest even the most casual Argento fan. If you love movies, you’ll be able to relate to the hosts. One of the more interesting bits in this episode is when Blake and Baia explain the social element of going to Italian cinemas in the ‘60s and 70’s, and how it impacted the pacing of the giallo films that were so popular at the time. It inspired this writer to go back and give DEEP RED another look; the last time I watched it with a group of friends one October, a certain guest wondered aloud as to “who’s the killer, is he the killer” for the majority of the films runtime. 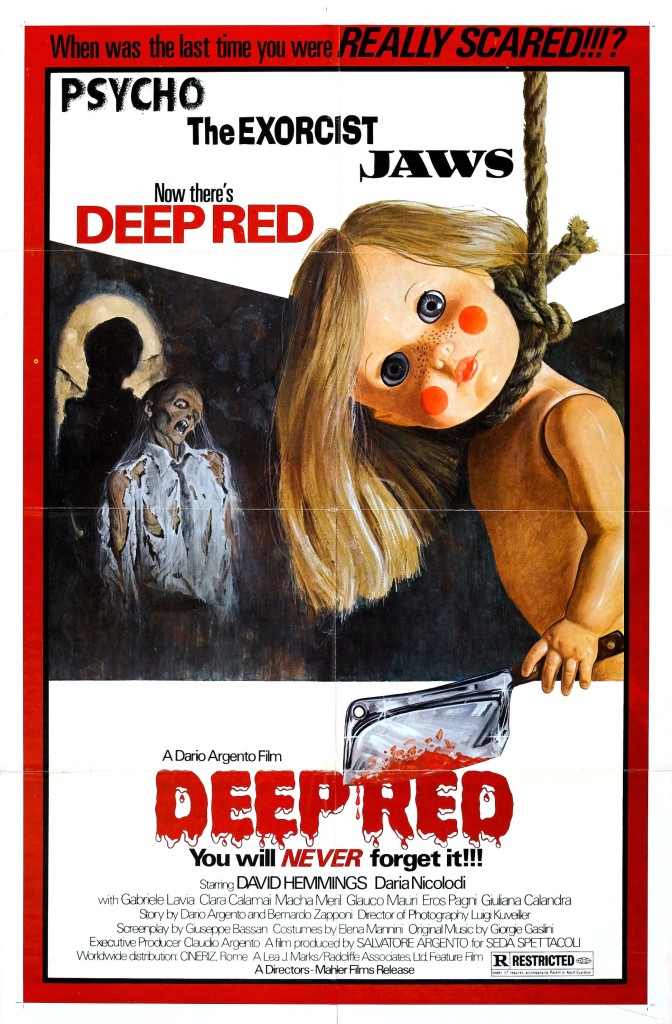 At just about two hours, this is indeed a super-sized episode of SATURDAY NIGHT MOVIE SLEEPOVERS, but it’ll fly by like a night of talking about your favorite movies with friends.