I am sure there will be those who disagree with me, but I think the majority of Werner Herzog’s fans and admirers will admit that, overall, his documentaries are superior to his narrative films. But what I always have and always will enjoy about Herzog’s narrative features are how damn goofy they can go at the drop of a hat. There is a deadpan hilarity even to moments in NOSFERATU THE VAMPYRE, FITZCARRALDO, and AGUIRRE, THE WRATH OF GOD that seem to come out of nowhere. But I have always believed that Herzog enjoys getting art house audiences to take his films seriously and then smack them upside the head with a little silliness. That feels like what is happening in much of SALT AND FIRE.

Ostensibly an eco-thriller, the film—like almost every Herzog film—is more about the fascinating beauty and terror of the natural world and the fraught relationship humans have with it.

Matt Riley (Michael Shannon) is the CEO of a multinational company that accidentally created an environmental disaster in Bolivia when they diverted two rivers for an irrigation project. A once thriving lake has been turned into a massive desert of a salt flat that threatens the survival of all species within its proximity. Riley kidnaps a team of scientists sent by the United Nations to study the disaster. While he is cordial, he is also clearly unbalanced. What he wants with the scientists is a close-kept secret, but he has a large number of men with automatic weapons backing him up at all times. Plus, this is a character played by Michael Shannon, so you know he is going to go completely off his rocker at some point. 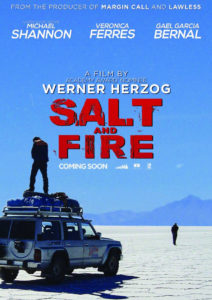 Despite that description, there are not a lot of thrills or suspense in SALT AND FIRE. That is not due to poor filmmaking, it is simply that Herzog uses a thriller setup to create a situation where Riley and the lead scientist (Veronica Ferres) engage in lengthy dialogue exchanges that sound a lot like Herzog’s many pontifications on the terror of nature and how art depends on the perspective of the viewer. Some of these conversations seem sincere as the film attacks the environmental devastation caused by corporations only concerned with greater profits. Other conversations veer into bizarre comedic territory, usually courtesy of Riley’s right-hand man (real life physicist Lawrence Krauss) who is prone to theorizing that if aliens ever did come to Earth, they would use the salt flats as a landing spot (and be ready for his response to why he is in a wheelchair).

Beyond the game of trying to determine when the film is being sincere and when Herzog is having fun with the audience, SALT AND FIRE is worth watching just for its presentation of Bolivia’s Uyuni Salt Flats. Herzog—ever the documentarian, even when making a narrative film—captures the beauty and horror of the desolate location with his camera with more immediacy than the numerous conversations that the characters have about it. He even manages to have fun with the lack of perspective that the perfectly flat location provides. But honestly, when does Herzog ever seem to not be having at least a little bit of fun?