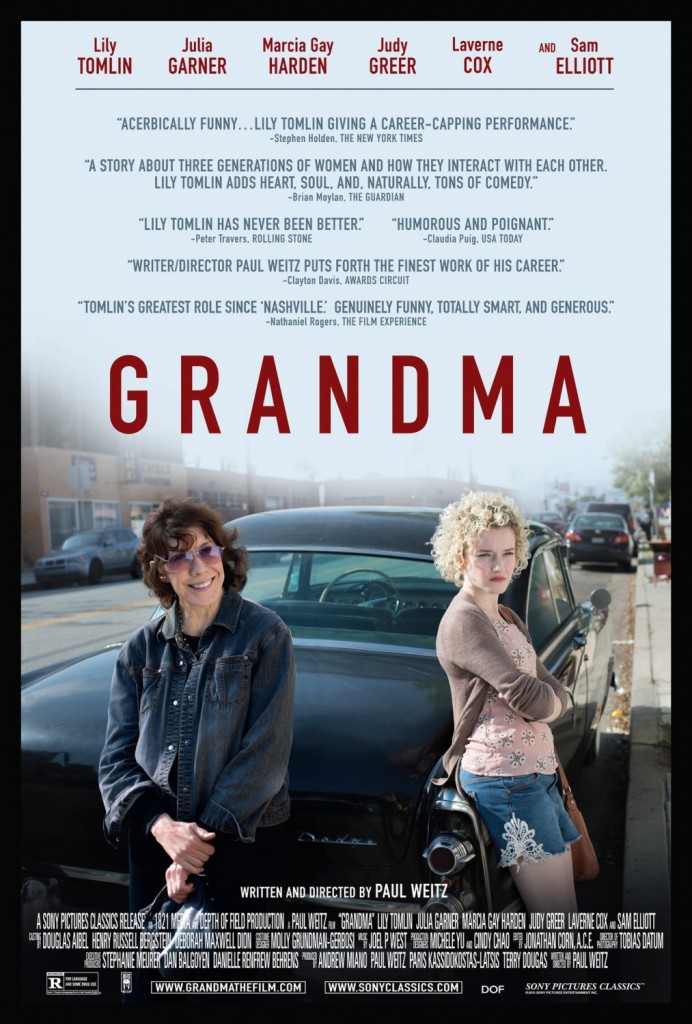 Paul Weitz’s GRANDMA is a cutting emotional road movie wrapped up in a comedy package. The premise is simple — Granddaughter asks Grandmother for help upon discovering her unplanned pregnancy — but Lily Tomlin’s outspoken character is hardly uncomplicated. Fundamentally, this is about three generations of women and the choices that they have made, and will continue to make, in their lives.

We begin as Elle (Tomlin) is breaking off her four-month relationship with girlfriend Olivia (Judy Greer). We catch ourselves in the middle of their fight as Elle, still grieving after the death of her long-term partner Vi less than two years earlier, abruptly ends the relationship. “You’re just a footnote,” she cruelly tells Olivia, in a moment that is as hurtful as it is transparent: Elle would rather do the rejecting now than risk her younger lover’s abandonment later down the line. 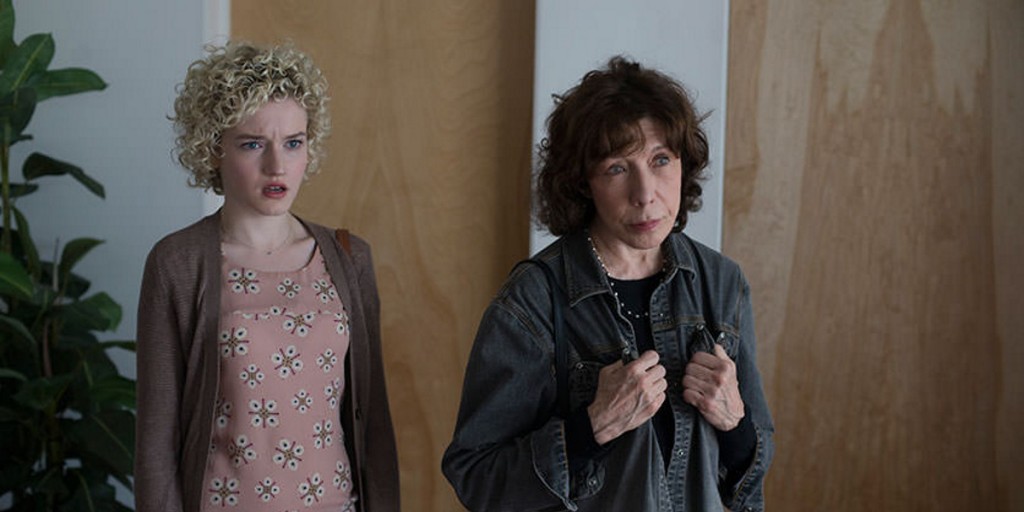 As Olivia leaves, Elle’s granddaughter Sage (Julia Garner) arrives seeking help: she is pregnant and needs over $600 for an abortion she has scheduled for that afternoon. She does not want to ask her mother, the highly caffeinated, treadmill-desk using, overstrung businesswoman Judy (Marcia Gay Harden), because “she wouldn’t understand”. The problem is that Elle has no money after paying off all her debts and cutting up her credit cards (“I’m transmogrifying my life into art”). So begins a literal and personal road trip across Los Angeles in Vi’s beloved Black Dodge Charger (kept, covered with a dust-sheet, and treasured as a reminder of a life now gone) to acquire the money. Faces from the past are revisited, old resentments and grudges are dug up again, and old arguments are reignited. Some of these moments are very funny, while others are bluntly tragic and moving. This odyssey culminates at the home of Elle’s old acquaintance Karl (a flawless Sam Elliott).

Karl’s life is the complete opposite of Elle’s bohemian lifestyle: a gorgeous home, a well-tended garden where he grows his own produce, sideboards heaving with masses of family photographs that proudly display the faces of his many grandchildren from four marriages. This is a calm existence that crashes against Elle’s bohemian disorganisation and offers a glimpse of what could have been between the two of them thirty years earlier. The spark is still there, and he obligingly offers to lend them the money until he realises why it is required. It is here that the tone changes from comedy to pathos, as repressed emotions erupt between the two of them. It’s a powerful scene, a standout moment in the film, and it plays out beautifully. 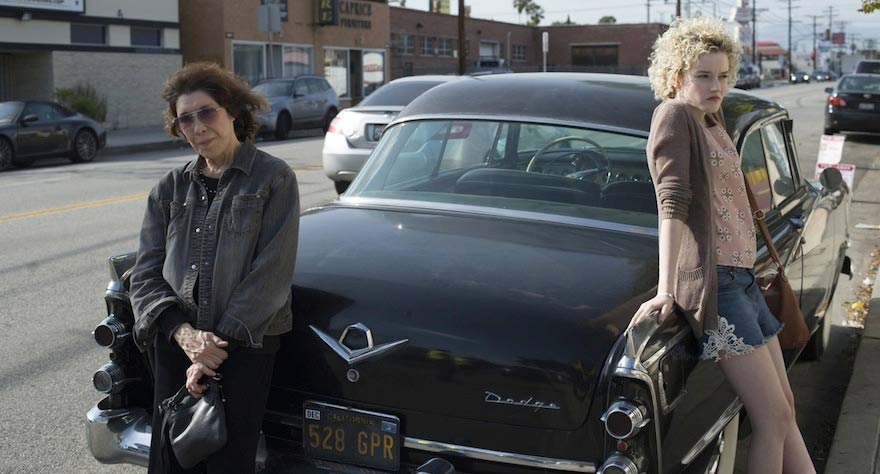 When the realisation dawns that Judy may be the only option, we see the three women together for the first time and understand the reasons for their clash. As Judy barks and orders her PAs around with the same skill and sarcastic tongue as her mother, we see them as essentially the same person, who have taken very different life paths; who have chosen what they believed to be the better lifestyle for themselves and their child. Garner may be the newcomer in the mix, but she more than manages to hold her own against the formidable forces of Tomlin and Harden.

Weitz formed the character of Elle in 2013 when he first worked with Tomlin on ADMISSION, and wrote the script with her voice in mind. You cannot picture anybody else in the role of Elle: a 1970s has-been poet who has never quite left the beat generation, as she alternates between violence (when confronting Sage’s ex) to melancholy (missing her late partner). Yet as much as this is Tomlin’s vehicle, all the characters have ample opportunity to shine and you yearn for more scenes (and films) with her and Elliot.

To call GRANDMA a ‘little film’ may sound derogatory, but at barely eighty minutes long, that’s exactly what it is — a bittersweet gem that deals with major issues and hefty subjects sensitively, elegantly, and with complete dignity. It’s a wonderful film, one that will delight as much as it devastates.