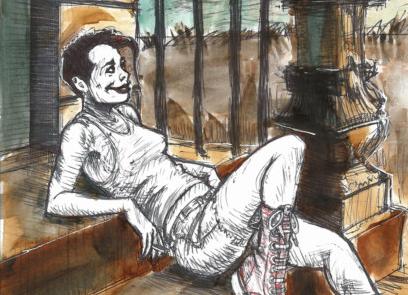 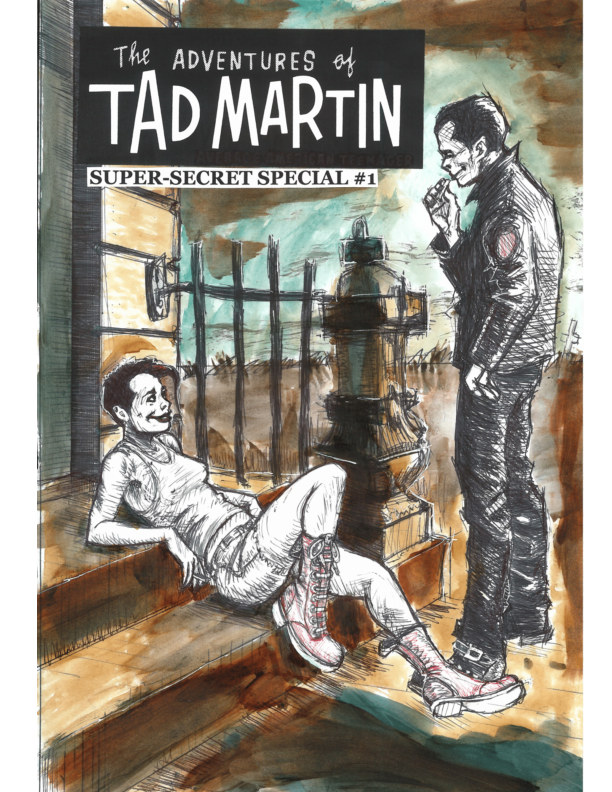 Not as long a while as the gap — no, make that gulf — between Casanova Frankenstein’s The Adventures Of Tad Martin #5 and The Adventures Of Tad Martin #sicksicksix, a book that was literally a couple of decades in the making, but still — four or five years, by my count, is a pretty long wait. Still, as always with The Cartoonist Formerly Known As Al Frank, the wait has proven to be more than worth it.

That being said, in order to fully appreciate Frankenstein’s latest, entitled The Adventures Of Tad Martin Super-Secret Special #1, you have to be a bit of a “process-lover” — or, perhaps more accurately, a “progress lover,” as in “work in.” This is no place for fans of the polished, the refined, the sanitized — this is the straight dope, right from our guy Cassie’s subconscious to his pens and brushes to the page. A wordless channeling of pure nihilism — and not the cheap, rage-fueled nihilism of youth, but the considered, soul-deep nihilism of someone who knows damn well this is a fallen world but is nevertheless, perhaps paradoxically (and perhaps not), determined to enjoy the right straight down. 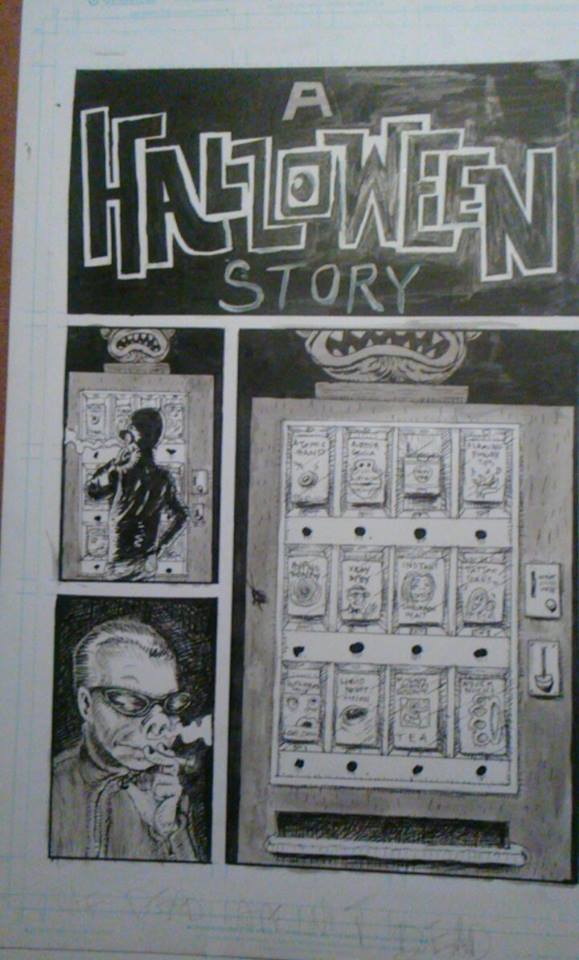 A Halloween party from hell is the setting, but more than that, it’s also a springboard — into the “world according to Tad” that those of us who’ve been following its fitful starts, stops, and continuations know well, sure, but there’s something underneath the full-time attitude, the black shades at night, the muscle cars, the old-school speed and bottom-shelf booze. Always master of his circumstances or at the very least acting the part, the phantasmagoria of ethereal depravity that Tad is subsumed by here is something altogether more dangerous, altogether more consequential, altogether more in general than even “Mr. Too Cool For School” can pretend doesn’t faze him. The game’s the same, but whatever is “playing” Tad here is playing for keeps.

This is exciting stuff — narratively, conceptually, maybe even theoretically — but you’ve gotta show up prepared to do a good deal of the “heavy lifting” yourself. Incongruous events collide against each other and propel the silent story “forward,” absolutely — but not only. As the shit swirls and spirals and spasms, there’s a sense that everything is happening in an ever-present “now” where prosaic notions such as linear time are left back not so much in the dust, but on the puke-encrusted floor. You can power through the whole thing in ten minutes, granted — even allowing for a fairly detailed perusal of the vintage “Super Gifts And Gimmicks”-style ad pages clipped from forgotten Bronze Age comics — but if you find yourself transfixed for hours, don’t be surprised. The not-quite-ready-for-prime-time art shifts styles, for a start, but also realities with it, and as you go with the flow through these choppy waters, you’ll find yourself succumbing to a siren call, an alluring invitation to give up and in at once, to see the bottom of the barrel not as the finish line, but as the starting point to a chemically-induced race down deep — really fucking deep — past the infernal pit, past everlasting fire, past even the void of nothing and into — 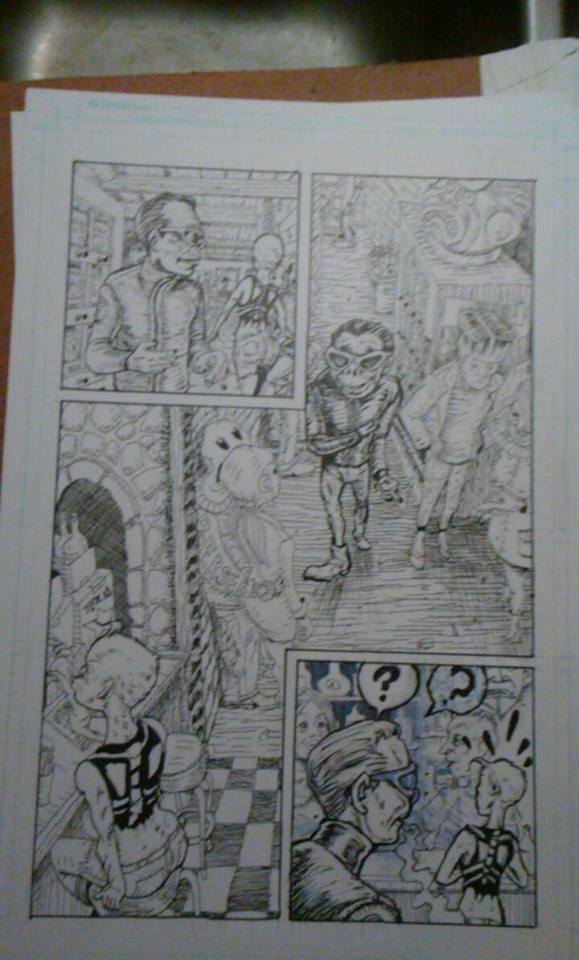 Shit, I dunno. The same place you started? Only nothing’s the same. Eyes wide open now, consensus reality stands revealed as the crock of utter nonsense you always figured it was, but the journey through complete uncertainty you’ve just been on? It’s made you more certain than ever. Maybe it’s all an illusion, this whole “everything we know” thing. Maybe it’s all a lie. Maybe it’s all a cruel joke. Maybe it’s all three. 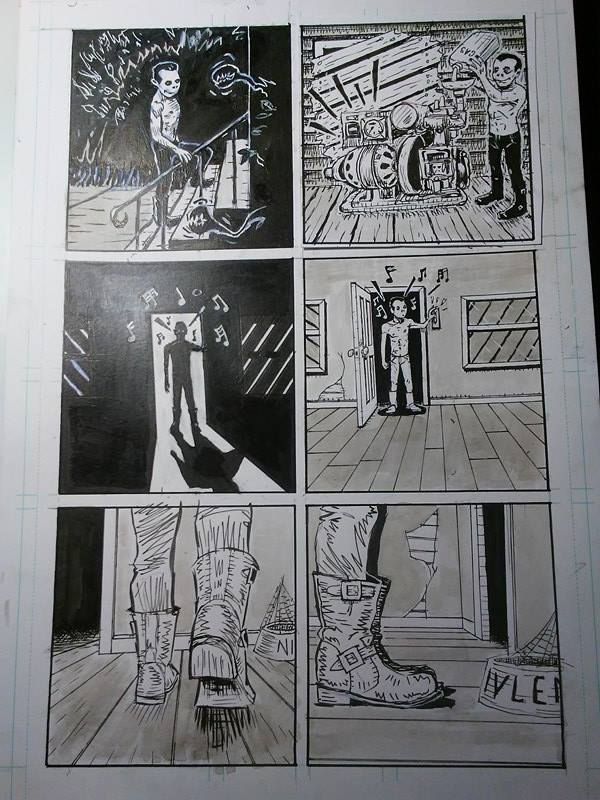 This is gonna be a big year for fans of Cassie Frankenstein. He’s got a new book coming out from Fantagraphics Underground in May, and an “official” new issue of Tad hits sometime after that from our friend Austin English at Domino Books. If either are even half as good as this — and, in my experience, this guy’s stuff actually only gets better — it’s going to be a no-brainer who the most significant cartoonist of 2019 well be come calendar’s end.

The Adventures Of Tad Martin Super-Secret Special #1 comes in an over-sized magazine format on uncharacteristically (for Frankenstein’s stuff, at any rate) slick, glossy paper. “Publisher” Blurb ships these out quick, so as soon as you part with your ten bucks, expect to have it in a matter of days. Even faster is buying it digitally for the bargain price of $5.50. Here’s a link!