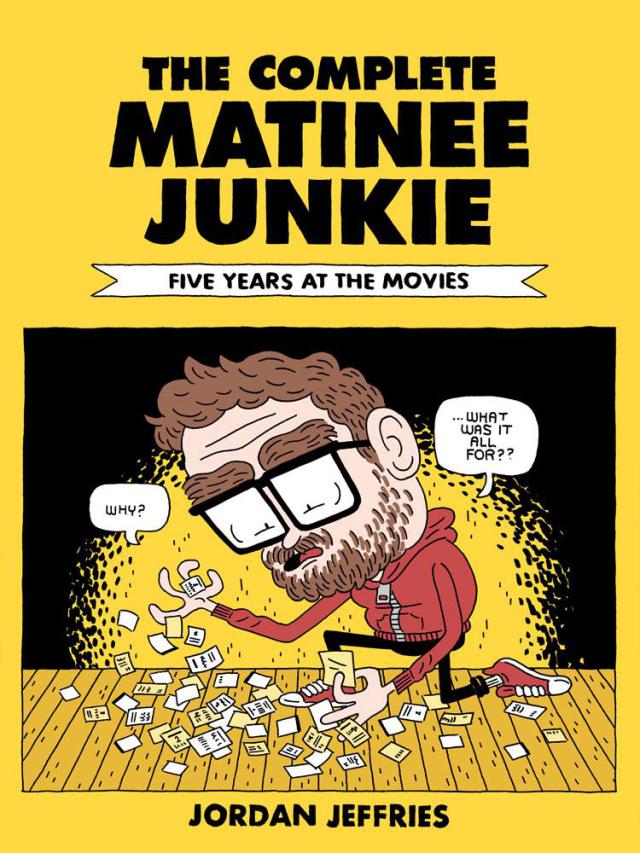 For more years than I care to admit, I was a compulsive moviegoer. I can kid myself and say it was all in pursuit of material for my Trash Film Guru blog (still a going concern, although now only updated a couple/few times a month as opposed to all the fucking time), but who do I think I’m fooling? The simple truth of the matter is that I was hooked on the entire experience of heading out to the theater, micro-analyzing whatever film I happened to be seeing, and then coming home and cranking out a review for the edification of whoever happened to be reading, as well as for myself. The bus or train ride home was where I’d get my thoughts together and begin to plan out both what I was going to say and how I was going to say it, and in time I began to realize how flat-out perverse it was that I looked forward to this “postgame” interregnum even more than I did the actual films themselves, by and large, and that it was becoming literally impossible for me to simply see a flick and enjoy it (or not) free from the compulsive need to break it down and “broadcast” my views on it.

In short, I was no longer in control of my ostensible “hobby” — it was controlling me.

All of which is to say that I understand exactly where New Jersey-based cartoonist Jordan Jeffries is coming from with his new book, The Complete Matinee Junkie: Five Years At The Movies, a massive, 288-page tome recently published by J.T. Yost’s Birdcage Bottom Books that collects all the Matinee Junkie single-issue “floppies” that Jeffries printed and distributed himself, as well as a full year’s worth of all-new material. All told, then, we’re talking about a time period that starts at the beginning of 2013 and runs all the way to the end of 2017. That’s a hell of a lot of movies — that provided the impetus for the creation of a hell of a lot of comics. 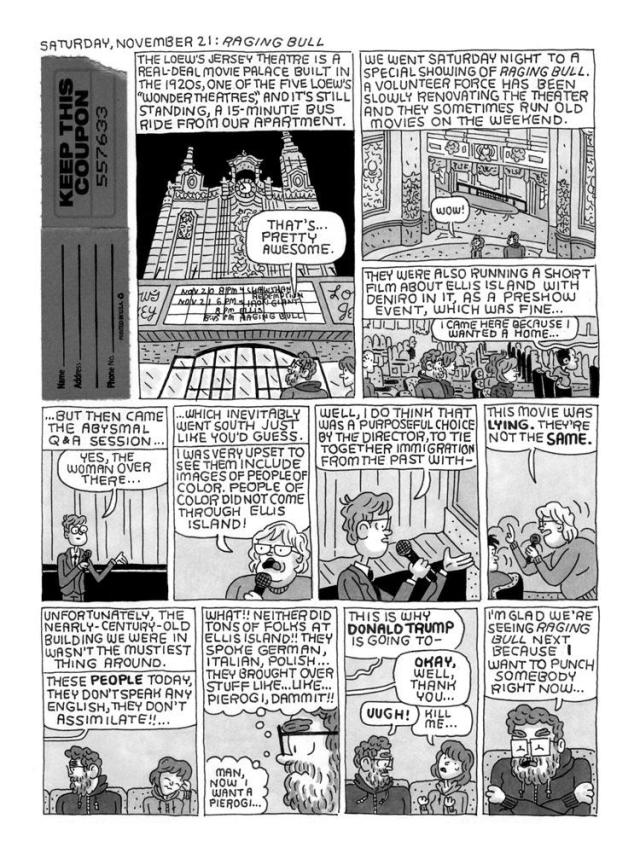 Don’t think, though, that what we’re dealing with here is a bunch of strips that are constructed for the purpose of specifically critiquing film, a la Rick Trembles’ superb Motion Picture Purgatory. Jeffries does give his thoughts on each flick he saw (as well as on each complete theater-going experience in general), but he also shows how they all fit into, and sometimes even informed, his life. He doesn’t shy away from admitting that his compulsive cinephiliac (is that even a word?) pursuits are a fool’s errand at best, a potential waste of his life at worst, but he presents this potential existential crisis with enough self-deprecating wit to make sure he avoids dull and pretentious navel-gazing. These are comics about movies and life — by a guy for whom movies are life. 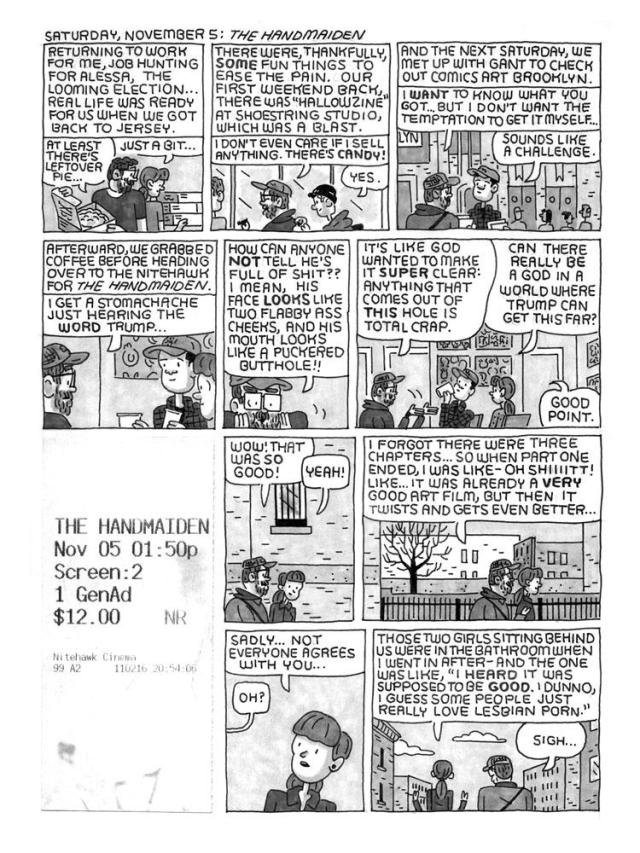 Jeffries is certainly a skilled cartoonist, make no mistake — his simple figure drawings are clean and inviting, with a strong emphasis on expressiveness — but it’s also fair to say that he’s not a particularly distinctive one. I don’t personally have much problem with that in this instance as I think material this specific can achieve a greater degree of universality than it might otherwise be expected to by hewing to an easily-digestible, dare I say even populist, style of presentation, but if you tend to dock a few points from a given comic because it looks vaguely like a lot of other comics, fair enough, as this really does come off as half Tom Gauld, half Fred Hembeck. 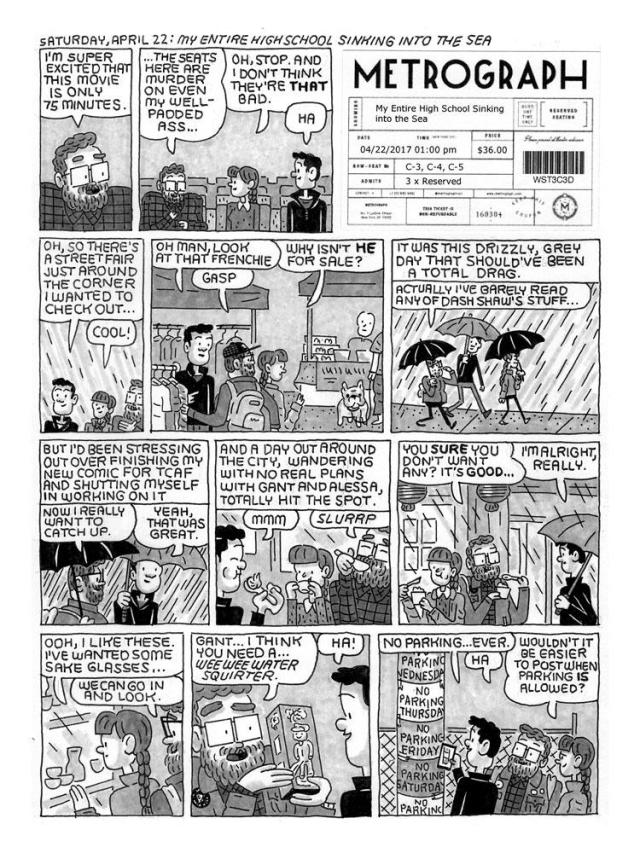 The book is also probably best consumed in small-ish doses, due to the sheer density of the material on offer: essentially we’re talking about a collection of “Sunday Funnies”-style single page strips here, each with its own beginning, middle, and end (that “end” pretty much always being a joke, or at least a vaguely humorous observation), so do pace yourself accordingly. I know it took me about a month to get through it from cover to cover (in between reading other stuff and, yeah, watching a number of movies myself), but the plus side to this means that you get a lot of reading material for your 20 bucks with this one. Maybe I’ve seen too many Hollywood productions, but from where I’m sitting (which is usually the balcony, if the theater happens to have one) that definitely qualifies as the proverbial “silver lining.”

One thing I think just about anyone who reads this will be hard-pressed not to agree with, though, is that Jeffries is a very informed viewer and critic. I may not agree with his on-the-fly appraisals of each film he sees, but he finds a way to hone in on one or two important “nuggets” about every one of them and work those into the broader context of what’s happening in his life. This may not be the most wholly original cartooning in the world, then, but it’s invariably smart, salient, and usually manages to avoid the easy pitfalls of cynicism and/or irony for its own sake.

Keeping in mind the caveats already expounded upon, then, I’m happy to give The Complete Matinee Junkie: Five Years At The Movies a solid “buy” recommendation to anyone who thinks this sounds like something that would probably be “up their alley.” It’s packed with enough witty and wry observation to satisfy cineastes from the casual to the committed, and who knows? You may even walk away from it with a few new movies to add to your “must-see” list. It can be ordered directly from the publisher HERE.