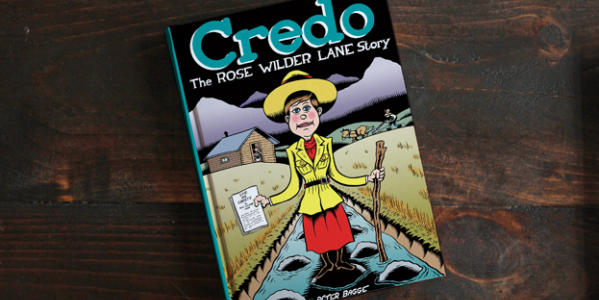 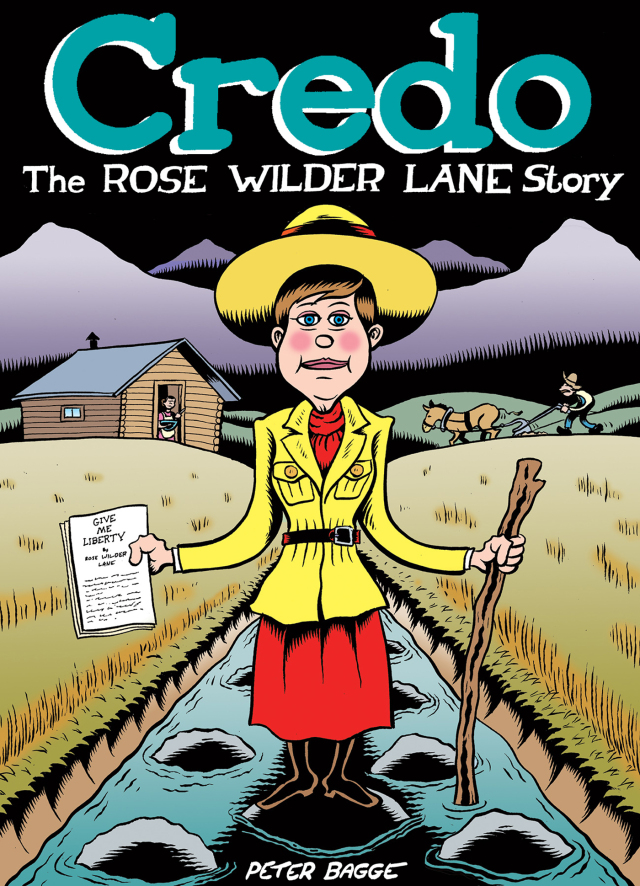 I’ll say one thing for the proverbial “third act” (actually, it might be more like the fourth or fifth) of Peter Bagge’s cartooning career — he picks some interesting subjects for his “graphic biographies.” From Margaret Sanger to Zora Neale Hurston to, now, Rose Wilder Lane, the women whose stories he relates have led full lives full of adventure, controversy, and accomplishment. Whether or not Bagge himself is the best person to be recounting their exploits is an open question — particularly in Hurston’s case — but it’s clear that he views all his de facto protagonists with a tremendous amount of respect, while fastidiously avoiding the easy trap that is dull, hero-worship hagiography.

So, yeah, that’s the good. Or part of it — the other big part being, of course, Bagge’s always-agreeable, “rubbery,” intrinsically eye-catching cartooning which, fair enough, hasn’t really changed or evolved since his Neat Stuff/Hate days, but nonetheless doesn’t feel or look tired or “played out.” He’s got something he does well, and proceeds to go about doing it. No shame in that.

What’s becoming painfully apparent, though, is that he’s creatively stalled out, and I offer as evidence for this assertion his most recent hardcover release from Drawn+Quarterly, Credo : The Rose Wilder Lane Story. 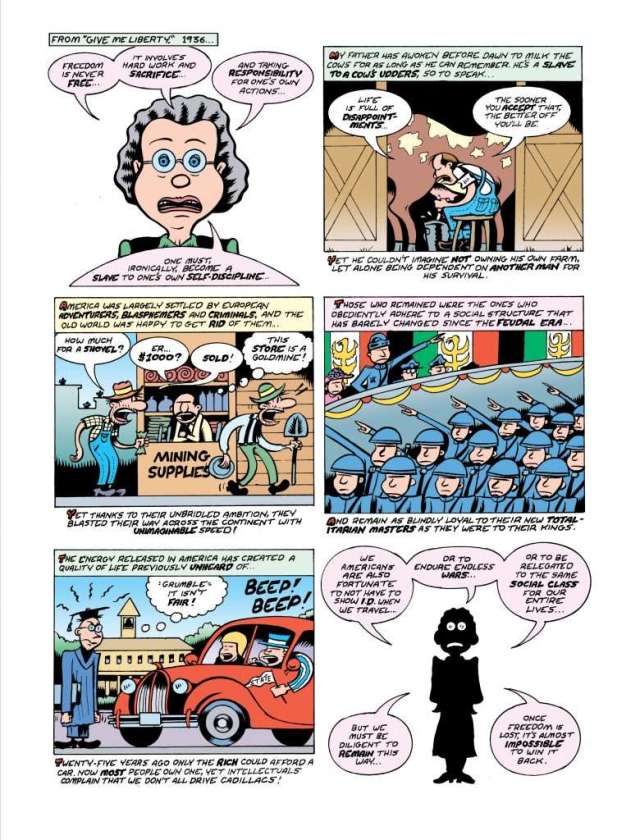 In the minds of many, Lane will forever be mentioned in conjunction with, perhaps even be consigned to a place within the shadow cast by, her “literary legend” mother, Laura Ingalls Wilder, but for those whose politics skew hard toward the libertarian, such as Bagge, she’s one of the most consequential thinkers in American history, a giant upon whose shoulders people like — I dunno, the Koch brothers and Ron Paul stand. If I were her, in other words, I’d be glad not to be around anymore.

Lane’s own achievements in literary fiction and popular biography are rather underplayed by Bagge in the pages of this strictly-formatted book (all three of Bagge’s cartoon biographies have the exact same page count), but her foundational libertarian tracts, as well as the experiences that gave direct rise to her point of view, are afforded plenty of time in the spotlight, and while that’s going to be very appealing to folks who came to know Bagge’s work through the pages of Reason magazine, it’s probably fair to say that the rest of us would rather know more about her travels through the Middle East than, say, her tutelage under notorious right-wing Saturday Evening Post editor Garet Garrett. Like fellow libertarian Chester Brown, it seems that Bagge’s storytelling choices show a cartoonist on the verge of being wholly subsumed within his own narrow obsessions. 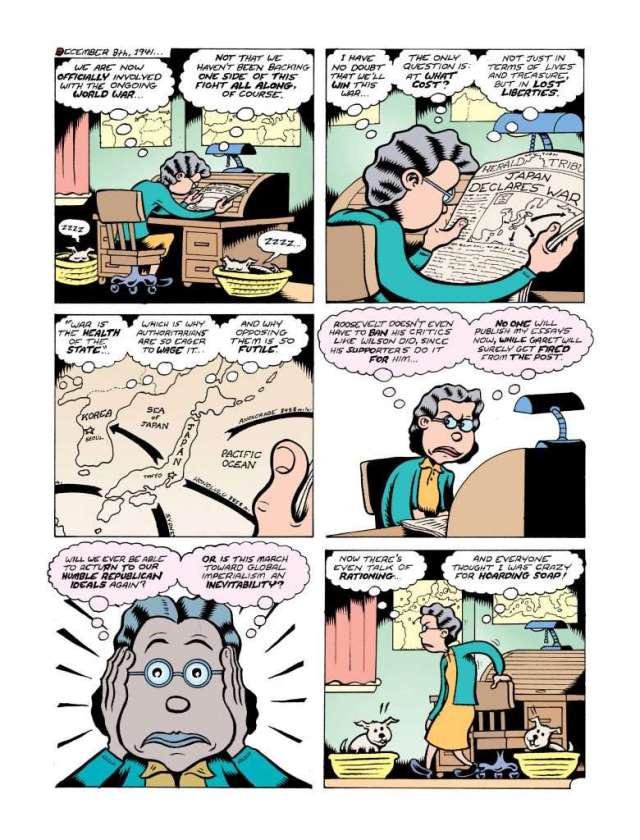 Those who haven’t swallowed the free market Kool-Aid might also find Bagge’s borderline-avoidance of one of American literature’s great mysteries — namely, how much of her mother’s work was actually be written by Lane — to be a source of frustration, as well, but I understand that his larger concern was drawing attention to the things that his subject unequivocally and absolutely did write, so I’m willing to give him a pass on that score. He gives hints as to what he thinks may have gone down, but draws no specific conclusions nor makes any bold assertions, and that seems entirely appropriate in the view of this critic. If others consider it a “dodge” of sorts on his part, though, I’ll be perfectly frank and state that I can understand that point of view even if I don’t agree with it. 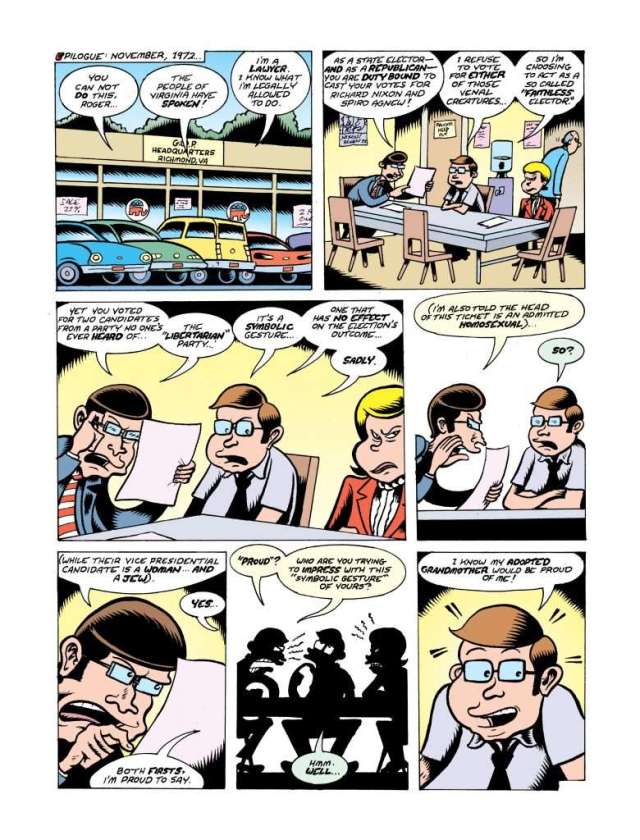 Which probably isn’t such a bad summation of this particular work on the whole. While Margaret Sanger and Zora Neale Hurston didn’t necessarily consider themselves libertarians as such, Lane did, and therefore there’s no sense that Bagge is trying to fit a square peg into his even-more-square philosophical hole here, but there’s an awful lot of preaching to the choir in this book. For a guy whose work used to have such mass appeal that’s an interesting development, but the trajectory of Bagge’s cartooning — hell, even the trajectory of these thematically-linked biographies — shows an artist whose concerns are becoming more insular and absolutist. A similar path led to the most interesting work of Ditko’s career, but it also topedoed Dave Sim, the aforementioned Chester Brown, and others.

The jury’s still out on whether or not a laser-focused Bagge will make better stuff or worse stuff than he used to, but my hope is that he’ll give the biography format a rest for awhile and tell us where he’s coming from and why, rather than using historical figures as mouthpieces and/or human shields for his worldview.