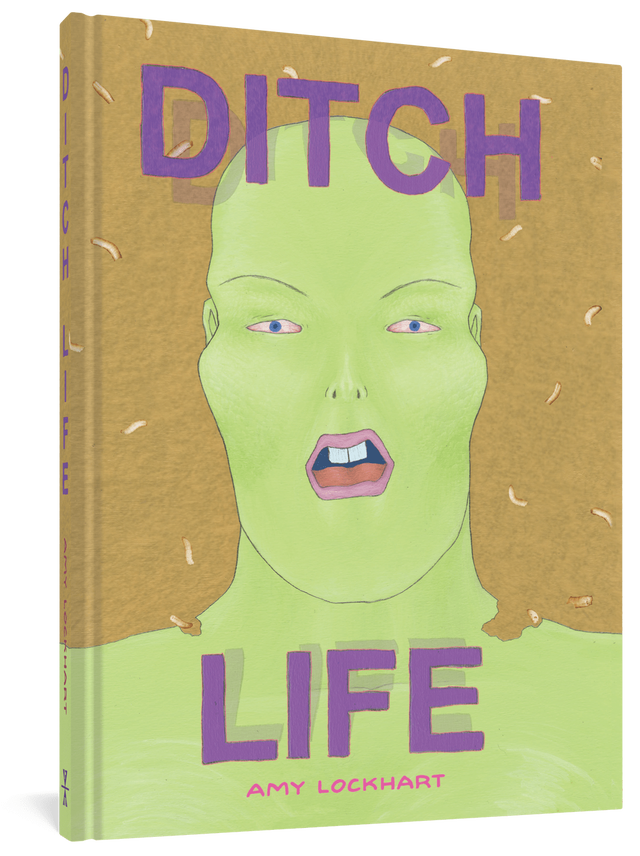 Understand that what I’m about to say is being applied to an imprint that’s published Greg Stump’s Disillusioned Illusions and Gerald Jablonski’s Farmer Ned’s Comics Barn, so yeah — when I “call out” Amy Lockhart’s Ditch Life as the weirdest comic to come out under the Fantagraphics Underground label? That’s no small feat right there, and means that Lockhart’s beaten out some utterly bizarre and well-nigh unclassifiable “opposition.”

At first glance, though, this pastel-hued artistic paean to what we’ll call, for lack of a more readily-available term, “stylish minimalism” only appears kind of weird — but the lack of any sort of descriptive blurb on the back (on the hardback, to be specific — this thing actually boasts some pretty nice production values), the bizarre character designs, the appearance of a fold-out “board game” titled “Females As Furniture” about 2/3 of the way through the book’s 104 pages — these are all hard and fast “catch ’em at a glance” clues that something far outside not only the ordinary, but the extraordinary, is going on here. And so it is. 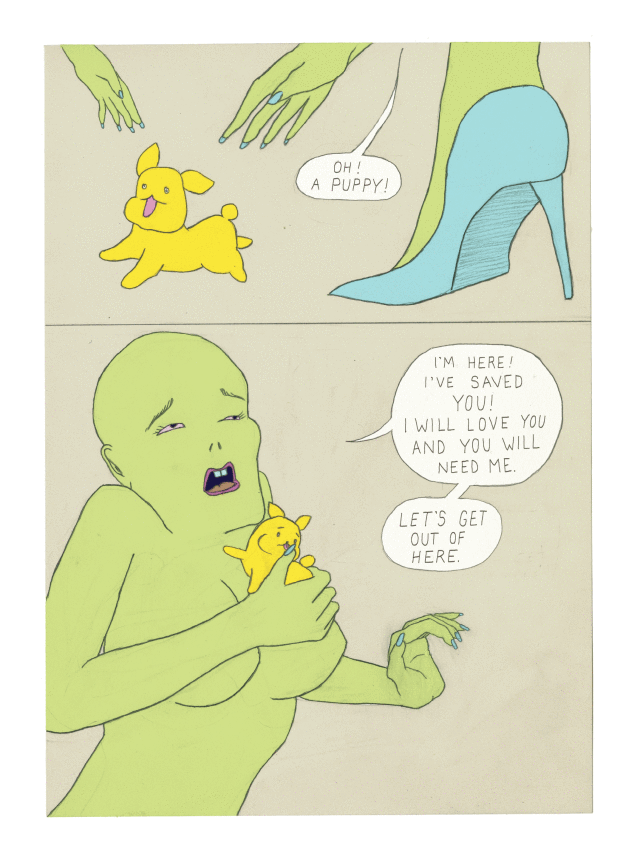 Barb and Mitch live in a ditch — she’s green, he’s mean — they get themselves a dog, but taking care of him’s a slog — he carves her up with scars, but she’s a plastic surgeon to the stars! And that’ll about do it for the rhyming, but really we’re just scratching the surface of a story that features such notable “attributes” as misogynistic internet trolls that really are trolls, houses disguised as shape-shifting pizza boxes, sentient boob jobs, and maggots raining down from the sky. Among other things.

Nut here’s the thing about those “other things,” though — they’re pretty, even disconcertingly, easy to relate to, and far more depressingly relevant than you’d guess from material this aesthetically, even conceptually, outlandish: Lockhart’s lean, mean story is, you see, an examination (it’s too “far out” to be labeled a “meditation”) on any number of topics ranging from sexism and incel “culture” to income inequality to gentrification and displacement to celebrity worship to bodily obsession and body horror to objectification of the “other” to — shit, just about every other problem plaguing America that’s been exacerbated tenfold here in the era of Trump. But hey — that doesn’t mean it’s not funny. 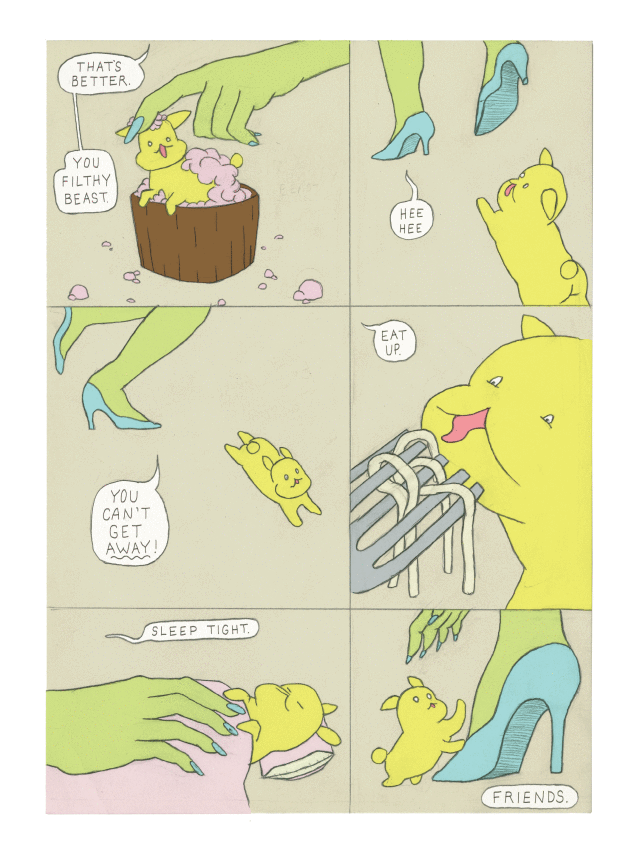 Fair warning, though: A lot of the laughs it engenders are of the “you’ll feel guilty about it later” variety. The violence, for instance, mitigated throughout the book — mostly upon the hapless Barb — is frequently shocking both for its severity and casualness, as well as for how decidedly personal it is. If you’re comfortable with being uncomfortable, then that shouldn’t present too great an obstacle, but if you’re looking for some “relief” to be appended to the “comic,” well — it’s in short supply here, and by design at that. Which, again, marks this as being a work far more in tune with the current state of consensus reality than one would guess by merely leafing through it. 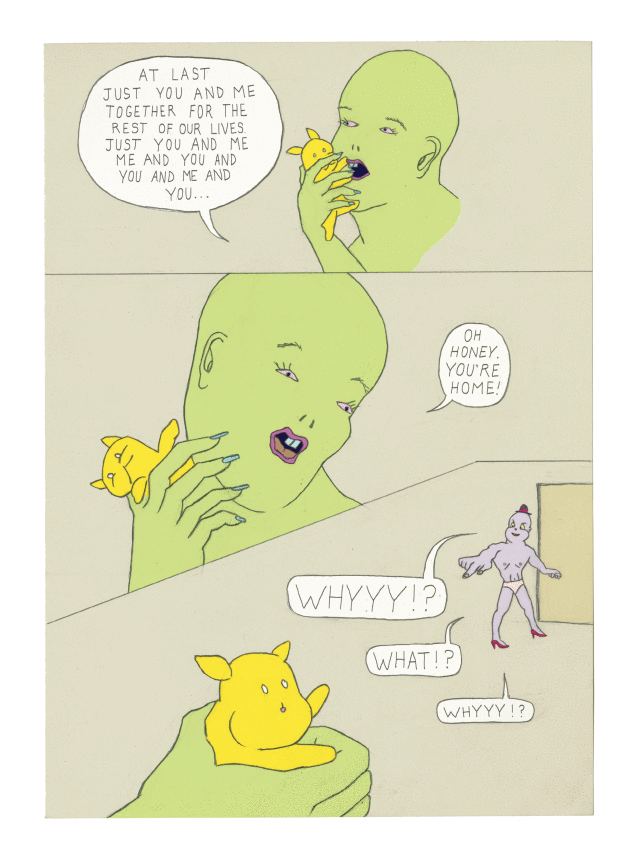 Still, for my own part, I’ve gotta say what the hell — I’m willing to classify all that as a “good” thing, even if it comes with a basket-load of qualifiers attached for readers with more well-developed moral compasses. Lockhart herself is decidedly not in the business of placating anybody, though, and that means this is legitimately armed and even dangerous stuff, with its barbs aimed at entirely deserving targets. Of course it’s a satirical work — hell, it’s satirical in the extreme — but it’s the kind of hard-edged satire we so desperately need, specifically: The sort that isn’t afraid to  get its hands dirty and doesn’t shy away from being genuinely confrontational as opposed to settling for the merely “controversial.” We live in awfully strange times, after all (emphasis on the “awful”), and if an earnest, strident, and justifiably outraged reaction to that finds form and voice in a green-skinned, bald, torpedo-titted degenerate raging against the dying of the light, then hey — who am I to argue with that?