Home  ⁄  The Wire  ⁄  [GRINDHOUSE COMICS COLUMN] ‘A LONE DEER AT THE END OF THE WORLD’ BY D. BRADFORD GAMBLES 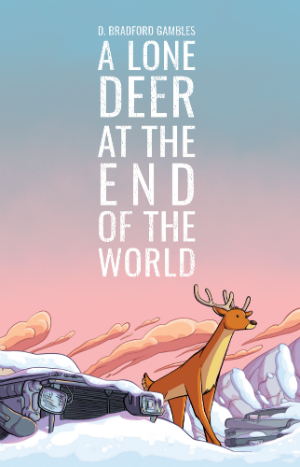 Here’s the thing: if I were an editor or publisher, and cartoonist D. Bradford Gambles submitted his new mini, A Lone Deer At The End Of The World, to me — I confess that I’d probably be tempted to reject it. The book’s just too obvious, I’d tell myself (and him). Too unsubtle. Too upfront with its message, perhaps to the detriment of its threadbare narrative. And you know what? I’d be right — but that doesn’t mean my choice to pass on it would be right.

Fortunately, J.T. Yost at Birdcage Bottom Books is a lot smarter than I am, he recognizes sheer artistry when he sees it, and he knows that no matter how overly-earnest the delivery, a message worth conveying is still worth conveying, and that when it’s rendered this beautifully — well, there is that old saying about the iron fist inside a velvet glove that comes to mind. 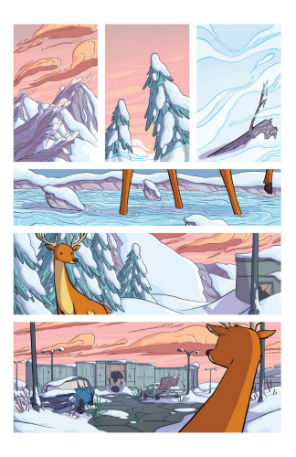 Anyway, to his credit, it’s not like Gambles is kidding anyone — in fact, he takes your agreement with his silent statements about consumerism and excess as a given, in much the same way that George A. Romero did in his legendary DAWN OF THE DEAD — and, like Romero, a post-apocalyptic shopping mall is where he sets his wordless polemic. That’s pretty much where the parallels stop, though. Even if I kept waiting for a zombie to shamble in from out of frame at some point.

For one thing, this comic is absolutely gorgeous — Gambles is a cartoonist of the highest technical skill and proficiency, his clean and precise lines immediately arresting the eye and his lush and sumptuous colors somehow tugging at the heart as effortlessly as they do the mind and the optic nerve. This ain’t no horror comic, in other words, even if its barren and frozen landscapes hint at an absolutely devastating apocalypse that has already come to pass. 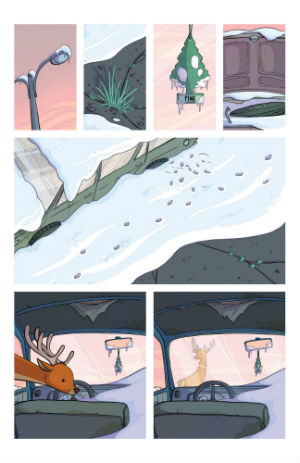 Another remarkable thing about Gambles’ comic — for a relatively short work, the pacing is remarkably slow and deliberate. That might stand to reason given we’re talking about a story that essentially boils down to a deer wandering through an abandoned mall, but the sheer amount of information contained within a relatively limited number of actual, narrative actions here is beyond striking and establishes a unique relationship with time that pervades every panel from start to finish. It would be a lie to say that a “whole lot happens” in these pages, but one thing’s for sure — a whole lot is said. Even if the proceedings are entirely silent. 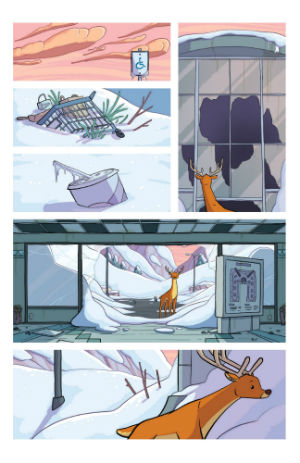 All that being said, I don’t pretend for a minute that A Lone Deer At The End Of The World isn’t very much a “your mileage may vary” comic. My earlier points about its obviousness and far-less-than-subtlety absolutely stand. But Gambles finds a way to use these apparent “shortcomings” to his benefit — and ours. This is deeply moving, deeply stirring, deeply contemplative stuff. And the only time I’ve ever been knocked out by a touch as light as a feather.